Tourism in the Balkans

Until recently, Theth was a virtually deserted village in the Albanian Alps. But life has returned with a hiking trail.

Ded Nika sits in front of his house with a group of hikers, pouring them glasses of his home-produced raki. The hikers are following the Peaks of the Balkans trail, which links Albania, Kosovo and Montenegro. Against a backdrop of the dramatic cliff faces of the Albanian Alps, they will be sleeping in Nika’s farmhouse in wooden beds he has built himself, drinking his raki and enjoying his wife Shpresa’s home cooking. If they ask, Nika will tell them that this idyllic village was all but deserted just 10 years ago. The young men had emigrated to Germany or Italy and the older men didn’t know how they could make a living. 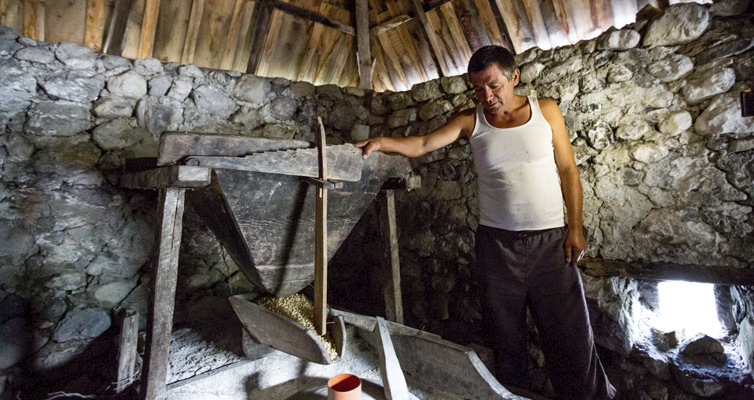 Ded Nika on his farm

Ded Nika is a strong, dark-haired 48-year-old. His wife looks after the garden, where she grows tomatoes, peppers, herbs, aubergines and cucumbers. Nika’s mother also lives with them. In 2011, when he started adapting the house for tourists, she was against the idea. It wasn’t that she didn’t want foreigners in the house, but rather that the tradition in the Albanian Alps is to offer hospitality without payment.

The inhabitants of Theth have long been caught between the desire to stay and the pressure to leave, their love of their home village and the need to earn money. Since 2014, Albania has been a candidate for accession to the European Union, and Germany supports the country in a range of areas. One of the priority areas of cooperation is creating opportunities for generating income in mountain villages. 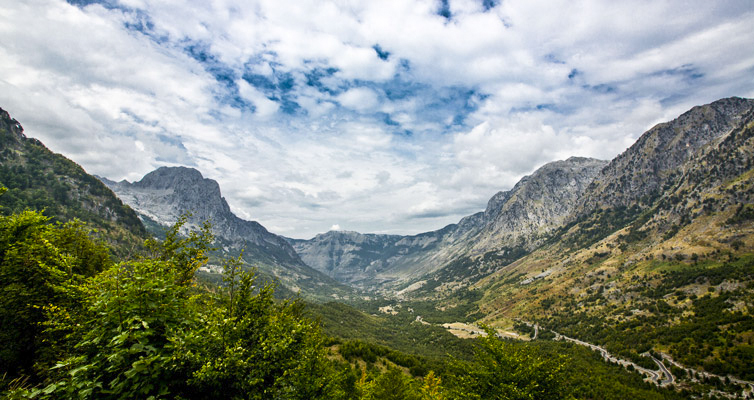 The hiking trail „Peaks of the Balkans is nearly 200 kilometres long and takes visitors through Albania, Kosovo and Montenegro.

As far back as 2006, GIZ launched a project to promote tourism and hiking in the Albanian Alps combined with support for local farmers in marketing their produce. Among the things they produce are honey, dairy products and, particularly, medicinal herbs. One of the outcomes of this initiative is the Peaks of the Balkans trail, which runs for almost 200 kilometres and offers opportunities to experience the spectacular scenery.

People are now returning to the village

The houses in Theth are spread out across a narrow valley surrounded by mountains. The village is accessible by just one dirt road. It takes five hours to reach the Albanian capital Tirana, and the country’s second-largest city, Shkodra, is two hours away. Theth now has a population of 370, with more returning year by year. Those who left because they had no prospects and no hope are now returning and building houses, restaurants and tourist accommodation. The village’s reputation as a jewel of the Albanian Alps is growing. 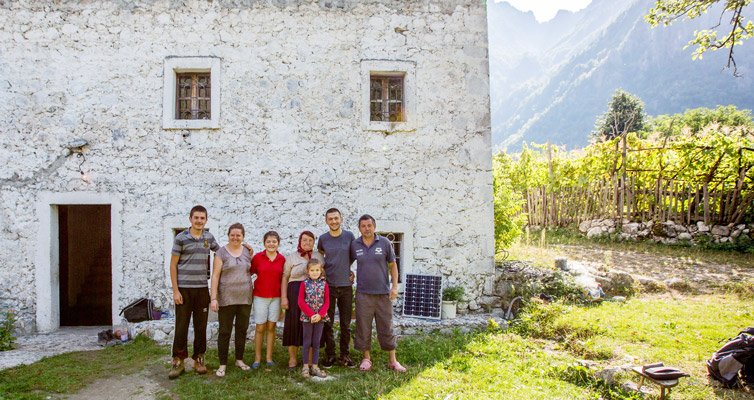 Ded Nika and his family

The houses in Theth are spread out across a narrow valley surrounded by mountains. The village is accessible by just one dirt road. It takes five hours to reach the Albanian capital Tirana, and the country’s second-largest city, Shkodra, is two hours away. Theth now has a population of 370, with more returning year by year. Those who left because they had no prospects and no hope are now returning and building houses, restaurants and tourist accommodation. The village’s reputation as a jewel of the Albanian Alps is growing.

Locals now divide time into ‘before tourism’ and ‘after tourism’. Before tourism arrived, Theth had virtually died. Ismail Beka, GIZ project manager based in Tirana, recalls visiting the village in ‘before tourism’ times. ‘One house in three was empty, and the shops were boarded up. There was no proper road, no doctor and nothing else to make life easier either,’ he recalls.

Life began to return to Theth in 2006. The University of Shkodra worked with GIZ to launch a competition on the theme of creating a future though tourism. Theth won the competition and, as Beka recalls, ‘The locals won us over with their willingness to embrace change. We could see the huge disparity between the area’s stunning natural beauty and the lack of prospects for the local people.’ In Ded Nika, Beka found someone willing to roll up his sleeves. And there was a lot to do. Nika recalls, ‘Our farms had no electricity or running water. The animals lived on the ground floor and we slept in the tiny rooms above.’ 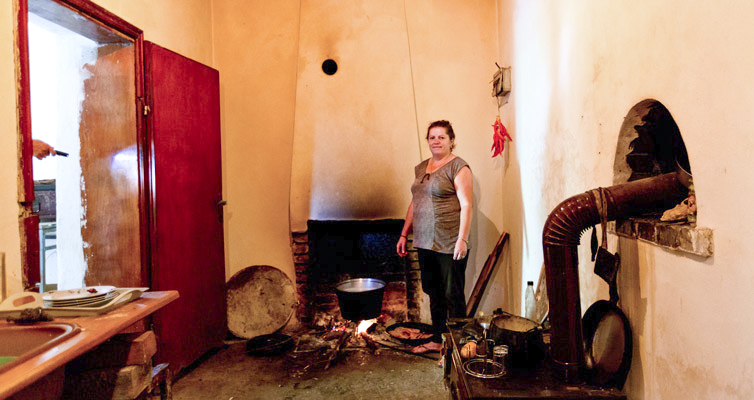 Ded Nika’s wife Shrezpa in the family’s home which is also a hostel now.

The project supplied nine families with construction materials worth EUR 2,000 to adapt their farms. They did all the work themselves. And it paid off: a few tourists started coming, then more and more. Now Theth receives around 30,000 visitors a year, and more than 25 families are earning a living from providing tourist accommodation.

A new shop, a school and buses

Pavlin Polia and his brother Nard are among those who have returned to Theth. They came back from Italy in 2010 and built a guesthouse with their own hands. Today, it’s considered the village’s top accommodation. They are deeply satisfied with their success after years as guest workers in Italy. ‘Coming back was the best decision we ever made,’ says Nard Polia. 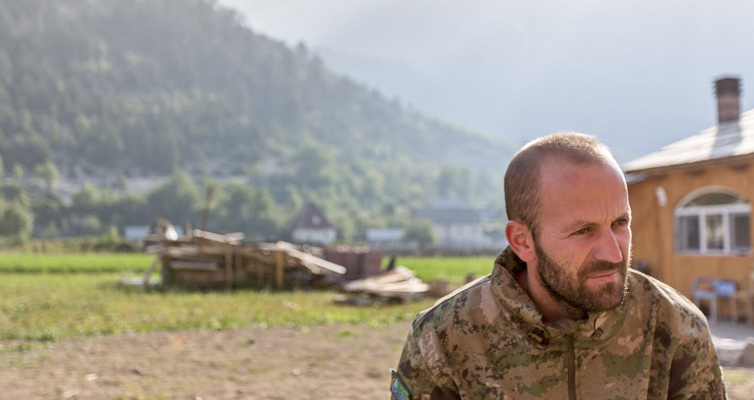 Nard Pola moved back to Theth from Italia.

Tourism has made life in Theth easier, too. The locals can afford to use the minibuses that collect tourists from Shkodra. The village now has a small shop, a clinic and a school. And a refuse collection service has recently started.

How many tourists can the valley take?

However, the very success of the tourism venture is now causing a dilemma for the village. Some locals want more tourists and more rooms – and the higher income they bring. Others, though, feel that Theth has reached the maximum number of visitors the valley can accommodate without losing its original character. Pavlin Polia argues, ‘The first tourists came here to enjoy nature and the simple life we have here. But now they want macchiato, spa facilities and soft beds.’ And now the Albanian Government has said it intends to build a tarmac road to the village to enable vehicles to reach the village in winter as well as summer. That is a step too far for Ded Nika, who doesn’t want a paved road. He’d prefer Theth to remain quiet and peaceful during the winter months.