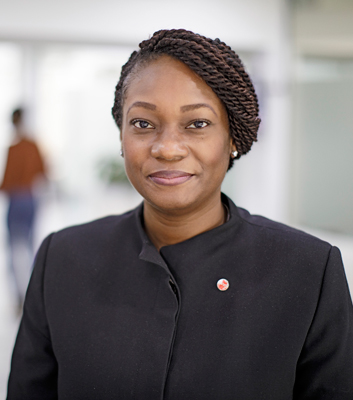 “Thousands of young entrepreneurs in Africa are ready, enthusiastic and in need of support. Mr Elumelu was himself only 26 when he became a branch manager in the 1980s, which was unheard of in those days. He went on to become chairman of one of the biggest banks in Nigeria and he’s always felt that his boss’ willingness to give a young person a chance is what changed his life. That’s what his foundation is all about – giving opportunities to the young by training, mentoring and funding aspiring entrepreneurs. In 2014 the foundation launched a new programme to support 10,000 young entrepreneurs across all 54 African countries and we’re already seeing the effect. In four years, we’ve trained 4,470 entrepreneurs and with GIZ’s support we’ve reached 210 this year that wouldn’t otherwise have been chosen. These people now have a chance to make their dreams a reality, transforming their own lives, as well as those of their families and communities. Many have amazing ideas but the infrastructure is simply not in place to support them. Mr Elumelu has coined the term Africapitalism, a philosophy that places the economic transformation of Africa in the hands of the private sector, which wasn’t traditionally seen as a key stakeholder in healing the economic condition of the continent. Forging links between the private sector, the government and development organisations is the key to creating sustainable wealth and the more startups we can support, the greater the domino effect. We’ve seen so many success stories, such as Mama Moni, a mobile money service that makes funds available to rural women at extremely low rates. It enables them to run small businesses and support their families. In the agriculture industry, young people are brimming with ideas to streamline the sector and dramatically improve efficiency, but they need help getting started. We want to make Africa a land of opportunity and building more partnerships with organisations like GIZ will help to make that a reality.”

A MARSHALL PLAN WITH AFRIKA