Sowing the seeds of success

In Chad, locals and refugees have to get by on very little. With seeds and training, it is hoped that harvests will improve.

In her hands, Fatima Mahadi holds a big, white, slightly rustly sack. The slender 30-year-old looks over towards the small figure of her son Ahmat, who is dozing in the shade of a tree. Fatima Mahadi will use what is in her sack to make sure that he and his six brothers and sisters have enough to eat for the next few months. ‘I’ve been given seeds for honeydew melons, watermelons, peppers and sorrel,’ she says, adding almost a little embarrassed: ‘I wouldn’t have had the money to buy it myself.’

Fatima Mahadi and her son Ahmat

The Mahadi family comes from Karal, a village to the south of Lake Chad. Three hectares are all that the nine members of the family have to sustain themselves, supplemented with a little money that Fatima Mahadi’s husband earns as a tailor in the capital N’Djamena. However, this income stream cannot be taken for granted as the country is gripped by a major economic crisis. Chad is third from bottom in the UNDP Human Development Index, and annual per capita income is EUR 776. People have little access to electricity or drinking water outside the capital city, and even wells can sometimes be hard to come by in rural areas.

‘Life here isn’t easy,’ Fatima Mahadi says. She signs to confirm that she has received the seeds from the Deutsche Gesellschaft für Internationale Zusammenarbeit (GIZ) GmbH. The project, which is being run on behalf of the German Federal Ministry for Economic Cooperation and Development, is geared towards improving food supply in six of the country’s regions. It is aimed both at locals and at returnees and refugees in a bid to prevent tensions. Chad is surrounded by crisis states – Sudan, the Central African Republic, Libya and Nigeria. Since the violent Darfur conflict erupted in neighbouring Sudan in 2003, Chad has taken in some 400,000 refugees on top of its population of 14 million. A situation like this can quickly lead to disputes over resources that are already far too scarce. This is why the GIZ initiative is also hoping to foster a peaceful approach to dealing with conflict. 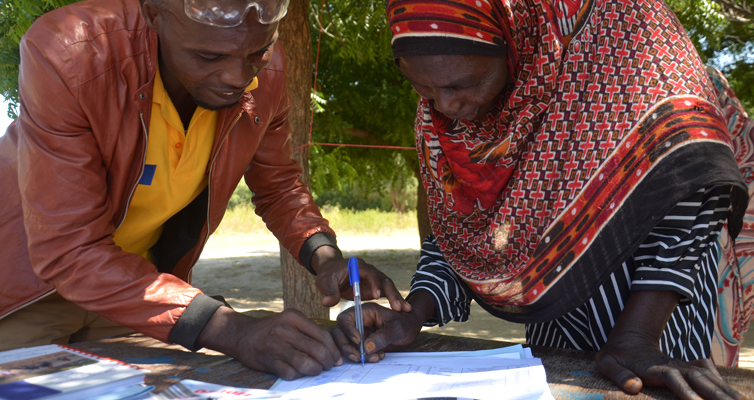 With their signature the women confirm having received the seeds.

More than 70 families in Fatima Mahadi’s village of Karal received seeds for the growing season in late 2017. They were among more than 2,500 households nationwide. All in all, 20,300 people are benefiting from the distribution of seeds alone. ‘With a bit of luck,’ Fatima Mahadi says, smiling tentatively, ‘we’ll even have enough for next year, meaning enough for a second harvest.’ This would allow the young mother to achieve another goal: ‘I want to work as a trader. I could sell anything I produce that I don’t need.’

Seeds and know-how for farmers

Zara Mahamat has already experienced what the first harvest of your very own feels like. She lives in a small village a few kilometres from Karal and received her seeds several months ago. In her loam house, she is stripping the kernels from ears of corn. ‘I’m very happy with how the harvest has gone,’ says the 48-year-old mother of six. As well as corn, she has also grown okra and sorghum. 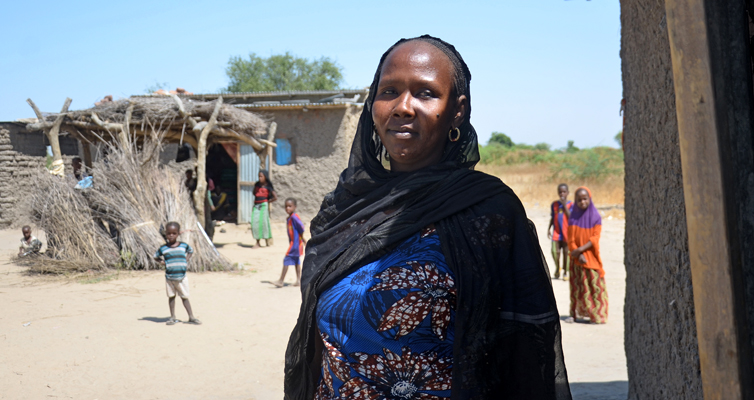 Zara Mahamat is happy about her first successful harvest

Zara Mahamat has already experienced what the first harvest of your very own feels like. She lives in a small village a few kilometres from Karal and received her seeds several months ago. In her loam house, she is stripping the kernels from ears of corn. ‘I’m very happy with how the harvest has gone,’ says the 48-year-old mother of six. As well as corn, she has also grown okra and sorghum.

Receiving training for the first time in her life

But Zara Mahamat has more than just grain and vegetables to be pleased about: ‘For the first time in my life, I got some sort of training.’ Although it only lasted three days, it taught her how to use garlic and peppers to combat harmful insects and showed her how compost is made. She wants this to form the basis for building up her own business. Up until now, the single mother has mainly worked for other farmers and been paid by the day, denying her and her children any real security. Armed with her seeds and her know-how, Zara Mahamat hopes that she will no longer be growing grain and vegetables just to feed her family: if the harvest goes well, she will even be able to sell some of it in future and thus lay the foundations for a small business of her own.