Things are changing in Bangladesh’s textile industry. Factories producing textiles for the Lidl supermarket group are changing the way they use chemicals. Employees, the environment and companies are all benefiting. We visit a pilot project.

Mohiyan Bepari’s most important piece of equipment is a monster. It’s as big as a bus, snorts, splutters and spews out gushes of hot steam when opened. Bepari, 23, operates a dyeing machine. His job is to feed lengths of cloth into the machine. He also has to fill it with dye and check the levels regularly. It’s hard work: temperatures in the factory rise to above 30 degrees, and the smell of chemicals lingers in the air. ‘Some of us used to get rashes on our hands,’ says Bepari, ‘but that doesn’t happen anymore.’ The chemicals he and his colleagues work with have been improved, and the workforce has been trained in handling them – everyone now wears gloves at all times.

For Mohiyan Bepari and his 400 or so colleagues, their place of work has become significantly cleaner and safer over recent months. His employer, Mother Color near Dhaka, is one of 40 textile companies in Bangladesh participating in PURE, an environmental and resource efficiency project. The Deutsche Gesellschaft für Internationale Zusammenarbeit (GIZ) GmbH is working on behalf of Lidl to train its suppliers. The aim is for companies to learn to handle chemicals safely and responsibly, use energy more efficiently, and improve their wastewater treatment. This protects the environment and, above all, creates better working conditions for the employees.

The German retail chain has announced it will work only with suppliers who have been awarded special certification under the international OEKO-TEX® system. In addition to environmental sustainability and reduction of energy use, socially acceptable working conditions are a criterion for this certification. Impressive results can already be seen in the participating factories, which employ over 148,000 women and men in all.

The PURE initiative is of particular significance in Bangladesh: the Rana Plaza disaster exposed the country’s entire textile industry to blanket mistrust. When the factory building collapsed in April 2013, more than 1,100 people were killed and over 2,400 injured. Much of the criticism of the industry’s working conditions is justified. However, the textile sector is crucial to Bangladesh’s economic development: the country is in the bottom third of the UN’s Human Development Index, ranking 136th out of 189 countries. About 18.5 per cent of the population – some 30 million people – live below the extreme poverty threshold of USD 1.90 a day. According to the International Labour Organization, Bangladesh’s textile industry employs over four million people, 80 per cent of them women.

Bepari’s boss, the dye-works manager Shahidul Islam, takes us on a tour to demonstrate how Bangladesh can produce textiles sustainably. He has attended a number of PURE workshops and proudly shows off the changes in the factory. Virtually every 10 metres, he stops to point out another improvement. The gas pipes are now much better insulated, for example. That cuts costs – and brings down the temperature in the factory. It also helps to prevent injuries. ‘The pipes used to be so hot, you couldn’t touch them. That’s no longer a problem,’ he says, placing his hand on the pipe covering to prove his point. There have also been a lot of changes in the chemical store. A large ventilator has been fitted to the external wall, which acts as an air exchanger and prevents flammable gases building up. And every drum of chemicals now sits inside a large container, so that any spills are contained. All the containers are properly labelled and carry warning symbols.

‘We work quite differently now,’ says stores worker Mohamed Litu, 39. He should know: he has been with Mother Color for almost 10 years. ‘The ventilator cools the factory, and the air is better,’ notes Litu. And he now understands more about the chemicals he is handling: ‘I didn’t know how dangerous many of the chemicals were,’ he says. Litu has also been equipped with a new face mask: instead of a simple dust mask, he now wears protective respiratory equipment that prevents him breathing in toxic fumes. 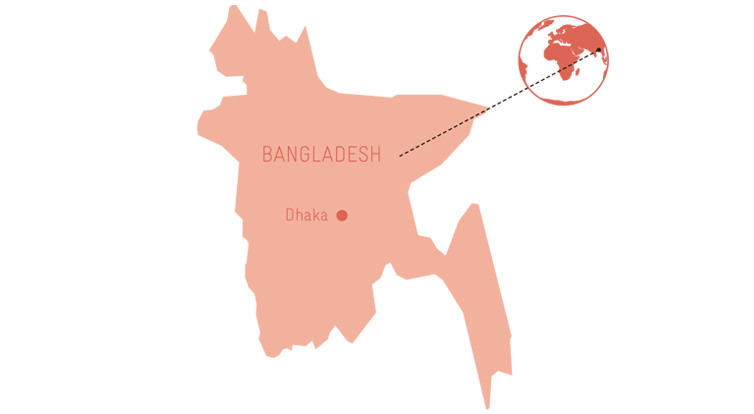 Bangladesh’s textile industry has been in the spotlight since the Rana Plaza factory disaster. In a pilot project, GIZ is working on behalf of Lidl with 80 suppliers in Bangladesh and China to train workers to handle chemicals safely and responsibly. The initiative serves to protect the environment and improve employees’ working conditions.

Mother Color is just one example of the changes that can be made to environmental and working conditions in the textile industry. A total of 80 companies in Bangladesh and China are taking part in the flagship project. Old photos show how some factories used to look, with water treatment tanks that overflowed when it rained, open drums of toxic chemicals, and employees mixing critical chemicals without gloves – as if they were beating an egg – because they didn’t know any better.

However, much remains to be done: GIZ advisor Yousuf Khan says, ‘Both workers and managers in Bangladesh are still insufficiently aware of many problems.’ As a result, accidents are still happening, he adds. He knows of an incident where a worker suffered severe burns when he tripped while carrying a chemical drum on his head. In many cases the advisors still have to gain buy-in from employers, especially because changes require investment. That’s why managers from factories that have already successfully implemented the changes come to the workshops as well: it carries more weight when they report on their own positive experiences.

Safety is now a management issue

The managers at Mother Color need no further persuading. One reason is that in the medium term the company will be saving money as a result of the changes, which initially cost the equivalent of EUR 80,000 in total. This included the purchase of an economiser, a device that recycles waste heat from the boiler. Owner Mansoor Ahmed expects the investment to pay for itself in just a few years. He has made safety a management issue: he starts work every day with a one-hour tour of the factory floor and repeats the exercise each eve­ning. One of the things he checks is whether the workers are all wearing their protective clothing and whether materials are being stored properly.

Yet Mother Color had reservations at first. ‘A lot of my managers asked why we should participate in the programme when the factory was running smoothly,’ says Ahmed. Now, though, he sees it as a response to how the industry is changing. ‘Western buyers are insisting more and more on sustainability,’ he says, ‘and we have to adapt if we don’t want to lose customers.’ He argues, though, that it’s not just about orders; it’s also about improving the quality of life in Bangladesh. ‘What we are doing is good for our workers, for society, and for the whole country.’