The right to freedom

Paralegals support citizens who have been imprisoned without charge or trial in Bangladesh. The project is part of the justice and prison reform.

Abul* spent 12 years in prison. 12 years without charge. When the police came to arrest him in January 2001 he was in his mid-20s. He was accused of having broken the country’s law on public security. ‘I don’t know what I was supposed to have done, no one ever told me,’ Abul says. He lives in Dhaka, the capital of Bangladesh. He was arrested at the same time as several other men. They were released after two years, because unlike him they could afford a lawyer.

Compared with Abul, Karimon* was almost fortunate. The 45-year-old spent ‘just’ two-and-a-half years behind bars. Without charge. ‘A neighbour reported me for alleged possession of drugs,’ she explains. The police arrested her, a judge sentenced her to prison. Her two sons, aged four and 13, were sent to their grandmother, she took her three-year-old daughter with her to prison. In Bangladesh, prison means a room measuring 100 square metres designed to accommodate 40 people, but with 200 prisoners cramped together. Each detainee is given two blankets, a plate, a glass, a bowl. Bread in the morning, rice for lunch and dinner. Occasionally fish. 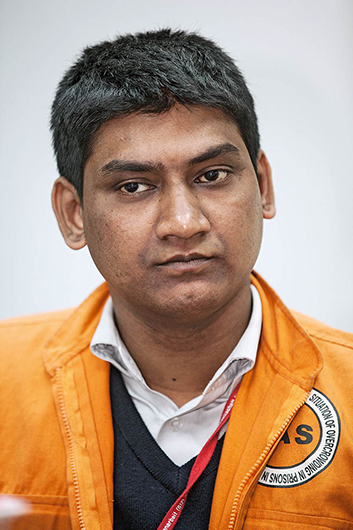 Many prisoners in Bangladesh were only released thanks to support from paralegals like Nahidur Rahman.

Promita Sengupta from GIZ is aware of even more dramatic cases. She shows a photograph of a man with snowy white hair and a bushy beard. He spent 21 years in jail. Without charge, without trial. His 14-year-old daughter accompanied him to the prison gates. 21 years later, a 14-year-old girl came to meet him – his granddaughter.

Karimon and Abul sit in the GIZ office in Dhaka. The two former prisoners are free at last and can now lead relatively normal lives. ‘These are just three examples out of tens of thousands,’ says Sengupta. The problem is colossal: there are currently over 77,000 people in the country’s detention facilities. But there is really only room for half that number. The central prison in Dhaka, for example, was designed to accommodate 2,700 detainees, yet in late 2014 it held over 7,000 men. ‘If someone gets up to go to the toilet in the middle of the night,’ Sengupta says, ‘his place is taken by the time he gets back.’

Four out of five inmates are being held in custody, often kept there for years on the grounds of an allegation or petty theft. And most do not have the money to pay a lawyer. ‘There are not enough police, not enough judges,’ says Sengupta. ‘The backlog of cases has now risen to three million.’

Long since given up hope

So what is the solution? Recruit more police, appoint more judges? Bangladesh already faces a shortage of funding and qualified staff. On behalf of the German Federal Ministry for Economic Cooperation and Development, GIZ has adopted a different approach in collaboration with the Ministry of Home Affairs in Dhaka: together they are training paralegals. The course lasts 29 days. Once qualified, the mostly young men and women are assigned to individual prisoners, in many cases soon after their arrest. They make the individuals aware of their rights and urge the courts to deal with cases more rapidly. There are currently around 130 paralegals; by 2017, it is hoped there will be 220 of them across 40 of Bangladesh’s 64 districts.

Paralegals finally brought Abul’s case to court. ‘I had given up hope,’ says the 40-year-old, remembering the period before his hearing. The law he was alleged to have broken and for which he had been arrested was no longer even in force. Even then, he should have served at most a three-year sentence.

Since the project was launched in late 2012, the paralegals have achieved extremely positive results: in around 15,000 cases they have provided legal advice to prisoners, and have supported a further 45,000 at trial. In total, they have helped secure the release of 5,100 men and women.

Training for paralegals is part of the Justice and Prison Reform project commissioned by the German Federal Ministry for Economic Cooperation and Development. The project is co-financed by the United Kingdom’s Department for International Development (DFID) and the Spanish Agency for International Development Cooperation (AECID). GIZ has been coordinating the project since its launch in late 2012. The paralegals are employed by non-governmental organisations operating in the field of legal aid.

Nahidur Rahman was one of the first to undergo paralegal training. The 30-year-old sociologist is assigned to the central prison in Dhaka and three detention facilities in the northwest of the city. ‘Every morning, three or four of us go to one of the prisons and talk to the new prisoners on remand. We explain our work and tell them how we can help.’ Often the circumstances are muddled, the legal cases are poorly documented. ‘The paralegals are sometimes the only people who can clarify the circumstances,’ says Rahman with conviction. ‘We communicate with the police, the prisons and the courts.’ The paralegals are given legal support from lawyers – one for every 20 paralegals.

The paralegals also prepare prisoners for their release from detention, for example by providing vocational training while they are in prison. A public campaign has recently been launched with the slogan: ‘We have not forgotten you.’ This campaign uses posters and TV advertisements to highlight the injustices suffered by many men and women in Bangladesh. And the suffering continues.

*Name changed by the editorial team