A paradise for renewables

Chile is powering ahead with transforming its energy system. The country has become a model for its neighbours.

Mauricio Auretx nimbly scales a narrow metal ­ladder and eases himself onto the roof of the ­Teletón Foundation building in the Chilean capital Santiago. ‘Isn’t this magnificent?’ he asks – and answers his own question. ‘Up here is where we produce the power we need to provide therapy in the building below.’

While the solar panels generate electricity on the roof, hundreds of children and teenagers with disabilities are receiving care and support, including physio and hydrotherapy, down at ground level. In the hallway leading to art and dance therapy, songs by Lady Gaga and Shakira are clearly audible. Today’s challenge is all about mimicry: the group leader selects one person who gets to dance for the group and the others have to copy them. A seven-year-old throws himself into a hip hop routine. A girl, slightly older, can hardly dance for laughing, so the others imitate her. Having fun is part of the treatment.

The Teletón Foundation is the largest organisation of its kind in Chile and is funded entirely from donations. Some of the children receiving treatment have a physical disability; others are here for rehabilitation after an accident. An array of high-tech equipment is in use, including a robotic device which helps patients to practise walking by easing the strain on their muscles. Straps are used to hold the patient in position on a treadmill. The exercise helps to embed the movements in their muscle memory.

'Every cent we save goes into therapy'

The walking therapy is an important part of the rehabilitation process, but the machine guzzles electricity. That’s one of the reasons why Mauricio Auretx, Teletón’s Head of Infrastructure, is delighted by the cost savings being achieved – up to EUR 7,000 a year – through the use of solar power. ‘Every cent we save on electricity goes straight back into therapy. And best of all, when we are closed at the weekend, we feed power into the grid, so we’re generating cash as well!’

Teletón’s solar energy system is one of more than a hundred installed in Chile as part of a government initiative. GIZ is supporting the scheme on behalf of the German Federal Ministry for the Environment, Nature ­Conservation, Building and Nuclear Safety (BMUB). ‘We want to lead by example and produce solar power on public build­ings,’ ­explains Chile’s Energy Minister Andrés ­Rebolledo, pointing upwards: solar panels have already been installed on his ­ministry’s roof.

'This is just the beginning'

Chile’s energy roadmap, unveiled by the government in 2015, is already outdated as a result of the positive progress being achieved: according to the strategy, 60 per cent of ­national electricity generation will come from renewable sources by 2035, rising to 70 per cent by 2050. ‘We’ll certainly exceed that,’ says the Minister with satisfaction. ‘We have already reached more than 40 per cent, and what we are seeing at present is just the beginning.’

Chile has made giant strides in generating power from photovoltaics, increasing its output from 4 megawatts to an impressive 1,400 megawatts in just three years. Wind farms, too, are now producing three times more power than in 2014. This new direction in Chilean energy policy is supported by GIZ through research which has shown, for example, that many government-owned sites in the north of the country offer great potential for power generation from renewable energy sources (RES). GIZ has also encouraged ­intensive cooperation between the two ­Chilean ministries responsible for the energy and national property portfolios.

Towards a greener mobility future

As a result, sites suitable for wind farms have been reserved and more than 200 megawatts of wind energy generation capacity ­installed, with an additional 300 megawatts under construction. Chile’s Energy Ministry is hoping for further growth in the renewables sector, for example in the mining industry. ‘If we can integrate renewable ­energy into the extraction of copper and lithium, both of which are needed to build electric ­vehicles, this will help move us towards a greener mobility future.’

Chile is a paradise for renewable energy producers: its northern regions offer some of the world’s best natural conditions for ­solar power. It has ideal conditions for wind energy generation, and there are plentiful water ­resources across the country, as well as ­geothermal ­energy in volcanic areas. ‘Chile has the potential to meet its electricity ­demand from ­renewables 100 times over,’ says Rainer Schröer, an engineer working for GIZ in Chile. ‘At present, only a fraction of this ­potential is being utilised – around 0.5 per cent.’

A model for other countries in the region

Despite the ideal conditions, Chile was slow off the mark in harnessing its renewable energy sources, partly due to opposition from the traditionally conservative mining industry. One of the country’s main economic ­sectors, it regarded renewables as unreliable and preferred to rely on fossil fuels. Renewables are still in direct competition with ­conventional energies: ‘There are no subsidies for renewables – not even tax breaks,’ Rainer Schröer explains.

So he’s delighted by the latest figures: the price of solar-generated power has now dropped below three US cents per kilowatt hour – a global record low. In Germany, the price of producing a kilowatt hour of solar electricity was around 9-10 cents in 2016. Over the past three years, Chile has made such remarkable progress that it now has the potential to be a model for other countries in the region, says Schröer: ‘If Chile can feed a substantial amount of RES electricity into the grid and show that this is commercially ­viable, why wouldn’t it work in Argentina or Peru as well?’

Keeping faith with the Paris Agreement

Chile’s energy industry – which still relies heavily on coal and gas to fire its power plants – accounts for around 40 per cent of its CO2 emissions, but the country is keeping faith with the Paris Agreement, aiming to cut its CO2 emissions by 30 per cent by 2030. ­Energy Minister Rebolledo is reassuring: ‘That’s an unshakeable goal. And alternative energies will help us achieve it.’ 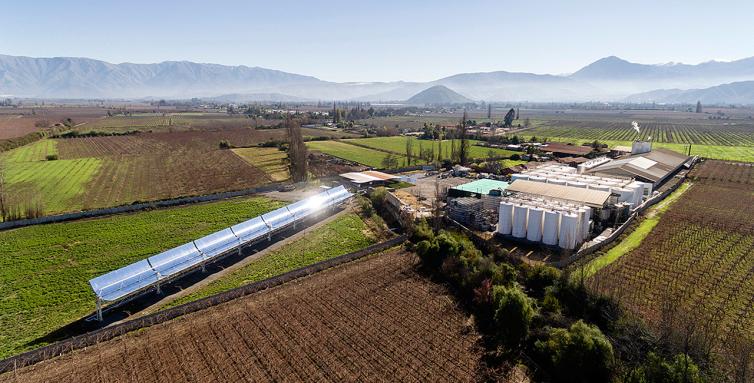 Chile does not yet have an energy efficiency law on its statute books. ‘That’s one of the challenges which still need to be addressed,’ the Minister concedes. His department is keen to continue working with GIZ in future. ­‘Germany has a wealth of experience with renewable energy, and that’s of great interest to us.’

But it is the national energy system coordinator – Coordinador Eléctrico Nacional – which holds the reins, and nothing can happen without its say-so. And until a few years ago, the organisation had major doubts about the prospects for renewables, as Executive Director Daniel Salazar explains: ‘Feeding more than a 5-per-cent share of RES electricity into the national grid seemed an impossible task.’ His team’s main worry was that renewables such as wind and solar power were simply too unreliable. ‘There were so many misconceptions,’ Salazar recalls. ‘But now everyone is convinced that it can work.’

Without overloading the grid or causing outages

The chief custodian of the national grid, Salazar stands in front of a thick glass screen which shields the beating heart of the Chilean power supply system; an electronic control panel showing all the major power transmission lines covers the entire wall. This is where voltage fluctuations in the grid are balanced out. ‘Many of our staff have taken part in international exchange programmes, some of them with Germany,’ says Daniel Salazar. ‘From our perspective, that was very helpful.’

„By cutting ­emissions here, we’ll be helping to protect the global climate.“

It took just three years to more than triple the feed-in of wind and solar power from five to 17 per cent – without overloading the grid or causing outages. And there is also scope for new technologies, such as concentrated solar power (CSP), to contribute to Chile’s low-carbon energy revolution. In Chile, it is often the private sector that takes the initiative. Juice producer Jucosol is a good example: it installed the first CSP system designed in Chile. Systems like this are extremely efficient because they are angled to face the sun. ‘The solar collectors are curved and are positioned accurately to catch the rays,’ explains Juan ­Pablo González from Ecer, the company which installed the system.

Jucosol’s highly efficient parabolic trough ­solar collectors concentrate the sunlight so that temperatures up to 100 °C are reached in the tubes. The thermal energy is used to power the evaporator that produces grape juice concentrate.

With its renewables expansion, Chile is making a major contribution to climate change mitigation. On behalf of the German Federal Ministry for the Environment, Nature Conservation, Building and Nuclear Safety (BMUB), GIZ is supporting the transformation of energy systems in this Andean country, which has more than tripled its share of wind and solar power from five to 17 per cent since 2014. Know-how to support grid integration, training programmes, ideas for ­renewables use in industrial production, and research studies are all part of Germany’s successful cooperation with Chile. Progress is also being made with the installation of solar power systems on public buildings: the current tally is 100, achieved in just three years.

GIZ is keen to progress other innovative energy solutions in Chile. It is also supporting training and professional development for technicians and, above all, the use of renewable energy in industrial production. Rainer Schröer is enthusiastic: ‘There are so many potential applications,’ he says. ‘Take food production – here, there’s scope for solar-powered greenhouses. Seawater desalination plants are another example. And there is ­major potential for hydrogen production, ­especially for use in the mining industry. ­Instead of running on diesel, the heavy ­machinery could be hydrogen-powered in future.’ And in time, Chile will not be the only beneficiary of the renewables expansion. ‘By cutting emissions here, we’ll be helping to protect the global climate.’