The white gold of Félane

Ice costs a fortune in Senegal. A group of women have banded together to make their own using a solar-powered system.

Ndéye Bineta Cissé gets to work at eight o’clock sharp every morning. She and her colleague start by opening all the windows and giving the two rooms of Félane’s ice factory a good sweep. Then she crouches down and wipes away a small puddle under the large freezer. Having inspected the eight big, black batteries, the 28-year-old gives a satisfied nod. The place is clean from top to bottom. Now the ice machine hums into life: everything is ready for the first customers.

It’s not long before someone is standing at the door with a mobile phone. The man is looking to charge his phone for the equivalent of 15 cents. The charging station is just one of the many side benefits of the small factory run by the women’s cooperative known as ‘Ndefleng’, which literally means ‘working as one’. True to the group’s name, the 127 members have already achieved a great deal.

The entire cooperative centres around this ice machine. It has been up and running in the Senegalese village, some 200 kilometres south of the capital Dakar, since 2015. Boasting 24 solar panels which generate a little over six kilowatts of electricity, the machine enables the women to produce 200 kilos of ice a day. The system also has a solar pump that pumps 13 to 14 cubic metres of water for the ice every day. Anything left over is used to water the 2,500-square-metre garden next to the building. The women have found themselves another source of income by selling tomatoes, aubergines, lettuce, peppers and okra. 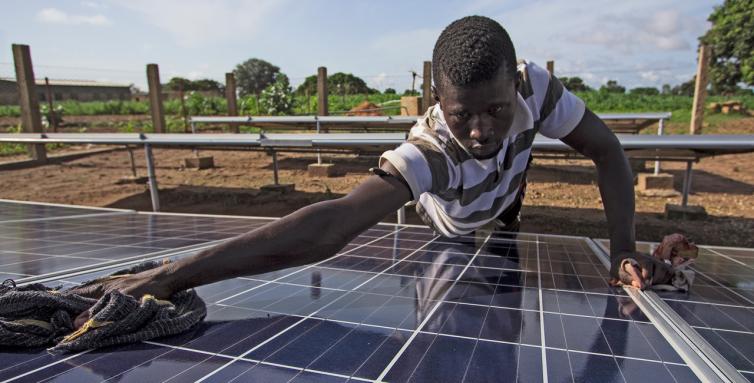 Bildergalerie: The ice machine works with solar power. Youssoufa Diouf cleans the solar panels every morning before the sun rises.

With the West African country having access to very few raw materials of its own, Senegal’s Government is backing renewable energy sources, solar power in particular. A lack of energy is one of the major obstacles to development. On behalf of the German Federal Ministry for Economic Cooperation and Development, GIZ is supporting the Senegalese Ministry of Energy in expanding its renewables sector. The partnership also aims to improve the electricity supply to rural areas.

The village has not always had electricity

Electricity has completely transformed village life. Ndéye Bineta Cissé’s daily life also looks very different now. ‘I used to do all the housework and go shopping. Now I come to the ice factory to work and earn my own money,’ says the mother of three. She had difficulty finding a job in Félane for a long while. Until recently, the village had so little to offer that many men would move to other cities and only return for Muslim festivals like Eid al-Fitr at the end of Ramadan – the month of fasting – or Eid al-Adha, the festival of sacrifice.

Until the solar-powered system was installed, the nearest electricity supply was 13 kilometres away in Djilor, which, when the heavy rains come in July and August, can only be reached by horse and cart or pirogue – a long, narrow, wooden boat. It’s an expensive, arduous and, above all, long journey to make simply to charge your mobile phone or to buy some ice.

Yet Félane could not function without ice. Its 1,000 or so inhabitants make their living from fishing. They used to buy their ice in neighbouring towns and transport it back to Félane. With the price per litre at 150 West African CFA francs (around 23 euro cents) and transport costs so high, it didn’t take long to run up a bill of several thousand CFA francs that left little hope of making a profit from the sale of their fish.

Fisherman Ousman Diouf is no stranger to these difficulties. He is standing in the garden in front of his house preparing his cart, drawn by a little grey horse. He packs two big coolboxes onto the cart to store the fish in. These preparations used to be far more complicated for the father of five. It isn’t far to the river where his pirogue is moored. With Félane situated in the middle of the Saloum Delta National Park, the journey takes less than half an hour. And, with such a wide variety of species, fishing really is worthwhile. It is just the ice that is so hard to come by. ‘Once or twice, I’ve arrived in Djilor or some other town with electricity only to discover that I’d come all that way and they’d already sold out of ice,’ he recalls, shaking his head. From time to time, he came home with a good catch and had to give away, or even throw away, some of the fish because there was nowhere to store it.

Fishermen come to the ice factory with their coolboxes

Ousman Diouf now stops his horse right outside the ice factory, a five-minute ride from his house. And it isn’t just the convenience that draws him there – it’s the price too. Here, one litre of ice costs a third of what he would pay in one of the neighbouring towns. Armed with his coolboxes, he goes to see Ndéye Bineta Cissé. She greets him and opens the ice machine, which has already produced a nice batch that morning. Diouf buys his ice by the bucket at CFA 500 a go. Once he has paid, he loads Félane’s ‘white gold’ onto his cart, urges his horse on with a click of his tongue and drives off to his pirogue.

Ndéye Bineta Cissé’s work is done and she goes home during her lunch break. From the ice factory, she can see the house where her mother-in-law and children Sidi, Fatou and Réme live. She only sees her husband twice a year – he works as a bricklayer in Dakar. She is responsible for looking after the family day to day, she explains on her short journey home. As she arrives, a pair of hens flap across the yard; washing is hanging on the line.

Solar power is creating new jobs in the village

Her salary at the ice factory depends on the monthly sales, which are divided into three parts. The first pays for the salaries of the three employees and for small repairs such as new lightbulbs or filters. The second is set aside for any new purchases that have to be made, such as when the batteries have to be replaced every four to five years. Profitability and inputs from the project beneficiaries were essential requirements right from the outset. That’s another reason why Félane was chosen. The village provided the 5,000-square-metre plot and financed and built the building itself.

The third portion is put towards the women’s cooperative fund. The group decides how to reinvest the money and is always coming up with new ideas. For example, they had a new well built to supply the village with water. Six young people also offer advice on and sell solar lamps. Since the ice factory’s system has been working without any trouble, more and more people are wanting their own solar energy at home during the evening. It would allow children to do their homework later, for example. Next on the women’s list are plans to buy their own pirogue so that they can supply other villages with ice.

More money and autonomy for women

The example of Félane is having a ripple effect within the region. Visitors like the fishmongers from neighbouring Dakhonga are very taken by the idea and are going away saying, ‘We want an ice factory too.’

People in the village are already reaping the rewards. The women in particular love the project, says Mama Diouf, president of the cooperative: ‘It’s made us stronger. We have the opportunity to earn our own money and that gives us greater economic power and autonomy. Until now it was mostly the men who had money.’ She is thinking of women like Ndéye Bineta Cissé – one of the tough, shrewd women of Félane who is taking her life in a new direction with the ice factory and its ‘white gold’.