For the residents of one village in Fiji, climate change turns their lifes upside down.

Twice a day, Kelepi Saukitoga has a visitor – the sea. When the tide comes in, it reaches his village of Narikoso and washes around his house. His neighbours – whose houses are still on dry land – joke that when the tide’s in, he can go fishing from his living room. The doorway that once opened onto the waterfront is now boarded up. ‘It’s to keep the children safe, so they don’t fall into the water,’ Kelepi Saukitoga explains. ‘They’re too young to understand the dangers. They don’t know what’s happening, or why it’s happening to us.’ 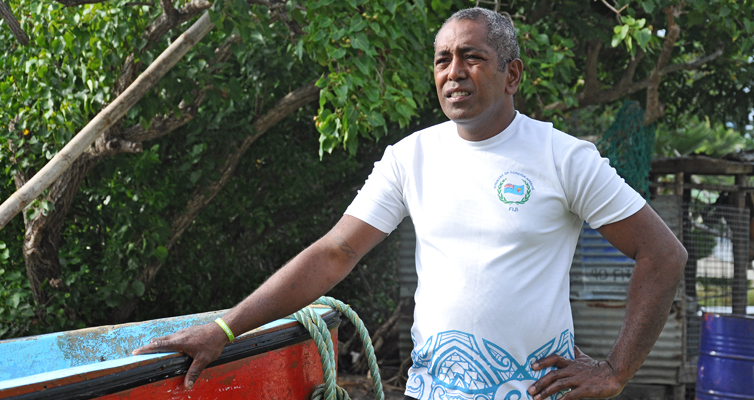 Narikoso, a village with 107 inhabitants, a few chickens, dogs and mango trees, is drowning. It might take a couple of decades, or it may not happen for 50 years, all being well – it all depends on how quickly the sea level rises. The tiny settlement is located on the island of Ono, some 90 kilometres to the south of Suva, the capital of the Republic of Fiji in the South Pacific. For years, its residents have been watching the water moving ever closer. Slow but relentless, centimetre by centimetre, the sea is steadily encroaching on the land.

Out of the red zone

Next year, 40 occupants of seven houses in Narikoso are due to be rehoused on higher ground some 150 metres from the village. They include the six members of Kelepi Saukitoga’s family. Their homes are located in the red zone, where the sea is already dangerously close, so they need to be resettled as a matter of urgency. The other 21 houses in the village will be habitable for a few years yet. The local school at Waciwaci on the island of Lakeba, with its 70 students and four teachers, will also be relocated as part of the project. 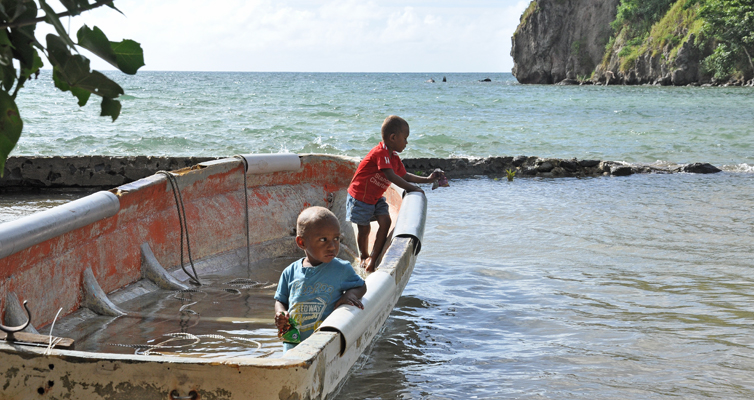 On behalf of the German Federal Ministry for Economic Cooperation and Development (BMZ), the Deutsche Gesellschaft für Internationale Zusammenarbeit (GIZ) GmbH has been assisting the Pacific island states since 2014 to cope better with the impacts of climate change. The Fiji project also helps the islanders to boost their incomes by planting gardens, learning how to make compost and grow heat-resilient fruit and vegetables, and building piggeries, henhouses and hives for honeybees. Some of the produce is sold to nearby holiday resorts, with the rest being kept for the villagers’ own consumption.

The move is being properly planned after an initial attempt in 2011 caused environmental damage in the village. The army was brought in to clear the site earmarked for the new homes, but the first spell of heavy rainfall caused a mudslide all the way down to the sea, ripping out the mangroves and conifers which protected the coastline from storms and floods. Kelepi Saukitoga, who is also the mayor of Narikoso, is delighted that a proper relocation strategy is now in place.

The new site has been surveyed by geologists and prepped for the building work. The mangroves which once grew along the coast will also be replanted to protect the families living in the 21 houses that will continue to live there for the time being. Power lines, water mains and roads are already being laid out in the new village for the other homes built here in future. The process serves as a model of best practice for other resettlement projects in the 14 Pacific island states, home to around 11 million people, where it is estimated that 100 communities will have to relocate.

A plan for the Climate Conference

The resettlement is based on a set of guidelines drawn up as part of a multi-stakeholder project for submission by Fiji at the Bonn Climate Change Conference in November 2017. Training is being provided for the relevant ministries, and local residents are fully involved in planning. Narikoso’s residents will learn how to help themselves in future – and also to ensure that the rest of the village is relocated successfully. Kelepi Saukitoga is convinced that within the next two years, the other villagers will follow him to higher ground. The issue of funding for this second phase of the project is still being resolved. 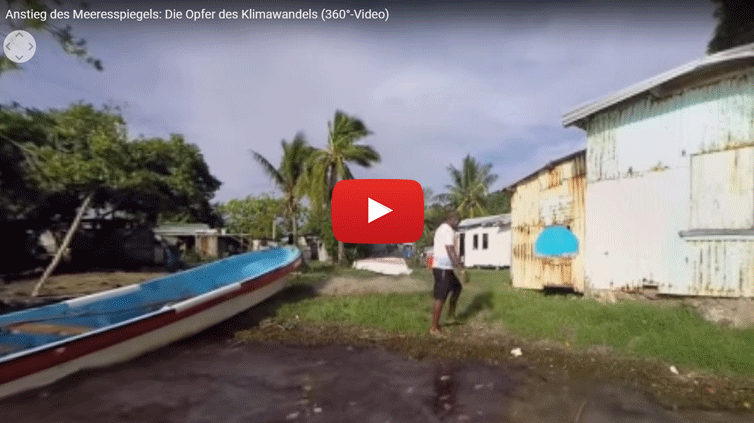 But what’s causing the constant inundation of Kelepi Saukitoga’s home? It’s a question that is preoccupying tens of thousands of scientists and policy-makers all over the world – and, of course, the coastal communities and islanders themselves, who are among the 100 million people living less than one metre above sea level.

A model for the metropolises?

Albeit reluctantly, Narikoso has become a laboratory for research on adaptation to climate change and its impacts, for the sea is not only encroaching on villages: it also poses a threat to major cities like Miami and Rio de Janeiro. But if resettling Narikoso’s residents is such a difficult task, how will it work in the metropolises? 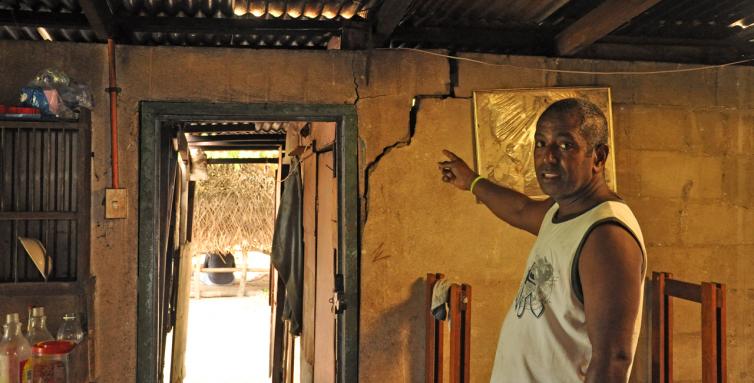 Around 50 of the world’s small island nations are already acutely at risk from rising sea levels. The Intergovernmental Panel on Climate Change (IPCC) forecasts a global sea level rise of 52-98 cm by 2100 as a consequence of global warming, and other organisations are predicting even worse. One of them is the German Federal Maritime and Hydrographic Agency (BSH), whose latest figures point to a sea level rise of up to 1.70 metres. There is a great deal of debate about climate change – but that doesn’t help Mayor Saukitoga much. All he can do is stand by and watch as the sea eats away at his land, little by little, year after year. He points to the remnants of a stone wall some 10 metres from his house. The sea has swept it away; now all that’s visible at high tide is a low parapet a few inches above the waterline. ‘When we built the wall 20 years ago, the sea was on the other side. It used to protect us.’

Mayor Saukitoga places the responsibility firmly at the developed countries’ door: ‘Because of their air pollution, the Arctic ice is melting and I’m ankle-deep in water.’ He picks up a sheet of corrugated iron left over from recent roof repairs and carries it to dry land. In his living room, he points to the cracks in the walls – there’s one over the door an inch wide. The bricks have become porous from their immersion in water, and one of the walls has already collapsed.

‘Climate change was visible in the Pacific region earlier than in Germany,’ explains Wulf Killmann, Director of GIZ’s office in Fiji’s capital Suva. GIZ has been working in the region since 1977. ‘Its impacts include more violent storms, and a water supply that is no longer safe to drink due to elevated soil salinity from rising sea levels.’ Climate change is also making rainfall patterns more irregular and driving up temperatures across land and sea. Warmer water temperatures, combined with acidification from raised carbon dioxide levels in the atmosphere, are damaging the habitats for corals and fish. ‘If the fish stocks disappear, there will be food shortages around the Pacific.’

Crops will need to adapt

Scientists are predicting a 30 per cent decline in coastal fishing by 2050, largely as a result of climate change – coinciding with a period of high population growth. GIZ is supporting the Pacific island nations with various adaptation measures that focus on fishing and agriculture in order to avert the risk of food crises.

All over the world, projects are under way to prepare communities for the challenges that lie ahead. Even our crops will need to adapt, so laboratories across Europe, the US and Asia are developing plant varieties with improved resilience to extreme weather and soil conditions. GIZ relies on a gene bank operated by the Pacific Community (SPC) in Suva when selecting crop varieties for its projects.

‘Them up there and us down here’

Mayor Saukitoga has come to terms with the prospect of the move and sees it as an opportunity. Not everything that comes in with the tide is bad, he says. That view may not be shared by all the villagers, but not everyone has to move, at least not yet.

One of the more sceptical residents is Bulou Katarina. Advanced in years, she is seated on a bench overlooking the village green, where some of the young men are training for a rugby tournament. She is busy smoothing out palm leaves between her fingers. They’ll be used for roofing or basket weaving. Her hands give no hint of her age, but her title – Bulou – shows that she is a community elder. ‘Will I live to see all of us move? Who knows?’ she says.

Although high up in the village hierarchy, she will not be one of the first to be rehoused. Even so, the prospect worries her. ‘It will be difficult, with them up there and us down here,’ she says. In the evening, the villagers convene for a meeting in Narikoso’s community centre. The items on the agenda include the timetable for the move, new motors for the boats, and livestock breeding, which is due to start in the village soon. Bulou Katarina says nothing. She is saddened by the changes, which she can do nothing to stop, especially climate change. In her eyes, Narikoso is sinking fast – no matter what fate has in store.

GIZ in the Pacific Region
More about the project