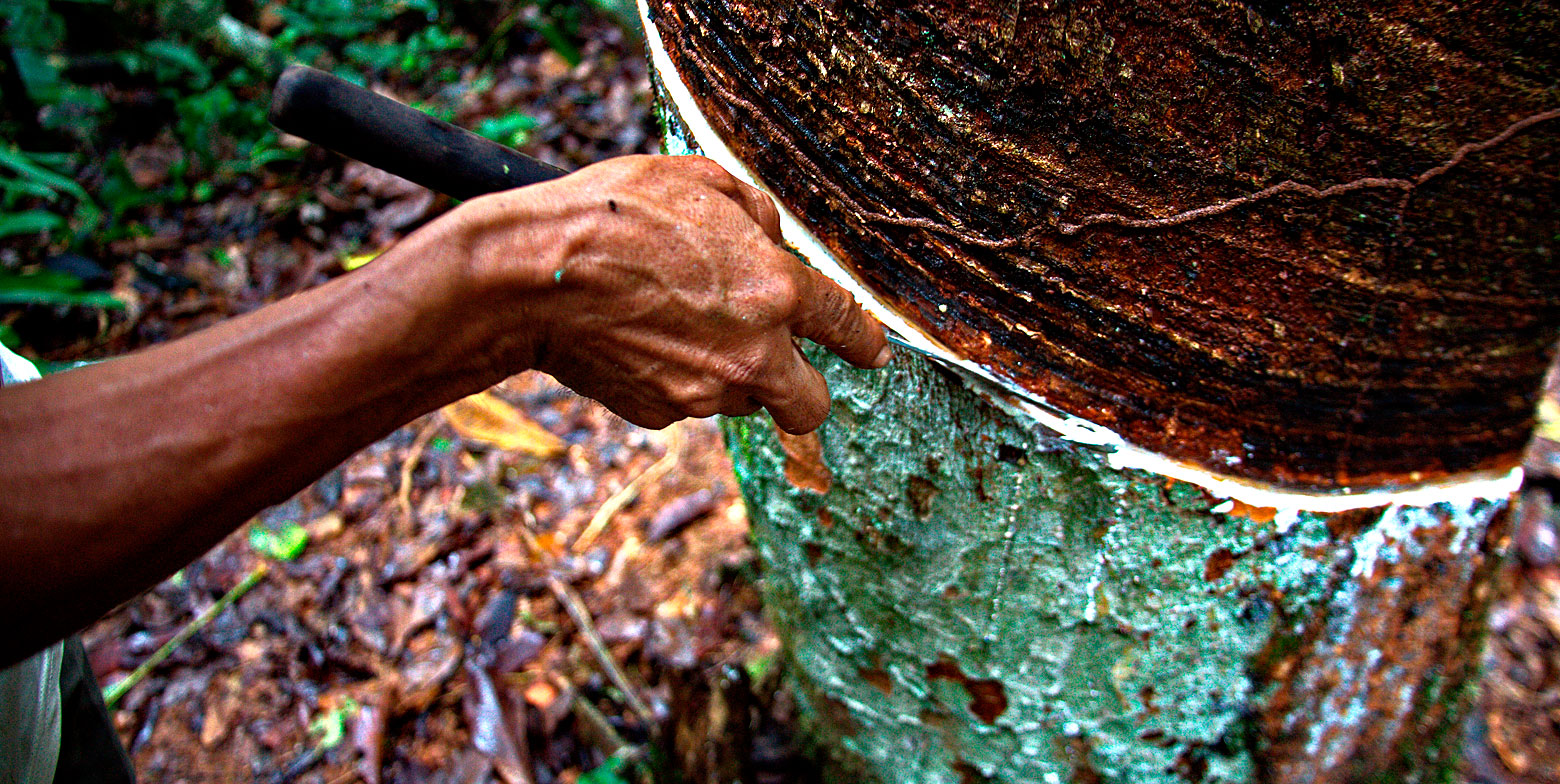 The state and local population are co-managers of a conservation area in the Peruvian Amazon.

Armando del Arca positions his knife. With a few short, sharp movements, he cuts a slit in the rubber tree’s light-grey bark. The fresh cut immediately oozes a viscous, white liquid – latex – which drips into a plastic beaker at the foot of the 30-metre tree.

Few people know the primeval forests of the El Sira mountains as well as this 85-year-old, a member of the Asháninka indigenous people. His hair is as white as snow, his tanned skin pitted and furrowed by the passage of time. This is where he grew up, the heart of Peru, where the Amazon meets the 2,400-metre foothills of the eastern Andes. El Sira is one of ten communal reserves in Peru. What is unique about these conservation areas is that they are co-managed by the nature conservation authority and the indigenous population.

The idea is simple: while local people protect the forest, the state is investing in initiatives to improve their standard of living. Del Arca is an ardent supporter of the concept. In 2001 he set up a cooperative which now brings together over 500 indigenous rubber farmers. ‘Instead of cutting down the trees, we extract their latex. That way we preserve biodiversity.’

Del Arca stows his knife in a shoulder bag and grabs his bucket. He remains very sprightly despite his advanced age. In three hours he will return to collect the beaker’s contents. He hurries off to the next tree. The faster he works, the more sap he will have collected at the end of his seven-hour shift.

Today he is joined on his rounds by Stephan Amend of GIZ. On behalf of the German Federal Ministry for the Environment, Nature Conservation, Building and Nuclear Safety, the German experts are providing the nature conservation authority and indigenous population with support in managing the El Sira reserve and four other conservation areas. Their work also includes the organisation of training courses and procurement of technical equipment such as GPS devices. The project forms part of the International Climate Initiative of the Environment Ministry.

The primeval forests of the Amazon region are the green lungs of our planet. The rest of the world benefits from the fact that Peru is conserving them, Amend explains. Every tree helps to cushion the impact of climate change by absorbing carbon dioxide. When trees are cut down, the greenhouse gas is released. Almost half of Peru’s carbon dioxide emissions are caused by deforestation.

There are 69 indigenous communities living in the immediate vicinity of the communal reserve. Like generations before them, many of their members live in timber-built stilt houses without walls. Originally constructed in this way to improve ventilation, today the houses cannot mask the poverty inside. People feed themselves from what their fields provide. In the past, most had no additional source of income – for example, to give their children an education. Now all that is changing.

Rubber – a natural resource and beacon of hope

GIZ advised village communities on developing plans for forest management and maintenance. The plans are the basis on which those living in the buffer zone around the conservation area are permitted to cultivate crops. All farming activities are monitored by state employees. This has enabled 42 indigenous communities to produce and sell products such as cocoa, the herbal remedy copaiba and the colouring agent annatto, as opposed to engaging in illegal logging. The approach has conserved over 124,000 hectares of forest which is now managed sustainably.

But rubber remains the region’s most important renewable natural resource. Twenty municipalities developed management plans that focused on the extraction of latex – or ‘tears of the tree’, as it was called by the indigenous peoples of South and Central America, who used it to make waterproof vessels and clothing.

The milky white sap only really came to the attention of the western world when the US American chemist Charles Goodyear invented a process in 1840 to turn it into elasticated rubber. Growing demand in the automobile industry triggered nothing short of a rubber boom in the Amazon basin – with disastrous consequences for the indigenous peoples, who were effectively forced into slave labour as ‘rubber tappers’. This boom ended, however, with the introduction of synthetic rubber. Nevertheless, natural rubber remains a sought-after component for many products even today – from car tyres to condoms.

It was raining a few hours ago. Del Arca runs his hand over the outer skin of the rubber tree to check it has dried out. ‘If moisture gets into the tree, it will die.’ Then he makes an incision in the bark – two millimetres deep, no more, he explains, as deeper cuts may harm the tree. Although it was once ubiquitous, many farmers have had to acquire this kind of knowledge from scratch, in many cases in training courses organised by GIZ.

Del Arca has finished his shift. Carrying a plastic bucket full of latex, he heads back to the camp run by his cooperative. From 250 rubber trees he generally extracts around eight kilograms per shift. In the dry season, his cooperative sells around three tonnes of latex per month. But although latex is in demand, it is by no means a guarantee of success. 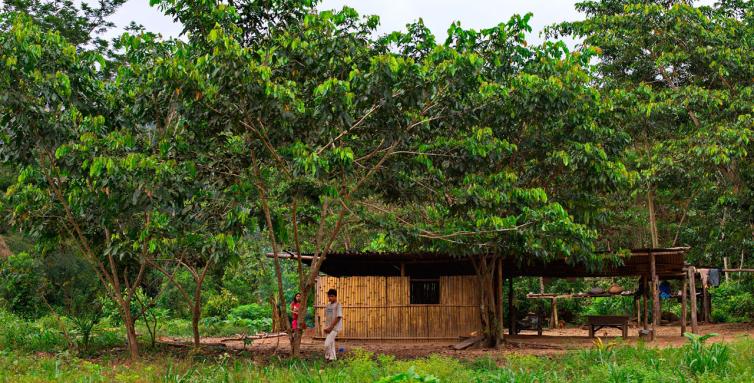 Asian nations such as Thailand and Malaysia have replaced Peru and Brazil as the main producing countries. Supply from the Far East has caused a slump in prices in recent years. The going rate paid by buyers in the capital Lima is currently 6 soles per kilogram, del Arca explains, equivalent to around EUR 1.60. He needs to earn around 900 soles per month to provide for his family – at current prices that means around 20 day shifts each month. But he is confident he can improve his situation: ‘With more latex and new products we can add value and achieve higher prices.’

Back at the cooperative’s office he demonstrates one such new product. After stretching a piece of white cotton on a large wooden frame about one metre square, he combines latex with other ingredients and begins applying the mixture to the cloth with a brush. This latest on-trend, water-repellent material is known as plant-based leather. Already boutiques around the world stock clothing made from it.

The farmers in the cooperative are now keen to conquer a slice of this market. Del Arca shows the shoes and bags they have developed. And a local beauty queen has been decked out with a crown and gown. They are currently exhibiting a range of their products at a trade fair in Lima.

Estip Basualdo is as good with figures as he is with plants. That is presumably why the stocky farmer was elected to run the cooperative. We are guests of Basualdo at the cooperative’s tree nursery. He cuts a rectangular piece of bark from a young rubber tree. He then moves to a second trunk, removes a similarly sized piece from the bark and replaces it with the first piece. A tree that is genetically identical to the first tree will now grow from this incision. Farmers refer to this traditional method of cloning as grafting.

Although smaller than Basualdo’s finger, this piece of bark is probably the most important investment in the future for the rubber farmers of El Sira. It carries the genetic data of a particularly productive and resistant tree. Members of the cooperative have so far planted 50,000 genetically identical trees – on land that had been fallow in their communities.

Thanks to these plantations, Basualdo explains, in five years they will be extracting 50 tonnes of latex per month. That would be enough to supply a small factory of their own. And to go into shoe manufacturing on a totally different scale. It may sound idealistic, perhaps. But del Arca, Basualdo and their colleagues are ambitious. ‘Peru currently has to import 99 per cent of its rubber to meet demand,’ says Basualdo. ‘In other words, there’s no shortage of demand.’

GIZ in Peru
Protection of biodiversity

Plant-based leather in fashion: interview with a future designer