At a boot camp in Berlin, German and Indian start-up entrepreneurs have the opportunity to learn both from and with each other – and to take their innovative ideas in the field of renewable energy a crucial step forward.

The marshmallows are ripe and need to be harvested now. The Playmobil farmer arrives in his Matchbox car and plucks them from the fields of yellow paper. He then transports them to the market, where lots of Monopoly money awaits him. But what to do with the marshmallow fruits he cannot sell at the market? Fortunately, there is a cold storage facility made of light blue cardboard nearby which still has spare capacity.

‘We are trying to see things from the perspective of an Indian farmer,’ says Arno Zimmermann. ‘Can he afford to spend money on a cold storage facility for his produce? If so, under what circumstances would he do that?’ Zimmermann has a keen interest in this. The 29-year-old recently founded the company Coolar with a team of engineers in Berlin. The start-up is developing an environmentally friendly refrigerator which can operate without a diesel motor, photovoltaic system or battery. The trick is that the heat of the sun is stored in water tanks and converted to cooling energy through the physical process of adsorption. The refrigerator will be used, among other things, to store vaccines in Africa. ‘We are considering whether Indian farmers could also be a market for us,’ explains Christoph Göller, who also works for Coolar.

Making the right strategic decisions at the right time is a challenge for many start-ups. That is why competent business partners are so important. In both Germany and India, there are flourishing communities of entrepreneurs in search of innovative solutions in the field of renewable energy. However, there is very little constructive contact. Moreover, in India there is little dialogue between large corporations and entrepreneurs. There are around 160 incubators and accelerators throughout the country that promote start-ups, but these are often still relatively new themselves with little in the way of contacts. As a result, Indian entrepreneurs rarely come into contact with investors and influential company representatives even within these hubs.

On behalf of the German Federal Ministry for Economic Cooperation and Development, GIZ has therefore been actively promoting closer cooperation between start-ups, incubators and companies in India since 2015. This strategic alliance is part of the develoPPP.de programme, which fosters private sector engagement for sustainable development. Its cooperation partners are Bosch Engineering and Business Solutions – an Indian subsidiary of the German technology group – and the Indian company Intellecap, which promotes social enterprises in remote regions.

The aim of the alliance is to establish a variety of networks between incubators, start-ups and large corporations by 2017. Formats such as boot camps and demo days, which bring together start-ups and companies, are currently being tested. The StartupWave platform has also been expanded and now offers opportunities for cooperation between corporations and start-ups. ‘We consider ourselves to be bridge-builders,’ says project manager Eileen Trenkmann. ‘We want to lend start-ups a helping hand at an early stage and establish ties with strong partners.’ Another project is already successfully under way: together with the social enterprise Aravind, which provides free eye examinations and operations for poor people living in rural areas of India, Bosch and GIZ have successfully introduced technical innovations in eye clinics.

In Berlin, too, the focus is on bringing together what belongs together. The participants all have one thing in common: they have been thinking about energy for many years – whether in the form of alternative sources, cooking with renewable energy or energy-efficient cooling. These are pressing issues in India, where at least one fifth of the population lives below the poverty line. Storing food is particularly problematic in rural areas. As a result, more than one quarter of agricultural produce is lost on the way to the consumer – because there is no reliable electricity supply, because of a lack of storage facilities or because the cold chain is interrupted during transportation. In addition, 85 per cent of people in rural areas still prepare their meals on wood fires. Gas stoves would be healthier and more environmentally friendly, but gas is unaffordable for millions of Indians.

Entrepreneurs meet partners who can open doors for them

Twenty-eight-year-old engineer Piyush Sohani knows that most people still use primitive cooking stoves even in villages just outside Delhi. Although small biogas systems that can be filled with organic waste by farmers are installed next to residential buildings, hardly anyone uses them. ‘The systems are outdated and unreliable,’ says Sohani. This is why he set up the company SustainEarth Energy Solutions at the University of Delhi in 2013 to produce biogas systems. The prototype is now complete and is currently being tested. 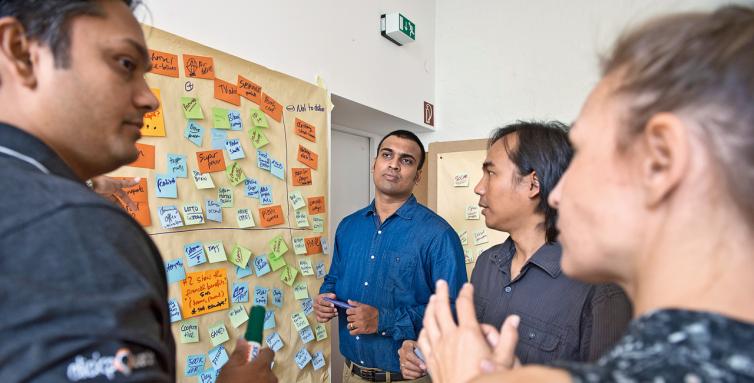 Picture gallery: Together with other entrepreneurs, seminar participants discuss how they can improve their companies.

From more than 100 applicants, a panel of judges selected 10 people to take part in the boot camp. The strong thematic focus makes it easy to find topics for conversation – even if, a little shy, the Indian and German entrepreneurs choose to sit separately on the first day. One group is dressed formally in suits and shirts, while the other is wearing the jeans and trainers typical of Berlin. However, it is not long before the ice is broken. By the third day, the atmosphere is much more relaxed during the model-building exercise. ‘It’s great that we can chat on equal terms here,’ says Arno Zimmermann from Coolar. There are plenty of connecting factors: participants from India include entrepreneurs who offer diesel-free cooling systems for lorries and software for solar installations, while German participants include companies looking to sell mini wind turbines and biogas stoves.

‘Informal exchange is particularly important,’ says Mareike Müller from the Social Impact Lab, which organised the seminar in conjunction with GIZ. The Social Impact Lab specialises in promoting social enterprises and offers mentoring programmes in several German cities. ‘The intensive workshops will give the entrepreneurs plenty of food for thought to take home with them. Plus, they are getting to know people who can open doors for them at a later stage.’

Grand finale: the pitch and the next steps

The entrepreneurs are especially keen to hear from cooperation partner Bosch. The company takes its role as a mentor seriously: Manohar Esarapu and a colleague attend ev­ery seminar, and provide detailed feedback in group discussions and on a one-to-one basis. In the case of Piyush Sohani’s biogas system, it quickly becomes clear that there are still some unresolved issues with regard to the business model. The entrepreneur has been considering a solution which would even allow farmers to earn money from the system – by selling the fertiliser that is a by-product

of gas production. The only problem is: who would collect, transport, package and sell it? Sohani has to face a number of difficult questions. Nonetheless, he is grateful: ‘I now know what I need to work on.’

Strategic partners Bosch, Intellecap and GIZ, on behalf of the German Federal Ministry for Economic Cooperation and Development, are working together to promote cooperation between large corporations, incubators and innovative start-ups. They are improving the opportunities for incubators through coopera­tion with corporations. They are also providing direct support for ambitious entrepreneurs with promising ideas through events such as the 10-day boot camp in Berlin for selected start-ups from Germany and India.

The crucial test comes on the last day in the form of the pitch, where start-ups present their ideas to investors. More than 30 people gather to hear what the entrepreneurs have to say, including representatives from the energy companies Vattenfall and RWE. The rules are strict: the entrepreneurs were able to practise their presentations the day before with a trainer from Silicon Valley. They have just five minutes to spark the interest of the audience. A stopwatch relentlessly counts down the seconds.

In the end, Coolar wins the title of best German start-up and goes home with an invitation to India. Sohani is also very pleased: ‘I’ve made a lot of progress.’ His business model has come along so far that he can sum it up in just a few words. He is now hoping to take it forward to the next stage and plans to repeat his presentation in the near future, this time in India, in front of Indian corporations and investors.