‘Suddenly, we felt we could speak freely’

It is 10 years since Tunisia’s President Ben Ali was forced out of office. The event was an important milestone in what became known as the ‘Arab Spring’. Today, many Tunisians are disillusioned, not least because of the country’s economic problems. But Amel Saidane, President of Tunisian StartUps and a member of the Board of the United Nations Economic Commission for Africa, believes that digital transformation presents opportunities.

You lived through the Arab Spring in Tunisia. What do you remember most about that time?
I associate that tumultuous period with very intense emotions. There was widespread euphoria and hope but also fear, including fear for our lives. Before then, we had always spoken very quietly whenever we discussed politics at home, because we never knew who might be listening. Then, suddenly, we felt we could finally speak freely. We all saw this as a unique opportunity to build our country – a new Tunisia – and many Tunisians returned home from abroad. That optimism carried us through the first few years.

How important were social media in this revolution?
Everyone suddenly started using social media. I still remember setting up my Facebook account in December 2010 so that I could follow what was going on and express my views. When I look back, I realise we were all rather inexperienced, but it felt really cool. We got our information from social media because everything was hushed up by the state media. People used online platforms more and more, to blog, make YouTube videos and become influencers. 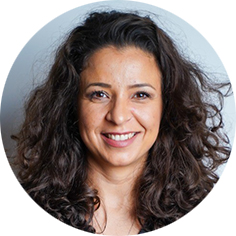 Amel Saidane (41) is President of Tunisian StartUps and a member of the Board of the United Nations Economic Commission for Africa. A qualified electrical engineer, she studied in Germany and the USA and worked in Tunisia for multinationals including Microsoft, Nokia and Siemens. In 2013, she switched her focus to start-ups. Most recently, she set up a consultancy company, Betacube, to support the process of setting up and developing new businesses.

What changes did this digital revolution bring about?
It was easy to network. Facebook became a public space, not just for news but also for creativity and art. We rediscovered ‘Tunisian’ – the dialect of Arabic spoken in Tunisia alongside the official languages of Arabic and French. Suddenly, people were blogging in Tunisian. And intense debate sprang up, including about issues that nobody had ever discussed before.

And where were these developments happening – in the capital Tunis and within a particular social group, or right across the country?
Right across the country. Around 6.4 million people – more than half the population – had access to the internet. And anyone with internet access was also on Facebook. That shows you how open Tunisians are to digitalisation. One advantage of many African countries is that it’s much easier to do certain things than in Europe. Compared with Germany, Tunisia is covered in satellite dishes, and there is internet access everywhere.

“Digitalisation means inclusion and participation for everyone.
And we need to make much better use of that.”

But is that true of all groups in the population?
Everyone is online and open to digital services. It has nothing to do with their level of education. I know a cleaner who bought a smartphone even though she cannot read or write. She is on Facebook, uses voice messaging and does all her shopping online. She manages brilliantly. Digitalisation means inclusion and participation for everyone. And we need to make much better use of that.

In 2013, you decided to stop working for Microsoft and set up your own business, focusing on the start-up scene. Why was that?
It reflected the zeitgeist, a feeling of wanting to start something new. Without the revolution, Tunisia wouldn’t really have had a start-up scene, but it created an economic space that enabled many Tunisians to develop as entrepreneurs. But many of us had very little idea of how it all worked. The World Bank confirms that Tunisian entrepreneurs spend around 35 per cent of their time on bureaucracy. And it’s difficult to find support and finance in the country. So in 2016, a group of young entrepreneurs decided to set up an association for start-ups. We campaign for the group’s interests, and we are a permanent point of contact for the Government. We helped to create new legislation on start-ups, which makes it much easier to launch a new business. The association now has 400 members who are accredited under what we call the ‘StartupAct’ and who enjoy a number of benefits. A quarter of these companies were set up by women.

“The start-up scene and digital transformation are among the very few opportunities Tunisia has to find a role in the global economy.”

What potential does digitalisation offer for Tunisia’s future development?
The start-up scene and digital transformation are among the very few opportunities Tunisia has to find a role in the global economy. Many traditional industries no longer have a future – that’s why the start-up scene is so important. But the Government lacks a vision for the future: there is a lot of debate at conferences, but nothing much happens, and there is no narrative, either. We want people’s perception of Tunisia to be not just camels and sunshine but of a people who are innovative, smart and digitally savvy.

If you think back to the sense of optimism that accompanied the Arab Spring, would you say that many of your hopes have been fulfilled, or are you disappointed?
I’m very disappointed, of course, because the start-up scene will remain a bubble unless it is more closely integrated with the rest of the economy. Unfortunately, Tunisia’s economic development is a disaster compared with the possibilities the country offers. Many of my peers have already given up hope and are wondering if they should emigrate. But Tunisians are passionate about their homeland and would stay if there were brighter prospects here. Tunisia offers a very high quality of life, and with digitalisation, it’s a good base from which to work with companies abroad. But there is plenty of scope for improvement, though that requires both political courage and skill in implementing change as well as trust in a new generation of innovators.