Solution in a nutshell

Cultivation of cashew nuts has improved lives of farmers in Ghana. For a long time their potential remained unexploited.

These trees have changed my life, they have made me a happy woman,’ says Victoria Ataa, lovingly patting the bark of the tree that provides her with shade from the midday sun. The Ghanaian farmer is seated under a cashew tree in the village of Congo. Its fruits have not only freed the 66-year-old from abject poverty, they have also made her a role model for thousands of other farmers across Africa. 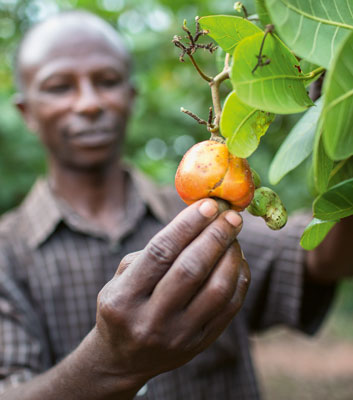 ‘Exotic fruits’: For a long time nobody in Ghana knew what to do with cashews. Now farmers have recognised the tree’s potential.

Fourteen years ago, Ataa used to sit by the roadside selling water in plastic bags. It was, the proud woman explains, an undignified job for a farmer, but her fields were just not productive enough to make a living from. As the dry periods became more ­frequent, the harvests dwindled. Only the trees with the strange, kidney-shaped kernels seemed unaffected by the drought. But in the same fields where Ataa’s grandfather had once planted yams, manioc and corn, nobody knew what to do with this peculiar, ­unfamiliar fruit. A few ‘strange Indians’ used to buy the nuts from the children at a knockdown price, Ataa recalls.

Then one day, while the farmer was wondering how she would feed her five children and send them to school, a man came over and spoke to her. ‘A woman like you should not be sitting here on the roadside. A woman like you should be growing cashew nuts,’ said the customer. He was chair of the Cashew Industry Association of Ghana. He told her that global demand for the sweet, buttery nuts was growing by around ten per cent each year, with prices rising even more quickly. Moreover, he went on, there were no signs of the trend slowing and Ghana was one of the best ­areas for growing cashews anywhere in the world.

Ataa tried to find out everything there was to know about cashew nuts in Ghana. It did not amount to much. Most farmers at the time had no idea how to increase yields from the trees, nor how to store and process the nuts. At the same time, they had little idea who might buy the nuts and at what price, so few farmers showed much interest in the kernels – even today they remain a rarely used ingredient in Ghanaian cuisine. But Ghana was not the only country making ­little use of its cashew trees. In many other African countries, the nuts were left rotting in the fields, while worldwide demand and prices continued to rise.

The African Cashew initiative (ACi) was launched in 2009 with the aim of harnessing this enormous untapped potential. On behalf of the German Federal Ministry for Economic Cooperation and Development and in cooperation with the Bill & Melinda Gates Foundation and over 30 private sector partners, GIZ implemented the programme in Benin, Burkina Faso, Côte d’Ivoire, Ghana and Mozambique.

From production to export

The African Cashew initiative, which in 2016 was awarded the DAC innovation prize of the Organisation for Economic ­Co-operation and Development (OECD), targets the entire process: from production and processing to sales and export. ‘Experts give farmers advice on how they can increase their yields – and therefore their income – through improved growing, harvesting and storage techniques,’ explains Rita Weidinger from GIZ. ‘This approach has so far benefited more than 430,000 farmers in participating countries. Many of them have been able to double their income from cashews in this way.’ 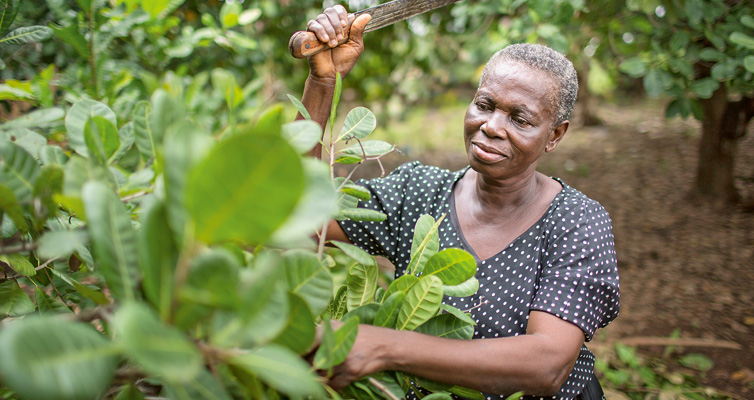 Farmer Victoria Ataa is a pioneer of cashew nut cultivation in Africa.

Victoria Ataa has taken part in several of these training courses. And the success is tangible: ‘I used to harvest five to eight sacks of cashews, this year it was 16,’ she says with pride. And not only has she more nuts, she also sells them at a higher price. ‘Before we took part in the training courses, the dealers often used to cheat us. Now we know what our nuts are worth, so we no longer allow ourselves to get ripped off,’ the widow explains with self-confidence. Today she can get the equivalent of 90 euro cents for a kilo of unshelled nuts; ten years ago it was just nine euro cents.

The money has enabled her to build a new house, buy several cows and send her eldest son to university in Accra. Having taken a degree in agriculture, he now teaches at the university of applied sciences in the capital. As often as he is able, he makes the day’s journey to visit his mother in her village. And the agricultural expert always gives her the same advice: ‘Mama, plant more cashew trees. They are the future.’ Ataa has listened to her son. She has even planted cashews on her uncle’s land. And in her fields she often receives visits from other farmers keen to learn how they too can increase their harvests. ‘I’m not afraid of competitors,’ says Ataa. ‘Demand is still greater than supply. I learned a lot from the training courses. Now I want to pass on what I know.’ 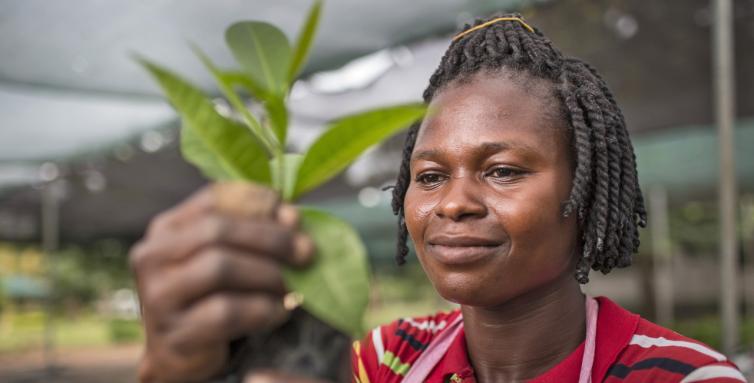 She bought the seedlings for her new field at the Cashew Research Station in nearby Wenchi. Here, Arthur Robert and his 14 co-workers conduct experiments in laboratories, a nursery and on 365 hectares of testing ground. By crossing different cashew varieties, they aim to make the trees even higher yielding and more resistant to drought and pests. Progress has been ­remarkable. Without any genetic engineering, the scientists have succeeded in ­increasing the average harvest from 4-8 kilos per tree to 20-35 kilos. Robert is convinced that the ­figures can go much higher. ‘There will probably be less rainfall in Ghana in future as a result of climate change. But for the cashew tree that is not a problem. It copes well with dry weather. So our goal in the next few years is to turn Ghana into one of the leading international producers.’

Joseph Yeung has his fingers crossed for the researcher. Born in Shanghai, the manager heads up the second-largest cashew processing facility in Ghana. At the height of the season, there are as many as 1,200 people working for the company based at Mim in western Ghana, which was advised by the African Cashew initiative. With a lot of the processes involving manual work, they free the sweet kernels from their hard shells, ­remove the thin skin from around the nuts and pack them ready for export. When Yeung took over management of the facility in 2010, his workers produced around 800 tonnes per year; today the figure is nearer 5,000 tonnes. ‘We could easily process 7,500 tonnes here, but unfortunately sometimes nuts are in short supply.’

Many of the company’s workforce are in steady employment for the first time. Around three quarters of them are women. Ernestina Adu-Gayanfuah is busy sorting cashew kernels by size, quality and colour on a brightly lit table. She will process close to a hundredweight in her eight-hour shift. ‘The pay is okay and our free lunch is very good. We also get 15 days paid holidays per year and receive our wages even when we’re sick. But I don’t want to spend my entire life here sorting nuts,’ says the young woman who spent twelve years at school. The 22-year-old has plans to become a nurse. But for the training she needs money – and the cashew factory is the best way to earn enough to pay the fees. 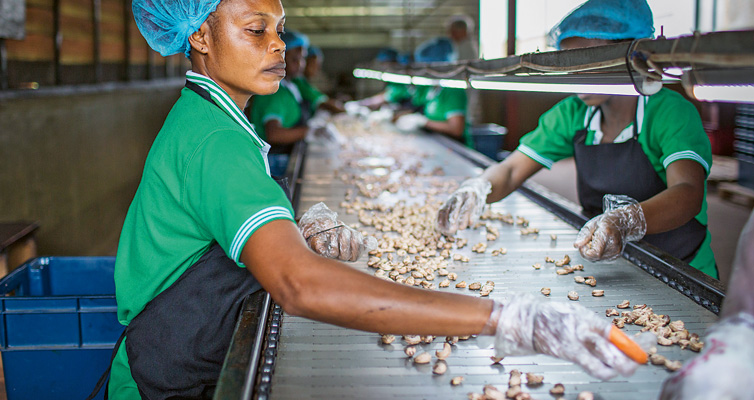 The cashew-processing ­factory in Mim employs up to 1,200 people.

Soon, perhaps, the young factory worker will be sorting nuts from Victoria Ataa’s new field. The single-minded farmer is determined to continue increasing her production. ‘In the past I never wanted my now grown-up children to become farmers. But since we started farming cashews, I’ve nothing against my grandchildren following in my footsteps.’ 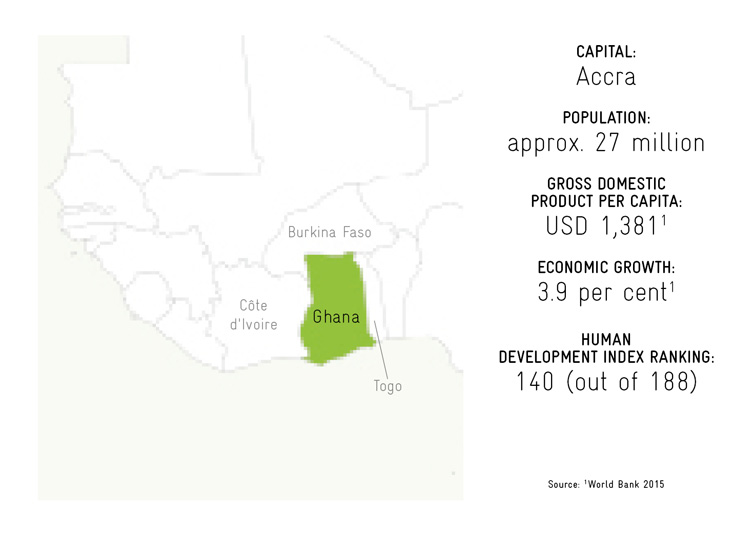 READY TO FACE THE COMPETITION

430,000 farmers in five countries have so far benefited from the African Cashew ­initiative: in Benin, Burkina Faso, Côte d’Ivoire, Ghana and Mozambique. It has ­created around 6,000 new jobs in processing, three quarters of them for women. In Ghana alone, over 60,000 farmers have taken part in training courses organised by the African Cashew initiative to improve the quality of nuts. Almost nine out of ten farmers now apply their new knowledge on a daily basis. Yields have risen from 530 kilograms per hectare in 2010 to as much as 958 kilograms in 2015. Almost 2,500 jobs were created in Ghana, the majority of them for women. The African Cashew initiative is also supported by companies such as Intersnack, Kraft Heinz, Olam and SAP. These companies bear the majority of the costs.
Mehr auf giz.de: