Brought together by a volunteer programme, financial experts from Deutsche Bank are supporting rice farmers in Thailand with specialist advice.

On a normal working day, Sven Sievers would be sitting in his office in Hamburg around this time. He would be on a conference call with colleagues or perhaps meeting representatives of his key accounts in his role as an account manager at Deutsche Bank.

Instead, he is sitting in an air-conditioned minibus driving through the province of Ubon Ratchathani in north-eastern Thailand. The view from the window in the early morning light is dominated by the dry and dusty landscape of harvested rice fields. The region, which is situated in the triangle between Thailand, Laos and Cambodia, is one of the country’s poorest. The contrast between it and Thailand’s ultramodern capital city Bangkok, with its giant shopping centres and skyscrapers, could not be greater: most people in the villages here are rice farmers who live in simple wooden huts. The majority of vehicles on the roads are mopeds or pick-up trucks.

Offering advice in a voluntary capacity on a rice initiative 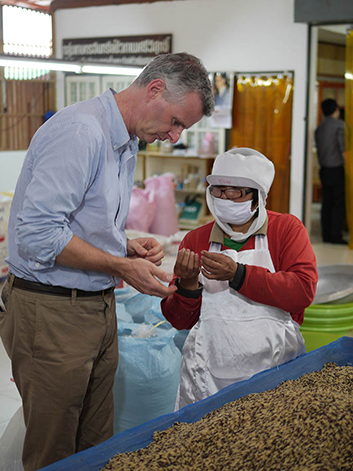 The voluntary advisor Sven Sievers gains an insight into the work of rice farmers.

Sven Sievers (55) has short, greying hair and is wearing a black jacket despite the heat. He has all the qualities of a good customer advisor: he is calm, unassuming and has an aura of expertise. He is accompanied by Karolis Verseckas, a 26-year-old analyst from Lithuania. Verseckas normally works in credit financing for the Spanish market at Deutsche Bank in London.

Sievers and Verseckas are in Thailand for four weeks to offer advice in a voluntary capacity on a supraregional rice initiative launched at the start of 2015. Here in Ubon Ratchathani, they plan to meet rice farmers and representatives of local authorities.

Part of the German Food Partnership

The supraregional rice initiative is part of the German Food Partnership, which was founded in 2012 under the auspices of the German Federal Ministry for Economic Cooperation and Development. The Partnership consists of German companies and associations wishing to combine their own interests with development objectives. Working with local actors, they are looking to create stable processes in developing countries and emerging economies, from cultivation and processing to trade and consumption. The Partnership is coordinated by GIZ.

The minibus arrives in Mueang Det and stops in front of the municipal rice centre, a state institution which offers advice and support for rice farmers, of which there are thousands throughout Thailand. Mueang Det could also be one of the centres of the supraregional rice initiative, which will offer farmers training in a number of areas in future, including irrigation methods, plant protection, bookkeeping and market theory.

Around three dozen farmers have turned up to talk to Sievers and Verseckas. The proceedings are formal, as is typical in Thailand. The farmers – mostly men in their fifties – are already sitting in four rows when the visitors arrive. Sievers, Verseckas and the GIZ employees take their seats at a long table. The group also includes representatives of the rice wholesaler Olam, a group headquartered in Singapore which could become a partner of the new initiative and buy an agreed quantity of rice from participating farmers.

Sievers stands up, takes the microphone and asks: ‘How does financing work here? Where do you get your loans? And do you usually get what you need?’ The group speaker answers Sievers’ questions on behalf of the farmers. Normally, he explains, farmers borrow money from the agricultural bank or from their cooperative bank. However, he says, the interest on these loans is quite high and the farmers often do not receive the full amount. He hopes to get better access to credit. Sievers nods.

The farmers provide further examples of the difficulties they face. For example, one farmer explains their current problems in accessing markets. He says that more rice is now being produced in the region than distributors are buying. Farmers are therefore often left with surplus produce. To make matters worse, production costs are high: because many young people are leaving the region to work in Bangkok or in other cities, he adds, farmers have to hire additional day labourers. Something has to be done to rekindle young people’s interest in agriculture, asserts one man. Another says that he hopes to lower his production costs – which are simply too high – by using machines. Sievers and Verseckas listen attentive

‘For me, the meeting showed that there are extremely dedicated people out there who are interested in improving the quality of their products,’ says Sievers after meeting the rice farmers. Sievers and Verseckas want to support the famers’ willingness to explore new avenues to improve their livelihoods by devising a financing model specifically for Thai farmers. ‘We plan to look at how much rice a farmer produces, what he gets for it, what his costs are, and what he needs to support his household,’ explains Sievers. ‘We also plan to look at the other side of the coin: the lending options available to farmers, the costs incurred by them, and whether these are appropriate.’

The business experts Karolis Verseckas (l.) and Sven Sievers are striving to develop a financing model for farmers.

Sievers and Verseckas are in Thailand as part of an international volunteer programme organised and coordinated by GIZ. German companies release their employees for one week to help charitable causes around the world. ‘This allows them to gain experience in a sector which is new to them, but still closely related to their day-to-day work,’ explains Matthias Bickel, from GIZ in Bangkok. Employees from Deutsche Bank have already travelled to Myanmar, Uganda and Uzbekistan to participate in the programme.

Sievers and Verseckas spend most of their time in Thailand working at the initiative headquarters in the Sukhumvit area of Bangkok. When they are not working out the details of the financing model for farmers, they hold background discussions with experts and representatives of authorities.

At first glance, rice cultivation in Thailand appears to be a big success story. After all, Thailand has been one of the world’s largest exporters of rice for decades. ‘But when I look at productivity, it seems that many farmers are struggling to earn a living,’ says Sievers. The initiative therefore aims to increase yields by around 20 per cent. That may be too ambitious, he adds. ‘But you have to aim high to get results.’

The International Corporate Volunteering programme offers employees of companies the opportunity to put their skills to good use for a few weeks in a developing country or emerging economy. GIZ arranges project placements which enable participants to use their expertise and contribute to solving specific local problems. It prepares them for the trip and assigns contacts to support them in the relevant country. For many companies, voluntary placements are an integral part of both their social commitment and their personnel development measures. They also provide an insight into new markets and innovations.

Sievers first heard about the volunteer programme through an email sent by his bank’s Corporate Social Responsibility department. He wasted no time in registering his interest and was invited for an initial interview soon afterwards. He has been interested in volunteer work for some time: ‘I’ve also offered to mentor younger colleagues. After all, I’ve been with the bank for 30 years.’ His department head supported his decision to take part in the volunteer programme.

Verseckas also jumped at the opportunity when he heard that the programme was looking for volunteers. ‘I’ve worked as a volunteer before and found it very rewarding,’ he explains. Because his fiancée is from Thailand, he knew the country well before taking part in the rice initiative. ‘I’ve been here a few times and am aware of the problems facing rice farmers – for example, the fact that young people no longer want to work in the rice industry.’ He was therefore delighted to be accepted into the programme. Education is key, and that is something Verseckas says has become abundantly clear for him during his time in Thailand.

"It' about business expertise"

For example, he has learned of individual farmers who have studied and incorporated their knowledge into their business. They are now in a far better financial position than most of their colleagues. ‘And that’s precisely what the farmers are telling us: show us what we can do, and we’ll do it ourselves. They’re not asking to be spoon-fed.’

With his typical reserve, Sievers describes his experience so far. ‘What we’re doing here isn’t astrophysics, it’s about business expertise. But it also gives me the opportunity to broaden my horizons. And to learn and see things which I can incorporate and use elsewhere in future.’ He admits that Thailand has been a steep learning curve for him. This is the first time he has worked in the field of agricultural produce. And in a city like Bangkok: ‘I always thought that Hamburg was a big city, but since being in Bangkok, I’ve realised that I actually come from a small village.’