Vocational training in the Palestinian Territories

On the West Bank, where jobs are scarce, vocational schools are helping young adults to find success on the labour market.

Wafa Mohammed Ziada is from the village of Bilîn, a few kilometres west of Ramallah. 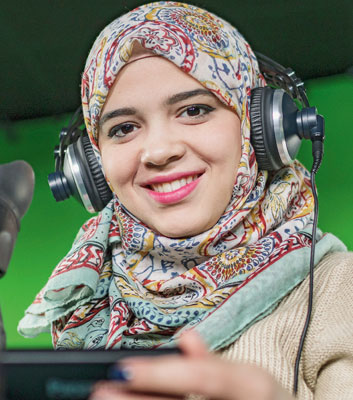 In her element: Wafa Mohammed Ziada is already a professional behind the video camera – and she clearly enjoys her work.

Today she is returning to her vocational school as a visitor. Her face radiates satisfaction, as well as hint of shyness. She is given a warm welcome by her teachers at the Palestine Technical College for Girls in Ramallah. Wafa is now a young entrepreneur. When she was at the college, she started up in business as a self-employed wedding photographer and videographer. She is 22 years old, married and has a daughter. She graduated in summer 2016. For her teachers, Wafa’s success is confirmation that their approach is working: she is fully booked for every weekend of the wedding and engagement season, which runs from March to the start of Ramadan.

Bring training into line with needs of market

She set up her photographic studio in a shop next door to her husband’s hairdressing salon. The married couple’s two businesses complement each other well, and they are able to feed their young family without relying on parental help. That is not always the case here on the West Bank: according to the Palestinian Central Bureau of Statistics, the unemployment rate among young adults is around 40 per cent.

As almost everywhere, universities in the Palestinian territories attract hordes of young people – but the lack of large companies in the region means that jobs for graduates are few and far between. On the other hand, there is great demand for builders, joiners, painters and decorators, car mechanics and plumbers. This is the starting point for GIZ’s work. On behalf of the German Federal Ministry for Economic Cooperation and Development (BMZ), GIZ helps schools, the Ministry of Labour, the Ministry of Education and Higher Education, and the chambers of crafts and trades to bring technical and vocational education and training (TVET) more into line with the needs of the market. The schools achieve particularly good results when they equip young people with the skills they need to set up their own businesses. The European Union also provides financial support to the programme with the objective of broadening its impact. Of the 6,500 young adults taking part in the programme, it is anticipated that half will have found a job in their chosen trade within six months of completing their vocational training; around 500 are expected to start up a business of their own. 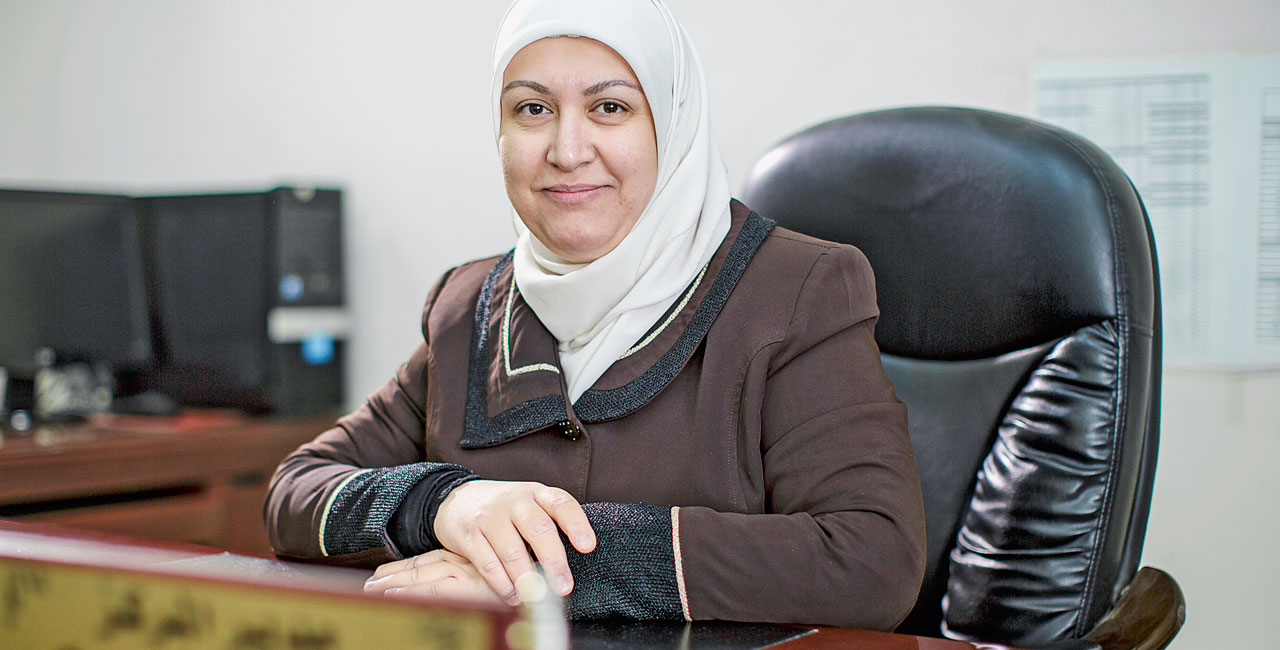 Strict selection criteria: Sandos Abubaker is head of a vocational school in Jenin. ‘We only take the best,’ she says.

It is even harder for young women to find employment than it is for young men. Founded in 1952, the Technical College for Girls in Ramallah offers courses in subjects such as accountancy, technical drawing, architecture, needlework and fashion design. Few typically ‘male’ professions are available to women in Palestinian society. Soon, however, the vocational school in Jenin in the northern West Bank will introduce a painting and decorating course for girls – a minor revolution in itself. But it is based on a promising concept: according to the traditional moral code, tradesmen are only allowed to enter a family’s private rooms in the presence of the male of the house. Female painters and decorators, on the other hand, can work even when only the women and children are at home – a potential gap in the market for these young women.

Wafa has exploited a similar opening. Palestinian weddings are major festivals that can last for up to three days. Often they involve several hundred invited guests, sometimes the entire village, and a huge extended family. Men and women generally celebrate in separate rooms. In such cases, the male guests – including the photographer – are prohibited from entering the room for women. And that is where Wafa’s success story begins: her wedding videos, which are at least two hours long, are also able to document the event as experienced by the bride and female guests. These videos carry enormous value for the families. Since many of them spend a great deal of money on the wedding, it is important that the festivities are recorded in all their splendour and from all perspectives. 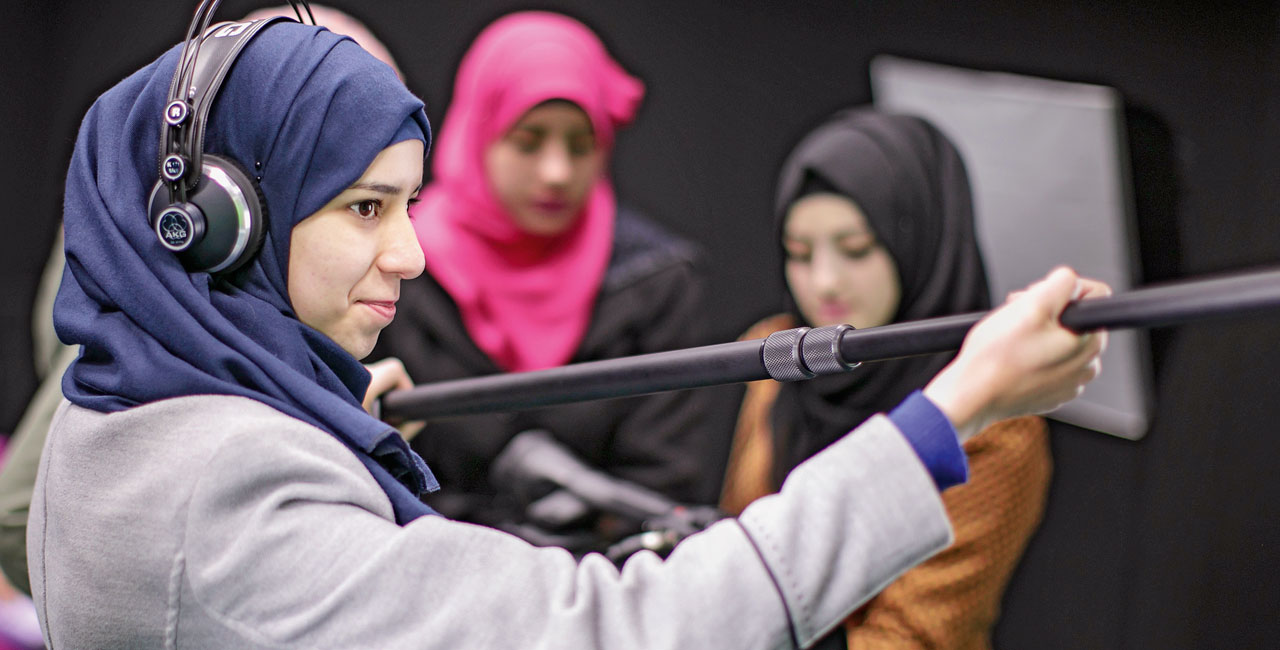 A good environment for learning new skills: the film studio in the ‘competence centre’ at the Palestine Technical College for Girls in Ramallah.

In 2014, GIZ set up a state-of-the-art film and sound studio at the Palestine Technical College for Girls. It was commissioned by BMZ in partnership with the Swiss Agency for Development and Cooperation. An annual intake of up to 24 young women receives training here over a period of two years. Today a group of students are standing beside four cameras in a darkened room, with giant spotlights hanging from the ceiling. They are debating who should read the voice-over text, who should stand where, what camera angles they require. This is the studio in which Wafa learned her craft. Naturally, the college’s management team hopes that its graduates will one day become famous TV journalists – perhaps working as reporters for the Al Jazeera network to draw attention to the situation of the Palestinian people.

But for now, it is success enough that the entire first class – which included Wafa – has already found work, either with television production companies or as wedding video­graphers. No one was quicker off the mark than Wafa. She began setting up her own business before she had even finished the course. As a high school leaver she had already decided that she had no intention of spending years at university without the prospect of a job upon graduation. Instead, she preferred the idea of starting work as soon as possible in order to gain financial independence and support her family. Now she has achieved her dream.

Forging links with companies while still at school

For the young men at the vocational school in Jenin in the northern West Bank, that dream is still some way off. Fifteen of them are hard at work in the joinery workshop, sanding down wooden window frames by hand.

Ameer Abu-Wafa, aged 18, hopes to set himself up as a self-employed carpenter in his village. His father works as a day labourer in Israel, since he can earn more there than in the Palestinian territories. But he has no employment contract, nor any kind of insurance. That is the usual form of employment here. Many fathers hire themselves out to work in local quarries, mining the typical limestone used in house construction by Israelis and Palestinians alike. Others find employment in the fields – work that is arduous, poorly paid, and seasonal.

Ameer’s parents still support their son financially, but that is soon set to change. In line with the school’s approach, he has already established links with professional carpenters during his school training. And he aims to find a job with one of them as soon as he passes his examination. The West Bank does not currently offer a dual training system similar to the German concept, in which practical experience and school-based vocational training run side by side. Nevertheless, developing this stronger practical focus is one of the programme’s key objectives.

There are currently 10 state-run and around 50 private vocational schools on the West Bank. In addition to these, there are also six ‘competence centres’, co-developed by GIZ. These include the school in Jenin and the Palestine Technical College for Girls in Ramallah. These centres provide training for teachers from other schools, are very well equipped and are tasked with overall modernisation of vocational education and training through cooperation with companies. 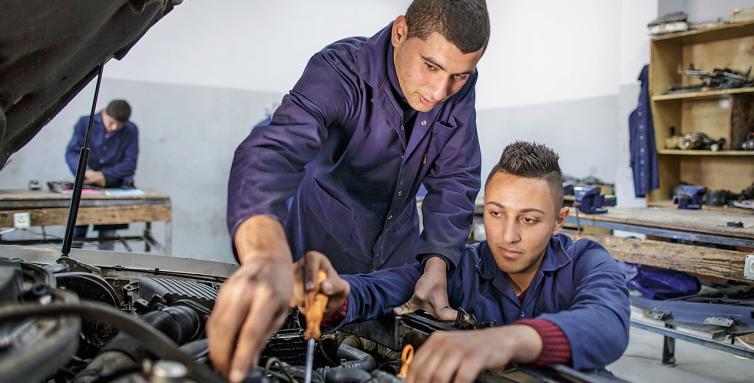 In an adjoining room, aspiring car mechanics are busy working on a white VW Golf. They are learning how to repair the alternator. Dressed in overalls, with slicked hair and oil-smeared hands, the young men are hard at work. Of course, all of them hope to open their own car repair shop one day. ‘And buy a BMW,’ one of them adds. The other gives a wry smile, perhaps finding his colleague’s cocky remark a little overambitious: ‘I’d settle for a Golf.’ There is every chance the pair will achieve their dreams. The street next to the vocational school is lined with garages, all of them filled with cars awaiting repair. 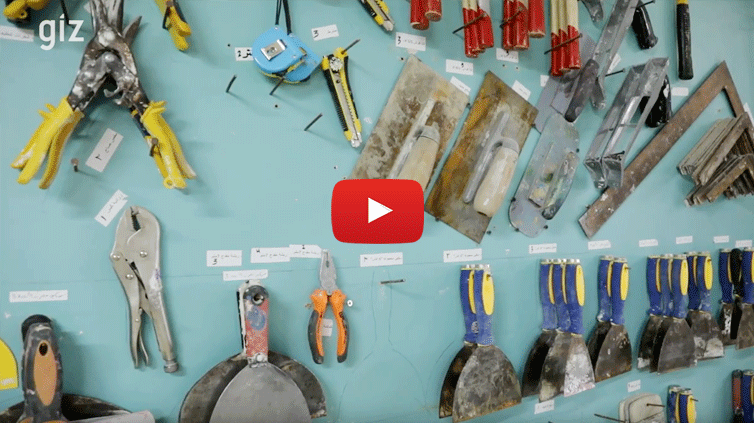 Sandos Abubaker, the principal at the school in Jenin, is now inundated with applications. Not long ago, TVET was looked down upon on the West Bank; today vocational schools are in demand. The school principal, an energetic woman of about 50, receives over 1,000 applications for 246 places. Her candidate selection procedure takes into account school grades, an entrance examination and an interview. She also considers students from the refugee camps and villages in Israeli-administered Area C. ‘We only take the best,’ she emphasises. It is now considered a mark of distinction to study at a vocational school.

Once a trainee, now a respected boss

Sami Alawneh was well aware of this and grasped the opportunity with both hands. He is 27 years old and a self-employed painter/decorator, drywaller and plasterer. He graduated from the vocational school just a year ago. Now he has between two and seven employees working for him, depending on his current order situation. Most of them come directly from the vocational school, just as he did. At the moment they are working on a construction site at new office and commercial premises in Jenin, installing the walls and ceilings for a new medical practice. Recessed spotlights, pastel shades – all tastefully and professionally done. Before going to vocational school, Sami had already worked on construction sites, so he has experience in a number of trades. Today he is a respected ‘boss’ – and father to a young son. He is also a role model for younger students. His teachers are proud of him. And without question, Sami is delighted with his own success. 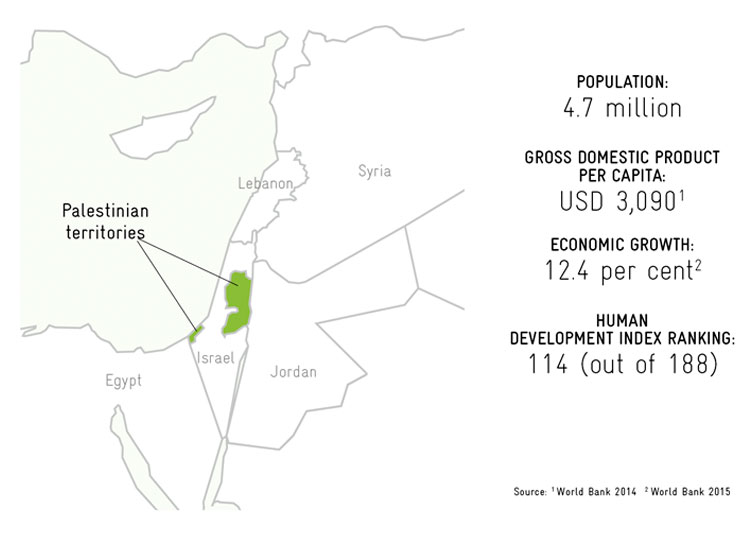 Young people in the Palestinian territories are particularly vulnerable to unemployment. The reason for this is the unstable economic and political situation and ­resulting low economic growth. At the same time, companies trying to succeed in this market struggle to find adequately trained skilled workers. For this reason, GIZ is working to bring technical and vocational education and training (TVET) more into line with the needs of the labour market. To achieve this, it collaborates with decision-makers, business associations and schools. It provides teachers with further training and school leavers with better advice, and gives curricula a more practical focus. 6,500 young adults will initially take part in the programme; other students will benefit from the teacher training and improved curricula.
Mehr auf giz.de:

GIZ in the Palestinian Territories