Climate change also poses a threat to Costa Rica. The country has an ambitious plan to confront the changes – with mangroves playing a key role.

Francisca Gutierrez Reyes splits open a palm-sized white clam with the long blade of her machete. Piangua they call them here on the Nicoya Peninsula on the Pacific coast of Costa Rica. The tiny woman skilfully levers the shell apart and holds up the two halves. Gutierrez Reyes, who is known to her neighbours only as Doña Panchica, collected the piangua at the beach. Judging by the 52-year-old’s weather-beaten face, it is clear she has spent most of her life outdoors. Until recently she spent her time foraging at the beach, but these days her place of work is her own small business – a mangrove nursery.

The nursery lies in the shade of a few tall trees. Nearby four large pigs roll around in the dirt. The nursery has neither walls nor a fixed roof, just a green tarpaulin stretched over two rows of wooden pallets, where the delicate mangrove saplings press against each other. One day these young plants will grow into a protective barrier of mighty trees.

As soon as Gutierrez Reyes’ saplings reach a certain height, staff from a reforestation project collect them for transplanting in the heavy, moist soil of the Nicoya Peninsula. This is Costa Rica’s approach to protecting its coastline and improving its carbon footprint. With the declared aim of becoming climate neutral by 2021, the Central American country already has lofty ambitions when it comes to reducing greenhouse gas emissions. To achieve that objective, Costa Rica needs projects like the one on Nicoya, where the aim is to plant around 5,000 mangroves per hectare. Gutierrez Reyes will supply several hundred of these. ‘I’ll sell the mangroves to Fundecodes,’ she says. Fundecodes is a local environmental organisation which relies on people like Gutierrez Reyes to help with reforestation.

The mangroves provide her with a much-needed supplementary income – her only other source is from the clams, crabs and shrimps she collects along the coast and exchanges for other goods. Gutierrez Reyes and most of her neighbours are among the 20 per cent of Costa Ricans who live below the poverty line. So in addition to its goal of coastal and climate protection, the mangrove project, which was launched in late 2014, also has an additional objective: to improve income opportunities for people in the region. It will benefit around 300 families.

Rise in sea levels, acidification of the oceans

As she does most mornings, Gutierrez Reyes has been out collecting clams among the nearby mangroves. There are few trees here now – years of ruthless exploitation have completely transformed the landscape. It started with the artificial lagoons, created by the salt farmers to extract thousands of tonnes of salt from the ocean. But making a profit from salt has become increasingly difficult since the 1980s, and one by one the saltworks have been abandoned by the salt farmers. In their place came the many shrimp farms, which involved the destruction of even more coastal forest. Then a few years ago, the government finally made any further deforestation of the mangrove forests illegal. But there has been little effort to replant the Nicoya forests – until now.

The Costa Rican authorities intend to restore a section of the devastated mangrove forest on Nicoya – with support from Germany. On behalf of the German Federal Ministry for the Environment, Nature Conservation, Building and Nuclear Safety (BMUB), GIZ is helping the Central American country to adapt to the impacts of climate change. In common with neighbouring states, Costa Rica also fears a rise in sea levels, acidification of the oceans and changed weather patterns. Even now, people on Nicoya complain that the dry season is lasting longer and the rainy season is starting later than they did just a few years ago.

The mangroves play a key role in Costa Rica’s efforts, since they are perfectly adapted to the coastal region. Mangroves drive deep and extensive root systems into the ground. They also provide an ideal habitat for many animal species: the salty waters of the flooded forests are now a breeding ground for fish, clams and shrimps.

Today over half the country is covered by forest, compared with just one fifth in 1987. Environmental awareness has also increased considerably in recent decades, not least because Costa Rica has benefited from ‘green tourism’. From the environmental point of view, the Central American country is leading by example. Other states in the region are doing less to protect the natural environment. In El Salvador, for example, only 13 per cent of the country’s land area is covered by forest.

Notwithstanding the successful restoration of the forests, the government in the capital San José wants to go even further and is aiming to turn as much as 60 per cent of the country’s surface green. For without the forests, Costa Rica cannot achieve its ambitious goal of climate neutrality. And since mangroves store up to 40 per cent more carbon dioxide than trees in a conventional dry forest, the Nicoya Peninsula will play a key part in ensuring that by 2021 Costa Rica will absorb the same volume of CO2 emissions as it produces.

Reforestation on the peninsula has involved close cooperation between German experts and the environmental conservation organisation Fundecodes, whose staff received advice and training in developing financial plans. Now in collaboration with the National System of Conservation Areas (SINAC), Fundecodes will continue implementing the successfully initiated mangrove project autonomously. 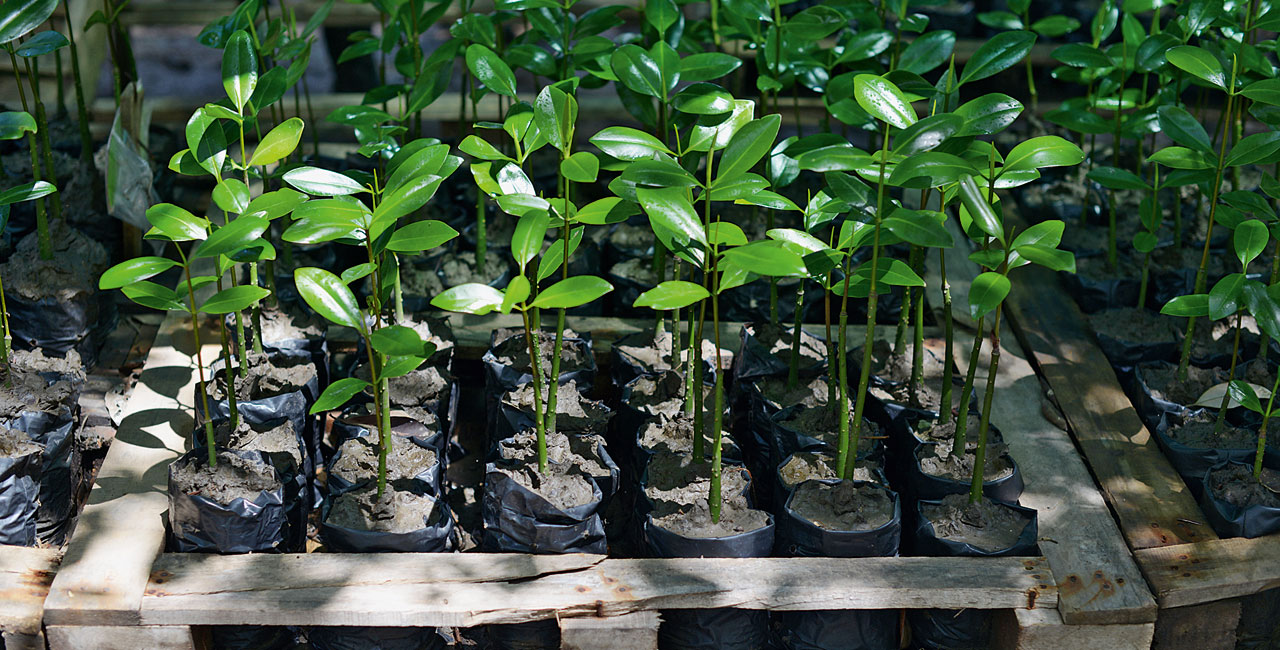 GIZ worked with SINAC to develop management plans for 17 marine and coastal conservation areas. For the first time, these plans incorporate adaptation to climate change. One quarter of the land area of Costa Rica is already under environmental protection, but much still needs to be done along its coastline and waterways. The government has already designated around 9,800 square kilometres as maritime conservation areas, with a further 3,500 square kilometres to follow in the near future.

But Costa Rica needs continued support, in particular with financing, if it is to implement the plans. The sum required is approximately USD 100 million. The country is aiming to raise half that figure on its own, with the remainder coming from private partners.

Long-term commitment to environment and business

‘There is a major gap in funding,’ says Michael Schlönvoigt of GIZ. ‘Collaboration with the private sector is urgently needed.’ The German company Ristic is providing finance for the planting of mangroves on Nicoya. Ristic exports organic shrimps from Costa Rica to Germany and the United States. It already has many shrimp farmers under contract on Nicoya, whose farms are located where once there were mangroves. Reforestation is clearly an environmental protection issue for the Bavarian company, but there is also a commercial interest: the project is recognised as environmental compensation for shrimp production on the peninsula, and this in turn is necessary for organic certification.

The company has made an initial commitment to providing USD 50,000. This will be used to restore 10 hectares of mangrove forest. Ristic has already announced that it will invest an additional USD 450,000 over the next 20 years to permit reforestation of a further 100 hectares in Costa Rica. The company is aiming to recruit other dedicated partners to this project from the German retail trade.

Habitat and protective barrier in one

So Francisca Gutierrez Reyes’ small nursery may not be the sole operation producing mangrove saplings for much longer. The entrepreneur is on her way to visit the area to be reforested with her trees. Wearing rubber boots covered in mud, she sinks up to her ankles in the soft soil, the ground around her crawling with a hundreds of brown crabs carrying aloft their oversized right claws. As soon as they sense the approach of Gutierrez Reyes’ feet, they scurry back into their tiny holes. Soon this is where the young mangroves from her nursery will be planted.

Although climate change mitigation for Gutierrez Reyes remains an abstract concept, she is well aware that the mangroves not only protect her family against storm floods and other maritime hazards, they also bring ‘the blessing of the ocean’. After all, most of the piangua clams she finds are at the foot of these trees. And more mangroves means more clams. ‘With just a squeeze of lemon,’ Reyes says, they are ‘absolutely delicious. And very healthy.’ She hopes one day to see Nicoya restored to the green paradise it once was – covered in a thousand mangroves. 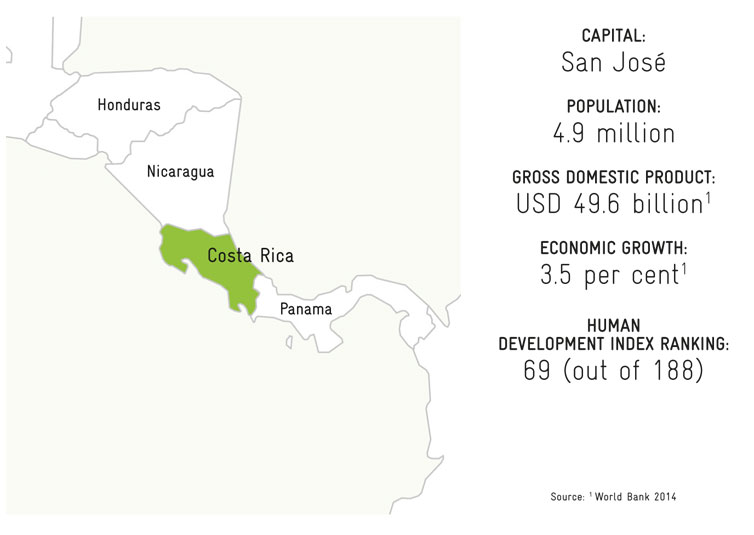 FOR PEOPLE AND CLIMATE

In order to mitigate the negative consequences of climate change in Costa Rica, GIZ is advising the country in a number of ways. For example, plans have been developed for the future of 17 marine and coastal conservation areas. In addition, the project has advised national partners on setting up five new protection zones and supported them in training their staff. Training courses were also organised for staff at a local non-governmental organisation involved in reforestation of the areas. Costa Rica is committed to involving private companies in financing protection zones. GIZ has also advised the German company Ristic AG on developing a financing plan. This will guarantee restoration of the mangrove forests and offer economic prospects for the local population.
More on giz.de