Power to the people

A hydropower plant supplies electricity to a village in northern Nicaragua for the first time. It has changed the place for good.

The people of Ocote Tuma now divide their lives into two distinct eras: the dark ages and the age of enlightenment, the period of monotony and that of opportunity. The eras before and after the advent of ‘la micro-turbina’, as they call their mini hydropower plant. As Freddy Orozco puts it: ‘They are two different worlds.’ Orozco chairs the committee in Ocote Tuma which manages the power plant that has fundamentally changed the lives of local people.

Electric light first arrived in the little village in the north of Nicaragua eight years ago. In those days, 17 families inhabited the village that nestles amid the landscape’s tropical rainforests and rolling green hills. Today there are 70, and the number is rising. ‘We have population growth of 25 per cent per year,’ Orozco says. 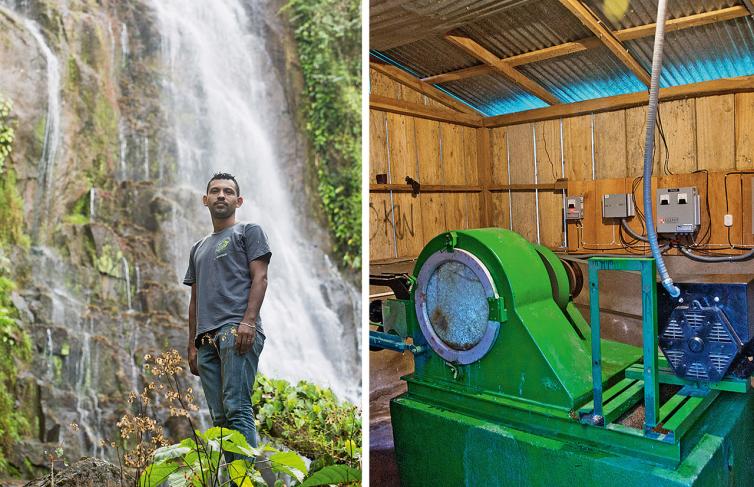 And yet Ocote Tuma is not exactly the centre of the universe. It takes about six hours by car to the capital Managua, three of them on adventurous, bumpy, winding dirt tracks. The route takes us past simple wooden huts, mango trees and small cocoa and banana plantations. After Haiti, Nicaragua is the second-poorest country on the American continent. Well over a million people here have no electricity.

And that is how it was in Ocote Tuma, until in 2007 the community collaborated with the central government to build a small power station. They were supported by GIZ on behalf of the Directorate-General for International Cooperation at the Dutch Ministry of Foreign Affairs. Above the village is an idyllic waterfall that tumbles down from a great height. So the inhabitants created a reservoir to store the water, laid a pipeline to the village and connected it to a hydroelectric generator. In total, the hydropower plant cost USD 40,000.

Part of the international project EnDev

The project is part of an international initiative with the goal of providing remote communities in Latin America, Africa and Asia with sustainable electricity. It is financed by the German Federal Ministry for Economic Cooperation and Development in cooperation with the Dutch Directorate-General and other donors from Norway, Australia, the United Kingdom and Switzerland. Seven hydropower plants have been built in Nicaragua alone. But none are as successful as the one in Ocote Tuma. 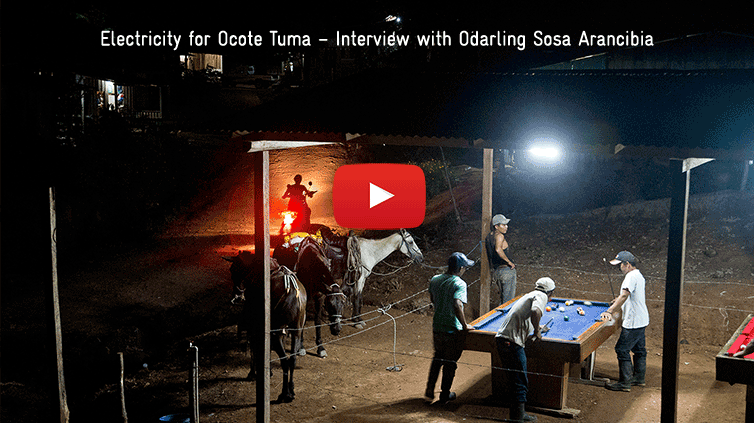 For the village has reinvented itself. Every day people are moving here from the surrounding area to enjoy the wonders of electricity. Suddenly the villagers are discovering opportunities they never had before.

When she heard about her village getting electricity, she returned

Victoria Jarquín knows all about that. Thanks to the new electricity supply, she was able to quit her job as a domestic worker and set up a business of her own. She now owns a ‘pulpería’, a sort of general store. Her business has no name, the sign above the door says simply: ‘Bienvenido’ – welcome! It is Tuesday morning and the cheerful shop owner has plenty of trade. An elderly lady is buying a cold drink, a boy wants a kilo of malanga, a root vegetable typical of the region. Jarquín weighs it out, puts the vegetable in a bag and hands it to the boy. ‘Nine córdobas,’ she says, around EUR 0.30. Jarquín’s store sells everything from scrubbing brushes and blouses to cuts of meat. ‘My bestsellers are cold drinks and chicken,’ she explains. She keeps both of these in the chiller cabinet, which her store now can run thanks to the electricity supply.

Jarquín was born 35 years ago on a farm near Ocote Tuma. People used to get up at sunrise and go to bed at sunset. So as a teenager Jarquín looked for an escape and headed to the district’s main town Waslala, where she took a job as a domestic worker. She was away for twelve years. But when she heard about her village getting electricity, she decided to return home immediately: ‘I just had to take advantage of such a great opportunity,’ she explains. Her father raised a microloan from the bank, enough to procure the building and her first items of stock. That was four years ago.

As a domestic worker she earned the equivalent of around EUR 100; these days she has roughly three times that in her cash register at the end of the month. Sometimes more. ‘And I’m my own boss, so I can make my own decisions. It’s wonderful,’ she says with an infectious laugh. ‘I’m so proud of my business.’

On every street corner in Ocote Tuma, people have stories like Jarquín’s to tell, stories of improvements and new opportunities. The school principal describes how he can now hold lessons in the evenings thanks to electric light; the village joiner can make beds for the villagers and desks for the school because he has access to powerful electric tools; and in Ocote Tuma they are particularly proud of their health centre – this too would not exist without electricity. Every day a doctor and nurse provide health care for 80 patients, many of them travelling long distances on foot or on horseback to attend the clinics. ‘Ocote Tuma is a good example of how crucial energy provision can be for the social and economic development of a community,’ says Javier Gutiérrez from GIZ in Nicaragua.

All issues concerning the ‘micro-turbina’ are discussed by the village’s hydropower plant committee. Made up of six men and three women, the committee decides on matters such as the price of electricity or how many household appliances and televisions each subscriber can connect. One-time connection to the electricity grid costs 3,500 córdobas (around EUR 117), thereafter the basic tariff is EUR 2.65 per month. That includes four energy-efficient light bulbs and electricity to power one television set.

The Energising Development (EnDev) initiative creates access to renewable energy for people who are living without electricity. Since 2005 it has reached 13.9 million people in 24 developing countries. Its many positive outcomes -include improvements in health, for example through replacing coal-fired stoves. In addition to private households, electricity has been supplied to 16,000 social institutions, including many schools and health centres.

But the committee also sets the level of fines for anyone who breaks the rules. ‘Electricity is precious and in short supply,’ says Orozco, the chair of the committee. The turbine generates just 13 kilowatt-hours of energy. To put that into context, one kilowatt-hour is not even enough for an hour of vacuum cleaning. The villagers therefore accepted the committee’s proposal to switch off refrigerators and freezers every day from 5 pm to 8 pm. The onset of darkness is the peak period for energy use, when people come home from work and turn on the television to watch their ‘telenovelas’ and the news. ‘So we have to economise,’ insists committee chairman Orozco. But many of the villagers complain: after all, in tropical temperatures food such as milk and meat spoil rapidly without refrigeration.

Developing and optimising the  electrical supply

That is not a problem for Macial Borges and his small family. ‘Four light bulbs and a radio,’ is all he has – but it’s enough. ‘I pay the minimum,’ says Borges, a muscular, 35-year-old construction worker in a pristine white shirt. Borges lives with his wife and young son in a spacious but simply furnished wooden hut on the edge of Ocote Tuma. Newly hatched chicks run about beneath their feet.

A small transistor radio is the focal point of the house. It sits on a table right opposite the entrance, like a modern altarpiece. Above it hang the family portraits, a mirror and the blue-and-white flag of Nicaragua. ‘Our six-year-old can now do his homework after dark,’ says Borges, ‘and I’m planning to buy an electric sewing machine for my wife.’ The couple hope that will bring them some additional income.

Freddy Orozco and the committee are currently deliberating on developing and optimising the electricity supply so that it remains stable and sufficient to meet everyone’s needs. They do not want to restrict the ongoing influx of new families. Options include a more powerful generator, a second turbine, or further restrictions on electricity consumption. For the time being, however, the capacity of the power plant will be increased thanks to the technical assistance of a Nicaraguan non-governmental organisation that specialises in renewable energies. ‘We can tease a few more kilowatts out of the plant yet,’ says Orozco. But one thing is for sure: no one in Ocote Tuma will ever want to go without electricity again. 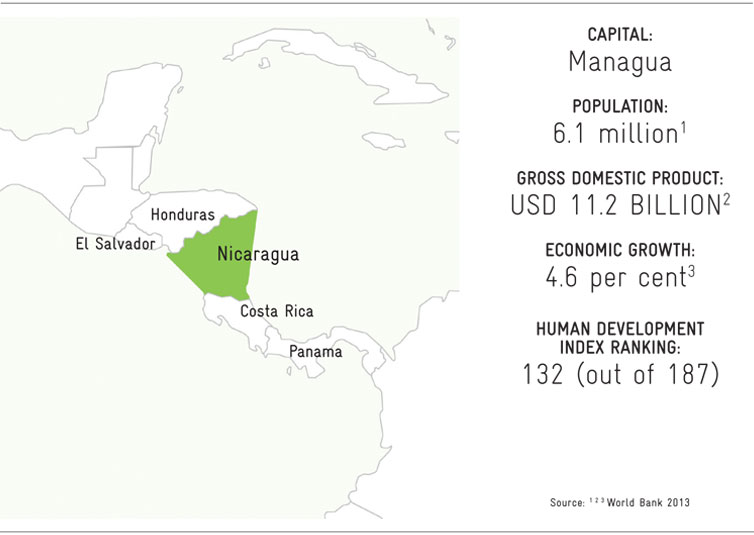 THE POWER OF RENEWABLES

EnDev Nicaragua is funded by the German Federal Ministry for Economic Cooperation and Development, the Directorate-General for International Cooperation at the Dutch Ministry of Foreign Affairs, the Norwegian Ministry of Foreign Affairs, the Australian Department of Foreign Affairs and Trade, the UK Department for International Development, and the Swiss Agency for Development and Cooperation. The programme provides support to more than one million people without access to a modern electricity supply with developing renewable energy sources. It provides electricity to private households, schools, health centres and businesses using photovoltaic systems and micro hydropower plants. 2,700 solar systems had been installed in Nicaragua by late 2014, resulting in benefits for 15,660 people. 10 hydropower plants supply energy to 5,519 inhabitants in rural areas. 245 educational and social institutions now have electricity for the first time.
Mehr auf giz.de: