There is a shortage of geriatric nurses in Germany. In Viet Nam many young people cannot find a job. A vocational training project helps both sides.

She arrives every morning at 6:30 am wearing black leggings, a red anorak and a small rucksack slung across her shoulder. At just 1.60 m tall, you might easily mistake her for a schoolgirl, though in some ways that is exactly what she is. For Thi Thuy Ngan Kieu has come from Viet Nam to learn. The 25-year-old is training to become a geriatric nurse at Leonhard Henninger Haus, a residential nursing home in the Munich suburb of Schwanthalerhöhe.

She is one of 100 young men and women taking part in a pilot project geared to securing skilled workers. The project is organised by GIZ on behalf of the German Federal Ministry for Economic Affairs and Energy (BMWi) in cooperation with the International Placement Services (ZAV) of the German Federal Employment Agency. Germany already has a shortage of geriatric nurses: in 2014 there were just 39 unemployed nurses for every 100 vacant positions. By 2030, there could be as many as half a million unfilled posts. The southern and eastern EU member states are experiencing a similar demographic trend to Germany. At the same time, however, many people in Viet Nam have no jobs. So one obvious solution is to provide training and offer rights of residency in Germany. In September 2013, Ngan and her colleagues – mostly women, but also a few men – began their new lives in Germany. Training courses were held in Bavaria, Baden-Württemberg, Berlin and Lower Saxony. A second group arrived in Germany in summer 2015. In future it is anticipated that the nursing homes themselves will play an active role. 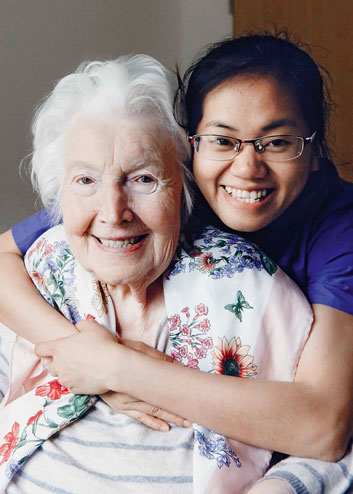 Ever since the first generation of ‘guest workers’ arrived in Germany in the 1960s and 1970s, however, the country has grappled with the problems of migration. So those responsible for the project – including the Ministry of Labour, Invalids and Social Affairs (MOLISA) in Hanoi – are paying close attention to ensure that all stakeholders benefit, both now and in the long term.

‘What excites me most is that they have the same starting conditions as Germans in professional terms,’ says Reinhild Renée Ernst from GIZ. The Vietnamese taking part in the project are not engaged as cheap auxiliary workers. They learn the job from scratch and earn in line with the going rate. And contrary to popular perception, the pay is not at all bad: on completion of training, a qualified nurse can expect to take home around EUR 1,800 per month. The Vietnamese also have the same opportunities for promotion. Furthermore, after five years’ work – including the training period – they will be eligible for permanent residency status.

Direct entry into the second year of training

Ngan quickly takes the lift to the third floor of the Leonhard Henninger Haus care home and disappears into the changing room. She reappears wearing the uniform of a nursing assistant: a purple smock and trousers with white pumps. Her long straight hair is tied back in a ponytail. Her first task: the wake-up call. ‘Good morning, ready to get up?’ she calls softly into the first dimly lit room. She helps her charge get out of bed, puts her feet into her slippers, brings over the walking frame, accompanies her first to the bathroom and then to the breakfast room. Then it’s off to the next bedroom.

She has grown used to the routine now. Nevertheless, ‘Nani’, as she is known to the residents and colleagues, will never forget the difficult first few months. Her biggest problem was the language. ‘It’s so complicated,’ she says, ‘a different melody.’  Like all participants in the project, she was required to complete a six-month German course before her arrival in the country – but that was nowhere near enough to prepare her for everyday life. Especially as the Vietnamese go straight into the second year of the course on account of the professional experience they already have. Applications are accepted only from trained nurses and care assistants. The purpose of this is to ensure that participants have a clear idea of what lies ahead. For in Viet Nam, where grandparents and great-grandparents are traditionally looked after in the family, the career of geriatric nursing is not yet fully established.

As the youngest of six children, Ngan grew up in Ho Chi Minh City, formerly Saigon and Viet Nam’s largest city. She read about the project ‘on the internet’, she says. By that time she had already completed her training as a nurse. But she knew little about Germany: ‘Somewhere in Europe, possibilities for travel, and, well, famous for beer.’ She tells how she was invited to a Bavarian restaurant when she first arrived and there was roast pork on the menu: ‘This big’ is how she remembers it, her hands making a circle the size of a waggon wheel, and it tasted salty. ‘I didn’t like it.’ That sentence alone shows how well she has adapted to her new life. In Viet Nam it would be considered impolite to say such a thing, but not in Germany, she has learned. ‘Germans are always very direct.’

‘At the beginning, whenever we met in the corridor she would look down and walk by nervously,’ says care home manager Frank Chylek. Respect for superiors is much stronger in Asia than in Germany. On the other hand, there is also a greater sense of community in the workplace. Ngan was lucky to have Zuhra Iljkic as her ward manager. Like many of the nurses, Iljkic comes from Bosnia, and she leads her team of 14 nurses with maternal affection. ‘I just integrated Nani into the team,’ she says simply. Part of her approach was to insist that everyone communicated only in German – to ensure no one felt excluded.

It's all about the right techniques

The Vietnamese nurses also had to adapt to European customs in terms of greetings and personal space. Physical contact in Viet Nam is only common between family members and very close friends. Ngan has adjusted well. ‘She greets us all with a kiss, just like the Bosnian girls,’ says Iljkic.

It is breakfast time for the nursing staff. Ngan puts bread and yoghurt on the tablecloth with the pink tulips. ‘N’ Guadn,’ (‘enjoy!’) she says to her colleagues in perfect Bavarian and asks them to pass the jar of nutella. A nurse from Angola chuckles: ‘You trying to put on weight?’ It has been an issue with Ngan since the outset: some of the residents didn’t want to have her as their carer because they thought the tiny Vietnamese wasn’t strong enough to lift them out of the wheelchair. ‘But there are techniques you can learn,’ says Ngan self-confidently. Liselotte K., a cheerful 91-year-old with immaculate white hair and a neat neck scarf agrees unreservedly – she was Ngan’s model for the nursing exams. ‘Nani just uses a bit of momentum,’ she says, ‘she is a wonderful nurse.’ 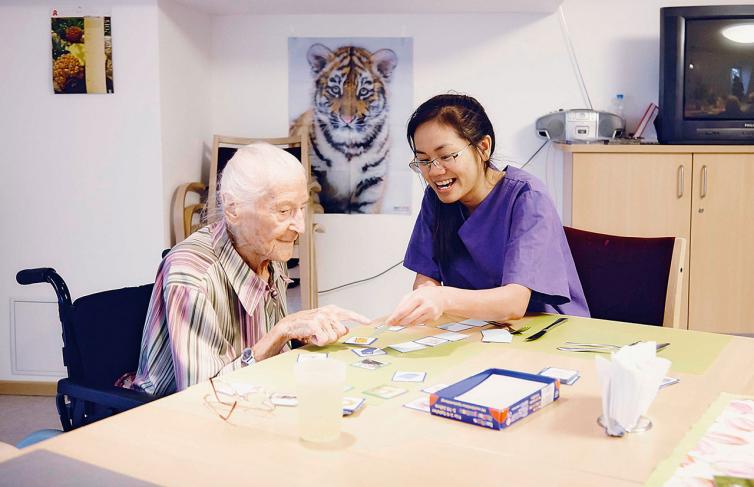 Picture gallery: Many day-to-day responsibilities of the Vietnamese nurses.

Everyone at the home says how friendly the Vietnamese nurses are. And for her part, Ngan says she has never experienced any hostility towards foreigners. In any case, 60 per cent of the nursing staff at the home are from a migrant background. Any minor irritations have largely been to do with language or because they were new to the job: unfamiliar faces can be unsettling. The oldest resident on Ngan’s ward is 105 years old; and quite a few of her charges suffer from dementia.

Ngan pauses when she finds Hildegard S. sitting in her wheelchair in the recreation room, her head slumped on her chest. She carefully helps the 79-year-old to sit up straight, pulling her shoulders back: ‘It’s better for you to sit up straight,’ she chides gently. Then she kneels down to be at eye level with the elderly lady. When she starts to sing, Hildegard S. immediately joins in: ‘Kein schöner Land in dieser Zeit…’ It’s a song Ngan learned at her vocational training college. Along with an assortment of idioms and expressions for memory training. ‘At night…,’ the Vietnamese begins, ‘…all cats are grey,’ responds Hildegard S.

Ngan loves combing the ladies’ hair, painting their nails and helping them put on eye makeup and lipstick. Then they giggle like best friends. But there is little time for more than that, since the working day is structured with metronomic precision. Once breakfast is served, her first task is to feed and wash the bedridden residents and change their bed pads with the help of a colleague. Next, she sorts out the pills and medicines. Then it’s time to prepare lunch. Ngan ties a bow in her white plastic apron and serves up the soup: soup spoons to the left, mugs to the right. She looks tired.

Almost all participants are keen to stay in Germany

So how does she spend her time when she gets home around 3:30 pm? ‘I put my feet up,’ she says without hesitation. She shares a three-room apartment with the three other Vietnamese nurses undergoing training at the Leonhard Henninger Haus care home. There they listen to music, play games on their mobile phones and skype with their families back in Viet Nam. And in the evening they cook together: rice dishes and ‘pho’, the traditional Vietnamese noodle soup. Last year they all travelled to Paris to visit a Vietnamese friend. It was a rare luxury, since otherwise the young women save up what they can to support their families back home. 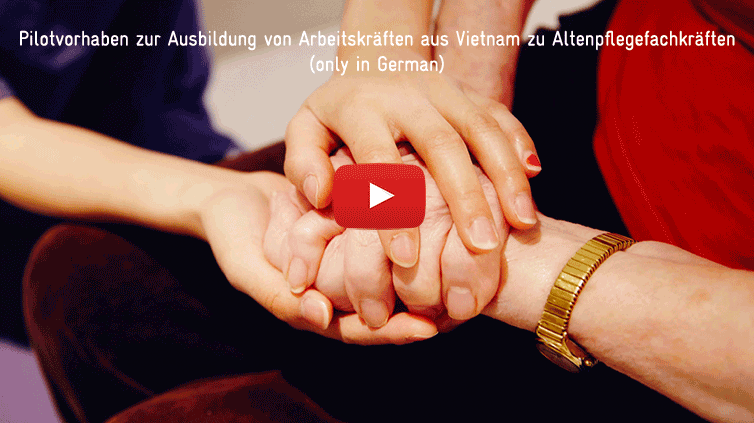 ‘Their families have high expectations of them,’ explains care home manager Chylek. So the trainees have a good sense of discipline and hard work. ‘They even wanted to discuss the basics of palliative care with me during our Christmas party.’ So far, none of the 100 participants has returned home early, almost all of them are keen to stay. Ngan too. Like the others, if she passes her exams she is assured of a job. Looking to the future, she says: ‘If I start a family here, my children will have better opportunities.’ And for that, she is prepared to put up with the occasional feeling of homesickness.

By the time the second group of participants from Viet Nam arrived in August, weaknesses in the first training course had been addressed. The newcomers now benefited from a whole year of German tuition. Chylek is enthusiastic about the continuation of the project: ‘I’m taking another four trainees.’ He hopes to set up tandem training, pairing new arrivals with the pioneers from the first group. For Ngan it will be an acknowledgment of how far she has come.

As part of a pilot project initiated in autumn 2013, a group of 100 young people from Viet Nam are training to be care assistants for the elderly. After completing a state-funded language course at the Goethe-Institut in Hanoi, participants receive training at care homes in Baden-Württemberg, Bavaria, Berlin and Lower Saxony. Additional language courses and intercultural programmes help them adjust to their new lives. Regional coordinators working in the same field and Vietnamese-speaking mentors provide support to the trainees and their practice partners. This successful pilot project continued in August 2015, when 100 new trainees started their training in Germany, having completed a one-year German course. Viet Nam has a very young population and falls a long way short of employing its entire potential workforce in its labour market. For this reason, Viet Nam officially promotes foreign employment for its citizens. Many young people are keen to take up training and a subsequent period of employment in Germany. This project uses existing connections with Vietnamese administrations. Furthermore, it creates attractive openings for investment and cooperation for German businesses. Trainees are selected in collaboration with the Vietnamese Ministry of Labour and the International Placement Services (ZAV) of the German Federal Employment Agency.
More on giz.de