Germany is offering support to the people of Mali as they move towards reconciliation and stability.

There is one mother’s fate that Dr Yaya Diarra simply cannot forget. The woman was living in a village in Gao, in the north-east of Mali in 2012, when the area fell first to separatist rebels and then to Islamist terrorists. Her husband, a government employee, was one of the first to be threatened. The family decided to flee, but they were caught by armed attackers, who stole everything they had. The fighters shouted at them to run down the hill. The parents turned and ran with their children. Just as the woman began to hope that they had really escaped with their lives, the men behind them began to shoot. Her husband and one of their twins fell. They died the same night. The woman too was hit. By sheer force of will, she managed to drag herself to the next village. Today she lives in Bamako, Mali’s capital city, where she has received psychological support from Yaya Diarra after reporting on her dreadful experiences to the Truth Commission. 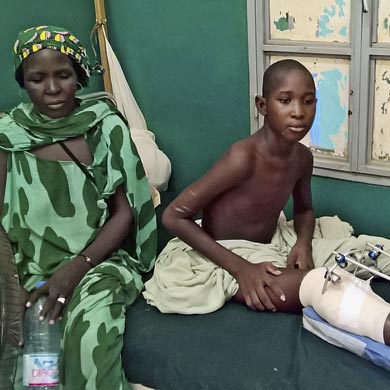 The young patient and his mother are some of the 100,000 people in Gao region for whom the local hospital is the only source of medical assistance.

In this multi-ethnic state, the Commission is intended to foster reconciliation and strengthen democratic structures. Many of Mali’s 18 million inhabitants have been traumatised by the unchecked violence and severe human rights violations they experienced during the civil war. ‘We must work with these sections of our society to build trust. The Truth Commission must take a proactive approach and seek contact,’ explains Ag Attaher, who is in the oasis town of Timbuktu to talk to victims of the atrocities. ‘It is a huge challenge, because many people have been victims of rebellion and violent repression more than once. They suffered for years, while the state did nothing. Now they no longer believe that public bodies will help them.’ Like Diarra, Attaher has been trained by GIZ to work with traumatised individuals, an extremely difficult task. Today, they both work for the state Truth Commission. More than 100 Commission employees have benefited from training in interview techniques and victim support. So far they have recorded statements from about 6,000 witnesses of severe human rights violations.

Alongside further stabilisation measures, these efforts to address Mali’s recent past and campaigns to inform the people about the peace agreement are at the heart of GIZ’s engagement in the country on behalf of the German Federal Foreign Office. Support for peaceful and democratic development in Mali is part of Germany’s long-term engagement. Parallel to this, though, Germany is providing direct support for the Malian people. One example is the measure financed by the German Federal Ministry for Economic Cooperation and Development that is improving water supply and sanitation in rural parts of the country.

Working in every region with all sections of the population

GIZ experts are working in every region of Mali, with all sections of the population, often with the support of local partners. They have already been able to reach several million Malians. Germany’s work in this fragile state is based on closely interconnected environmental, foreign, development and security policies. That is why the Federal Republic of Germany is not only engaged in civilian missions in Mali: Bundeswehr contingents are also part of the EU’s EUTM mission and the United Nations Multidimensional Integrated Stabilization Mission in Mali (MINUSMA).

But since the crisis first erupted in 2012, Mali has been unable to offer its people safety or security, and it still has a long way to go. Government troops and UN soldiers patrol dusty roads, armoured vehicles feature prominently, while news agencies report one terrorist attack after another. The peace agreement between the government elected in 2013 and some of the armed groups is being implemented sluggishly at best. The volatile security situation is an obstacle to development in this country, which is already one of the poorest in the world (see box). And large sections of the population refuse to recognise the government, which has no presence in some parts of the country, and in others is able to provide only limited services for the local population.

One example is the restoration of the region’s only hospital. Today the hospital’s toilets and washrooms are once again operational, while the courtyard and other parts of the building in Gao are no longer flooded during the rainy season. Some 100,000 people benefit from these improvements. Two of them are Rachida Maïga and her husband. ‘A year ago I brought my husband here to the hospital. The toilets and showers were in a deplorable state. It was disgusting,’ she tells us. ‘But now everything has been renovated.’

Germany’s engagement is designed first and foremost to restore trust between the opposing groups in the north of the country. In the citizens’ dialogue, facilitated by GIZ, participants agreed on common projects that serve to foster reconciliation and social cohesion. In Gao, a particularly critical region, each of the 19 municipalities had implemented at least one of these projects by the end of 2017. More than 150,000 people benefit. 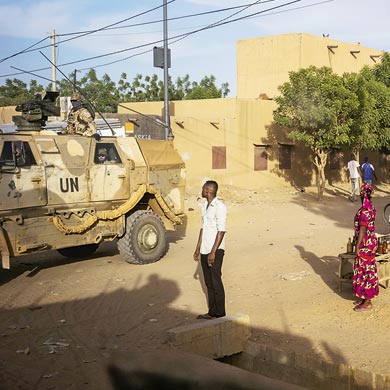 The concrete form this can take is demonstrated by the orchestra in the new district of Ménaka, established in the wake of the crisis. The orchestra has received guitars, drums, a piano, tuba and other instruments. Now the musicians can play again at weddings and in competitions. Why is that so important in a crisis-ridden country like Mali? ‘Music is an important and integral part of our identity. It is very important for the pride of the region,’ explains Mahamadou Assalia Maïga, Ménaka’s musical director.

In the past, Mali was known around the globe for its vibrant musical culture thanks to the Festival au Désert. In 2012, Islamist terrorists banned dancing and music for entertainment in the areas under their control. The musical instruments for Ménaka are to bring the people together again. ‘They belong to the entire region, and everybody may use them,’ stresses Monsieur Maïga.

Peace agreement in the form of sketches

Part of GIZ’s broad-based approach in Mali involves providing information about the peace agreement signed in Bamako in 2015. Many Malians expect nothing of the agreement – for the simple reason that they know nothing about it. That is why GIZ and the Malian Ministry of National Reconciliation have launched an information campaign. A drama group plays small venues, explaining the contents of the peace agreement in the form of sketches performed in the local languages. In this way even illiterate Malians can find out about the peace agreement. Some 55 performances to audiences of up to 1,000 have already introduced tens of thousands of Malians to the agreement.

Many in the audience hear for the first time about the work of the Truth Commission during these performances. It plays an important part in implementing the peace agreement. ‘In spite of the ongoing crisis in the country, or perhaps precisely because of it, it is crucial for all Malians to establish the truth and come to terms with everything that has happened,’ says Ouleymatou Sow Dembele, commissioner for victim support. ‘A local proverb says: an infected wound cannot heal. For us that means that there can be no lasting peace until we establish the truth and no reconciliation without redress.’ But she knows herself how much courage is needed to speak out against the perpetrators.

The mother, whose story Yaya Diarra can never forget, recognised the leader of the group that murdered her husband and her child. Their former neighbour still lives unchallenged in their village. The woman is now ready to speak out at a hearing of the Human Rights Commission – so that the truth is heard. 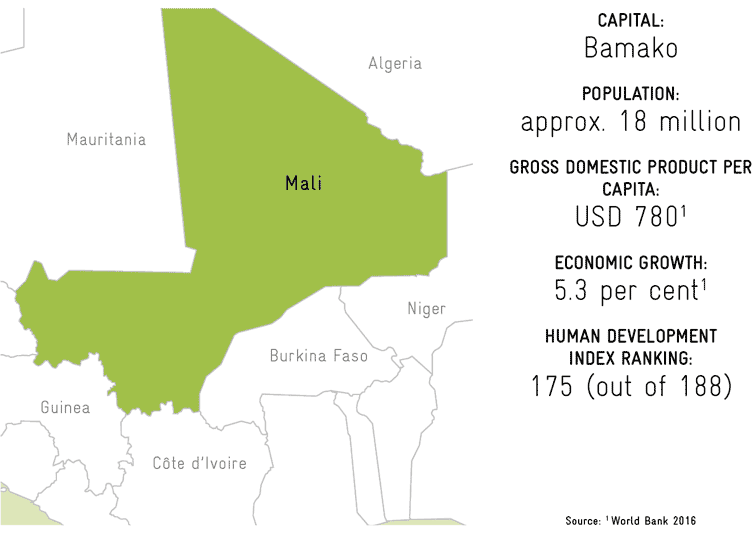 Projects: Supporting the stabilisation and peace process in Mali, Sustainable development of the water and sanitation sector in Mali
Commissioned by: German Federal Foreign Office, German Federal Ministry for Economic Cooperation and Development
Lead executing agencies: Mali’s Ministry of National Reconciliation, Ministry of Energy and Water, Ministry of the Environment
Term: 2016 to 2019 and 2015 to 2019

GIZ is assisting Mali on behalf of the German Federal Foreign Office to stem the conflict that erupted in 2012 between the Tuareg, Islamist rebels and the government. The contents of the peace agreement are being taken to the people across the country in the form of plays and brochures in 13 of the country’s languages. So far the message has been brought to hundreds of thousands of people. GIZ is also training the staff of the Truth Commission. They have already recorded statements from more than 6,000 witnesses of human rights violations. The water project implemented by KfW and GIZ, and financed by the German Federal Ministry for Economic Cooperation and Development, is helping restore state services. Since 2015, about 900,000 people have been given access to safe drinking water and sanitation.
Mehr auf giz.de:

GIZ in Mali
Doing business with GIZ: Peace for Mali