A line of bent figures moves slowly across the horizon, wearing brightly coloured headscarves and straw hats to protect them from the sun. Even in the early morning, the heat in the fields is intense. ‘Eighty per cent of the work here is weeding,’ says Leith Tlemcani. ‘And since that has to be done by hand, we do it early in the morning.’ By 10 o’clock it’s already too hot out in the fields in summer. 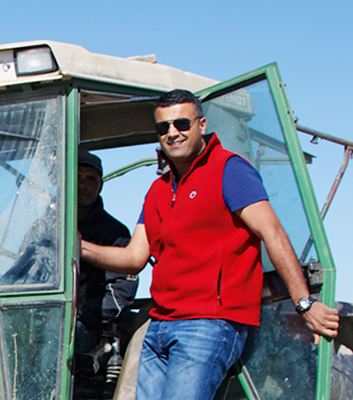 Help with the harvest: young entrepreneur Leith Tlemcani beside a vintage German tractor.

Tlemcani’s company Herbiotech farms more than 150 hectares in a plain near the city of Kairouan, around two hours’ drive south of ­Tunis. The company specialises in organic farming. Which is why two thirds of his 100 staff are busy in the fields, pulling up the weeds that proliferate between the parsley, dill and mint. ‘Many farmers in the region have turned to organic farming out of financial necessity,’ Tlemcani explains. Few can afford fertilisers and weed killers. Most try to eke out a living with very little land. Tlemcani’s foreman is a simple farmer from the region. ‘He knows this soil better than any foreign expert.’

'We can grow all year round'

But large-scale organic farming – with German, Japanese and American certification, as is the case with Herbiotech – is still the exception in Tunisia. Within a short ­period of time the company has established itself as the country’s leading producer of dried herbs. Since the Tunisian market for organic products is still very much in its ­infancy, almost all the herbs are shipped for export. ‘In Tunisia we have the advantage that we grow all year round and can deliver fresh produce even in the depths of a ­German winter,’ the Tunisian manager ­explains. Around half of his herbs will end up on German dining tables. One of ­Tlemcani’s buyers, for example, is the ­medium-sized organic business Lebensbaum from Lower Saxony.

German customers, German organic ­labels and German machinery – the entrepreneur Leith Tlemcani has massively ­expanded his contacts in Germany. He adopted the German organic farming model from the outset. Since 2015, when the 36-year-old with a PhD in biology took part in the Manager Training Programme initiated by the German Federal Ministry for Economic Affairs and Energy (BMWi), his business links with Germany have grown ever stronger.
GIZ is coordinating the programme on behalf of the ministry. Tlemcani is one of ­almost 100 Tunisian managers from a wide range of industries to have benefited from GIZ-led preparations for initiating business with German companies and entering into cooperation arrangements. The programme has already assisted more than 11,000 managers in 19 countries.

German companies have traditionally invested strongly in Tunisia. Currently about 250 German companies operate in the country, providing jobs for around 55,000 Tunisians. Germany is Tunisia’s third largest trading partner, with bilateral trade in 2016 worth just over EUR 3 billion. The German Government is committed to stepping up this ­cooperation. This was also highlighted by Chancellor Angela Merkel’s visit to ­Tunisia in March 2017. Now that the North African country has achieved the political transition from dictatorship to a democracy with a modern constitution, the focus is on overcoming the economic challenges. 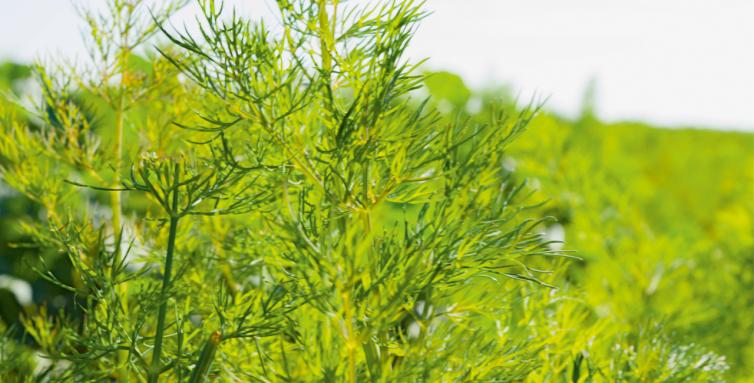 Leith Tlemcani is already contributing to the success of German-Tunisian trade. ­During the manager training course in ­Germany, he explains, he was able to establish initial contacts with several large customers. Before the course, he recounts, he was a scientist through and through. ‘The programme allowed me to acquire the ­managerial knowledge I needed and develop a clear strategy for my company.’ Since then he has strengthened his contacts with Germany. Tlemcani regularly attends trade fairs in the country and his company website has even been translated into German. After all, most of his customers are in Germany.

'To begin with we had neither market data nor experience'

Tlemcani also bought his machinery in Germany. ‘Our harvesting machinery is ­always a source of amusement,’ he says with a laugh. He gestures towards the vehicle which rolled off the production line in 1961. The tractor’s engine is at the rear to give the driver a clear view of the crops to be harvested. ‘People often stand and stare in amazement, wondering what we actually do here.’ A new machine would have cost at least 120,000 dinars (or over EUR 41,000) – a lot of money for the fledgling company. The vintage tractor cost only a third of that, and Tlemcani also sourced his other machinery in Germany at an affordable price.

As soon as the herbs have been ­harvested, they are packed and taken to the factory in Bouarada, a two-hour drive from the fields. Here, southwest of Tunis, Tlemcani originally set up his company in 2013. Tlemcani and his partner Mehdi Elouaer started out producing olive oil and essential oils, before deciding to focus on dried herbs in 2014. ‘To begin with we had neither ­market data nor experience. We thought everything would be much easier,’ Tlemcani admits. Knowledge acquired during the manager training course came in useful. Herbiotech built a new production hall and invested in machinery to sift and pack the herbs. Production began in 2015. 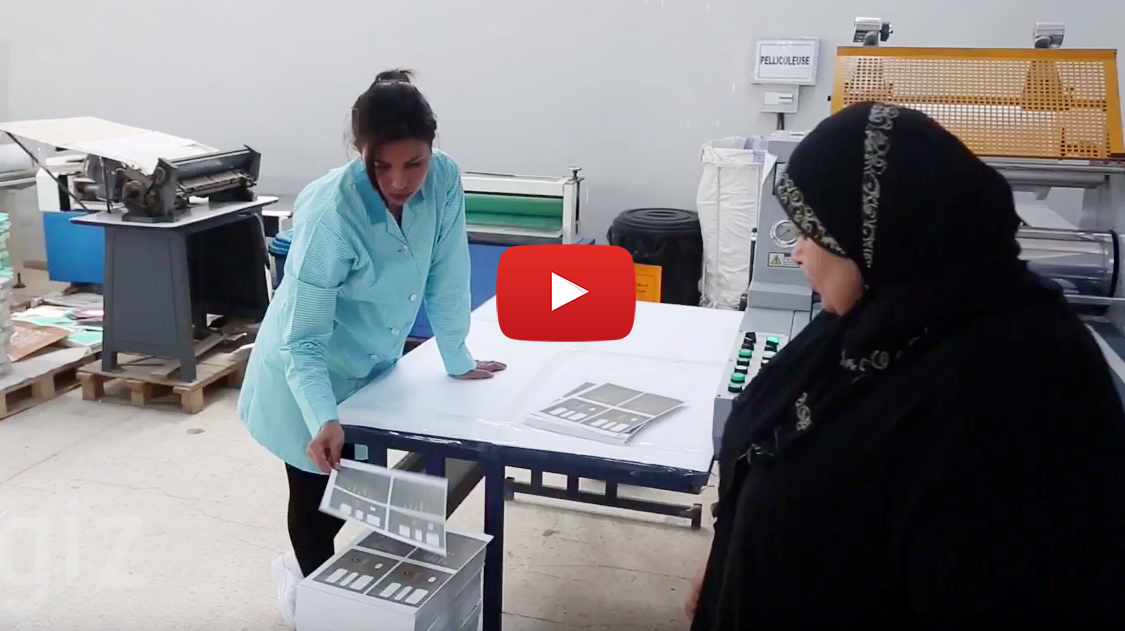 For Nizar Jallouli, too, the Manager Training Programme came at a time of professional upheaval in 2015 – in other words at exactly the right time. The computer scientist had set up a printing business in 2000 with a view to printing children’s books published by his father more cheaply. ‘I was young, I had no experience. The banks had no confidence in me and the other printing houses did everything they could to make life as difficult as possible for me,’ says the 41-year-old in retrospect.

So in 2008 he decided to go abroad. When he returned to visit his home in the port of Sfax in 2014, a ‘For sale’ sign hung above his former print works. ‘That almost broke my heart – so I gambled.’ He persuaded his father to give him a chance.

Eco print as a niche

This time Jallouli was determined to probe a niche market: green printing. From plant-based print inks to waste disposal and paper imported from a German business partner certificated with the Blue Angel eco label, everything would be as environmentally sound as possible. And so the once virtually bankrupt printing house Nouha Print became Nouha Eco Print – the African continent’s only environmentally friendly printing works, says Jallouli with pride.

Most of his customers today are subsidiaries of foreign companies in Tunisia, ­including the German-Tunisian Chamber of Industry and Commerce and German companies with manufacturing operations in Tunisia. ‘It is easier for them to print ­brochures here directly than to ship them from Europe.’ Jallouli took a risk for his first contract: although he only needed 100 kilograms of paper, the minimum quantity he could order was 18 tonnes. He imported the paper anyway – and his first ever customer is still one of his biggest today. Not everyone was enthusiastic, however: his Tunisian ­customers still preferred perfect white, ­chlorine-bleached paper, Jallouli says with some regret. So alongside his environmentally friendly approach, he continues to work using conventional printing methods. ‘The manager course also taught me to think outside the box and refine my strategy,’ says the entrepreneur. His workforce has doubled since the printing house switched to green production. Today it employs over 30 young people. That has colossal significance for a country with 15 per cent unemployment. In some parts of Tunisia almost one in three young people are unemployed. And many of those affected have left for Europe because they see no prospects at home.

The print shop is alive to the sound of machinery beeping and whirring. ‘We’ve ­retained some experienced colleagues, ­otherwise we appointed young, well-trained staff,’ Jallouli explains. Houssem Forgi is a prime example: he began working at the printing house as an apprentice in 2007. ­Today the 29-year-old is responsible for printing. ‘I’m proud of how everything has developed here,’ he says. ‘We’re much better organised and more efficient than before.’ Nowadays the young man also passes on what he has learned to new colleagues. As Jallouli listens attentively to his printer, he is forced to smile: ‘One of the things I learned in Germany was to delegate responsibility.’ Today the boss ensures his staff are more closely involved in the production process.

Few staff over the age of 20

Herbiotech is also committed to recruiting young staff. Few of those operating the machines are older than 20. Most of the young men and women come from a village near the factory. Herbiotech located to Bouarada because there were tax breaks for companies which voluntarily moved to structurally weak inland regions.

Hamza Dridi is one of three engineers who supervise production. ‘I’m responsible for the entire cycle: from planning what is planted and when, to clearing products for export.’ The man in green overalls is one of Tlemcani’s former students and was part of his team from the outset. Depending on demand, the machines run for 16 to 24 hours each day. They can process up to two tonnes of olive leaves, used in herbal teas, and 700 kilos of aromatic herbs every day. ‘We could double production, but we simply don’t have enough herbs,’ says Dridi.

German customers come to see the herbs in the fields

Although there is no lack of demand, the entrepreneur wishes the Tunisian authorities showed more understanding for his company. ‘We spend 60 per cent of our time dealing with stuff that has nothing to do with us,’ says Tlemcani, as he takes the telephone off the hook in irritation. The customs authority has just refused to accept an invoice because his goods were declared in pounds not kilograms. Herbiotech’s ­requests often fall on deaf ears at the banks. ‘They don’t understand that you have to let land lie fallow from time to time for the soil to recover.’

While many customers come all the way from Germany to visit the company, not one Tunisian bank employee has so far made the two-hour journey from Tunis, Tlemcani explains with a shrug. ‘Our ­customers always tell us they have never seen such rapid development in this
area. That tells us we’re doing something right.’ His priority is now to find a second growing area as quickly as possible, ­preferably in the country’s cooler northern climes. ‘Then we can also grow basil, ­coriander, lemon balm and thyme – it’s too hot for that here.’

Nizar Jallouli also has plans for his printing house: his aim is to double the workforce, build a 700 square-metre ­production hall with solar panels on the roof, and increase turnover from one ­million dinars to five million by 2018. And at the same time he hopes to persuade his Tunisian customers that grey paper can be synonymous with high quality.. 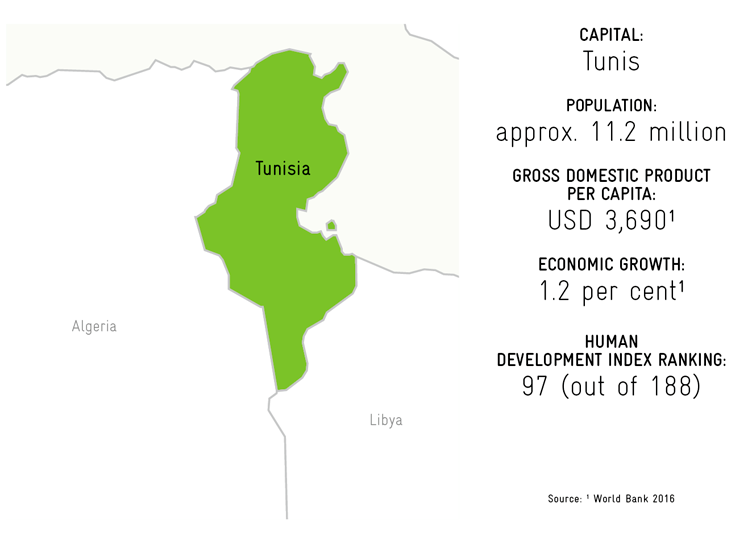 The young democracy in Tunisia is seen as a beacon of hope for the Arab world. Having achieved political transition, the North African country now faces the task of boosting its economy and improving living conditions for its people. The Manager Training Programme is promoted by GIZ on behalf of the German Federal Ministry for Economic Affairs and Energy to enable small and medium-sized enterprises to forge links with German partners and broaden their knowledge of the market sector. Since 2014, 97 Tunisian managers have taken part in the training course in Germany, ­generating lasting contacts. Many enterprises now operate more efficiently, have ­established business partners in Germany and are creating new jobs in Tunisia. Since 1998, more than 11,000 managers from 19 countries have completed the programme. Another 900 join them every year. Thousands of German private ­companies are involved in the programme, most of them medium-sized enterprises.
Mehr auf giz.de:

Fit for Partnership with Germany (BmWi)