Mongolian politicians, inspectors, trade unionists and employer representatives travelled to Germany and Norway to find out how to improve occupational health and safety.

Norway’s rugged landscape is blanketed in snow when the Mongolian delegation arrives. Boris Buyannemekh, a safety inspector who works for the government, sees the snow glistening in the low-lying sun as their plane approaches Oslo. ‘Finally! We’ve all been missing the snow at home,’ he says, after stepping foot on European soil for the first time. He explains that there has been no snow in Mongolia this winter. ‘Finding some here in Europe is a good start to our trip.’

But even as they embark on their first tour of the Norwegian capital, the thrill of being a tourist quickly fades as the nine experts for occupational health and safety cast a critical eye around the city. Buyannemekh and the other members of the delegation are surprised by the ice on the pavements, which have only been strewn with coarse gravel: what happens if someone slips? Who is liable? Doesn’t the state have to spread salt on the pavements to keep pedestrians safe, as is the case in the Mongolian capital of Ulan Bator? Two women jog past the group over the ice – and the spikes on soles of their shoes offer a clue to help solve the mystery. The Norwegian people set great store by decisions negotiated by society as a whole: because it is better for the environment to use less salt, they accept responsibility for their own safety underfoot.

Process of negotiations between employers and employees

The delegation, led by Mongolia’s Deputy Minister for Labour Jamiyandorj Batkhuyag, encounters this basic principle everywhere they go, be it Norway’s largest employer association, the umbrella organisation for trade unions or the national research institute for occupational health and safety. Government, employer and employee representatives form a kind of trinity and base their negotiations on scientifically determined facts. Decisions on occupational health and safety are also made using this process.

For more than 100 years, rights and obligations have also been determined through a process of negotiation between employers and employees – once accepted, all parties abide by these decisions until the next round of negotiations, and Norwegian employees are not permitted to strike. Norwegians believe that this is the key to a productive working environment.

Safety standards based on guidelines of ILO and EU

Norwegian safety standards are based on the guidelines of the International Labour Organization and the EU. However, as explained to the guests, since 1977 the right to a safe working environment has been more firmly embedded in Norwegian employment legislation than anywhere else in Europe. Moreover, the Norwegian system is based on knowledge and information: through a national monitoring body, a research institute, company doctors, safety managers and training courses, efforts are made to continuously raise awareness of the relationship between work, illness and health.

Luvsandanzan Urgamal is especially interested in what the Norwegian employers’ association has to say. Urgamal, an engineer, advises the Mongolian employers’ association on occupational health and safety matters. She is curious to know which occupational safety regulations are negotiable and which are not. Do Norwegian employers readily engage in efforts to raise awareness and improve safety management and, if so, how is this funded? She discovers that the umbrella association is proud of its high safety standards and, as such, provides funding from its own budget. As a result, if Norwegian employees fall ill, they continue to receive 100% of their salary for up to a year. This is generous, but also expensive for employers, which is why they strive during the negotiation process to ensure that the proportion they need to pay is not too high.

If employees fall ill, they continue to receive their salary

Urgamal herself has many years of experience as an occupational health and safety inspector, including in the state inspection authority where Boris Buyannemekh works. ‘I want to convince employers in Mongolia to adopt an approach which benefits society as a whole,’ she says. Instead of issuing official instructions and monitoring their implementation, her job is to persuade people of the advantages. When accidents occur, employer representatives and trade unions in Mongolia usually try to pass the blame back and forth, and it is the victim who ultimately loses out. ‘It is therefore very important for me to find out how other societies legislate their responsibilities, and what arguments and measures they use to ensure everyone remains committed to safety and abides by the rules.’ 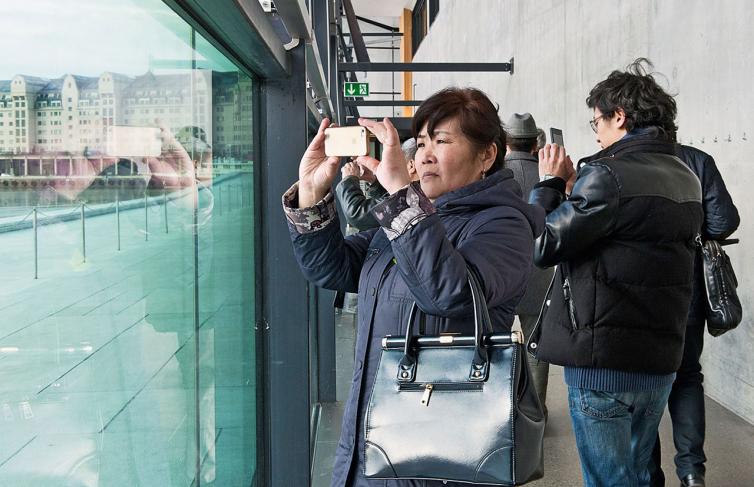 The boom in mining in Mongolia has seen a rise in the number of occupational health and safety problems. As a result of the intensified extraction of raw materials, Mongolia’s construction sector is growing rapidly. More infrastructure is needed, and towns and cities are expanding. Unfortunately, this has also led to an increase in the number of serious accidents, according to Buyannemekh, who is head of the department for labour and social security at the state inspection authority. ‘Last year, more than 50 deaths were recorded as a result of accidents in the various sectors,’ he says. ‘Almost every day, I find myself comforting distraught relatives who have lost loved ones in workplace accidents, such as falling from scaffolding,’ he reports, clearly moved by these unfortunate events. All too often, there is nothing he can do to help since there is no legislation to indicate who is responsible for paying benefits to surviving dependants in the event of fatal accidents. These stories deeply affect the dedicated occupational health and safety expert. ‘The economic upturn is supposed to benefit society. That’s why we have to make sure accidents don’t happen in the first place.’

"Great deal of experience in occupational health and safety"

The trip to Norway and Germany supports this objective. Mongolian occupational health and safety legislation is currently being revised and this process is to be completed by late 2015. Before then, the delegation of politicians, inspectors, trade unionists and employer representatives wants to find out more about the high standards applied elsewhere and to gather new information and arguments to incorporate into the debate back home. ‘The participants are interested in the Norwegian system because the country has already undergone a process of change similar to the one that Mongolia might have ahead of it,’ says Batbold Otgonbayar from GIZ Mongolia, who is accompanying the group. ‘Norway’s thriving economy is based on the extraction of raw materials, and the country has a great deal of experience in occupational health and safety in this sector.’

The delegation’s trip was organised by GIZ on behalf of the German Federal Ministry for Economic Affairs and Energy. Germany has been Mongolia’s key contact on occupational health and safety matters since the two countries entered into a raw materials partnership in 2011. Presenting positive examples is an important part of the advisory services offered by Germany.

Accident insurance companies required by law to contribute to safety

From Oslo, the group therefore continues its journey to Germany’s capital city. This is also Urgamal’s first time in Europe, and Berlin instantly wins her heart. ‘Berlin has a spirit of optimism which reminds me of Ulan Bator,’ she enthuses. Urgamal grew up in a rural province, but has a soft spot for bustling cities. At the German Federal Ministry of Labour and Social Affairs, a representative of the Federal Institute for Occupational Safety and Health explains the special features of the German system: both the state and accident insurance companies are required by law to contribute to occupational health and safety. Buyannemekh approves: ‘This provides a clear political framework for the public and private sectors’ shared interest in protecting the working population.’

Mongolia is one of many countries from which GIZ welcomes guests: every year, more than 300 delegations from all over the world travel to Germany. These visitors, often high-ranking government representatives, exchange ideas with other experts on political, reform and change processes in Germany and Europe to gain impetus for reform in their own countries. These trips also enable them to share their own interests and experiences with others in Germany. The trips can focus on any number of topics, ranging from dual education systems and renewable energy to legal and judicial reform.

To conclude the trip, he and Mongolia’s Deputy Minister for Labour experience for themselves the safety standards they hope to replicate in their own country at the construction site in the heart of Berlin, where the historical City Palace is being restored. There is an extensive array of safety features, which include helmets, safety vests and safety shoes for everyone, an independent on-site safety coordinator with authority over the construction company, clearly visible emergency plans, safe scaffolding and a dedicated container for first aid.

Buyannemekh says that he’ll definitely be telling everyone about Berlin’s impressive construction site when he’s back in Mongolia – and also about the many young Norwegian men he saw pushing buggies along the street. He then intends to study German and Norwegian occupational health and safety regulations more closely and share his new-found knowledge with others at home. Urgamal hopes that the delegates will be able to work together to implement higher safety standards following their trip. The head of the delegation, Batkhuyag, is quick to give this plan the green light on behalf of the Ministry of Labour: ‘This team has now collected a great deal of information first-hand and acquired important skills. The members will remain in touch.’