Hundreds of thousands of ­refugees found refuge in camps in northern Iraq, escaping the war and the terror by the so called "Islamic state" (IS).

Nazrin Iljaz’s world fell apart during the night of 3 August 2014. Troops from the terrorist group Islamic State (IS) invaded the district of Sinjar in northern Iraq, murdered the Yazidi menfolk, abducted the women and children, and committed acts of rape. Those who were able to, fled the area. Iljaz stuck it out, hoping until the last that the terrorists would not get to her. But her hopes were quickly extinguished. The farmer and single mother took her seven children and escaped to the mountains. ‘From up there, I could see my friends and neighbours dying,’ she recalls, almost without emotion. Suddenly there is anger in her eyes: ‘Some of my non-Yazidi neighbours joined up with the IS troops and looted my farm and house.’ Then in a softer voice: ‘They were once my neighbours.’

When Iljaz hurriedly fled her home, all she could take with her was a little food, some gold jewellery and the clothes she and her children were wearing. After several days’ walking through the mountains, the family came across Kurdish Peshmerga fighters, who escorted them – along with hundreds of thousands of other refugees – to the Iraqi border. Here, volunteers from the province of Dohuk came to meet the exhausted refugees with their own cars, buses, taxis and trucks.

Collaboration with Deutsche Welthungerhilfe and UNICEF

Iljaz and her children found shelter in a school for the first few weeks. The Kurdish Government and local population provided food, clothing, bedding and toys. Since late September 2014, the family of eight has been living in the Shariya refugee camp, where they occupy two tents. 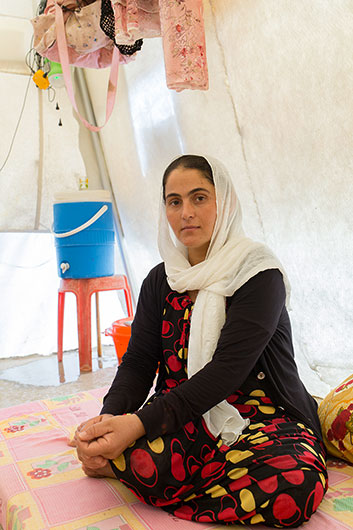 Nazrin Iljaz and her seven children live in the Shariya refugee camp in Dohuk in northern Iraq. They are well provided for and even receive support to ensure their psychological wellbeing.

Shariya is one of eleven refugee camps in ­Dohuk, where GIZ assists the provincial government in its efforts to alleviate the plight of people like Nazrin Iljaz. On behalf of the German Federal Ministry for Economic Cooperation and Development and in collaboration with Deutsche Welthungerhilfe e.V. and UNICEF, GIZ is building 14 community centres, 10 schools, seven health centres and a hospital.

In addition, approximately 4,000 concrete baseplates for refugee tents have been put in place, roads have been built, and systems for water supply and wastewater disposal created. GIZ organises training courses to prepare administrators of the refugee camps for their duties and provides instruction in conflict resolution.

Around 20,000 people live in the Shariya refugee camp. In the twelve months from summer 2014, approximately 550,000 refugees arrived in Dohuk Province, most of them from Syria and Iraq. To provide refugees with some form of activity and something to take their mind off their plight, UNICEF organises football tournaments and readings on behalf of GIZ.

Hundreds of the children take part in theatre groups, and each camp has its own newspaper run by youngsters. Three mobile cinemas tour the camps. Iljaz feels safe and well in Shariya. ‘When we arrived, our tent was already provided with water and electricity. Waste is collected every day and if something doesn’t work, the authorities come immediately to fix it.’

With a roof over their heads, water, food, clothing and even a little entertainment, the family is provided with the basics. But they cannot forget the horrors they have witnessed. Iljaz suffers from panic attacks, problems sleeping and anxiety. Her children wake up in the night screaming. The mother seeks help from the social worker Khoshi Zubeir, whose office is in the camp’s community centre. Zubeir listens patiently to Iljaz and persuades her to take advantage of the many activities offered by the community centre. ‘It is important for the women and children to keep themselves occupied, to give their day structure and get back to some kind of routine.’ A daily routine for the time being.

Involved in developing the camp's infrastructure

For Iljaz, who never went to school and led an isolated life in the mountains, something like a new world is gradually taking shape: ‘I participate in group activities and enjoy taking advantage of all the things on offer. I can now plan my life independently.’ She attends literacy classes, a sewing course and information events. Other refugees are involved in developing the camp’s infrastructure and receive a wage for their efforts. There is even a lawyer on hand for visitors to the community centre. She is able to assist with obtaining new passports and marriage or birth certificates – important documents often left behind in the hurry to get away.

Is there hope of return? According to official sources, 38,000 Yazidis have returned home since the city of Sinjar was liberated from the terror organisation IS in November 2015. But mines are everywhere and the region has been devastated. For Nazrin Iljaz and her children, who knows what the future holds. Nevertheless, they are looking forward with renewed optimism.

Northern Iraq: A life after displacement
Migration and development