One in four Egyptians under the age of 24 is without a job. Now a German-Egyptian employment pact has restored hope to find work.

Four arms held aloft, a different tool in each hand – electric drill, hammer, folding rule and pliers. The poster virtually covers the entire wall behind the reception desk. Its message is clear: here, at the offices of the National Employment Pact (NEP), we are committed to getting people into work.

It is 10 am. The reception area at the employment centre is full of young Egyptians looking for work. Ibrahim Sabri has come here for the first time. The 28-year-old has just got married and is about to become a father. He runs a small tailor’s shop, but the takings are not enough to live on. NEP is designed to help people like him. For university graduates there are private employment agencies and internet portals, but ordinary workers only find jobs if they hear of one by chance or by going from company to company. There is no state-run employment agency. 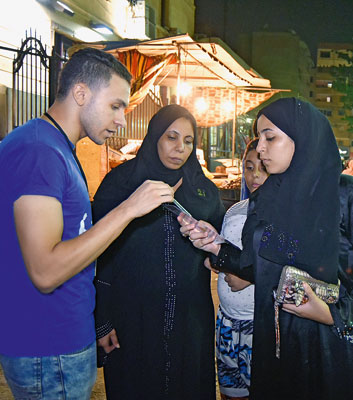 The employment centre is on the seventh floor of an office building in Dokki District. It is one of three such centres in Greater Cairo. After Egypt’s 2011 revolution, business representatives put their heads together to determine what the country urgently needed during the redevelopment phase. The answer, they decided, was jobs. And so NEP was born. Its management committee is made up of representatives from 12 German and Egyptian companies, including Siemens, BASF and Hassan Allam Holding. GIZ has been supporting NEP since 2011 on behalf of the German Federal Ministry for Economic Cooperation and Development (BMZ) and the German Federal Foreign Office. Since 2015, the project has been part of the special initiative launched by BMZ to promote stability and development in the Middle East and North Africa (MENA). GIZ develops training courses for applicants as well as for qualified employment officers. So far 55 Egyptians have received training and are now working as employment officers in the centres.

The official unemployment rate in Egypt is around 13 per cent. However, half of all those employed work in the shadow economy, with neither social nor health insurance and no employment rights. The situation is particularly difficult for young people. For this reason, NEP specifically targets applicants under the age of 35, for whom it aims to find decent jobs with social protection.

Through its special initiative to promote stability and development in the MENA region, the German Federal Ministry for Economic Cooperation and Development (BMZ) is creating opportunities for people in North Africa and the Middle East. The initiative therefore also contributes to maintaining peace. Since 2014, BMZ has provided more than EUR 200 million for projects focusing on youth employment, economic stabilisation and democratisation.

Ibrahim Sabri is part of this target group. His dream is to work as a driver. At the employment centre he answers questions about his skills, interests and ambitions. He is told he must complete a two-day preparatory training course designed to get applicants ready for the labour market. Behind the glass wall of the seminar room, one of the training courses has just got underway, featuring a music video by popular rapper Ahmed Mekky. ‘Don’t be anybody but yourself,’ it says. ‘Believe in yourself!’

The 24 participants learn about their rights and obligations as employees. They are taught how to conduct themselves at job interviews and, in particular, what companies will expect from them. One of the participants is Fatma Maged. ‘I had heard a lot about the employment centre,’ the 22-year-old says. ‘I met people who were really enthusiastic about it.’ What she likes in particular about the training course is that the speakers inspire greater self-confidence and determination in participants.

Proof that this really does make applicants more attractive to employers is to be found just 12 kilometres away, as the crow flies, at Samaya Electronics Egypt in the Cairo district of Nasr City. Human resources coordinator Basma Abbas explains why she is so happy to take applicants sent to her by NEP. ‘When I started here a year ago, my boss told me straight away to work with NEP,’ the resolute young woman recalls. She is responsible for recruiting production staff. ‘Workers from NEP are more committed and more productive.’

The company produces radios, central locking systems and other electronic components for car manufacturers, including Mitsubishi, Alfa Romeo and Renault. It employs over 500 people, but is currently taking on around 50 more every month. The demand for new workers is constantly growing. Around one third of new recruits have come via NEP in the past year.

The production halls appear neat and tidy. The building is being cleaned from top to bottom, the smell of disinfectant is everywhere. The employees wear colour-coded polo shirts – team leaders wear red, quality controllers green. Clearly little is left to chance at Samaya.

It is easy to see why Basma Abbas enjoys working with NEP, because the employment agency preselects potential candidates. That not only increases the applicants’ chances, but also benefits the companies. With a degree in psychology, the human resources coordinator is able to interview jobseekers and judge how serious they are about their application. One in three of all new workers quit soon after taking up employment, for example because the job is too far from home.

Basma Abbas explains that her company offers social security and good prospects. ‘The mindset of production workers is different to that of graduates from a technical college or university. They have no career plans, even though we aim to provide them with opportunities.’ To workers who want to quit before finding a new job, she says: ‘Why sit around at home? At least apply for a new job while you’re still in full-time employment.’

He learned about the NEP at a job fair

It is 8 am and Mahmoud Sobhy has just finished the nightshift. Outside on the street, company buses are dropping workers off at regular intervals at Nasr City Free Zone, which is home to several other companies in addition to Samaya. Sobhy wears a blue polo shirt like the other production assistants. The 22-year-old has been working here since September 2014. Before that he had worked at a printer’s, a dairy and in a clothing store. He learned about the job placement scheme at a job fair in his district organised by NEP. 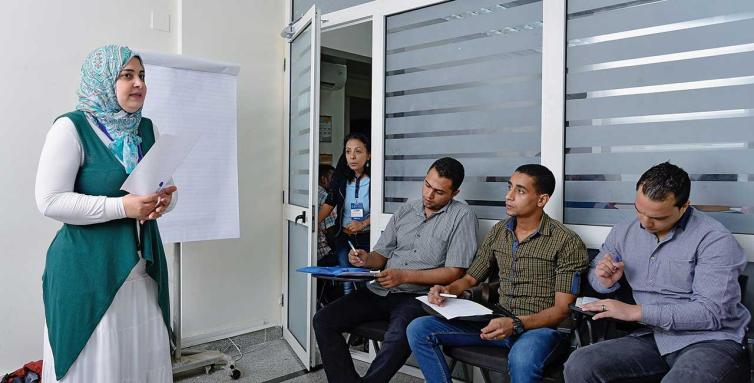 In Warraq District, where Sobhy lives, there are many unemployed young people. They sit at home or in the cafes, with no idea how they will find a job. These are exactly the type of people the German-Egyptian Employment Pact hopes to reach. It distributes information flyers, organises fairs and encourages jobseekers to visit one of its employment centres – just as Mahmoud Sobhy did. He was particularly impressed with the preparatory training: ‘They treated us with respect. Even before the first day was over, I was already looking forward to day two.’

No health insurance, but contract doctors

After that things moved fast. The employment centre organised an interview for him with Samaya, he was appointed to the post and since then has been checking products at the end of an assembly line. He enjoys being part of a properly functioning system. ‘I feel I’m doing something important, because I’m making devices for well-known car brands.’

Mahmoud Sobhy now enjoys social security and 21 days of paid holiday per year. He gets free food in the canteen, pays nothing to use the company bus, and also receives overtime pay. There is no health insurance, but if employees fall sick they are treated by contract doctors in contract clinics at the company’s expense. The only problem for Sobhy is the long journey to work. It takes him two hours to travel the 30 kilometres from Warraq to the factory gates in Nasr
City – before he can board the company bus, he first has to make his way to the main railway station. 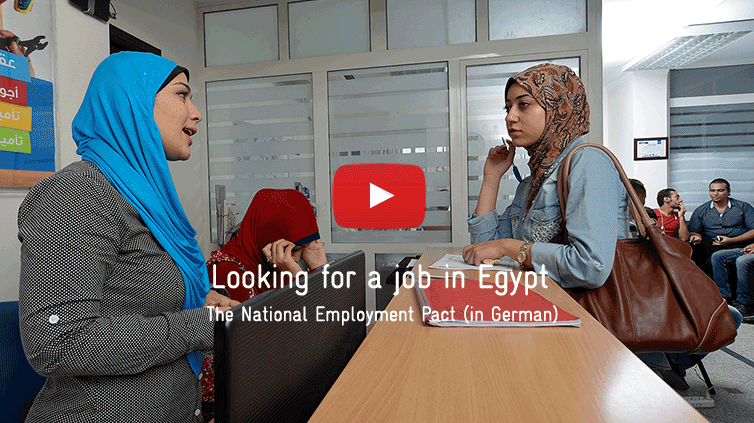 So Sobhy is considering looking for a new job. And a chance, perhaps, to earn more money. Samaya pays employees a monthly salary equivalent to around 120 euros, a competitive market wage. ‘Of course I would take a better job if I found one.’ He’s not yet sure when he will start his search. But he is certain of one thing: he will definitely be going back to one of the employment centres run by NEP. 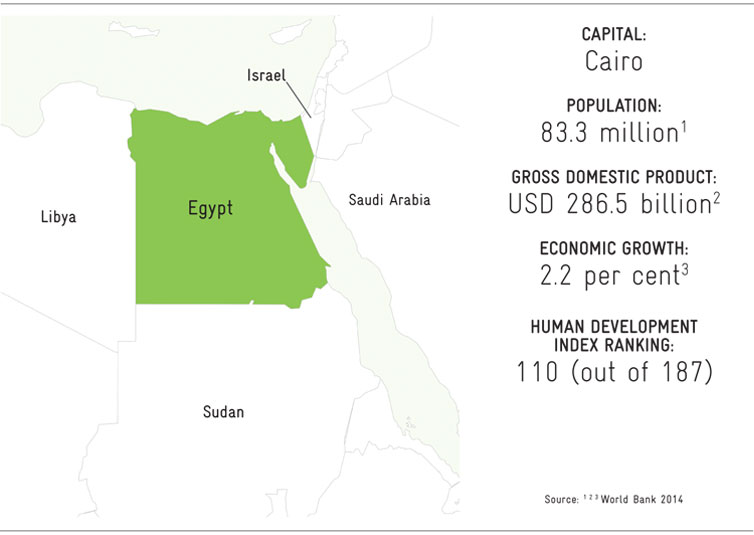 Unemployment in Egypt is high, particularly among young people. At the same time, many companies struggle to find suitable employees. GIZ supports the National Employment Pact (NEP) in developing better preparatory and job placement services. It also advises the Umbrella Association for Economic Development on improving the quality of jobs in the manufacturing sector. GIZ has been supporting the project since 2011 on behalf of the German Federal Ministry for Economic Cooperation and Development and the German Federal Foreign Office. Since then, the project’s partners have found employment for more than 4,000 Egyptian men and women. And the number is rising by 130 each month. Around 500 companies currently use NEP’s services.
More on giz.de