My friend, the tree

How livestock ranchers in Colombia are protecting the rain forest and improving their incomes at the same time.

The 'R. Rausch Restaurant' is a high-end eatery in Colombia's capital city of Bogotá. Located on the fourth floor of the 'Centro Andino' shopping mall, it serves meals for eco-friendly hipsters, like its 'anti-deforestación' pizza, for example. This meal with a save-the-rainforest message takes a stand against deforestation. Anyone wanting to find out what is behind all this will have to travel more than 500 km to the city of Florencia, the gateway to the Colombian Amazon located deep in the south of this Latin American country. 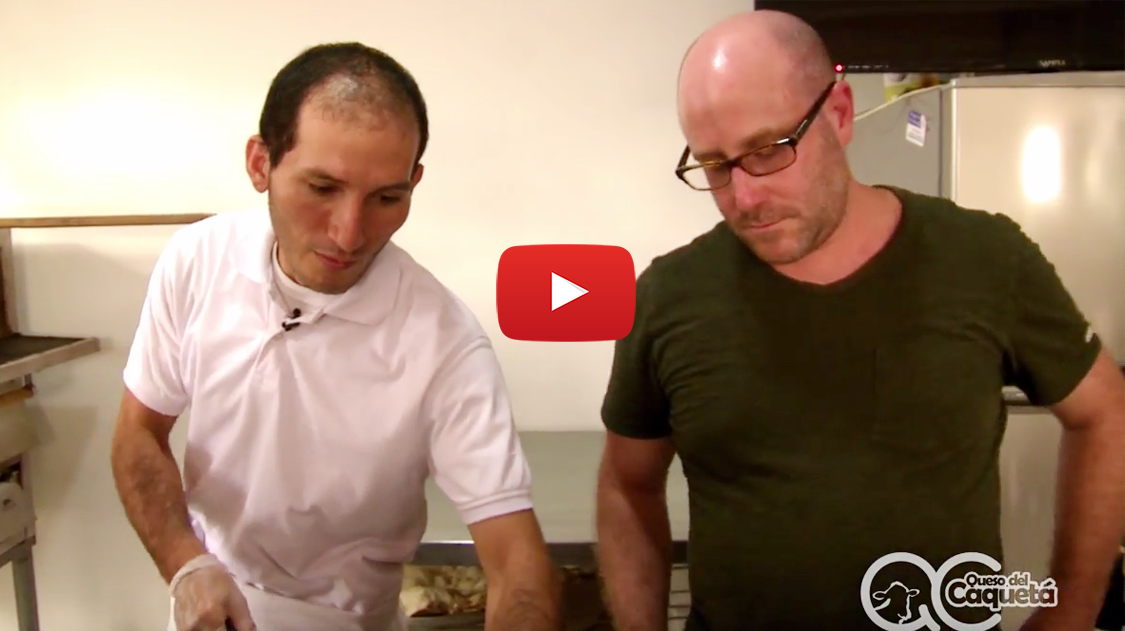 Video: the route of the cheese

Here in Caquetá Province lies Chiribiquete National Park. Founded in 1989 and spanning more than 2.8 million hectares, it is one of the largest national parks in the world. However, the surrounding areas have been more heavily impacted by deforestation than any other region in Colombia. Driving this ruthless exploitation is the region's most important economic sector: cattle ranching, which wipes out the forest in a bid to increase grazing areas. However, an initiative by the Deutsche Gesellschaft für Internationale Zusammenarbeit (GIZ) GmbH in cooperation with Colombia's Environment Ministry is showing how to put a stop to this practice. Commissioned by Germany's Federal Environment Ministry (BMUB), experts are assisting Colombian cattle ranchers to make do with smaller grazing areas yet still produce more milk.

A finca caught between two sides

Goodwill, ideas and expertise have achieved a great deal in the Caquetá region since 2014.  And rancher Antonio Ricardo's finca is proof. Cow Clara lies on a meadow in the shade of a guava tree. When she is thirsty – which she frequently is due to the heat here – she only has to walk a few steps to the drinking trough with its fresh water supplied by a remote pumping unit. When it is time for milking, Clara takes a cordoned-off pathway into the cowshed where her mash awaits her. 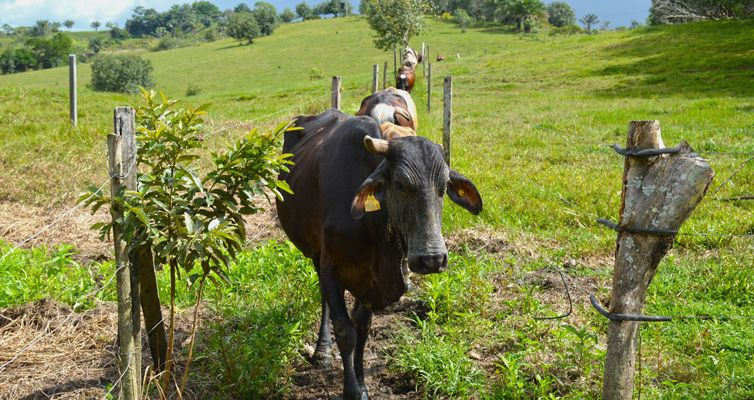 The cows on their way to the milking section

When Ricardo bought the 77-hectare property close to the village of Morelia three years ago, things looked very different. There were virtually no trees and everything was quite run down, as the guerrilla had extorted protection money from the previous owner. Later, paramilitary death squads occupied the place. Its location on a major road artery served them well as a control post. The region only slowly started to regain normalcy in 2012 when the guerrilla organisation FARC started negotiating peace with the government.

Full of enthusiasm, Ricardo threw himself into growing his milk business. 'My parents used to keep cattle, but I realised that the old methods were not working properly any more,' he says. In spite of having so much space to roam, his cows were producing less and less milk and were getting pregnant more infrequently. But then rancher Ricardo heard about the project. 'With the right methods, it is possible to improve productivity in dairy farming and lower the use of land,' says the responsible environment expert Verenice Sánchez. Protecting natural resources is of vital importance in Colombia. This South American state is one of the world’s five most biodiverse countries. And the Amazon region's natural resources have tremendous importance for the global climate. 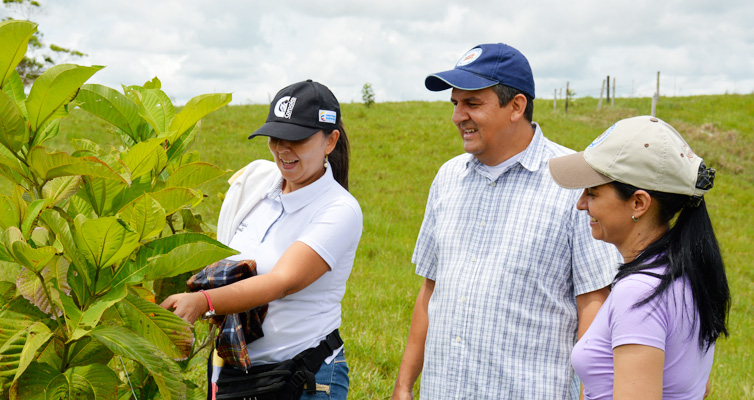 Antonio and Diana Ricardo are looking at a newly planted chilco tree. They are accompanied by Verenice Sánchez (GIZ).

Antonio Ricardo decided to take the plunge. 'If I divide my finca into ten smaller grazing plots, provide shade and water on each one and move the animals to a different plot every twelve hours, they feel better, produce more milk and are more fertile,' says the 47-year-old. 'And that is despite the fact that I’ve actually made their total grazing area some eight hectares smaller.' However, the land is now being used more efficiently and constant rotation reduces soil erosion. On the areas that are not being used, the rancher leaves nature to itself. And after just three years, the tropical climate has produced an impressive little forest. Ricardo has documented everything neatly in a notebook. His cows now produce 20 per cent more milk. Their fertility rate has increased by 30 per cent. And together with his wife Diana, he has planted 500 small trees in a way that will secure shade in future for two or even three grazing plots at the same time.

Environmental expert Sánchez helped Ricardo change his farming technique. GIZ financed the finca's conversion, i.e. the posts, water pipes, a substantial amount of wire, feed containers and small trees. And the Ricardo family put in the hard labour. 'It has not only been worthwhile from an economic standpoint,' says 37-year-old Diana. 'Our children are growing up with a completely different mentality watching us tend and care for the trees. In the old days, we cattle ranchers regarded trees as an obstacle and cut them down. Now they are our allies.' In return for support, the ranchers set aside a couple of hectares of their land for reforestation or leave them to regenerate naturally. 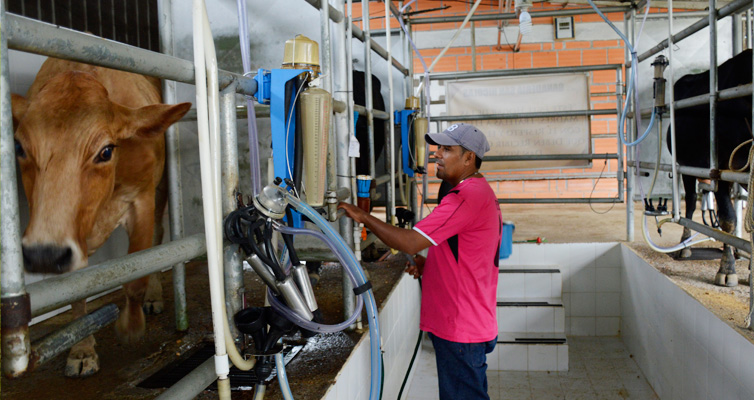 The eight model fincas alone have provided some 310 hectares of land for reforestation. That is more than 14 per cent of their farmland. Now land the size of more than 430 football pitches that was formerly used for intensive cattle ranching is regreening. In the medium-term, these areas will form a forest corridor in the buffer zone around the adjacent natural reserves of Chiribiquete and Fragua.

Nature recovers astoundingly quickly. In cooperation with Uniamazonía, the state University of the Amazon, GIZ measured biodiversity prior to the project's launch in early 2014 and following its completion in summer 2017. 'Initially, we had 65 different bird species here, now we have 87,' says Sánchez. And rancher Ricardo reports that he sometimes catches a glimpse of some rare species of armadillo.

Three times as much land in the past

GIZ provided direct support to eight fincas. But others are now taking up this new method of cattle ranching: A total of 125 ranchers in Caquetá region adapted their enterprises to this model in 2017, resulting in the project and the regional cattle ranching federation Fedegan being presented with a national environmental award for their alternative methods.

But it is not just the contribution to nature conservation that is compelling, but also the method's cost-effectiveness. The ranchers have increased their income by more than 75 per cent. At the same time, improved livestock management means much smaller areas are needed. On average, there are now three cows to every two hectares of land. Before, the animals needed three times as much land. 'It might take a while for the word of this success to spread, but interest hasn't waned,' says Rafael Torrijos, who chairs the cattle ranching federation and its 15,000 members. He is proud that Caquetá was chosen for an international study into eco-friendly cattle ranching. The surveys by biologist Lesley Mitchell corroborate the success of this conversion.

Local processing instead of mass production

This is encouraging. 'If each of us dedicates ten per cent of our grazing areas to nature protection, we are not only more efficient but are doing something for climate change mitigation and biodiversity,' says chairman Torrijos. ‘In the past, we livestock ranchers were the main cause of deforestation, but things are changing.' However, the problem has not gone away. Peace has unleashed a growing pressure to build settlements on land formerly controlled by the guerrillas and paramilitary forces. And gold prospectors and coca growers are another threat to the region's environment.

'But in contrast to these illegal activities, cattle ranching has a future,' says Rafael Torrijos. He adds that ranchers need to rethink their tactics and stop mass producing and selling their milk to wholesalers only. Torrijos advocates local processing and high-quality produce, like the soft cream cheese from Caquetá, which also adorns the 'anti-deforestation' pizza served by star cook Rausch in Bogotá. Rausch has even made a video about the 'queso de Caquetà' and its journey from the meadow to his restaurant. Long threads of it sit atop the 'pizza anti-deforestación’ – giving it a delicious taste.