After more than 50 years of civil war, Colombia has more internally displaced persons (IDPs) than any other country in the world. Parliament recently adopted a peace agreement with the FARC, but this now has to be given substance. Reconciliation projects like the one in the city of Florencia paint a picture of a brighter future.

The distant summits of the Andes are shrouded in mist. The dirt track that runs in front of the brightly painted houses in La Ilusión, a neighbourhood in the Colombian departmental capital Florencia, has been turned into a quagmire by the incessant rain.

María Leíver Urrego and her neighbours are unfazed. The 30 women, men and children have put up their umbrellas and are standing in a circle. Aromatic steam is rising from the three large pots in front of them and mingling with the raindrops. Earlier today, they all helped to peel potatoes and pluck chickens. Now it is lunchtime, and one after the other they offer words of gratitude. ‘Together we are strong,’ says Urrego, when it is her turn to speak. Then they share out the stew.

The 400 inhabitants of La Ilusión are putting into practice something which in many places remains a remote prospect in this South American country torn apart by violence. Former fighters and those they drove out of the village now live side by side. ‘We look after one another,’ says Urrego with conviction.

This is thanks in part to the Fundación para la Reconciliación (‘Foundation for Reconciliation’), which has a centre just a few streets away. GIZ has been supporting the work of the centre since 2015 on behalf of the German Federal Ministry for Economic Cooperation and Development. During the centre’s two-week training courses, Urrego and her neighbours – both victims and perpetrators – would sit together in a room, talking and getting to know and understand one another better. Social workers were on hand to support the difficult process of rapprochement between the two sides. ‘I haven’t forgotten, but I have forgiven,’ says 54-year-old Urrego reflectively.

There are more IDPs living in Colombia than in any country in the world – more than in Syria and its neighbouring countries. It is the sad legacy of a conflict that has continued for over 50 years between the government, the left-wing rebel ‘guerrillas’ and the right-wing paramilitary. Members of the guerrilla movement were originally fighting for social justice in this South American country, where the ­divide between rich and poor is deeper than almost anywhere else on the continent. But many guerrilla fighters themselves became perpetrators of violence. Official sources put at over eight million the number of victims of violence and displacement, including more than 200,000 dead and thousands disappeared. But the largest group is formed of 6.8 million IDPs.

The day she was forced to flee

rrego radiates kindness, with not a hint of bitterness. She comes from a village four hours’ drive south of Florencia. There, where the eastern end of the Andes chain turns to fertile savannah, her family used to lease a small farm. Her eldest son was in the armed forces, the second son a policeman. They earned a living from their 120 hens and modest pig farm. Then, one sunny day in August 2010, their rural idyll was shattered by rebels from the largest guerrilla group, heavily armed members of the Revolutionary Armed Forces of Colombia, or FARC for short.

‘They accused my sons of being informants and wanted to take them away,’ Urrego explains. Her voice cracks for a few seconds. She wipes the tears from her face. That same night, the family set off on a forced march, with two young infants in their arms. A friendly truck driver took them to the cap­ital Bogotá, where they lived for six months – seven people, three generations, all in the same room. Eventually they could stand it no longer and moved to Florencia, where they initially received support from relatives.

Florencia is the capital of the department of Caquetá, historically a FARC stronghold. Fighting was particularly intense here. Three out of four of the population live in Florencia for one reason only: they sought refuge in the big city, where anonymity and the number of neighbours offers greater security.

Colombia’s future remains uncertain. In August 2016, the government and the FARC guerrillas reached a historic peace settlement. But in early October the population rejected the peace agreement in a referendum. Opponents of the agreement criticised the fact that its treatment of the rebels was too lenient. The FARC was to have become a political organisation, for example, with seats in parliament reserved in the years ahead. The agreement was revised and finally passed by parliament in late November.

The government of Juan Manuel Santos still faces enormous challenges, however. In 2011 he initiated a Victims’ Law, which was widely celebrated as the dawn of a new era. But it has only partially fulfilled expectations. Progress with compensation and reintegration for those affected by the conflict has been slow. Many are not even aware that they have a right to compensation or are deterred by the bureaucracy. Nevertheless, there is clear hope that after five decades, the war ­between the government and the rebels will finally be over. This fact was honoured by the Nobel Committee, which in December awarded Santos the Nobel Peace Prize in Oslo for his services.

From powerlessness to self-determination

But now what has been decided at the political level must be accepted by society as a whole. For this reason, GIZ is providing support to state and non-state institutions in Florencia with coordinating more closely their work on behalf of victims, explains Hermán Bernal. He and his colleagues brought to the same table representatives of the victims, the city administration, victims’ agencies, non-governmental organisations and international partners such as the United Nations Refugee Agency and the International Organization for Migration. ‘This enables us to reach out better to those who need our help,’ Bernal says.

What does this mean in practical terms for the population of La Ilusión? Most of them are IDPs without a regular job and with no entitlement to the land on which their modest houses are built. The mayor’s office provides support with legal regulation of the rights to land ownership and offers microloans as start-up aid for self-employment ­activities. The Government Ombudsman ­records the testimonies of victims of the conflict – that is a prerequisite for them receiving compensation. ‘The various relief measures are now coming as one,’ explains María Leíver Urrego.

The entrance to her house is made of heavy wooden panels. The neighbour’s wall to the right replaces her own. A curtain partitions off a small bedroom. The floor is not ­cemented. ‘When it rains, like today, the water comes in,’ says Urrego. But she is content.

Urrego was elected spokesperson at the round table for victims in Florencia in 2015. Every day she meets with people like herself, who have been uprooted by the conflict. She explains their rights to them and works with the city administration and other partners to find ways for them to get a job. 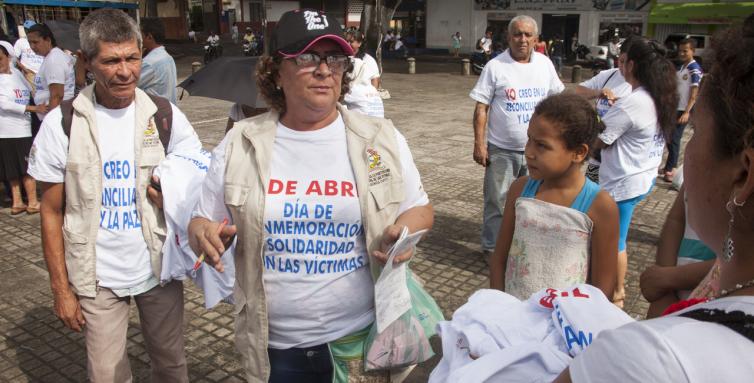 Urrego has an appointment in the settlement of La Granja, a few kilometres outside Florencia. ‘I pay regular visits to the project participants to check that everything is running smoothly,’ she says. The smallholding run by Gloria Vargas Grafe and Arnulfo Sanabria is clean and tidy. The lawn has been mown shorter than in a German allotment. The wooden walls are decked with photos of the children. Grafe and Sanabria were driven out of their home 12 years ago by FARC guerrillas. At the time they kept chickens on their farm and grew manioc and plantains.

Grafe, a shy woman in her early fifties, mostly keeps a low profile behind her husband. But the chicken coop behind the house is her domain. She keeps around 40 cackling hens. Grafe picks up an egg. ‘That’s the fourteenth today.’ In December 2015, GIZ gave her around 20 chickens and materials with which to build the coop; at the same time, it provided the couple with advice on keeping hens. Grafe is now able to sell her eggs to neighbours.

Full-time job: standing up for the rights of IDPs

A similar start-up grant enabled 16 other farmers from the settlement to develop small hen or fish farms. And even more families followed in 2016, selected by Urrego’s round table. ‘There can be no peace on an empty stomach,’ she says.

Urrego’s diary is absolutely full. Today she is expected at a gathering at San Francisco Square in the centre of Florencia. The occasion is the National Day of Remembrance and Solidarity with Victims of Armed Conflict. Everyone is there – her neighbours from La Ilusión, the city’s employees. Urrego is nervous, she has to deliver a speech. She goes over the keywords jotted down on her slip of paper one last time.

Then she gets up onto the stage and speaks. The people applaud. Twelve months ago she was just a simple woman from the countryside; now she is a lobbyist for people who have lost their homes. ‘I get my strength from helping others,’ says Urrego.

And she needs strength, for her voluntary work amounts to a full-time job. She gets up at four o’clock in the morning. Rarely does she go to bed before midnight. In the evenings she sits at her sewing machine and makes clothes to order. It is her only income. ‘Even my granddaughters say to me: “Grandma, you should make more time for yourself.”’ But for Urrego there is little opportunity to relax. She wants to earn her school leaving certificate and then study law, so she will be even better at defending the rights of IDPs. 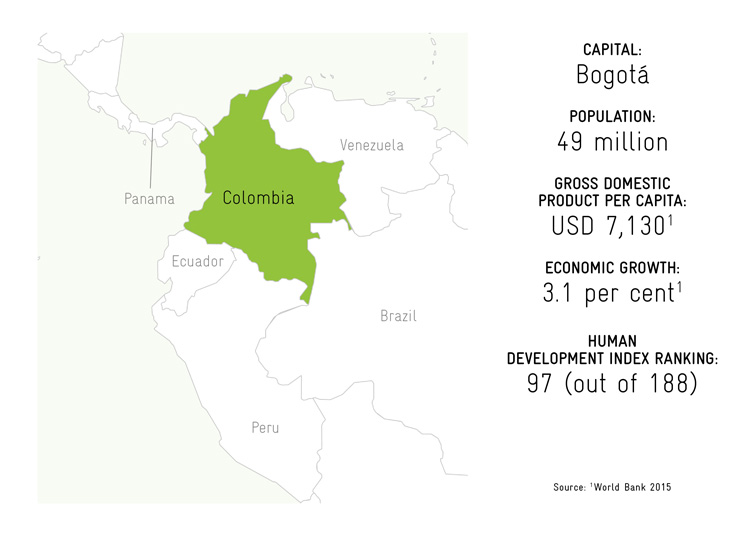 Internally displaced persons (IDPs) in Colombia have the right to state support if they are registered as victims. But even many of those included in the IDP registry – 200,000 people in the Department of Caquetá – are not aware of the benefits on offer. GIZ is ­providing support to state and non-state agencies in Caquetá to ­improve coordination of the registration process as well as support and information services for victims. A central victim support service point has been set up in the capital Florencia. ­Cooperatives and farmers’ organisations also receive support from the service point with their applications for government funding. In addition, those affected can gain access to vocational training and learn how to facilitate contact with employers. More than 3,500 people, predominantly women, have increased their income.
Mehr auf giz.de

GIZ in Colombia
Interview with an indigenous leader