‘Mitigate the impact of the coronavirus pandemic’

Economist Siegfried Leffler has been Director of the GIZ Representation in Brussels since 2016. He manages GIZ’s cooperation activities with the institutions of the EU, primarily with the European Commission.

Germany took up the EU presidency on 1 July. Africa, sustainability and digitalisation were the topics originally on the development policy agenda. Will the coronavirus pandemic now dominate matters instead?
COVID-19 is sure to play a big role, as it’s clear that the pandemic is anything but over. The other topics are still on the agenda, however – digitalisation, climate change and sustainable jobs. The forecasts so far indicate that the economic impact of the coronavirus crisis will hit Africa particularly hard, and this will need to be mitigated. Sustainability remains relevant, climate change will not go away. And digitalisation has actually become more important as a result of COVID-19. We are all experiencing that in our work. Expectations were high regarding the German Presidency of the Council of the EU to start with, and are now more so than ever.

Is the Green Deal – the European Commission’s large-scale sustainability agenda dedicated to making the EU climate-neutral by 2050 – inward-looking only, or will it also influence international cooperation?
The Green Deal is intended to have an effect outside the EU too: directly on the EU’s foreign trade, and indirectly via development cooperation. In Africa, for example, there will be great emphasis in future on generating a green, digital upswing and significantly increasing and accelerating the use of renewable energy, which offer particularly great potential in Africa. This is also in line with GIZ’s strategic approach.

A new EU strategy on Africa is anticipated later this year. Why?
The existing strategy is from 2007 and out of date. The EU is also feeling the competition from other actors and therefore considers it essential to recalibrate its strategy and offer Africa attractive, partnership-based proposals that are of lasting benefit to both sides. As I just mentioned, this will mean an upswing for the continent that is both digital and green. Ursula von der Leyen, President of the Commission, has said that the EU wishes to raise its partnership with Africa to a new geostrategic level.

Sustainability and digitalisation – are there any other priorities in the strategy?
Security will play a major role. Development depends on security – to put it simply and starkly. For that reason, the EU wants to increase its support for peace work and attaches great importance to good governance, democracy and human rights. The EU also intends to help combat the causes of displacement and promote economic growth and employment in Africa. From the start of next year, the world’s largest free trade zone will come into being in Africa, opening up completely new economic prospects – for European businesses, too. The EU is providing considerable support for this process, as is the German Government.

You mentioned the German Government. How does all this fit in with Germany’s policies on Africa?
It is a good match with Germany’s development policy focus, as the German Government has also declared African countries and organisations to be some of its most important partners and has set similar priorities in its Marshall Plan with Africa and the Compact for Africa.

International cooperation requires financial resources. Negotiations are currently under way on what is known as the multiannual financial framework. Could the coronavirus crisis mean that there is a risk of cuts?
Negotiations are in progress and, as always, are extremely complex, particularly because the reconstruction fund to alleviate the impact of the coronavirus pandemic is being negotiated parallel to and as a component of the future multiannual financial framework. However, I don’t believe that fewer resources will ultimately be available for international cooperation. My impression is that the prevailing conviction, not only in the Council but also in the Commission and the Parliament, is that the EU stands for a rights-based international order and wants to step up and take responsibility in the world for maintaining, or establishing, this order. It’s impossible, though, to predict what the final outcome of the budget negotiations will be.

What is GIZ’s role in Brussels?
We are an implementing organisation of the largest European member state. That in itself gives us a certain weight. Our aim is to bring German and European interests together in a positive way and achieve more robust results for our partners and target groups through joint measures. On the one hand, we do this by feeding German positions on development policy into the debate and creating synergies with EU development policy. On the other hand, we offer our own technical expertise, which is founded on decades of practical experience in projects and programmes all over the world – for example, on issues such as working in fragile states, integrating the private sector and determining how development cooperation can contribute more effectively to stabilising societies and states. 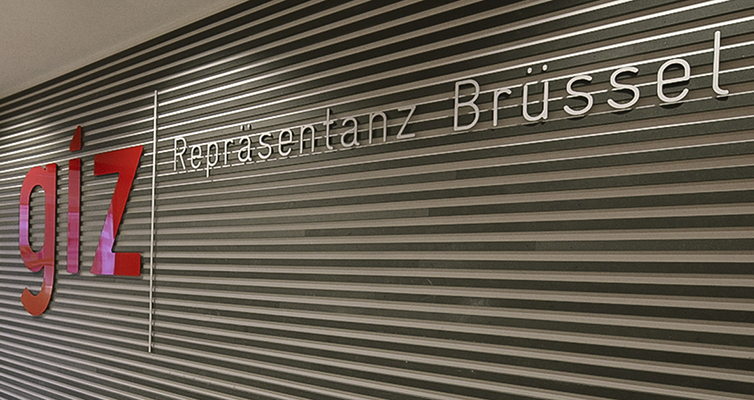 How would you describe cooperation between GIZ and the EU?
GIZ’s business volume with the EU has increased steadily in recent years and has more than doubled to EUR 375 million since 2015. We see this as an expression of the EU’s trust in the effectiveness and quality of our work.

Where does GIZ stand in relation to other development actors vis-à-vis the EU?
We are one of the largest in terms of turnover, but we also engage in dialogue on technical and specialist issues with the Commission and other European implementation agencies, and therefore play a part in shaping European development policy. If anything, cooperation is likely to intensify in the coming years, as the challenges around the world are growing rather than shrinking. During the German Presidency of the Council of the EU we shall be supporting the German Government in working through its agenda and achieving its goals, and this is a good opportunity for us to intensify our connections and position ourselves as competent advisors.