Support for women in Africa

Many women in the West African country of Mali start their own business. They are encouraged by a programme supporting femals founders of SME.

Clack-clack-clack – the little wooden shuttle flies back and forth to the rhythmic clatter of the loom. ‘Coordination is the most difficult part,’ says Colette Traoré. As she steps on a pedal with her right foot, the taut warp threads separate to create a gap. Her right hand pulls a cord and the shuttle shoots through. A spool pays out the thread, Traoré pulls it tight with her left arm. She is 42 years old and has spent half her life as a weaver.

In Ségou, northeast of the capital Ba-mako, she now has her own business. Her 10 employees call her ‘Tanti’. This afternoon Traoré has put on her best clothes. Her elaborately embroidered blue robe and the gold around her neck contrast starkly with the grey walls. There is pride in her appearance – pride born of success. ‘I’m the boss here,’ she says.

[caption caption="Entrepreneur Colette Traoré from Mali pulls all the strings in her weaving business."] 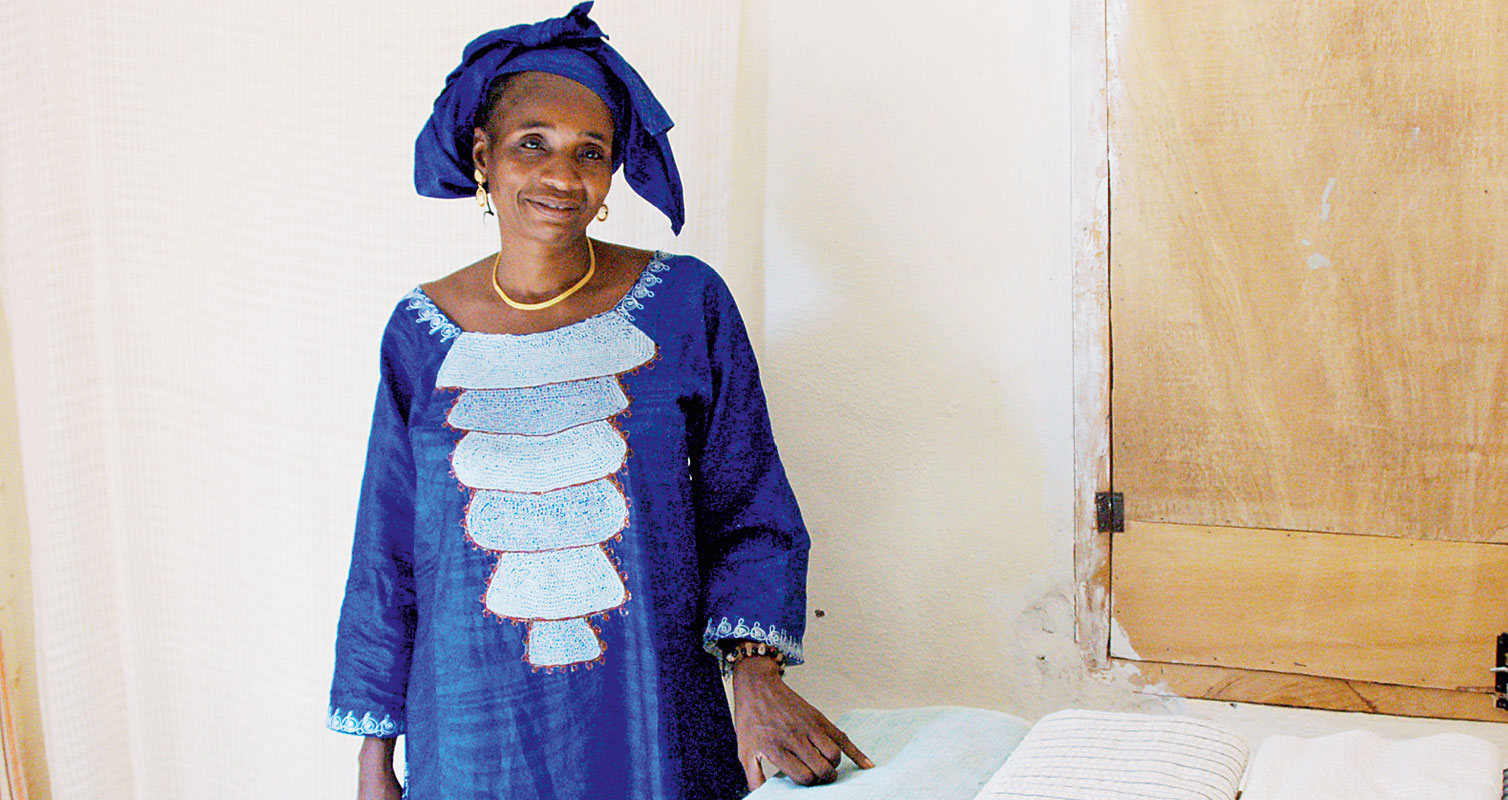 In Mali, 66 per cent of the population live in poverty, and women are particularly vulnerable. They are prepared for their role as housewives from a young age. Instead of going to school, girls are often required to help out at home. 69 per cent of women aged between 15 and 24 are unable to read or write. Entrepreneurs like Colette Traoré are an exception. That is why her story is one of triumph over a society in which men have the say. Having grown up with five brothers and a sister, Colette Traoré started work when she was just 12, picking stones out of the cotton her mother would spin into fine thread. Even today, Traoré cannot write. ‘I had to learn a skill of some sort in order to survive,’ she explains. At 17 she applied to a textile factory to train as a weaver. The trainer rejected her: ‘You’ll never do it. You’re a woman.’

Apprenticeship as a weaver

Traoré eventually found a mentor to support her application, a village elder whom the trainer respected. And so she took up her apprenticeship, surrounded by men who kept telling her she was not suited to the job. When the six months were up, she was the only one out of the group of apprentices who had not dropped out. Despite the pain in her arms and shoulders. ‘Today my foreman says I was his best pupil,’ says Traoré, laughing and clapping. There is a hint of satisfaction at her male colleagues’ expense.

On completing her training, Traoré rented a loom and sold her textile products at the market. In 2004 she joined forces with other female artisans to form the co-operative Affat. Together they bought their first loom. They used this to make fabrics which local sewing shops would turn into clothes and bed linen. Business was good. Affat was the place to go if you needed a wedding dowry. And it was popular among tourists too.

Funding for small and medium-sized enterprises run by women

Then, suddenly, in 2012 war broke out in Mali. It was a major setback for the country’s economic development. Affat survived, although the tourists stayed away. Today Traoré even sells her fabrics to buyers outside Mali, in Sierra Leone for example. She has received support from GIZ on behalf of the German Federal Ministry for Economic Cooperation and Development and the European Union. Its activities seek to stimulate business at the local level, with a key focus on strengthening the efforts and creativity of women in particular. Funding is therefore provided to small and medium-sized enterprises run by women – including Colette Traoré’s weaving business. Special courses are organised to teach participants how to register a business, do the bookkeeping or apply for a micro loan. Marketing is also an important element of the course, since it helps the women to widen their customer base in the long term.

As a result of these measures, Traoré has had the opportunity to take part in trade fairs in Bamako and neighbouring Senegal. Furthermore, her weaving business has received financial support. This means she has also been able to buy a new handloom to process a greater volume of textiles.

Thanks to this support, her weaving business has doubled annual profits from around EUR 1,500 to EUR 3,000. Traoré now takes home up to EUR 75 per month. That is well above the country’s legal minimum wage of EUR 61 per month. There have been times when she has earned more than her husband, a teacher. ‘He is now the school principal and we earn around the same,’ she says. The couple’s two daughters never have to help out in the weaving shop. The older girl attends the grammar school and has hopes of becoming a lawyer. Her younger sister wants to work in health care.

Support for women developing their potential

The circumstances of women receiving support in Mali are varied. On the one hand, there are women like Colette Traoré, who have already built a successful business and want to take it a stage further. And on the other, there are women who need initial support with finding and developing their potential. Women like Néné Bakadji, who was so poor that her eldest son had to leave school in order to support his mother. At around the same time, her husband turned his back on her and left.

The 45-year-old sits in the yard of her house, dips a square of white cotton into a tub and pulls out a dripping black mass. She wrings it and wrings it until the cloth gives up no more black water. One of the three employees watches closely.

‘Our family is saved,’ says the entrepreneur

Bakadji has been dying cotton and printing it with traditional patterns since her adolescence. In the past, she used to sell perhaps six of her fabrics on market day. Today it is not unusual for her to receive a bulk order for 40 of them. For having taken part in a training course organised by GIZ, the entrepreneur now distributes business cards and advertises on local radio stations. She also travels to trade fairs to get her products more widely known. She has her own shop in Mopti and even ships her products to Burkina Faso.

For Néné Bakadji, life is good. Her dye business brings in enough income to support the whole family. That has grown in the meantime to four children and two grandchildren – and her unemployed husband, who came back to her. ‘Our family is saved,’ she says. But unlike Colette Traoré and other women, she does not see herself as a boss. ‘That’s still a role for the man.’