A new generation of young Iraqi entrepreneurs are confronting the country’s challenges, even during the coronavirus pandemic.

The streets are eerily silent in Mosul’s old city. A fierce nine-month battle against Isis in 2017 left this once-bustling quarter in ruins and reduced its historic buildings to rubble. Even now, Iraq’s second-largest city is still reeling from Isis occupation, but there are visible pockets of progress. Climbing the stairs to the Mosul Space innovation hub, the atmosphere lifts. The door opens onto a modern, open-plan room where young Maslawis, as the city’s residents are known, work to develop ideas that look ahead to the future.

One of them is 23-year-old electronic engineering graduate Salih Mahmod, who devised the concept for the innovation hub back in 2014. He was in the first year of his engineering degree and frustrated with learning solely from books rather than also developing practical skills. Reading about makerspaces, that is, high-tech workshops offering digital training and opportunities to engage in dialogue and implement ideas, in Germany and elsewhere, he was inspired. ‘I thought, why not in our city.’ So he ordered computers and printers, but 20 days after taking delivery of the first computers, Isis descended on the city and he had to put his dream on the backburner for the time being.

Mahmod’s family fled the terror group, finding refuge in the northern Iraqi countryside. Determined to continue, he and his friends offered improvised computer and programming workshops for people from the region. When Mosul was liberated in summer 2017, he returned and hosted an engineering festival that drew more than 500 participants. The tremendous response spurred Salih Mahmod on to set about realising his original dream once again.

He decided to work with like-minded individuals to create a meeting space where young technology enthusiasts would be taught the skills they need, such as programming, the use of new robotics technology and business aptitude. The space would offer them inspiration and an environment in which to develop their innovative ideas, paving the way for the establishment of Iraqi start-ups. Mahmod found a small room and began by launching a project to produce parts for broken hospital machines. Using a 3D printer, a group of young people created plastic screws and wheels that couldn’t be sourced locally, fixing incubators and other devices that had fallen into disrepair during the Isis occupation. ‘It was a clear example of how an innovative idea can be implemented in the field,’ said Mahmod.

Rapid response to the coronavirus pandemic

The young creatives were able to build on this experience when looking for ways to support the country’s medical professionals in the fight against the coronavirus pandemic. The makerspace in Mosul quickly switched to developing face shields and is now working with Iraq’s four other innovation centres. Over 10,000 of these shields have already been manufactured and delivered to hospitals throughout the country in recent weeks.

This was all achieved by the Mosul Space, as the innovation centre in the old city is now known, having grown from small beginnings. Salih Mahmod had already made contact with GIZ several years ago. The federal enterprise is working throughout Iraq on behalf of the German Development Ministry to promote the establishment of an ecosystem for tech start-ups and young computer enthusiasts. There are now five innovation centres in the country where Iraqis can be trained to meet new requirements on the labour market or prepare for self-employment. Over 5,500 people have now completed courses or attended events at these centres. Offerings include workshops and mentoring programmes for aspiring start-up entrepreneurs looking to find solutions to the challenges facing the country. 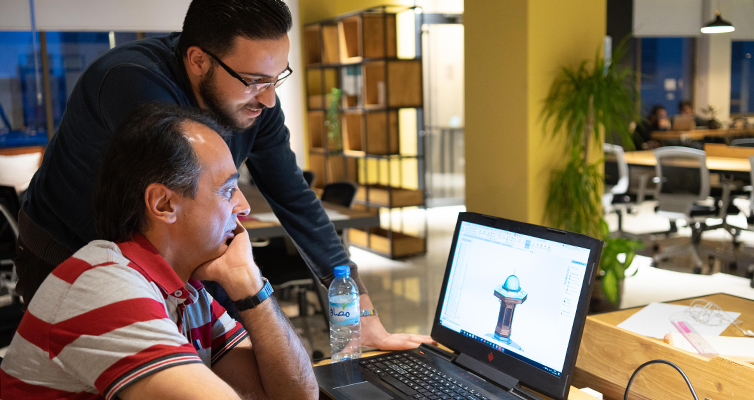 It’s not just in Mosul either. An hour down the road in the autonomous Kurdistan region, another hive of entrepreneurship buzzes with creative energy. Re:Coded House is pioneering the co-working concept in the city of Erbil. Prior to the coronavirus lockdown, a growing community of young people used the space to develop projects. ‘People tend to come here with ideas and we support them to make them a reality,’ said Wafa Al-Attas, Iraq Innovation Advisor at non-governmental organisation Field Ready.

She runs the makerspace in Re:Coded House and manages the fund for Mosul Space. Al-Attas explains that the concept is quickly catching on in Erbil, fuelling a fledgling creative ecosystem that, five years ago, didn’t seem possible. But strict regulations, cumbersome bureaucracy and limited infrastructure have dampened creative ambitions. Nonetheless, she says things have started to get off the ground. With GIZ’s support, Re:Coded House, which opened in April 2019, has become a platform for talented youth who want to bring their ideas to life.

Before the outbreak of the coronavirus pandemic, the space was busiest in the evening, when students came after university classes to work on their projects. Book shelves and indoor plants add a cosy touch. Re:Coded House is normally also a social hub. ‘I don’t have many friends here in Erbil, but in the makerspace it feels like a family,’ said 26-year-old Sliman Khazal, who fled Syria before the war.

He dreams of one day launching his edgy, geometric handbag designs onto the market. ‘Everyone in here is supporting me to work harder and dream bigger.’

Online courses during the lockdown

Re:Coded House, Mosul Space and the other Iraqi innovation centres are focusing during the pandemic on online courses and video presentations on subjects such as ‘software products for the post-Covid 19 period’. 24-year-old computer expert Mallak Al-Rifaie has been working on these kinds of ideas for some time. As the only female on her university degree course, she initially met with a lot of opposition. ‘At first, all the boys told me that I didn’t have a right to be there.’ But classmates quickly changed their minds when she gained top grades for her project which saw her develop a digital system to allow individuals with limited mobility to stay at home and receive rapid assistance in an emergency. Al-Rifaie also specifically promotes training for children. One of her teams of school pupils even won a national robotics competition last year. ‘I taught them university-level coding and they grasped it incredibly quickly. This generation is really smart,’ she says. And she doesn’t appear to be worried about the future.

The research in Iraq was conducted prior to the outbreak of the coronavirus pandemic. The young people used digital media to update the editorial team on their initiatives during the lockdown.

ICT – Perspectives for the Modern Youth in Iraq