Saving more lives thanks to modern equipment and up-to-date know-how for the fire service, other emergency services and the Ukrainian Red Cross.

Whenever the sirens sounded at the fire station in Zaporizhia, Valdimir Matrosov used to feel anxious – about those in danger because of fires or accidents but also about his own men who were going to help. The Deputy Fire Chief in this city in Eastern Ukraine knew that his colleagues lacked the right equipment to rescue men, women and children – and to protect themselves during dangerous jobs. 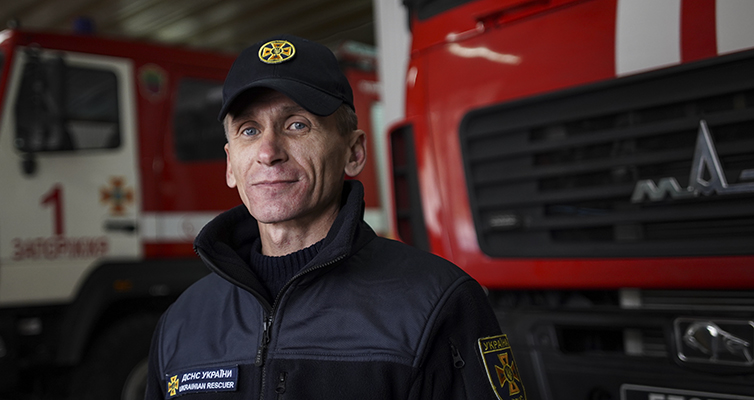 Now the 51-year-old does not have to worry quite so much. With support from GIZ, the emergency services in Eastern Ukraine have new equipment and have received training and advice. The project is part of the infrastructure programme in Ukraine, and a total of 6.5 million people have already benefited. 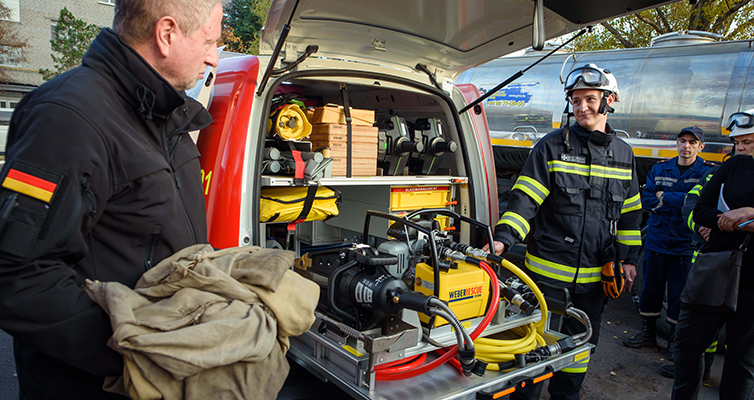 Inside one of the specially equipped emergency vehicles.
Photo: dpa

Matrosov’s new pride and joy is just 4.87 metres long. Compared with the monstrous fire engines parked inside Zaporizhia’s fire station, the compact VW Caddy™ initially looks rather insignificant. But when Matrosov opens the doors, you realise that this unassuming van is, in fact, a life-saving multipurpose vehicle. The load compartment has been fitted out with everything the firefighters need to put out fires and save lives.

‘It’s a bit like the Ukrainian fire service’s Swiss Army penknife,’ jokes Christian Poschmann who is in charge of the disaster management component at GIZ: ‘We’ve used every square centimetre of space to fit in all the equipment needed to fight fires and provide medical and technical help. It’s a quantum leap forward for the emergency services.’ 37 of these compact all-purpose vehicles were purchased as part of the project. They have been so successful that the Ukrainian Government is now funding the purchase of 37 similar vehicles. 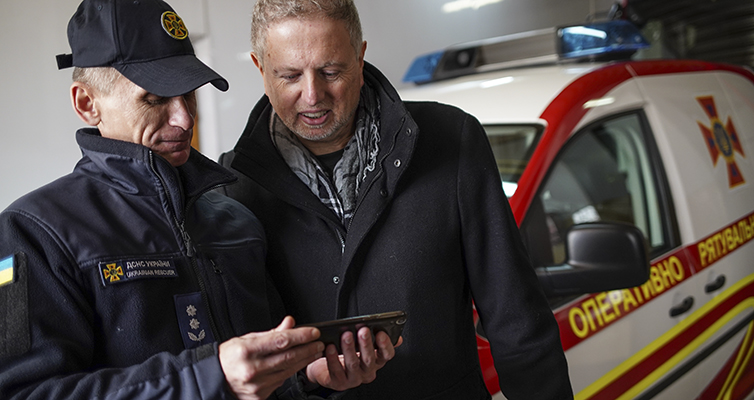 Christian Poschmann from GIZ developed the concept behind the life-saving multi-purpose vehicles with Ukrainian firefighters.

Working with Ukrainian and German firefighters and fire engine designers, Poschmann developed the all-terrain vehicle specifically for the Ukrainian fire service. Tucked away inside the Caddy™ is everything the firefighters could possibly need, from fire extinguishers, a defibrillator and first aid equipment to hydraulic tools for rescuing people who are trapped, a chainsaw and high-performance lamps. Despite being packed full of equipment, the vehicle is fast and manoeuvrable.

Emergency lane is too narrow for full-size fire engines

‘Even with the blue lights and siren, our big, heavy trucks often used to get stuck in traffic,’ adds Valdimir Matrosov. ‘The emergency lanes were often too narrow for the trucks. But the Caddy™ means we can get to fires and accidents much more quickly.’ 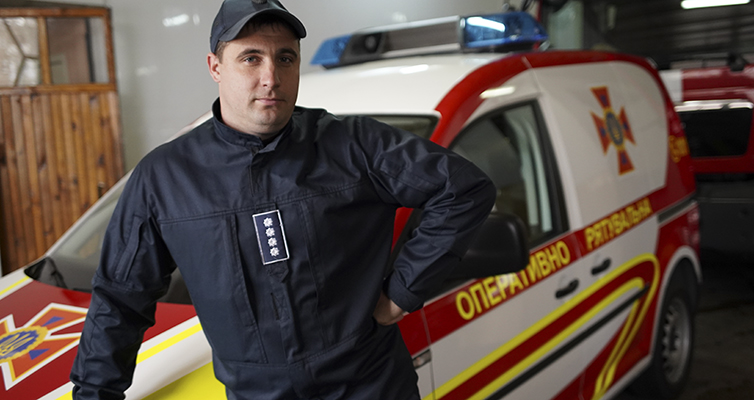 Firefighter Ivan Bova and his colleagues are quickly on the scene.

The emergency services in Eastern Ukraine have been called out much more often over the past five years. Around 1.5 million people have fled the violent conflict between pro-Russian separatists and the Ukrainian army, many to neighbouring regions such as Zaporizhia. Like other public institutions, the fire service has been overwhelmed by the major influx of people. ‘The emergency services were simply unable to guarantee protection for the growing population,’ says Christian Poschmann.

To ensure that people get rapid and effective help despite the tense situation, GIZ has been working on behalf of BMZ since 2015 to strengthen Ukraine’s fire service, other emergency services and the Ukrainian Red Cross. The first step was to assess what was needed. The fire service needed vehicles, but many fire service buildings were also dilapidated and out of date. Fire stations, control centres and storage have now been modernised.

‘Thank goodness, none of my men has died doing his job,’ says Valdimir Matrosov and thumps his fist on the table as if to say ‘long may that remain the case’. But extreme heat, collapsing buildings and toxic gases have injured many emergency service workers over the past few years in Ukraine. Matrosov, an experienced firefighter, believes many of these injuries could have been avoided with the right protective equipment.

And his firefighters’ safety is his top priority. ‘They risk their own lives to save others. That’s why they deserve the best possible equipment and the best possible protection,’ he says. Since Eastern Ukraine took delivery of 2,000 sets of breathing apparatus and protective equipment for around 4,000 firefighters, Matrosov too has been breathing more easily when the sirens go off in Zaporizhia.

150 units within Ukraine’s state emergency services in 120 municipalities have been given new equipment. / 30 per cent fewer people have been killed in fires since the fire service has been better equipped. / More than 140 human lives were saved in 2018 thanks to improvements in the ability to provide technical help in the case of accidents. / Contact: Christian Poschmann, christian.poschmann@giz.de