Farmers in northern Iraq are employing refugees on their farms. Milking machines are making work easier and increasing revenue.

It’s just after 8 am. The 200 sheep and goats on farmer Hassan Othman Pirmam’s farmstead in Bastoora, near Erbil in northern Iraq, jostle to get out of the pens. The surrounding meadows, now luscious green in the spring, are beckoning. But before the animals can graze they have to be milked. 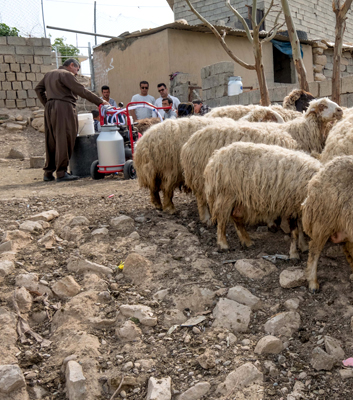 Time to be milked: animals wait on Pirmam’s farmstead in Bastoora in northern Iraq.

The animals wait patiently while shepherd Mahmood Said Hussein herds one sheep after the other to the milking machine. His wife Huda Ali Khalaf grabs one of the sheep and places the teat cups over its teats. The milk then flows evenly into the container. This is firmly integrated into the machine and cannot tip over.

A big advantage, says Khalaf: ‘Until a month ago, I milked the animals by hand each morning. It was quite annoying when the animals overturned the milk bucket as they fidgeted. Every week we lost a few litres of milk this way.’

Now only half as much time spent milking

It used to take Khalaf almost three hours to milk all 200 animals. The arduous work had already given her chronic tendonitis. The pain in her arm is now fading and the time she spends milking has been halved. This is thanks to the electric milking machine that farmer Pirmam has been using since early 2018.

Equipping farmers with milking machines is one example of the quickly realisable and fast-impact projects implemented here by the Deutsche Gesellschaft für Internationale Zusammenarbeit (GIZ) GmbH. The aim is to improve the living conditions of refugees, internally displaced persons and locals from the host villages in northern Iraq.

The various projects are financed by the EU Regional Trust Fund in Response to the Syrian Crisis, also known as the Madad Fund, and the German Federal Ministry for Economic Cooperation and Development.

150 farmers in the region have received milking machines. They all employ Syrian refugees or internally displaced Iraqis. The daily work has become much easier, particularly for the 530 women who milk the animals, something that Khalaf can confirm.

The Syrian Khalaf fled with her family from her homeland to northern Iraq.

The mother of seven has been living in northern Iraq since July 2013. The Syrian fled with her family from the Islamic State terrorist militia and the civil war in her homeland. ‘But we were simply incredibly lucky,’ she says looking back. Within a week, she and her husband found jobs with farmer Pirmam: Hussein works as a shepherd and goat herder, while Khalaf looks after the milking as well as the cheese and yoghurt production. Having their own home on Pirmam’s land and a monthly wage of 500,000 Iraqi dinar – that’s nearly 360 euros – has helped them make a fresh start.

Good business with cheese and yoghurt

From Pirmam’s point of view, this is not only a stroke of luck for the refugees but also for him: ‘The chemistry between us has been right from the beginning. The man has a lot of experience in his job and does his work fantastically. His wife knows how to make good goat’s cheese and delicious yoghurt from sheep’s milk. I don’t have to worry about anything anymore, but can now devote myself to the other tasks on the farm.’

In addition to livestock farming, Pirmam also grows wheat and barley on his 25 hectares of land. He has his work cut out with the sowing, tending and harvesting, so he is delighted to have found helping hands with the Syrian family.

Khalaf’s family had sheep and goats when they lived in Syria. She therefore knows the business and was immediately able to throw herself into the work at Pirmam’s farm. In spring, when the meadows are green and the animals provide a lot of milk, Khalaf produces 20 kilograms of goat’s cheese and 40 kilos of sheep’s milk yoghurt per day. Pirmam sells these for 280,000 dinars, which is around 200 euros. The available feedstock becomes increasingly scarce as the summer progresses. The animals produce less milk. Yields are halved later in the year and reach zero in winter. Nevertheless, the dairy products are good business, the farmer says: ‘We make good profits with them for several months. The milking machine has also increased the milk yield.’ The reason: the machine doesn’t get tired. It milks evenly to the very last drop, thus stimulating the animals’ udders to produce more milk.

The children feel at home in northern Iraq

Farmer Pirmam took care of the refugee family right from the start. He persuaded the school authorities to provide the seven children with extra tuition. They had missed lessons as a result of fleeing the situation in Syria, and first had to learn a new language – Sorani. 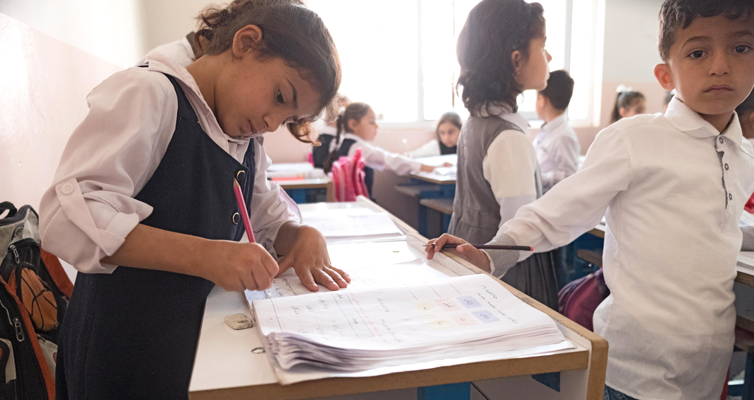 Refugee children learn together with Iraqi girls and boys.

Their mother recalls: ‘The children initially found it difficult to settle in their new environment.’ But that’s all in the past: ‘They now live with the farmer’s children like brothers and sisters. I’m fine too. We’re well integrated into the community.’

Could she contemplate returning to Syria? The young woman reflects for a moment: ‘I don’t think so. Nothing is like it used to be. We’ve made our new home in Bastoora, here we are happy.’

Supporting refugees and host communities in the countries bordering Syria