Harvesting in a changing climate

Who would be a farmer? Out in the fields day after day tending the maize crop beneath the burning sun? And still not earning enough income to support a family? ‘I couldn’t have lived the life of my parents, who were so poor they couldn’t even afford to send me to school,’ says Charles Ogolla, shaking his head. He never even considered it as a younger man, preferring instead to move to Nairobi where he took a job as a security guard. But things didn’t turn out as he had hoped and he found it difficult to build a life for himself. He lived an impoverished existence in a slum. Now the 40-year-old is back home, standing on his own land near the provincial town of Kisumu in western Kenya. He shows off his farm and fields with tangible pride. 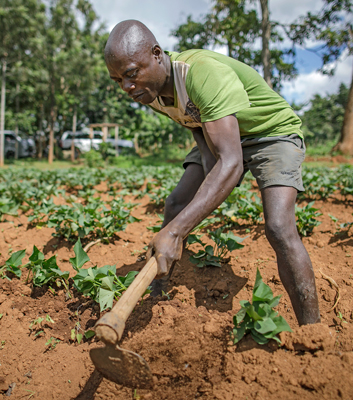 Ogolla has learned how to set up and manage a successful farm in times of climate change. He and other small farmers in Kenya have been supported in this undertaking by projects implemented by the Deutsche Gesellschaft für Internationale Zusammenarbeit (GIZ) GmbH on behalf of the German Federal Ministry for Economic Cooperation and Development (BMZ). In these projects funding has not been the key issue: it is about something more precious than money – education and the exchange of knowledge.

Ogolla could not put up with life in Nairobi any longer: ‘Poor work, poor pay.’ But he was also reluctant simply to return to his village and be forced to admit his attempt to find a better life in the capital had failed. There had to be a better solution. By chance he heard about the training courses for farmers. ‘I went to the Ministry of Agriculture and they gave me the address of a training centre in Bukura.’ His plan was to take over the land owned by his parents and try something innovative. 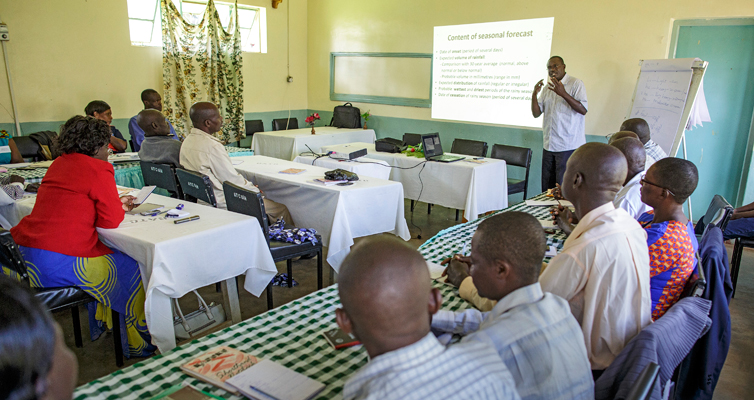 Class in the training centre

The training centre teaches participants basic agricultural principles: why crop rotation is important; how to apply fertilisers correctly; how to set up a compost heap, etc. Knowledge is the key, because many people here hold rigidly to old practices and the tradition of cultivating just enough corn to feed the family. Most participants at the training centre also learn for the first time about making hay. ‘That never used to be necessary, because animals always had enough to eat,’ says Paul-Mathias Braun from GIZ. But climate change has resulted in lengthier periods of drought.

With six children to feed, there is no stopping Ogolla. He now leases new fields as well as the land inherited from his parents. In addition to maize, he and his wife Eveline also grow manioc, beans and bananas. He sells hay and compost to his neighbours, and since milk is a very marketable product, he has bought a cow with the proceeds. ‘No half measures’ is his motto: ‘I want to be a farmer not a smallholder.’

“I want to be a farmer, not a small peasant”, Charles Ogolla says.

His latest project involves growing sweet potatoes, a vegetable that has become somewhat neglected in Kenya in recent years. The Kenyan Ministry of Agriculture is now promoting its return, since it is more resistant to drought and through cultivation has become vitamin-enriched – an important characteristic in the fight against malnutrition. Nearly one in three Kenyans lives in extreme poverty; one in five is malnourished.

Although people don’t like to talk about money in Kenya, the motorcycle in the yard and solar panels on the roof of the house are outward displays of Ogolla’s success. ‘The next step is a car,’ he says laughing. And it is a dream that is well within reach. He now also works on behalf of the training centre as a trainer of local farmers.

Alerts for the rainy season via text message

Knowledge transfer is also the order of the day a few kilometres down the road, where smallholder Rosemary Atieno is studying her mobile phone. She has just received a text: ‘Onset Oct week 2, cessation Dec week 3, irregular distribution, most rain Nov’.

‘It’s a big help,’ says Atieno. But why should an experienced farmer need to receive forecast data by text? ‘Unfortunately the climate has changed drastically,’ explains the single mother of three children. The main rainy season used to last from February to the end of May, these days it does not arrive until April. She tells us her grandfather could predict the exact date for the start of the rains by observing the giant Mugumo tree. ‘It would always shed its leaves just before the rains arrived,’ she recalls. But this giant fig tree is now something of a rarity in the region. ‘They’ve all been chopped down,’ says Atieno with visible sadness. 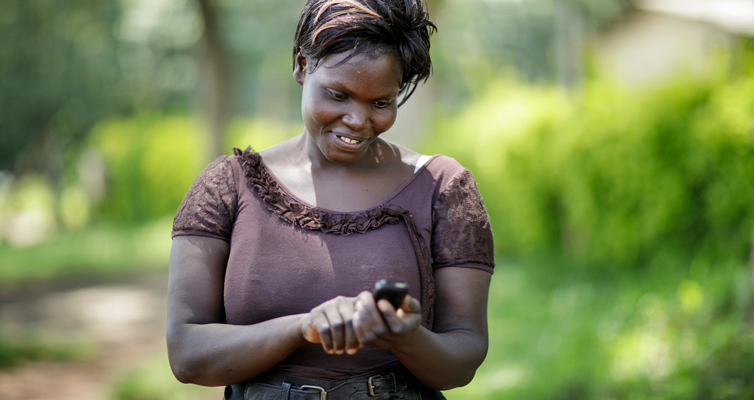 Although the Kenyan weather service has long been able to provide up-to-date information, it was never made available to the farmers, explains Gertraud Faltermeier from GIZ. She runs one of the Green Innovation Centres set up on behalf of BMZ. Access to accurate data is becoming increasingly important for farmers in Kenya. They are not just at the mercy of capricious weather when it comes to deciding when to sow, but also with regard to their choice of seed. If short rainy periods are forecast, fast-growing varieties have to be sown. The messaging service was only set up as a result of GIZ intervention and support.

Mangos instead of maize

In Thika, 30 kilometres north of Nairobi, there is more evidence of what can be achieved in African states when people are given access to knowledge and information. Here, Richard Kimani Rugendo, Managing Director of beverage manufacturer Kevian, tells a story that is hard to believe. Although Kenya lies directly on the equator and is one of Africa’s most fertile countries, the company used to import concentrate for its fruit juices. It was not possible to get mangos in the required quantity and of the right quality for an industrial operation. So GIZ brought all the relevant stakeholders to the table, helped create small-farmer cooperatives for mango cultivation, provided training for growers and set up collection points. 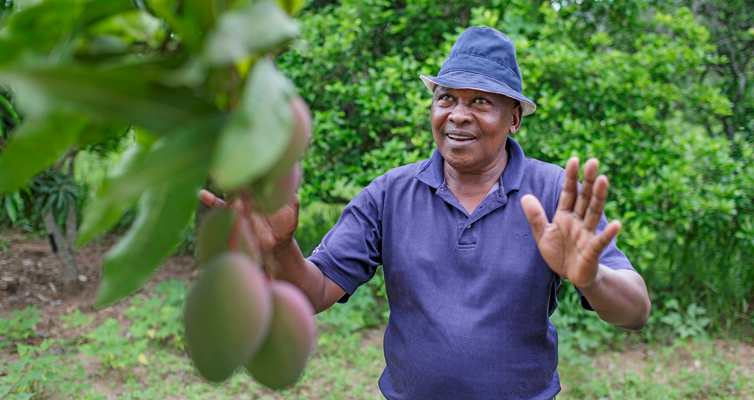 One of the farmers who now supplies Kevian is Boniface Mwilu. A friend told the 61-year-old about the GIZ programme in 2007. ‘I saw it as a great opportunity, because you can’t get very far growing maize,’ he explains. He started out with 44 mango trees, today he has 340. He has already learned important lessons about mango growing. His first trees were planted too close together and were not pruned correctly, but with subsequent saplings he was able to correct these faults. In addition, he makes sure he plants only high-yield varieties. He currently harvests up to 500 kilograms of fruit per tree. That provides him with an above-average income.

But Mwilu and other farmers face a fearsome enemy: the increasingly widespread fruit fly. Female insects lay their eggs inside the fruit, causing it to rot. The losses caused by the fly across Africa run into billions. But small farmers have neither the knowledge nor the money to protect their mango trees. The only protection comes in the form of expensive insecticides from South Africa. And yet Kenya has long had the required expertise. The problem is that there has been no transfer of knowledge from research to practice – until now.

Some years ago, the International Centre of Insect Physiology and Ecology (icipe) in Nairobi developed a protein bait to lure the female fruit fly. ‘The entire research project was finished and the results were lying in a drawer,’ Felix Zeiske remembers. He had arrived at icipe as an integrated expert. All that was lacking was the experience and investment to turn the concept into a marketable product.

So Zeiske, a geographer by profession, rolled up his sleeves and got to work. He discovered that a similar approach had already been adopted in Mauritius, where the basic material was a by-product of beer production. Zeiske and his colleagues looked for a company to build a production facility with financial support from GIZ, and then engineered a partnership with a brewery. The insecticide, produced by Kenya Biologics, has been available in Kenya for several weeks now – at one sixth of the price of the imported product.

Project: Green innovation centres for the agriculture and food sectors
Commissioned by: German Federal Ministry for Economic Cooperation and Development
Partner in Kenya: Ministry of Agriculture, Livestock and Fisheries
Term: 2015 to 2021

Agriculture is the most important economic sector in Kenya, accounting for 30 per cent of GDP. Over two thirds of the population rely on crop growing and livestock farming for their livelihoods. On account of low productivity, however, most families are only able to provide for themselves. In addition, lengthier periods of drought as a result of climate change are making farming increasingly difficult. This means prices for basic foodstuffs are rising. Around one quarter of the population is classed as malnourished. Green Innovation Centres are an initiative that enables GIZ to promote new methods and technologies geared to boosting productivity and income for small farmers. They benefit more than 10,000 families in western Kenya.
Mehr auf giz.de: