How arid land is becoming fertile again in Chad.

It is just after sunrise and Mariam Adam already has her hands full. The slim woman mixes a porridge of millet and rice for her large family. Sheik Saleh, who has just learned to walk, is first in line. The youngest son of the Abdallah family sits happily on a large blanket, eating from a white plastic bowl. One after another, his siblings sit down next to him. 25-year-old Mariam Adam gives each of her children breakfast.

‘We have three meals a day,’ says father Abdallah Mahamat Nour. He sits a little to the side on a woven mat, watching his six children and his niece, who lives with the family. Breakfast, lunch and supper are by no means something that Chadians can take for granted. The central African state, home to just over 14 million people, is one of the world’s poorest countries. The nation ranks 186 out of 188 on the United Nations Development Programme’s Human Development Index. Almost 90 per cent of the population lives below the poverty line, yet over the past few years Chad has taken in some 400,000 people fleeing neighbouring countries, not least as a result of the activities of Islamist group Boko Haram’s terrorist militia.

It is a rocky and sandy road to the Abdallah family’s home. The route from eastern Chad’s largest city Abéché is dominated by dull yellow. However, the landscape suddenly turns green when you reach the valley around Baïbor and 16 other settlements. There are trees, bushes and plants growing everywhere. Many smallholders are out in the fields today, harvesting millet.

‘Having access to water for crop cultivation positively impacts the basic supply situation of entire families. It’s true to say that children are now better nourished.’

Abdallah Mahamat Nour intends to pick the first tomatoes of the season from his bushes. Just after 7 am, when the heat is still bearable, is the best time for doing so. The 43-year-old has handed several wooden baskets to his oldest daughter Aché and these baskets are now hanging on the saddle of the donkey waiting patiently in front of the farmyard. The animal carries Aché and her younger sisters to the field almost two kilometres away. The girls are helping their parents while they are still on school holidays.

In the field, the smell of tomatoes hangs in the air. Farmed by Abdallah Mahamat Nour, this plot of land is around the size of three and a half football pitches. ‘In the past, I couldn’t do anything with this land, as it was bone dry.’ The idea of growing something as sensitive as a tomato plant was inconceivable, but now he points to a green hose that runs across the field from a small well – irrigation is no longer a problem here. The farmer crouches down and picks large, juicy tomatoes to sell at the market in a neighbouring village the next day.

The green miracle in this desert-like area was all made possible by walls built out of baked bricks. Such walls are a common sight in the regions of Ennedi, Batha and Wadi Fira, where the village of Baïbor is also located. Some are inconspicuous, while others can be up to two kilometres long. These water-spreading weirs ensure that, following rare, but heavy rainfall, the water from the wadis is held back and does not run off the dry, hard earth as quickly. A stepped system now retains it for longer in collecting tanks, stopping it from percolating away as fast. In this way, key groundwater reserves are being built up once again. The soil is now covered with plants, which slows evaporation, thus enabling the soil to store water for longer.

Kagne Pombe, Deputy Secretary-General at the Ministry of Agriculture, stresses the importance of having access to water. ‘Climate change has given rise to two trends in Chad: it either doesn’t rain at all or it rains too much.’ He says that because large sectors of the population live in poverty and have no surplus funds, they are hit particularly hard when rains fail and plants dry up.

The water-spreading weirs are not only vital for agriculture and for supplying people with water directly; they also serve as a meeting place for herders with their camels, cattle and goats. Some days, they water as many as 10,000 animals at the weirs. Livestock breeding is often the only source of income for people in the Sahel region. The weirs are useful to farmers and herders alike, and also serve to prevent tension and conflict arising over water supplies, not least between locals and refugees.

Heading to the market by car instead of donkey

Since 2012, the Deutsche Gesellschaft für Internationale Zusammenarbeit (GIZ) GmbH has been working in four of Chad’s eastern regions on behalf of the Swiss Agency for Development and Cooperation (SDC). GIZ International Services is using its expertise there to improve agricultural practices and thereby ensure food security. GIZ has had almost 150 water-spreading weirs built by local companies to irrigate a total area of 4,022 hectares in 284 valleys. The Abdallah family are one of around 15,000 households benefiting from this initiative. Smallholders were also provided with seed and given training at their agricultural cooperatives. All in all, living conditions have been improved for more than 110,000 people.

The Abdallah family’s harvests are now so large that they require the assistance of two neighbours. They fill one bucket after another, while Mariam Adam sits in the shade under a tree and washes the tomatoes. She is more than happy with the harvest. ‘You can’t even compare how much we harvest now compared with in the past. Back then, the donkey carried the tomatoes to market. Now, we often have to hire a car.’ The situation is similar for other families, who have increased their incomes by around 50 per cent on average.

In the meantime, Abdallah Mahamat Nour has cut large tufts of grass from the fringes of the tomato field and is using them to line his baskets. He works with quiet concentration, chatting briefly to his wife every now and again. They suddenly both laugh. In the past, unpredictable rainfalls often caused them major problems. The family owns around five hectares of land, but they could not earn a living from it. Like many other men in the region, Abdallah Mahamat Nour had to regularly look for work in Abéché and even in the capital N’Djamena.

The 43-year-old speaks openly about the problems of migrant workers: ‘Being away all the time was no good for our relationship. I often had sleepless nights as a result.’ Even now, it is still normal for many men to leave their families behind in their villages in order to find work. The women remain at home and have to take care of the work in the fields as well as looking after their families.

Their daughter has different plans for her future

Aché helps her father load up the last few tomatoes. Today, the family harvested six full baskets, each of which will bring in at least CFA 7,000 (almost EUR 11.00). The family intends to use their earnings among other things to pay the school fees for the year ahead, which come to the equivalent of EUR 15.00 per child. Two more of the children now go to school in addition to Aché.

Mother Mariam Adam expects that all of her children will attend school. For many families in Chad, the situation is different. UNESCO estimates that only one in four children complete their primary school education. Only in South Sudan is the proportion smaller. ‘I only went to Koranic school myself,’ says the mother, sounding a little embarrassed. ‘As girls, it was normal back then for us to get engaged at 14 or 15, marry, make a home and have children.’

Their daughter Aché has different plans for her future. She is looking forward to going back to school shortly, as it will help her on her way to achieving her goal of becoming a nurse one day. 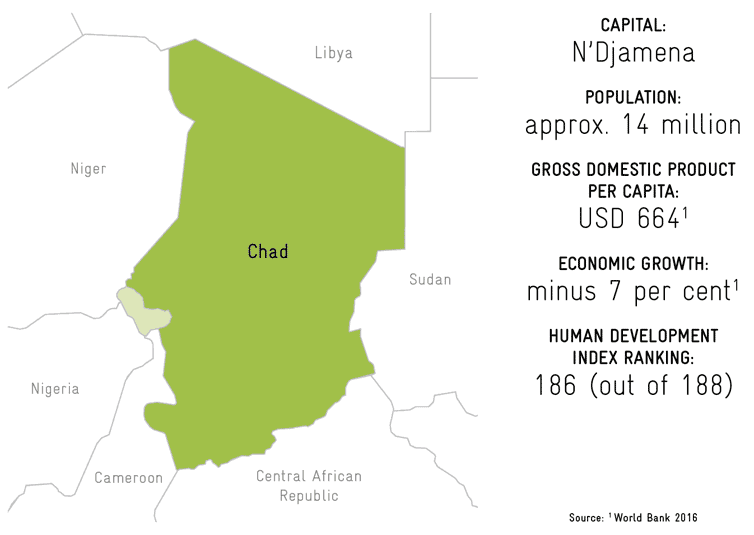 WATER IN THE DESERT

Water supplies for people and animals are extremely limited in the Sahel region of Chad in central Africa. Climate change is also leading to soil degradation. Water-spreading weirs are an effective means of making dry valleys fertile again. These weirs help to store water from the extremely rare rainfall, slowing the percolation of the water and thereby allowing groundwater reservoirs to develop. GIZ has had almost 150 water-spreading weirs built by local ­companies in eastern Chad, allowing an area the size of more than 5,500 football pitches to be irrigated for vegetable growing. The harvests are stabilising the food supply and herders can also water their animals at the weirs. All in all, ­living conditions have been improved for over 110,000 people in the region.
More on giz.de