Nigeria still relies on imports to supply the population with rice. Farmers like Hajiya Gambo Auwalu want to change this.

Hajiya Gambo Auwalu screws up her eyes. This gaunt woman is engulfed in the steam coming from a large rice cooker. Her eyes are watering and her forehead is beaded with perspiration, but the 55-year-old doesn’t mop her brow or complain about the heat. And when she emerges from the cloud of steam, she smiles and points to the grey-brown cooker. It produces the high-quality rice of which she and 5,000 other farmers from the Nigerian state of Kano are so proud. The local women have named their product ‘Tauraruwa’, which means ‘star’. She beams: the name is perfect, she thinks. There’s even a golden star printed on the packaging.

Along with more than 100 other women, Hajiya Gambo has come this morning to the meeting centre in Dawakin Kudu, a town on the outskirts of the economic hub of Kano in northern Nigeria. The women are discussing what they have learned about rice processing over the past few months, especially the parboiling process. This involves soaking the rice several times, then steaming it, drying it and finally milling it. The process drives the vitamins and nutrients in the bran into the rice kernel, and this makes the rice more nutritious than the conventionally processed white varieties that the area has traditionally produced. It also changes the colour of the rice to a golden yellow. Conventional white rice is filling but does not contain sufficient vitamins and minerals. The UN Children’s Fund UNICEF estimates that in 2015, at least 1.7 million infants in Nigeria were affected by severe malnutrition. That number has increased as a result of Boko Haram terrorism in the north-east of the country.

Hajiya Gambo explains how the rice is treated to retain as many nutrients as possible. She rapidly describes a process that actually takes several hours, and at the end sifts the processed grains through her fingers. ‘The quality is much higher now,’ she says, nodding approvingly.

She learned about the parboiling method on a training course organised by a non-governmental organisation in Nigeria, one of 11 local partners involved in the Competitive African Rice Initiative (CARI). The initiative currently cooperates with more than 90,000 rice growers and processors in Burkina Faso, Ghana, Nigeria and Tanzania and aims to increase that number to around 150,000 by mid-2018. CARI is financed by the Bill & Melinda Gates Foundation, the Walmart Foundation and Germany’s Federal Ministry for Economic Cooperation and Development. 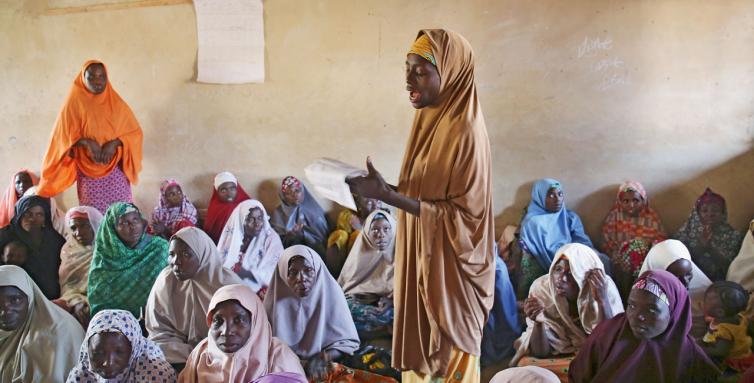 The community centre in Dawakin Kudu doesn’t just process rice, though. Hajiya Gambo has to shout to make herself heard over a deafening noise from one of the open rooms: ‘We also grind peanuts here to produce oil. And over there is the soap that we make.’

„We know more about rice now, so we can achieve more.“

The next day, Hajiya Gambo wants to show us where her own rice grows. It’s still cool in the early morning, and the sun is hidden in hazy clouds. Hajiya Gambo kneels down in the middle of the field: ‘We’ll be planting rice again here soon,’ she explains. For now, though, she and eight other women need to check their tomato plants, removing wilted leaves and carefully piling up the ripe tomatoes in their aprons. These nine women, who live in Garun Mallam, have formed a cooperative and have been working together since 2016 to farm the 10-hectare site.

They pay an annual rent of 50,000 Naira (around EUR 150) for the land, which the cooperative can afford out of what it earns. Hajiya Gambo and her colleagues work in silence, concentrating. Just once, she looks up and blinks. The training course has taught her how important crop rotation is and why she should grow different crops on the same plot throughout the year: ‘It’s good for the soil,’ she says. Before long, she’s finished checking her rows. Putting her hands on her hips, she straightens up slowly and then gestures expansively: ‘And it means we can now produce two rice crops and two tomato crops a year.’

The aim is to increase the rice yield from two tonnes per hectare to between five and six tonnes. That’s also what Hajiya Gambo is hoping for, and the Women Farmers Advancement Network now gives her access to affordable fertilisers to help her achieve her goal. Her own field is 2.4 hectares in size, and in 2016, she harvested exactly 32 sacks of rice. Although each sack weighed 100 kg, it wasn’t enough, and she doesn’t like to think back to that harvest. Wiping her hands, she frowns: ‘I wasn’t satisfied with the quantity,’ she says. She was able to sell just 20 sacks, as she needed the rest of the rice to feed her own family. The 55-year-old lives with her six children, who range in age from 17 to 40. Once their spouses and children are included, that’s a household of 25.

Gambo also supports her grandchildren, which is not easy, as she points out: ‘As well as feeding them, I need money to clothe them and pay their school fees.’ In northern Nigeria, school attendance is still not seen as the accepted norm, with girls particularly likely to be excluded from education. In fact, the current UNICEF report indicates that across the country, 8.7 million children of primary school age do not go to school. Instead, both girls and boys are often needed to work in the household or in the fields. But Hajiya Gambo thinks it’s important for her grandchildren to be educated, and the money she earns from growing rice and vegetables pays their school fees. In the past, she has despaired at poor harvests like the one in 2016. Now she taps the ground with her right index finger: ‘We know more now, so we can achieve more.’

Rice takes less time to prepare than yams and manioc

Rice is her priority, because she can earn well from growing and selling it. It is a popular staple food as it takes less time to prepare than the traditional tubers – yams and manioc. And it’s convenient, especially since increasing numbers of Nigerian women now work outside the home. The demand for rice is rising steadily, in part ­because the population is growing by 2.4 per cent a year: Nigeria currently has a population of 186 million. The cost of a 50 kg sack of rice is more than 20,000 Naira (around EUR 60) and has doubled over recent years.

As Africa’s most populous state, Nigeria has traditionally been reliant on imports of rice from Asia. In 2016, President Muhammadu Buhari made several speeches stressing that the country needed to break this dependency on imports. However, it remains unclear when – or, indeed, if – this will happen. It would require a massive increase in rice production, though that could also stimulate the economy: in 2016, Nigeria experienced its severest recession for 20 years, with inflation exceeding 18 per cent for months on end. One reason is that Nigeria, the world’s sixth largest oil producer, has relied on high oil prices for decades. Politicians are now increasingly turning their attention back to agriculture.

Hajiya Gambo glances at the field one last time to check that all is well. For today, her work is done here, and she sets off back across town. She crosses the road and stops by a sign bearing the letters ‘OFSP’. She laughs: ‘That’s something we’ve only just discovered.’ OFSP stands for ‘orange fleshed sweet potato‘, and the sign marks one of the first fields to be planted with a variety of sweet potato that until recently was virtually unknown in northern Nigeria. eHealth Africa, one of GIZ’s partners, wants to get more people eating these sweet potatoes. They are popular across the region, but Hajiya Gambo has had to get used to the bright orange colour. Now, though, she says she loves them. The advantage of this particular variety of sweet potato is its very high vitamin A content; around one in three Nigerians have a vitamin A deficiency.

„The processed rice contains a higher level  of vitamins  and nutrients.“

Before she returns home, she wants to drop into her cooperative’s community centre in Garun Mallam to check that all is well. Every day, some of the women responsible for processing the rice meet there.
Today, however, there is no rice to steam or dry. Instead, they are tidying up the small centre, which doesn’t take long. ‘I hope we can expand one day,’ says Hajiya Gambo, showing us though the open rooms. In one corner sits a half-full sack, waiting for purchasers. The large rice cooker is stowed tidily in another corner. A few women are sitting on benches, chatting. The centre is an important meeting point, and the women are talking about yields – a key topic, since they all depend on agriculture for their living.

On the outskirts of Kano, the rice processing that the women carry out on a small scale in their centres is performed by enormous machines. CARI also works with ­larger-scale project partners, such as the Popular Farms and Mills company, which operates one of the largest rice mills in ­Nigeria. Large companies of this kind are ­ essential to meeting the country’s demand for rice. Commercial Director Rajeev Singh believes this cooperation with CARI is immensely important: ‘It enables us to obtain more high-quality rice for processing.’ The company is now training around 20,000 farmers, who will become suppliers. And, says Singh, ‘since we started working together last year, we’ve been getting much less broken rice.’

The aim of the Competitive African Rice Initiative (CARI) is to make African countries less dependent on imported rice. It also supports farmers with low incomes, many of whom are women. CARI receives assistance from the German Federal Ministry for Economic Cooperation and Development, the Bill & Melinda Gates Foundation, the Walmart Foundation, private companies and local non-governmental organisations. It works with 11 partners in Nigeria.
The initiative is also active in Burkina Faso, Ghana and Tanzania. Its objective is to reach around 150,000 rice growers by mid-2018. Participating farmers in northern Nigeria have seen their incomes rise by some 170 per cent within three years.

In Garun Mallam, Hajiya Gambo is now on her way home to prepare her family’s meal. She’s long since decided what she is going to cook today: rice with vegetable sauce. ‘Our own rice, of course,’ she says, laughing – the rice with the golden star.