The electric miracle of Shenzhen, smart traffic lights in Jinan and a dialogue about future mobility – a trip through China with Guido Beermann, State Secretary at the German Federal Ministry of Transport and Digital Infrastructure

Behind Guido Beermann a yellow bus hums and rolls practically noiselessly into the depot of the Shenzhen Eastern Bus Company. Beermann squats down to look at the two black boxes that have powered a traffic revolution in the Southern Chinese metropolis – the batteries fitted below the electric bus. They are inconspicuous, but so reliable and powerful that Shenzhen has converted its entire bus fleet and most of the city’s taxis to electric power within three years, in order to reduce air pollution. Here alone more than 20,000 vehicles with alternative engine technology are on the roads. By way of comparison – in summer 2018, a total of 186 electric buses were operating in Germany.

At the depot in the east of the city, the Shenzhen Eastern Bus Company vehicles are serviced, repaired and above all charged. An ideal place for Beermann, State Secretary at the German Federal Ministry of Transport and Digital Infrastructure (BMVI), to visit in order to find out more about the energy revolution in China’s transport sector. He is accompanied by a German delegation, which is holding talks at various points with partners in Chinese ministries and businesses – sustainable mobility concepts are one point on the agenda.

The Shenzhen Eastern Bus Company has not only converted to electro-mobility. It has also introduced flexible local public transport. In addition to the fleet of white electric buses that serve fixed bus routes, it offers yellow electric buses which anyone can hire online provided they have 25 passengers. ‘Lots of people in Shenzhen live a long way away from their workplace. A group of colleagues can hire a bus together to get to and from work,’ explains Managing Director Lu Rong-yuan. The passengers effectively organise their own bus routes. The service is in great demand – there are a total of 900 ‘demand-driven bus routes’.

Two staff members with tablet computers manage the rosters for the 160 regular buses serving fixed routes from this depot. ‘Our Smart Traffic Cloud makes it possible. We can use it to order every bus to be here at a certain time with one click,’ explains Lu. A steering system like this is important because buses in China do not follow a timetable. The system stipulates how frequently the buses run, from every few minutes to every half hour in more isolated suburbs. The new system has made logistics much faster and easier to handle, says Lu, compared to the complicated system it replaced, with its timetables and paper lists.

The visit to the bus company in Shen­zhen is part of the Sino-German dialogue on promoting a mobility and fuel strategy for China. The Deutsche Gesellschaft für Internationale Zusammenarbeit (GIZ) GmbH is helping facilitate this dialogue. This is the first and only commission BMVI has so far awarded GIZ anywhere in the world, says Sandra Retzer, Head of Sustainable Mobility, Energy and Infrastructure at GIZ’s Beijing Office.

In both countries, transport policy aims to balance the imperatives of climate change mitigation, the need to reduce air pollution and the desire to secure energy supplies while meeting people’s expectations of affordable, safe mobility. This is a challenge – and it is hoped that the dialogue will produce some solutions. It is a dialogue that benefits both sides. The quality of life can be improved, especially in towns and cities, and both states will be able to attain the climate targets laid out in the Paris Agreement.

In terms of electro-mobility, China is well ahead of Germany. For years China’s Government has subsidised the purchase of electric vehicles and has installed the necessary charging infrastructure on a huge scale. By the end of 2018, the country had doubled its capacities in spite of its vast road network – from 2.5 charging stations per 100 kilometres to 5.7. Germany, by comparison, has 4.5 charging stations per 100 kilometres. In 2018, according to official figures, one million electric vehicles were sold for the first time in China. This translates as a market share of at least 3.5 per cent. The most recent figure in Germany was 1.9 per cent. In China, private cars are, however, rarely used over longer distances. The government has set road tolls so high that it is cheaper to take a high-speed train from one city to another than to use a private car. China is nevertheless seen as the world’s leading market for electro-mobility. ‘I am impressed by how much here is innovative – and I am convinced that this dialogue is extremely beneficial for both sides,’ says Guido Beermann, who is visiting China for the first time.

Chinese delegations are also visiting Germany to find out more about transport fields in which Germany leads the pack. They include intermodal transport, Sandra Retzer tells us. Intermodal transport involves linking different types of transport. In Germany, train passengers leaving the station generally find good bus, regional and local railway and bike-sharing services. In China, the stations for the new high-speed trains are often outside cities with very poor onward transport links.

The Sino-German project and the dialogue are so important to both sides that during Beermann’s visit to the Ministry of Transport in Beijing an extension beyond 2019 was discussed. ‘Transport is one of the most important sectors of our work. There are lots of opportunities to cooperate here,’ says Retzer, who is accompanying the delegation on its trip through China. Following political meetings at the Ministry of Transport and a discussion with representatives of German automobile manufacturers in China, the German group stops to visit China EV100. The think tank, which has close links to the Chinese Government, acts as a platform that enables the science and research community, the Government and industry to work together to promote electro-mobility. Liu Xiaoshi, Deputy Secretary-General of China EV100, surprises the German visitors with an announcement about the 2022 Winter Olympics in Beijing: one of the two host areas of the skiing disciplines, Zhangjiakou, has been planned as a low-carbon Olympic area. To this end, 1,800 fuel cell buses, taxis and logistics vehicles will be used. 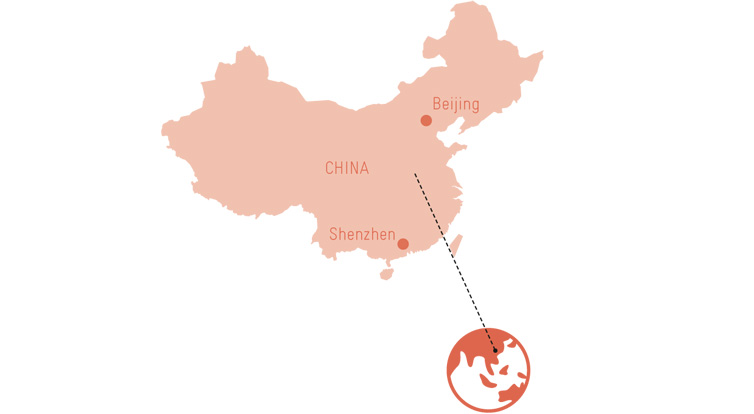 Beermann in turn reports on German industry’s projects in the field of hydrogen trucks and locomotives. During the talks, it quickly becomes clear that both sides are facing the same challenges: how can the costs of fuel cells be reduced? How can renewable energy be best used for electro-mobility? Beermann and Liu agree that they would like to continue their personal dialogue, especially in the field of alternative engine technology, including fuel cell technology.

The next stop on the group’s itinerary takes it to the mobility service provider Didi Chuxing. Like the US company Uber, it operates an app-based ride-sharing system, and also develops digital solutions in the field of transport management. The young company demonstrates on vast screens how it uses big data to make optimum use of its drivers. That is possible because in China it is fairly easy to access data and because data protection and privacy, as it is defined in the West, is not a feature. Didi has spread a digital net across Beijing and can see in every individual sector whether enough of its drivers are available to meet demand. Where this is not the case, they can be withdrawn from areas where demand is weaker and reassigned. Smart traffic lights developed by Didi have reduced traffic jams in the megacity of Jinan by 20 per cent. The system automatically adapts the traffic light phases to bring them into line with traffic volume, explains a spokesperson. Host Wang Ben, Didi Chuxing’s Vice President for International Business, flew all round the world to find out more on the ground about the traffic problems that various major cities are facing. Wang would like to get involved in Germany too at some point, he tells State Secretary Beermann. Wang is one of China’s younger generation. Having studied abroad, he effortlessly speaks fluent English with his visitors.

At the end of their trip through China’s cities and over China’s roads, Guido Beermann and his team have a wealth of new ideas to take home to Germany with them. ‘Even if not everything that is happening here can be transferred to Germany, it is good for both countries to discuss mobility, sustainability and artificial intelligence openly and intensively. GIZ plays an important part,’ sums up the State Secretary. One point that was raised at several junctures during their visit, and that is a much greater issue in Germany, is data protection and data privacy. This is also part of the Sino-German dialogue. It is a dialogue among equal partners, not a one-way street. —

China’s rise is unstoppable. China expert Professor Eberhard Sandschneider explains why, and how the West should respond.

Interview with Zheng Han, Chair of the Sino-German School for Postgraduate Studies at Tongji University in Shanghai