A fresh start with milk

Farming families in Sri Lanka are rebuilding their country’s dairy industry after years of civil war.

As soon as Kajendran Kailayapilai heard the dull thud, he knew something was wrong. The shelling was upon him so quickly, he barely had time to get his family to safety. Later he stood beside the remains of his cattle shed, beneath which lay the bloody carcass of his cow. It was a double tragedy for the farmer from the north of Sri Lanka: the cow is a sacred animal to Hindus, but with its milk, this cow also provided sustenance for his family. 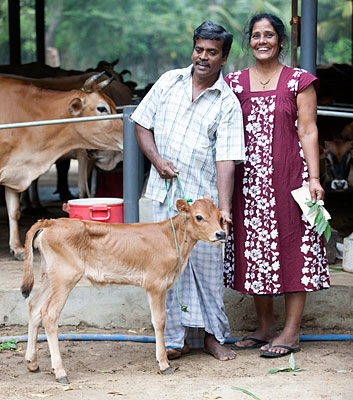 It is still visibly difficult for Kailayapilai to talk about this period. The 47-year-old farmer is frequently lost for words, able only to give a monosyllabic account of his experiences during the brutal civil war. For almost three decades, until 2009, the conflict kept a stranglehold on the island formerly known as Ceylon. Since their plot of land lay in one of the main combat zones, Kailayapilai and his wife and three children were forced to flee their home on several occasions. For years, they lived in camps and endured hunger. Their fertile land, 20 kilometres southeast of the provincial capital Jaffna, remained uncultivated. While many Tamils still suffer from the effects of the war even today, Kailayapilai has managed to make a new start – thanks in part to German support.

Biogas facility on the farm

The farmer proudly shows us around his immaculately kept small farm. A new cattle shed houses ten well-fed cows and six calves, while the small fields that encircle Kailayapilai’s house are planted with high-yield forage crops. He also uses manure from the cows and plant residues to run a small biogas facility. The pipe from the concrete underground container runs through the garden to the kitchen, where his wife Thirumahal demonstrates her new gas cooker. On a shelf in the living room is proudly displayed a trophy that the farmer received from the provincial government: ‘Farmer of the Year 2015’.

The family has benefited from a programme implemented by the Deutsche Gesellschaft für Internationale Zusammenarbeit (GIZ) GmbH to promote the dairy industry in northern Sri Lanka. The civil war had a particularly severe impact on the north and northeast of the country. Like the Kailayapilai family, hundreds of thousands of people were forced to leave their towns and villages while a bitter war of attrition was waged from 1983 to 2009 between the armed forces controlled by central government in Colombo and Tamil separatists from the Liberation Tigers of Tamil Eelam (LTTE). When British colonial rule came to an end, the Tamils saw themselves as victims of discrimination by the Sinhalese majority and sought to establish an independent state. According to UN investigations, the conflict was marked by very serious human rights violations on both sides and cost the lives of up to 100,000 people. Tens of thousands more disappeared without trace.

Somehow Kailayapilai and his entire family survived this difficult period, and he was finally able to return to his own village. But in the north of the island, in particular, restarting a farming business is not without problems: unlike in the south, the monsoon means that only one harvest a year is possible, so rearing cattle is seen as the ideal farming supplement to provide farmers with a regular income throughout the year. On behalf of the German Federal Ministry for Economic Cooperation and Development, GIZ implemented the project with two companies as part of a public-private partnership. The two companies involved are Tetra Laval, whose products include food packaging and equipment for milk production, and the retail chain Cargills. Both have a vested interest in the local production of fresh milk. And the Government in Colombo has also set a target for the country to produce enough milk to remove the need for imports. The partners have jointly invested EUR 0.5 million to date.

New jobs in the dairy industry

The farmers and the two companies were forced to start virtually from scratch. Initially, the milk from their few cows was used largely by the farmers themselves and their families. Today, three years after the launch of the programme, there are now 2,020 farmers in the region around Chavakacheri and Poonageri producing a total of 5,000 litres of milk every day. The partnership has developed a network of collection points and bulk storage tanks equipped with state-of-the-art cooling facilities, which has created additional jobs. Cargills buys the milk, processes it into fruit-flavoured drinking yoghurt and sells it nationwide. The partners also organise training courses for farmers, since many of them have relatively little experience with cattle. For example, it was common for the animals to be milked just once a day, which was enough for farmers’ personal consumption and made sense, given the lack of cooling facilities. But thanks to the new collection system, cows can now be milked twice a day – and that has stimulated milk production. 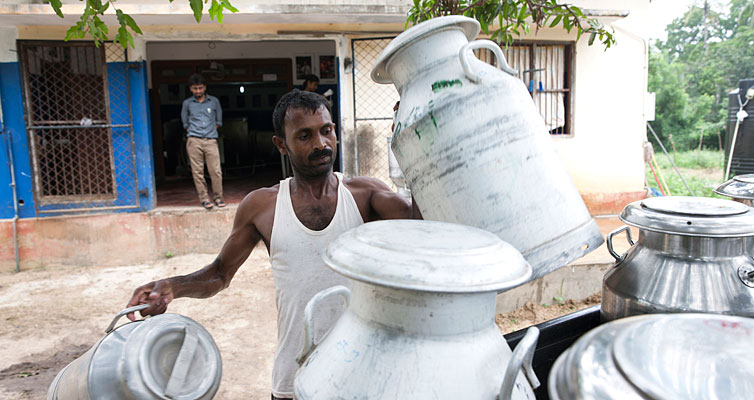 At the chilling station in Chavakacheri

Kajendran Kailayapilai also supplies his milk to the new network. His animals yield 65 litres a day: ‘That’s twice as much per cow as I used to get,’ he says. Furthermore, the fat content is higher, which is a clear indicator of milk quality. He has achieved this by using better feed, something he learned at the training seminars. Whereas he just used to let his cattle graze on ordinary grass, he now uses home-grown, energy-rich forage crops and special concentrate.

The farmer also gratefully acknowledges the significant assistance provided in the form of free veterinary care, the cost of which is borne by the project partners. The vets not only assist with vaccinations and diseases, they also organise artificial insemination using semen from high-quality breeding bulls. ‘I would never be able to afford a vet on my own,’ the farmer explains. Even so, his regular income these days is not at all bad by local standards: after deducting costs and interest on a loan he needed to rebuild the cow shed, he is left with around EUR 200 a month to support himself and his family. But Kailayapilai is keen to develop further: ‘I want to carry on expanding my farm,’ he says. And his facial expression leaves no doubt that he is ready to put his plan into action in the very near future. 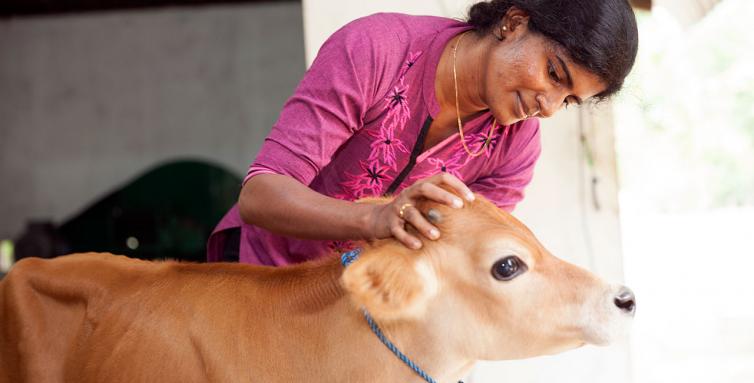 So has everything returned to normal in the north? Not according to Kailayapilai. There are still too many people without jobs: ‘We need more companies here, more investment,’ he says. And more than anything, he wants crimes committed during the civil war to be investigated: ‘So many people disappeared,’ he sighs; ‘Those responsible must finally be held to account.’