In eastern Ukraine, specially trained dogs are helping to treat disabled children and those traumatised by conflict.

The labrador clambers carefully over the red, blue and green foam blocks. He keeps turning around to check whether Arina can follow him. If she needs a bit longer to get over the obstacles, he just stands there and waits patiently. Crass is three years old, Arina six. When she was born, she was deprived of oxygen, and ever since she has suffered from spasticity. Until recently, she could barely walk, but thanks to Crass things are changing. ‘It’s completely amazing! Arina is making enormous progress. Crass is getting everything out of her,’ says Arina’s mother, Yelena Trofimova, a university lecturer.

She has come with her daughter to the dog therapy session at a rehabilitation clinic in Mariupol, a port city in eastern Ukraine. The clinic treats children of all ages with motor, cognitive and mental problems. In 2017, the specialist team was joined by Crass, a therapy dog. Arina is one of eight young patients currently taking part in a pilot project at the clinic. The project, supported by the Deutsche Gesellschaft für Internationale Zusammenarbeit (GIZ) GmbH, was set up to help boys and girls with disabilities. Some of the children have been traumatised by the war in eastern Ukraine. Funding is provided by Germany’s Federal Ministry for Economic Cooperation and Development.

For Arina, the time she spends with Crass is the best 30 minutes in the whole week. Crass jumps up eagerly and barks a greeting when the six-year-old enters the therapy room holding her mother’s hand. Arina smiles and throws her arms around her new friend. Later, as well as following him over the colourful obstacles, she throws him rings and balls, takes him for a walk on the lead and confidently gives him all sorts of instructions, such as ‘Sit!’, ‘Stay!’ and ‘Paw!’ She is delighted when the big dog obeys her every command. At the end of the session, Arina is lying, tired and happy, on the dog’s chest and can feel his heart beating. ‘I love Crass,’ she sighs.

‘Happiness is the best medicine, and Crass brings so much joy into our children’s lives,’ says Olga Brashuk, a qualified psychologist. She explains that all the children who regularly attend sessions with the therapy dog, a dog trainer and Brashuk herself have made tremendous progress in terms of their development. That includes Arina. ‘My daughter is moving much better, and she has opened up emotionally, too. Her speech has improved a lot, and she is less anxious, more confident and relaxed. I’m so grateful that we have been able to take part without having to pay,’ says Trofimova. Arina and her family were selected for the pilot project because Brashuk and her colleagues felt that the young girl’s case was particularly urgent and that she would almost certainly benefit from the therapy.

The war has left many children traumatised

The fact that this method of treatment is available at all in eastern Ukraine is partly due to the dog’s owner, Alexey Birintsev. When he had Crass trained as a search and rescue dog to look for survivors buried under rubble in the aftermath of bomb attacks, he discovered that dogs can also be used to help traumatised victims recover. The war in eastern Ukraine has left many people with physical and mental injuries. Fighting has continued just a few kilometres to the east ever since early 2014. The port city is not immune from the war between the Ukrainian army and pro-Russian separatists. Tens of thousands have taken refuge there since the conflict began, and you can often hear the sound of fighting along the nearby front. ‘Sadly, many children in Mariupol know what it is like to lose a loved one. So many of them would benefit from trauma therapy with dogs, but until recently there was nothing available here,’ explains Birintsev.

‘Since Alina started cuddling and playing with Hillary, she has allowed people to get closer to her as well.’
Ludmila Bylitko, a psychologist at the children’s therapy clinic

‘The idea of bringing together dog owners and psychologists in eastern Ukraine and creating therapy teams emerged in talks with the Ukrainian Red Cross in Mariupol and the local association of dog trainers,’ says GIZ expert Alexander Otto, who oversees the dog therapy programme. So far, 17 dog owners, 18 dogs and 41 psychologists have completed the training course and assessments developed by GIZ together with international and local specialists. ‘People have to be trained and assessed as well as the dogs,’ he adds.

Elena Lakhno, a 30-year-old mother of two, also passed the final assessment with her dog Hillary. A year later, Hillary is lying on a mat in a cosy play room at the child therapy clinic in Zaporizhzhya, a city in eastern Ukraine. Four-year-old Alina is brushing her white fur. ‘Look, Alina,’ says psychologist Ludmila Bylitko gently. ‘Hillary likes it when you brush her.’

The breakthrough came with dog therapy

The children’s welfare office brought Alina to the therapy centre in 2017. At the time, she couldn’t walk. She wouldn’t speak and often banged her head against the side of the bed. She was afraid of everything and everyone. She didn’t like being touched, trusted no one, cried frequently and couldn’t communicate. Her carers still don’t know what the little girl experienced in the first three years of her life. Both her parents were drug addicts. The welfare office tried various therapies but with little success – until Elena Lakhno came along with her Samoyed, Hillary. Samoyeds are a Nordic breed. They have been used for many years to pull sledges and as herding dogs. Alina was a bit afraid when she was first introduced to Hillary, but during the second visit the little girl finally began to open up to her therapists through interaction with Hillary. 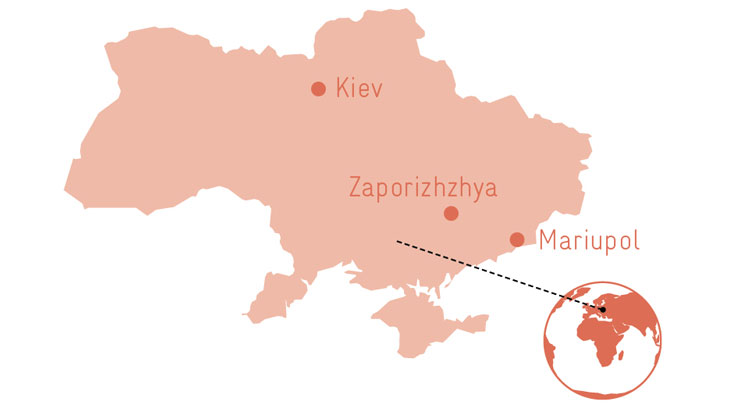 The Therapy Dogs project is just one of the initiatives set up as part of a wider infrastructure programme for Ukraine that has already benefited 6.5 million people. The programme has brought about improvements in the quality of educational provision for 40,000 children. Meanwhile, 3.5 million people now have access to more effective municipal services.

‘Since she started cuddling and playing with Hillary, she has allowed people to get closer to her as well. The dog stimulates every part of her brain. That explains why Alina is making such good progress with her motor skills. She even interacts now with other children. She’s more confident, calmer and no longer exhibits auto-aggressive behaviour,’ observes Bylitko. ‘Perhaps we would have got there eventually even without a therapy dog, but certainly not in such a short time.’

Since she learned how to help people, Hillary has completely changed not just Alina’s life but that of her owner, too. ‘Obviously, dogs can’t diagnose what is wrong with a person or provide therapy on their own. They’ll never be able to replace psychologists. But dogs and humans can make a great team and achieve tremendous results very quickly,’ says Lakhno. She comes with Hillary once a week to the therapy sessions in the play room. A course of dog therapy generally lasts several months but may be shorter or longer depending on the child’s needs.

Lakhno was so amazed and excited to see the progress made by the children after just a few sessions with Hillary that she has decided to study psychology part-time while continuing to work for now as a hairdresser. Once she completes the course, she hopes to make a career out of the work she currently performs as a volunteer. ‘I hope that will encourage other owners to train their dogs in the same way,’ she concludes. ’There are so many young boys and girls in eastern Ukraine who could benefit.’ 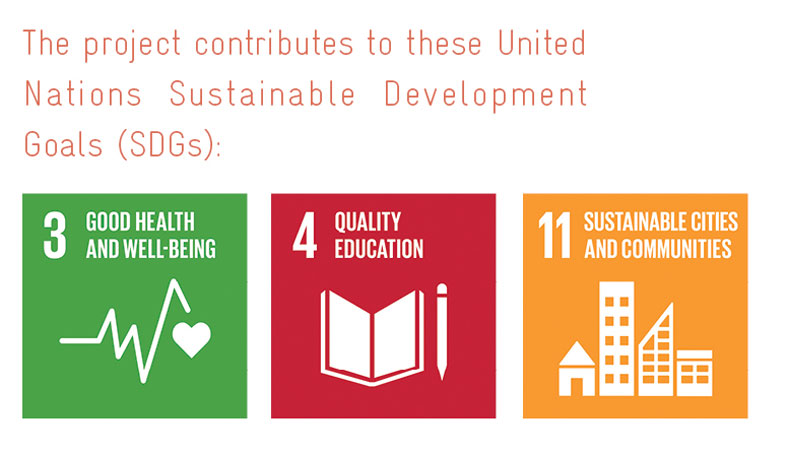