The forest is returning

GIZ is helping coastal inhabitants in Viet Nam to arm themselves against increasingly extreme weather and other consequences of climate change.

The bamboo walkway is just half a metre wide. It creaks and rocks a little with every step. Thach Soal walks along it, pointing to the ground beneath. ‘Until 1992 there were houses here,’ says the 66-year-old farmer, ‘but one bad storm destroyed the lot.’ Nothing remains to suggest there were once buildings on this site. The area is now covered by a dense forest of mangroves up to two metres in height. Their fan-like root systems are buried deep into the soil. The knee-high walkway is there to prevent villagers from damaging the roots on their way down to the sea. 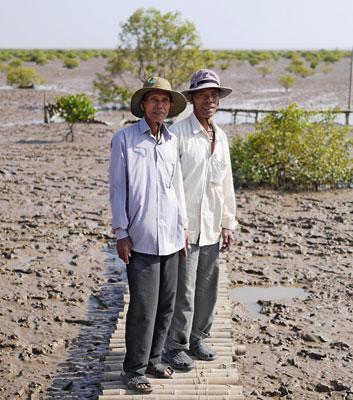 A fair deal – Farmers Thach Soal (left) and Duong Mienh are both custodians and beneficiaries of the mangrove forest.

The village of Au Tho B in Viet Nam’s Mekong Delta is now the site of a field study. Mangroves are being used to stop the advance of the sea and protect the hinterland. The project involves national and local authorities, as well as those living in the coastal villages affected.

The region faces a particular threat from climate change. The Intergovernmental Panel on Climate Change has identified Viet Nam as one of the countries that is most vulnerable. Large parts of the Mekong Delta lie less than a metre above sea level. Rising sea levels and ever more regular extreme weather events pose additional threats to the region. When high tides or storms wash seawater onto the fields, the land becomes unusable for years – a serious problem for Viet Nam’s third most important economic region and a key area for rice production. The population density is also high: approximately 17 million people live here – one fifth of the country’s total population.

Viet Nam’s authorities have been aware of the problem for a long time. In the 1990s they began a programme to restore the destroyed mangrove forests along the coastline. In Au Tho B at this time there was virtually nothing left of the natural forest, which once stretched along almost the entire coast in this part of Viet Nam. But it was not easy for newly planted mangroves to gain a foothold. ‘People didn’t take much care,’ says Thach Soal. Even though it was illegal, many people simply cut down the mangroves and used them for firewood or sold them at market. As a result, the mangrove forest remained sparse and did little to counter the advance of the sea.

The authorities achieved a great deal, says Christian Henckes from GIZ in Hanoi, ‘but a few things were not as good as they could have been.’ They planted the wrong species of mangrove, for example. And there was not enough money to plant mangroves in all the vulnerable areas along the coast. Most important of all, perhaps, local people were not made aware of how important the mangrove forests are for their habitat. These factors exacerbated the problem.

So since 2011, on behalf of the German Federal Ministry for Economic Cooperation and Development and with additional funding from the Australian Government, GIZ has been taking a different approach: the local population is now involved directly in managing the mangroves. ‘The people here have a vested interest in ensuring the forest remains intact,’ says Henckes, ‘since they are the ones who benefit.’ Inhabitants of the coastal villages involved in the afforestation project are given privileged access to the mangrove forest. They alone are allowed to collect dead wood and catch shrimp, fish and other marine creatures. At the same time, this is the most economically efficient way to manage the forest.

The sea is once again being kept at bay

In Au Tho B the approach is clearly working. The 450-metre bamboo walkway now stretches more than 50 metres into the flat alluvial land beyond the mangrove forest. Here, too, individual mangroves can be found growing naturally. At one time, the sea reached as far as the walkway. Now a sandbank is visible around 200 metres further out. The sea only comes up as far as the mangrove forest at very high tides or during severe storms. ‘Today, we really understand what it means for all of us to look after the forest. That’s why we do the work ourselves,’ says Thach Soal, who, like many farmers in the region, grows onions and chilli peppers. He is the spokesman for a group, set up with GIZ support, that coordinates management of the mangrove forests.

The group is open to all villagers. However, anyone interested in becoming a member must undertake to attend regular meetings and abide by regulations governing mangrove conservation. These rules include only entering the mangrove forests at low tide, when the water is clearer. This reduces the risk of treading on seedlings or small creatures. Around one third of the village’s 3,500 inhabitants have now joined the group. If members find someone cutting wood in the mangrove forest, Thach Soal explains, they tell him he is breaking the law. In serious cases they may also call in the authorities. Thach Soal even got together with other villagers to buy mangrove seedlings out of their own money; these are now being planted in bare patches of forest. ‘Because the day there is no more forest here,’ he says, ‘our village will die.’

The results of the intervention are tangible: now knee-high, the bamboo walkway was over 20 centimetres higher at the start, says Thach Soal. ‘The mud brought ashore by the sea stays where it is washed up. The mangrove roots hold onto the soil – and gradually the ground rises.’ In two or three years he hopes to extend the walkway by several hundred metres, so it reaches out across the reclaimed land to the sea. By then he hopes the mangrove forest will have become more extensive.

Today there is a great deal of activity in the fields that border the other side of the forest. It is almost time for the onion harvest. Diesel generators rattle into action. All over the fields farmers are busy watering neat rows of crops. In the field in front of Duong Mienh’s house it is the same scene.

Duong Mienh is another member of the mangrove conservation group. He has turned his veranda into a kind of meeting place. Once a month, group members meet here to share their experiences and discuss plans for the future. GIZ helps villagers to collaborate with local authorities on issues of forest management. The legal basis of this cooperation is an agreement reached between the group from Au Tho B and the local government.

Income has risen by around 60%

Duong Mienh has also built a small wall on one side of his veranda. Banners hang from the veranda roof with drawings illustrating core messages behind the mangrove plantation. They say things like: ‘We need your ideas for our plans to protect the forest!’ and ‘Say NO to destructive practices. Save our natural resources!’ The last drawing in the series depicts villagers reporting on their joint activities to representatives of the local authority.

‘Since the start of the project, our income has risen by around 60%,’ says Thach Soal. Revenues from the sale of fish, shrimp and collected firewood have risen considerably. Moreover, there is now a greater volume of seafood to be caught. The lack of conflict over the use of these natural resources has much to do with the fact that the village’s higher earners – such as the teachers or rice farmers – have no intention of making a living from the mangroves. However, they can still use the walkway to get to the sea.

Soc Trang Province, which includes the village of Au Tho B, is one of several Mekong provinces trialling the concept of mangrove afforestation. GIZ shares its experiences with the government in Hanoi, which in turn is already busy translating the lessons learned from mangrove management into current legislation. ‘That is a major success story,’ says Christian Henckes from GIZ.

Success which promises a little more security in the years ahead. For the challenges resulting from climate change are unlikely to be resolved that easily. ‘Although there hasn’t been a really severe storm in the region since 1997,’ Thach Soal explains, ‘we get major flooding on a regular basis.’ Today the farmers are much less anxious about saltwater reaching the fields and contaminating the soil. ‘Sometimes we hear the waves crashing against the mangroves at night – it can be really loud. But we’re no longer afraid of the sea.’ 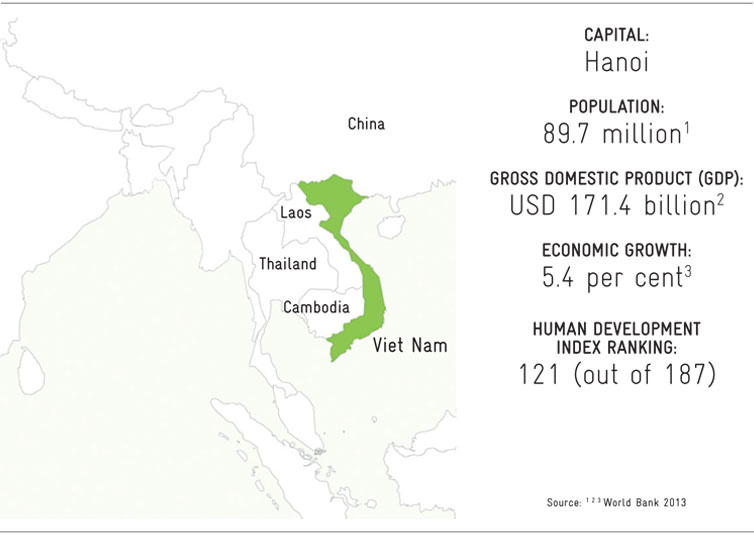 GIZ has helped put up inexpensive and environmentally friendly protective structures along almost eleven kilometres of coastline in five Mekong provinces. These measures have helped to save around ten hectares of flood plain and prevent erosion of up to 15 metres per year. Approximately 320 hectares of mangrove forest have been restored. Many inhabitants of the provinces now have secure livelihoods, around 60% of beneficiaries are women. And biodiversity in the region has increased by 70% in just four years. Today there are 30% more birds living in the U Minh Thuong National Park. The project is cofinanced by the Australian Government.
Mehr auf giz.de:

Video about the project