Electricity from the pig farm

Biogas plants are generating clean energy in Costa Rica, as a pig breeding business is demonstrating.

The squeals are ear-piercing as a worker clad in white protective clothing and rubber boots and carrying a bucket full of fodder enters the building. Even from outside, the smell is unmistakable: the sty is full of pigs. Juan Carlos Saenz peers inside through the open door. With over 25,000 animals, his pig breeding business in Cartago, central Costa Rica, is one of the biggest in the country.

At the same time, Saenz’ sows and piglets are the number one producers of biogas in Costa Rica – which of all the states in Central America is a paradigm of environmental friendliness. Nevertheless, life is not always easy for the private producers of renewable energy. Costa Rica’s many state-run hydropower plants appear to be meeting requirements – but only at first sight.

In summer 2015, for example, the state utility company announced that the country’s energy needs had been met for 75 days entirely with renewable energy – without oil, without natural gas, without nuclear. The announcement marked a remarkable achievement. So with around 90 per cent of its clean energy coming from hydropower, why invest in solar and biogas plants?

It is a question which many decision-makers in politics and the energy industry seem to be asking themselves. But there are serious problems with the country’s dependence on the turbines installed at reservoir dams and on fast-flowing waters. Costa Rica is drying up. This is due in part to the El Niño phenomenon – but to a much greater extent to climate change, which is altering precipitation patterns. Although average rainfall overall is no less than it used to be, the distribution is different. Periods of heavy rain are now followed by longer dry spells.

The goal: becoming climate-neutral by 2021

Without rainfall, many hydropower plants are unable to operate effectively and electricity production dwindles. That means Costa Rica has to fall back on fossil fuels. These are not only expensive, they are also harmful to the environment – and put at risk the country’s goal of becoming climate-neutral by 2021.

Producers like Saenz, whose company Porcina Americana breeds and slaughters pigs, prefer to rely on alternatives. Each year, his farm accumulates thousands of cubic metres of slurry and slaughterhouse waste, which the company converts into biogas in a new facility. The methane gas it releases is used to power the electricity generator. The biogas plant has already saved as much as 60 per cent of his farm’s energy costs. Furthermore, its use dramatically reduces greenhouse gas emissions, since escaping methane gas is considerably more harmful to the atmosphere than carbon dioxide.

Feeding surplus energy into the grid

So the hefty investment of USD 1.5 million for Porcina Americana’s biogas plant has been worthwhile. After just three years the plant will have paid for itself. It would be even more lucrative if the company were able to sell its electricity to the national energy utility. However, the state has no plans for this at present. It only aims to support companies on the path to energy self-sufficiency – which is why companies can feed surplus energy into the grid and then take it out again when their own demand increases.

Saenz might never have come up with the idea of the biogas plant if he had not had problems with his stinking slurry. This ended up in open cesspits, exposed to the full intensity of the Central American sun. The organic waste not only polluted the atmosphere, it also contaminated nearby waterways. Neighbours filed an official complaint; by 2011 the business was on the brink of collapse.

That was the point at which Saenz asked GIZ for support, particularly as experience with biogas plants in Costa Rica at the time was limited. Today the future looks great, says Saenz, and he is even in a position to expand his business. ‘If it hadn’t been for the ­biogas facility, we would have had to close down,’ the company boss explains.

‘The substrate from the pig breeding facility is ideal for use in biogas facilities,’ explains Ana Lucía Alfaro of GIZ. By this she means the animal excrement as well as the blood and innards from the slaughterhouses. Not only can it be used to generate electricity, it also cuts waste to virtually zero.

Today the only places that smell are the piggeries themselves. ‘But it’s nothing compared to what it used to be like,’ says Alfaro, who previously worked at the Costa Rican Ministry of Energy. Now, based in the capital San José, she coordinates the local activities of two regional programmes for renewable energy that GIZ is implementing on behalf of the German Federal Ministry for Economic Cooperation and Development. The objective is to promote clean energy in Central America, which includes building solar facilities and biogas plants. Similar activities are also in progress in El Salvador, Guatemala, Honduras, Nicaragua and Panama.

Another shining example of green energy production in Costa Rica can be found just 50 kilometres from the pig breeding facility in Alajuela, the country’s third-largest city. Here, the football club Liga Deportiva Alajuelense (LDA) has installed a solar energy system on the roofs of its stands. The electricity generated is sufficient to meet the needs of the entire 17,000-seater stadium, including its new floodlights.

The club needed a floodlighting system so that its matches could be broadcast on television and provide a source of income. As
one of the country’s most successful clubs, LDA also takes part in international competitions. But the floodlights initially pushed the club’s annual electricity bill up by over USD 70,000 – an enormous sum for a club with income well below that of the average German Bundesliga team. LDA urgently needed a financing option.

Support came from GIZ, who calculated the potential of putting a solar energy system on the roof and advised LDA on its installation. The Costa Rican Association of Solar Energy (ACESOLAR) also provided the club with support. The experts then came up with an interesting financing model: the system was bought by the first Costa Rican energy service company, a private financing agency which receives capital from an investment fund for renewable energy and energy efficiency. The agency now sells solar energy to the club at attractive low prices between 1,000 to 2,000 dollars per month. In six years the system will have paid for itself – after which time it will become the property of LDA.

Flagship projects: imitation is the sincerest form of flattery

Ana Lucía Alfaro – a keen supporter of LDA – is particularly pleased about the stadium’s solar facility. Her favourite club is now also a pioneer in the use of solar energy. And since the club is part of a flagship project, it is permitted to sell solar energy to the national electricity providers. So the club earns money selling green energy, and at the same time saves around 550 tonnes of carbon dioxide per year.

‘Projects like these send out an important message to the whole of Costa Rica,’ says Jürgen Popp of GIZ. And sure enough, more companies are already lining up. The meat producer El Arreo, for example, is in the process of building a biogas plant. This will enable the company not only to generate energy, but also to use it to power boilers which currently still run on fuel oil. And the country’s largest brewery has also recently switched to solar power and a generating plant fuelled by wood pellets.

Popp is already working on the next idea: Costa Rica’s pineapple plantations currently give rise to thousands of tonnes of unused organic waste. Scientists are now researching whether pineapple waste may also be suitable for biogas plants. If so, Costa Rica could soon meet its year-round electricity needs entirely from renewables, further reduce emissions and perhaps surprise the world with another success story on climate change mitigation. 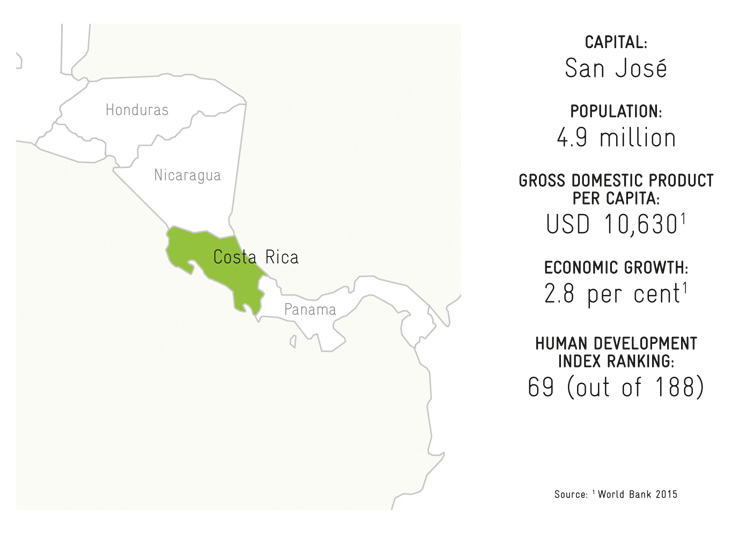 Expensive, environmentally harmful crude oil still meets around one third of the energy requirements of the Central American countries of Costa Rica, El Salvador, Guatemala, Honduras, Nicaragua and Panama. Although hydropower is well established as a renewable energy source, it is under threat from climate change. For this reason, GIZ is helping to increase the use and range of renewable energy in the region and to improve energy efficiency. It does this by promoting private and public initiatives and investments. In addition, it strengthens regional exchange with the aim of improving underlying conditions for renewable energy and energy efficiency. GIZ also develops basic and further training measures for technical experts, for example, as well as for decision-makers and managers from ministries and public administration.
Mehr auf giz.de