Down to the very last village

Assignment in Madagascar: on the road with a team of scientists to inform people about the plague in the highlands of the island republic

The blade of the penknife disappears into the clay wall right up to the shaft. ‘A rat hole,’ microbiologist Michael Nagel confirms. ‘In the wall right above the cooking stove.’ Then he carries on looking using the light of his head lamp. In the two-storey clay building, it is so dark that Nagel would barely be able to see anything at all without the light on his forehead, and the soot-filled air stings his eyes. He sees something else by the cooking stove. Right next to the rat hole he finds ash, leftover rice grains, the remains of a cassava tuber and rat excrement. The 37-year-old German scientist carefully pokes around in the mixture with the tip of his knife. ‘The excrement is still fresh,’ remarks Nagel to Raphaël Rakotozandirandrainy, a microbiologist from Madagascar. ‘There’s no better way of showing how strongly rodents are attracted by leftover food.’ Then the biting smoke forces them outside again. 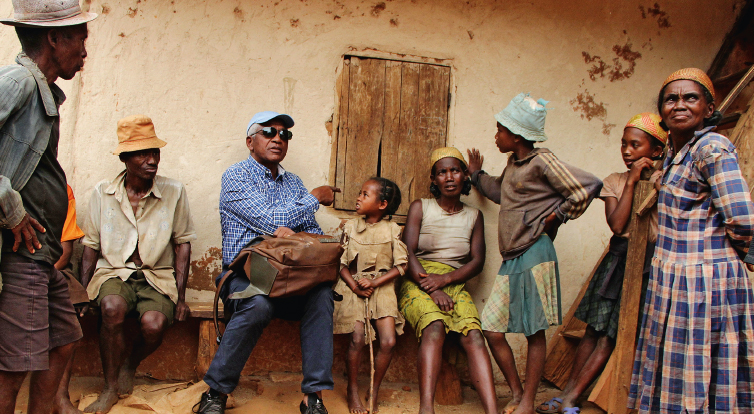 Raphaël Rakotozandirandrainy takes the results of the plague study directly to the people. The scientist is also mayor of a highland community.

There, the residents of the house and the Malagasy village of Ambohitravorano are waiting. The village is in the highlands around 260 kilometres south of the capital. They already know Nagel and are no longer surprised that this white man has made the effort to climb the long, steep path to their village. It takes a day by car from Antananarivo to the provincial capital Ambositra and from there, after an overnight stay, nearly another two hours to Andina. A few kilometres further on, the only way to continue is by foot up a mountain. ‘The only other foreigners who come here are looking for valuable minerals,’ says the scientist Rakotozandirandrainy.

A year earlier, in November 2018, an interdisciplinary team of scientists investigated why there are regular outbreaks of the plague in some villages, while other places nearby are spared. Andina, the municipality to which the village of Ambohitravorano belongs, is one of the ‘hotspots’. Nagel and his Malagasy colleague are now presenting their results to the people living in the region. As part of this process, Rakotozandirandrainy, who is also mayor of Andina, called a meeting on the central square the previous day. More than 1,000 people attended. 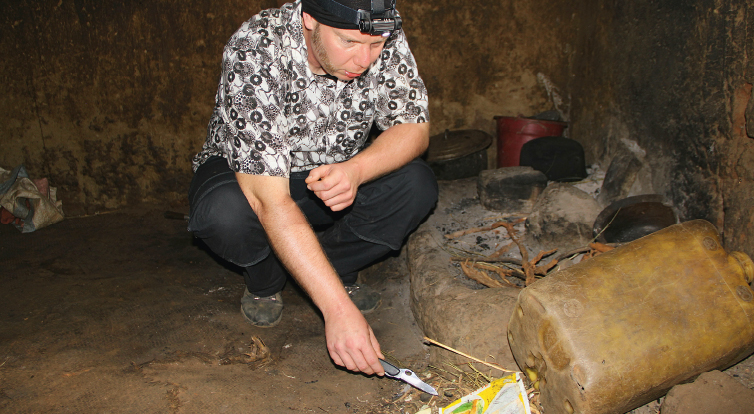 The microbiologist Michael Nagel examines the area around a cooking stove for traces of rats.

The scientists also take their findings directly to remote hamlets, where often only a few dozen people live. Raphaël Rakotozandirandrainy is head of the Institute of Medical Microbiology at the University of Antananarivo and a partner in Madagascar of the German Epidemic Preparedness Team (SEEG), to which Michael Nagel from GIZ also belongs. This task force is deployed when partner countries ask for rapid assistance because they are no longer able to control an epidemic themselves or want to be better prepared for future outbreaks. In acute cases, the task force can get to the partner country within 72 hours. Interdisciplinary teams are put together from a pool of experts in a variety of disciplines, including GIZ staff and university experts. 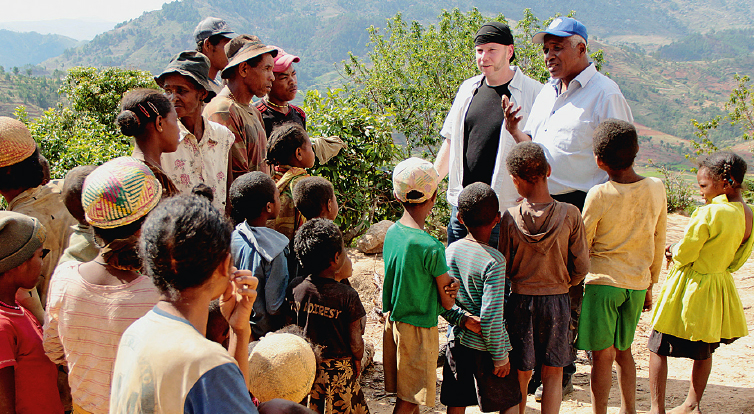 Along with his Malagasy colleague Raphaël ­Rakotozandirandrainy, he informs the village residents about the best protection against the plague.

In Madagascar, the government asked for support from the German Epidemic Preparedness Team due to the recurrent outbreaks of the plague. Even though the assignments are demanding, the scientists believe that the field work is vital. ‘Of course, germs can easily be diagnosed in modern laboratories throughout the world,’ Nagel remarks, ‘but whether a case of disease turns into an epidemic depends on many different factors.’ Preventing epidemics requires a better understanding of how different factors interact – which is exactly what the study in Madagascar was designed to do. The scientists put out traps for rats and mice in villages and smallholdings and asked people about their living conditions and what they knew about the plague. They recorded information on geology, vegetation and land use and collected samples. Most of the laboratory results are now available.

‘We were pleased that someone investigated it,’ comments Mariette Razafimalala, a 34-year-old farmer who lives with her family of seven in the house that Nagel has just left. Almost everyone here is barefoot, and the children have runny noses. It is very cool at night in the highlands, so the boys and girls often have colds. And as the houses only have small windows and people cook over open fires inside, people’s respiratory tracts are vulnerable. ‘We not only found the bacteria that cause the plague here, but lots of other dangerous germs too,’ explains Nagel, and his colleague Rakotozandirandrainy translates this into Malagasy, the language spoken in Madagascar. 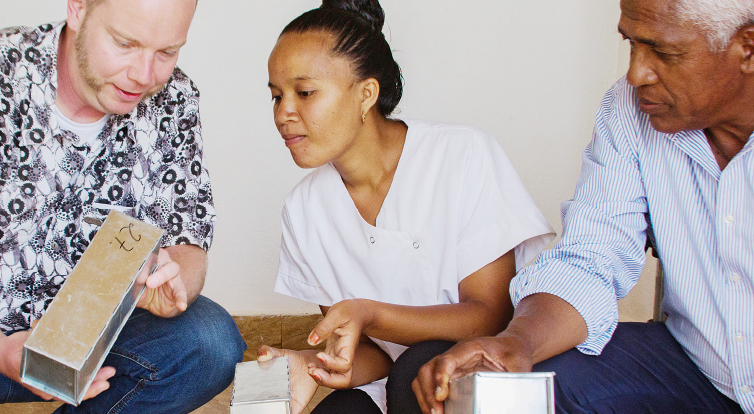 The team of scientists and a member of staff from the health station in Ampasina familiarise themselves with new rat traps.

Squeaking rats in the straw roofs

Rats can be heard squeaking from one of the straw roofs in the village. In Ambohitravorano, the scientists caught a particularly large number of rats in their traps. During the subsequent examination in the laboratory, it became clear how many lethal germs they carry. Nagel was surprised and alarmed at the wide variety. An assessment of the findings showed that Yersinia pestis, the pathogen that causes the plague and that was imported to Madagascar from Europe around 120 years ago, is widespread here. However, hantavirus, another deadly pathogen, was also found; the variety they identified causes serious fever and, like Ebola, leads to haemorrhaging. The scientists also found the bacteria responsible for trench fever, which causes meningitis, among other things. 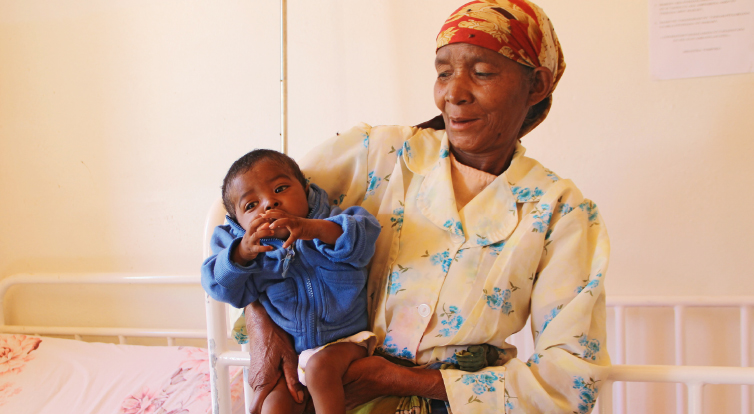 A young patient at the health station in Ampasina, which was set up with support from GIZ

The results of the study have clearly disproved two working hypotheses. Firstly, that some villages are free of plague germs. ‘The plague germs are everywhere all the time here,’ Nagel emphasises. Secondly, the results did not confirm that people in some villages are immune to the disease for genetic reasons. The men and women said that people had already died of the plague in their village many years earlier, but that their hamlet had always been spared in recent years, even in 2017, when the epidemic was particularly virulent in Madagascar. ‘You still need to protect yourselves better,’ Nagel impresses on everyone. Then he lists what they can do: ‘You need to get rid of the rats and mice in the houses and keep your food supplies firmly shut,’ he recommends, adding that there should be no leftovers either inside or in front of the houses. The people listen to him attentively, sometimes nodding. Then Nagel points to a hole in the straw roof of Mariette Razafimalala’s house: ‘Can you see that? A rat hole! The straw roofs make an ideal home for rodents. Best to swap them for corrugated iron roofs.’ The clay walls of the buildings also provide an ideal habitat for the dangerous creatures. ‘Fill the holes in your walls with concrete, cement or stones,’ Nagel advises them.

‘We can’t afford corrugated iron roofs,’ remarks Mariette Razafimalala. Depending on the size of the house, a roof like that costs the equivalent of EUR 300 – a fortune in the villages of Madagascar. The same is true of cement or supply boxes that can be shut so tightly that mice and rats cannot squeeze their way in. 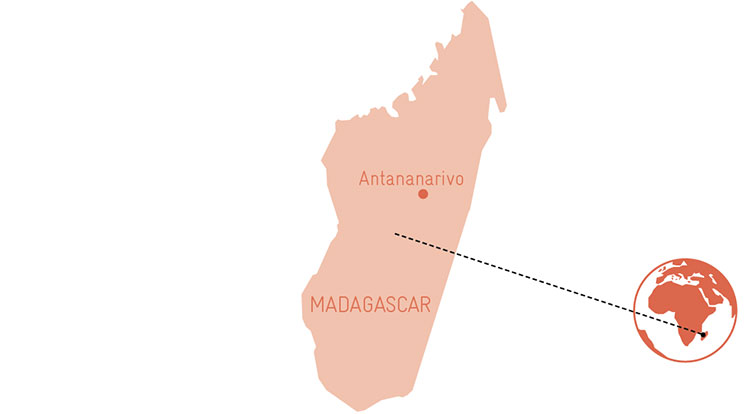 Madagascar is Africa’s largest island state and the fourth largest island in the world. The republic is one of the world’s least developed countries. More than three quarters of the population live in extreme poverty, and the share of poor people is particularly high in rural areas.

Saved by laboratory results and a health station

In Tsararivotro, the next village, some of the houses are built of burnt bricks, not just put together out of flattened clay. ‘Rodents have virtually no chance there,’ Nagel explains. He even thinks one of the buildings – made of bricks and built on a rocky plateau so that the rodents cannot eat their way into the house through the floor – is ‘almost ideal’. Moreover, the roof is made of corrugated iron. The inhabitants were not trying to ward off rats, however. ‘There are a lot of armed cattle thieves here,’ explains 42-year-old Rasoa Zararia, who lives in the house. ‘They often set fire to the straw roofs.’ The family sold two of their cows to pay for the corrugated iron roof. Cattle thieves in Tsararivotro have now stolen around 60 cows, almost the entire cattle stock of the village – including the last two cows belonging to the Zararia family. In Tsararivotro, there have repeatedly been cases of the plague; in 2017, Rasoa Zararia’s daughter caught the disease. ‘I didn’t know what was wrong with her,’ Zararia explains, ‘but I took her to Ampasina as quickly as possible.’ In the main village of the municipality, mayor and microbiologist Rakotozandirandrainy has set up a health station partly funded by GIZ. The German Epidemic Preparedness Team brought the equipment for the laboratory and trained the medical staff in the microbiological diagnosis of plague bacteria. That was what saved Zararia’s daughter. Eighteen years old at the time, she was promptly diagnosed as having the disease and recovered thanks to the antibiotics she was given.

Since then, people trust Rakotozandirandrainy even more. That is an invaluable advantage now. The village inhabitants are more motivated to follow the recommendations to protect themselves against the plague – at least if they have enough savings. And while he accompanies his German colleague back to the capital, the Malagasy mayor and scientist cannot stop thinking about how the work to renovate the houses could be financed. At one of the next local council meetings, Rakotozandirandrainy proposes that sustainable coffee could be grown and sold through a cooperative to subsidise the building material. The people of Andina are taking up the fight against the plague themselves. That could be a signal for the entire highlands of Madagascar.

The German Epidemic Preparedness Team was initiated by the German Development Ministry (BMZ) in cooperation with the German Health Ministry in response to the Ebola crisis in West Africa in 2014-2015. A core team based at GIZ tracks reports of the outbreak of disease worldwide. In consultation with the Bernhard Nocht Institute for Tropical Medicine and the Robert Koch Institute, it evaluates the situation and assesses the risk of an epidemic. In addition, a pool of experts has been set up for flexible deployment. The German Epidemic Preparedness Team therefore supports countries in preparing for and responding to outbreaks of disease and in taking preventive measures. GIZ coordinates the assignments, drawing on its contacts with partners throughout the world. The team was deployed to Madagascar to tackle the plague, which occurs there at regular intervals. The microbiologist Michael Nagel and his team investigated the causes of the outbreaks. A professor of geology, a bacteriologist, a field biologist, a human genetics expert and a doctor of tropical medicine made up the group of researchers from Europe who worked with Professor Rakotozandirandrainy and other experts from Madagascar. 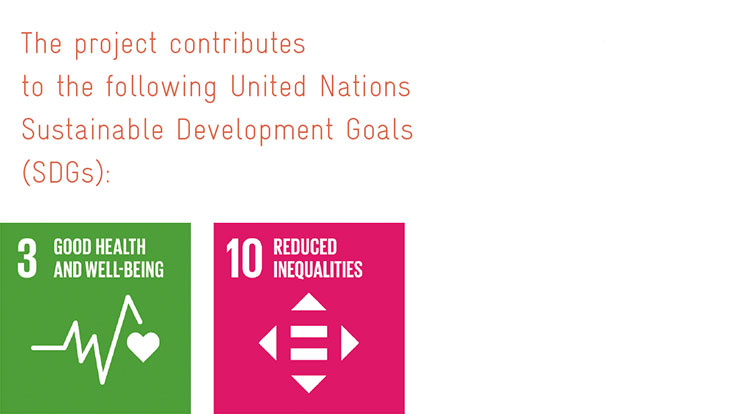