Strong digital initiatives are at the heart of this year’s GIZ Innovation Fund. akzente presents the winners and will be following their exciting journey from idea to implementation over the next few months.

As she is introducing ‘emmunize’, Sofia Nürnberger suddenly holds up a large battered paper file. Doctors and nurses in Kenya use these files to keep a record of which children they have immunised  and when. ‘It’s an inefficient and time-consuming way of record-keeping’, says Nürnberger – and drops the file on the floor with a thud. Her audience in Bonn start, but then laugh. They’ve got the message. Goodbye pen and paper – hello digital age. 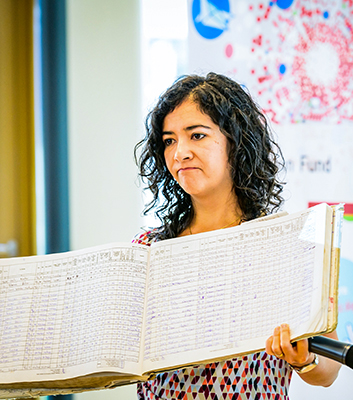 It was a message that won over the jury of the GIZ Innovation Fund 2018/19. The idea behind the Innovation Fund is to search GIZ’s wide and diverse network for innovative ideas with the potential to advance international cooperation. The competition has brought together international teams including GIZ employees and external partners. Following the successful pilot competition in 2017, more than 100 ideas on the theme of ‘Data for development’ were entered for the second round. In 2018 a panel of judges and an online in-house vote selected six ideas that were particularly promising. The teams were able to spend the next seven months developing their proposal in an accelerator programme, and the six ideas were pitched at a final presentation in Bonn. Two winners were chosen at the end of May 2019.

The nightmare of missing an immunisation

‘emmunize’ was one of the two winning ideas and was literally dreamed up by one of the winning teams. GIZ advisor Sofia Nürnberger dreamed that she had missed her young son’s next immunisation appointment, and that made her think how great it would be not just for her but for all parents to receive a digital reminder of the appointment. In 2017, 20 million children under a year old around the world did not have the full vaccination coverage they should have. The ‘emmunize’ team of seven included GIZ and external experts from the areas of medicine, local expertise, health, cold chains, and solar cooling. The Proklima programme in which Nürnberger works deals with cold chains for vaccines, among other things. For example, as part of the Solarchill initiative, she and her colleagues cooperate with partners to equip health centres with solar-powered fridges.

But even if vaccines can now be kept cool, doctors cannot be sure that parents will remember to bring their children to an immunisation appointment. Leonard Loontaye, a doctor in rural Kenya and a member of the ‘emmunize’ team, is well aware of this problem, so once a month, he loads up his motorcycle with a cool box of vaccines and heads off to remote villages. But who keeps tabs on when their child’s next measles immunisation is due? That’s where ‘emmunize’ comes in. Doctors register a child when they administer its first immunisation. Links with the national vaccination plans mean that they can then see when each individual child is due for further immunisations. Over the next few years, the ‘emmunize’ team hopes to use the new tool to reach 5,000 children. 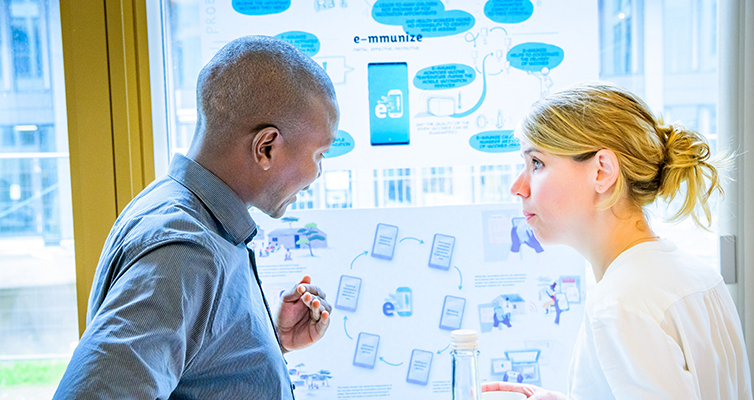 Doctors from the emmunize team discuss the project: Leonard Loontaye from Kenya and Tatiana Görhardt, a paediatrician based in Offenbach.

The judges also awarded ‘emmunize’ the Learning Journey Award. Jury member Jennifer Ahrens from the ‘Data Science for Social Good’ initiative praised the team’s willingness to ‘pivot’ and adapt their ideas. Sofia Nürnberger’s original idea was to send mothers a reminder of immunisation appointments by mobile phone, but she then discovered that many people in rural areas do not have mobile phones. The team therefore got community health workers in villages involved in reaching parents.

African versions of Alexa, Siri and other digital assistants

The second winner of the prize for the best product/service with ‘e-mmunize’, securing further business development support, was ‘Voice‘. The team brings together local and digital expertise to address an increasingly important issue – digital speech recognition. More than 20 per cent of all Google searches are already made using voice commands. Yet if a young woman in rural Rwanda wants to use her smartphone to access information about malaria using a voice command, she cannot do so in her mother tongue, Kinyarwanda. The most widely used speech recognition software uses predominantly ‘world languages’, such as Chinese, English or Spanish. Millions of people in the global South are unable to make use of the benefits of this new technology, which makes it massively simpler to access information and services. There is huge potential here for development cooperation. 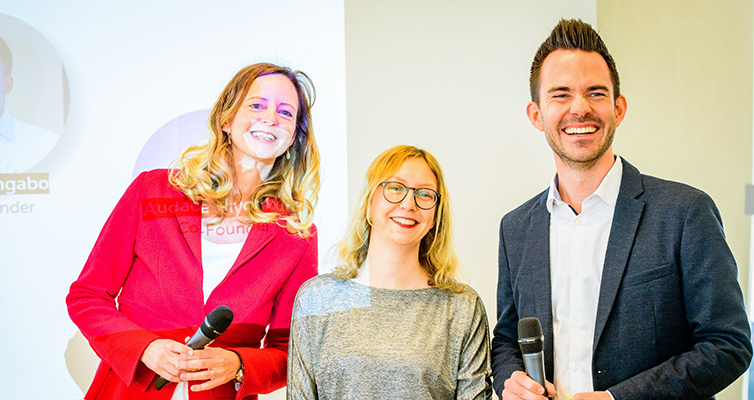 Some members of the winning Voice team: Daniel Brumund from Mainlevel Consulting and GIZ experts Lea Gimpel and Arlett Stojanovic.

‘Voice’ will therefore be gathering data in local languages. The team is cooperating with Mozilla’s Common Voice Platform: volunteers make voice recordings that Mozilla then makes publicly available. This means that voice data are not the preserve of a few large companies but become a public good. The ‘Voice’ team plans to start with Kinyarwanda, which is spoken by 12 million people in Rwanda. Jury member Jochen Quinten from GIZ said the project had won the award because, ‘Voice fills a gap: large companies see no added value in using local languages.’

The team identified ‘Umuganda’ – the day each month when the entire adult Rwandan population undertakes unpaid community work – as an opportunity to gather data. Rather than, say, sweeping the streets, the focus will be on preserving Kinyarwanda for a digital future, says Jan Krewer, who coordinates the project in Rwanda. Over the next few months, the ‘Voice’ team plans to join forces with a local start-up, ‘Digital Umuganda’, to organise a series of events during which young people can contribute the voice data the project needs.

The Innovation Fund’s Audience Award went to the Serbian recycling project ‘Yes, we CAN’. 400 people voted online or in person during the presentation in Bonn. The project is an idea for boosting recycling. The team includes a Serbian start-up that already offers users points for each can they recycle with the chance to exchange points for attractive rewards. ‘Yes, we CAN’ takes this innovation to the next level. A platform facilitates data exchange, and many stakeholders have already signed up: waste management companies and the private sector are offering incentives, while individuals return the valuable raw materials for recycling.

Over the coming months, akzente will be reporting on how the winners’ ideas are creating new momentum in development cooperation.