Simple ideas - such as running a small shop - are turning around the lives of refugees and local people in northern Iraq following the end of terror in the country.

It was a bright, sunny day in May 2016 in a small settlement near Kirkuk in northern Iraq. But that was when Mohammad Mahmood Ibrahim’s previous life came to an abrupt end. Along with six other Peshmerga fighters, he stumbled on a mine left by the terrorist organisation Islamic State (IS). Photographs of the site of the explosion show him lying lifeless on the ground, half his face blackened and plastered in blood, powder and dust. The rest of his troop rushed to his assistance and initially believed he was dead. Then the medics saw that he was still alive. The blast had killed five of his comrades; a sixth was also seriously injured.

Ibrahim spent weeks in various hospitals, where his injuries slowly healed. But nobody could give him back the eye he had lost or relieve his constant pain. The young Kurd realised that his own future and that of his family was in ruins: ‘Five of my friends were blown to pieces before my eyes,’ he says, ‘And I came home with severe, permanent injuries, no longer able to do my job as a construction worker. Despair doesn’t come close to describing how I felt.’

Ibrahim’s parents and his wife Gazung Nahro Mustafa used their savings to ensure the 26-year-old got the best possible medical care, paying out of their own pockets for medicines and operations in a private eye hospital. The money did not last long, though. Gazung Mustafa had no idea how she was going to cope: ‘I tried to survive on my husband’s war pension,’ she says, ‘but I would not have managed without the help of my in-laws.’ Meanwhile, the situation at home was becoming more unbearable by the day for Ibrahim. Continuing financial worries and his uncertainty whether he would ever be able to work again because of his injuries gnawed away at him. ‘Mostly he just lay in front of the TV in the living room all day and didn’t budge,’ his wife recalls. ‘They were dark days for us all.’

‘This shop has saved me and my family.’
MOHAMMAD MAHMOOD IBRAHIM, former Peshmerga fighter

The turning point came when Ibrahim set up a small shop selling household goods in September 2017. The shop is in the Bnaslawa district of Erbil, right opposite the town hall. And business is brisk: he earns between 250,000 and 450,000 dinars a month net – equivalent to between EUR 180 and EUR 330. By contrast, he only receives a small war pension from the Ministry of Peshmerga Affairs as the autonomous region of Kurdistan is in the midst of a severe economic crisis. The years of struggle against IS and the need to cope with millions of refugees and internally displaced persons have drained the state’s coffers. The Ministry of Peshmerga Affairs therefore particularly welcomed the opportunity to help disabled war veterans make a new start with support from the Deutsche Gesellschaft für Internationale Zusammenarbeit (GIZ) GmbH. The commissioning party for the Qudra programme is the German Federal Ministry for Economic Cooperation and Development (BMZ). The EU is involved in financing the project.

The EU Regional Trust Fund in Response to the Syrian Crisis (also known as the Madad Fund) and BMZ are financing projects in northern Iraq that can be implemented swiftly and produce rapid results (‘quick wins’) to improve the lives of refugees, internally displaced persons and the host population. A panel of representatives from various ministries and the northern Iraq Crisis Coordination Centre works with GIZ to decide which proposals will be implemented. Ibrahim and six other disabled Peshmerga veterans have benefited from one of the selected ideas. As the young man stresses, ‘This shop has saved me and my family from dark thoughts and fear for our future.’ 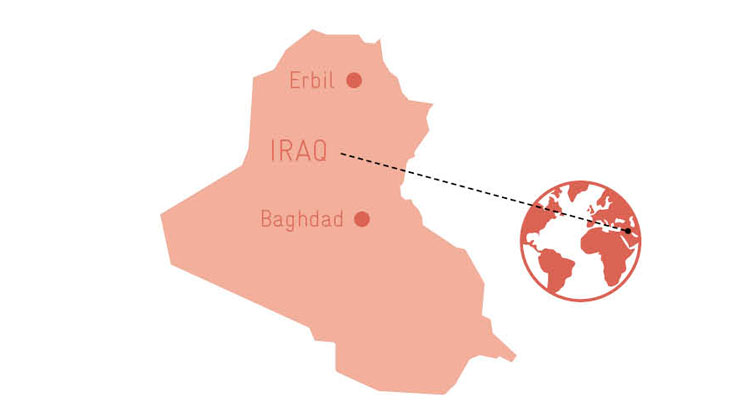 ‘Qudra’ is Arabic for ‘strength’ or ‘capacity’. The programme of the same name is being implemented on behalf of the German Federal Ministry for Economic Cooperation and Development and is improving infrastructure, livelihoods and social cohesion in northern Iraq.

Start-up capital for a new life

Ibrahim had, in fact, already been thinking about opening a small shop for some time. However, having lost their livelihood and without start-up capital, the family lacked the means to turn the idea into reality. A team from the Ministry of Peshmerga Affairs designed the shop and constructed it with support from GIZ. GIZ also put up the capital to stock the new shop with goods. Gazung Mustafa is delighted: ‘Over the past eight months, we’ve been to the wholesalers three times to restock the shop. I help my husband – I know what household goods women need. We’ve already managed to save around EUR 800, and I no longer need to worry about where the next meal for us and our two young daughters is coming from.’ The savings also mean the couple can afford Ibrahim’s next round of treatment and to pay for medicines.

Around 150 farmers and their employees have benefited from another project proposed by the Directorate of Agriculture and Livestock Production in Erbil Province. Livestock farmers who employ Syrian refugees have been given milking machines for their sheep, goats and cows. This is a boon to the 530 women who milk the animals, making their daily work considerably easier. One of them is the Syrian national Huda Ali Khalaf.

She fled to northern Iraq in 2013 with her husband Mahmood Said Hussein and their seven children. Her husband quickly found work tending Hassan Othman Pirman’s sheep. Since then, the family has lived on Pirman’s farm in Bastoora. Hussein looks after the 200 sheep and goats, and Khalaf milks them each morning. ‘I already had tendonitis and constant pain in my arms as a result of all that milking,’ she says. ‘The milking machine offers incredible relief. I no longer get exhausted milking, and I finish an hour earlier.’ Using the machine has also boosted the milk yield, as it works consistently, right up to the last animal. Khalaf uses the milk to produce yoghurt and cream cheese, which are sold at the local market.

Since mid-2016, GIZ and a wide range of northern Iraqi agencies and municipalities have successfully implemented 12 such ‘quick win’ projects. These projects alone have made substantial improvements to the lives of more than 33,000 people in northern Iraq. Both refugees and the local population benefit. The partners plan to carry out a further 46 projects by June 2019. These projects will benefit around 200,000 women, men and children. The activities are very varied and include maintenance of electrical infrastructure, construction of new roads and water mains, and expansion of a hospital. Ideas big and small are making life significantly easier for many families in northern Iraq and giving new confidence to people like the former Peshmerga fighter Mohammad Mahmood Ibrahim.