Green energy that pays for itself: how solar energy is helping power the Delhi Metro and a cricket stadium in Bangalore.

Bhagia Lakshmi loves riding the metro. Her journey from home to the office by auto rickshaw used to take the 53-year-old around two and a half hours, but since the Delhi Metro opened, her journey time has been cut to around one hour.

‘The metro is really convenient,’ says the office assistant who, like many commuters in the 17-million-strong metropolis, is accustomed to long journeys to and from work. She now has one more reason to like the metro: Two years ago, the city’s metro operator Delhi Metro Rail Corporation, which only began operating a sizeable route network in 2010, started installing solar energy systems in some stations, depots and administrative buildings.

‘Great,’ says Bhagia Lakshmi, ‘that’s even better for the environment.’ She is not alone in recognising the importance of solar power in India. With 300 days of sunshine per year, the country is one of the sunniest in the world. However, this great potential has remained largely untapped. For a long time, solar power was considered too expensive for India, where more than 300 million people live below the poverty line. The country is heavily dependent on coal to meet its energy needs. However, reductions in the price of solar energy systems have brought about a change in thinking in recent years.

On behalf of the German Federal Ministry for the Environment, Nature Conservation, Building and Nuclear Safety, GIZ is supporting India’s efforts to develop the market for solar power in metropolitan areas and industrial centres. Plans exist to install numerous photovoltaic systems and solar thermal power plants in future. The changes at the Delhi Metro Rail Corporation are a pilot project.

‘We have been interested in environmental issues from day one,’ says Anoop Kumar Gupta, Director of the transport company. From behind his heavy, brown desk, he may not look like a green pioneer, but appearances can be deceptive: it did not take much to convince him of the idea. ‘When we saw that solar power also makes good financial sense, we decided to get involved.’ The Delhi Metro is now the only metro system in the world to be powered in part by solar energy.

Since the Ministers of Urban Development and Power opened the first solar-powered metro station – Dwarka Sector 21 – in August 2014, things have moved at a rapid pace. The solar energy systems now generate around 6.5 megawatts of electricity for the metro operator. This is set to rise to 50 megawatts by 2021. This represents just under one tenth of the total energy needs of the metro, which has a 190-kilometre route network and transports around 2.5 million people per day.

‘The best part is that it didn’t cost us a thing,’ says a jubilant Gupta. ‘All we had to do was provide access to our roofs for the solar modules, and we save on electricity costs to boot.’ The solar energy systems themselves are installed and operated by six different – public and private – service providers. This was made possible by a special financing model selected with the support of German experts.

Under this model, one provider bears the cost of investing in the solar energy systems and also operates them. The metro, which only had to provide access to its roofs, buys the electricity from the provider at a contractually agreed price which is lower than that of state competitors. As a result, the transport company currently saves around 15 to 20 per cent on energy costs.

But this is not the only way to harness the financial advantages of solar power in India. The team in charge of a cricket stadium in Bangalore chose another approach which, although different, is in some respects also characteristic of modern-day India, with its dynamic private sector and strong public sector.

Brijesh Patel is the Honorary Secretary of the Karnataka State Cricket Association (KSCA). His fully air-conditioned office in M. Chinnaswamy Stadium in Bangalore offers a panoramic view of the playing field. Two rows of chairs are arranged in front of the window – they are reserved for special guests who can watch matches from here while enjoying a drink. Occupying pride of place on Patel’s desk is a giant silver cup – the Ranji Trophy – which the Karnataka state team and Patel himself during his time as an active player have won several times. Managing the stadium on a sustainable and ‘green’ basis is a new challenge for the sportsman and manager.

"We have a social responsibility"

Not that he doubts himself. ‘We invested around half a million euros in our solar energy systems last year,’ says Patel confidently. This self-confidence is not without reason: KSCA has one of the most successful teams in India. Cricket is to India what football is to Germany: the national sport and a market of millions. As well as hosting the home matches of the Karnataka state team, M. Chinnaswamy Stadium is also home to another successful team, the Royal Challengers Bangalore.

‘Cricket is the most popular sport in India. We therefore have a social responsibility and a duty to give back to society,’ says Patel. The stadium also has a rainwater harvesting system, a wastewater treatment plant and a biogas plant. GIZ supported the cricket association on behalf of the German Federal Ministry for Economic Cooperation and Development. ‘Around 30 to 40 per cent of our energy requirements are currently met by solar power,’ says Patel. The aim is to reach 100 per cent in the coming year. But to achieve this, the stadium roof will have to be modified first as only parts of it can currently support the heavy solar modules.

Electricity is also fed into the municipal grid

Like most cities in India, Bangalore does not produce enough electricity to meet its own needs. During the day therefore, when the sun is at its most powerful, the stadium feeds electricity into the municipal grid. During play in the evenings, however, production is not yet sufficient to meet increased demand in the stadium. ‘But since commissioning the solar energy systems, we have reduced our electricity costs by around EUR 60,000 a year,’ says Patel. He says that the cricket association consciously decided not to accept state subsidies for one simple reason: it would not have been able to sell its electricity to network operators. ‘Our income increases every year as a result of rising electricity prices,’ explains Patel. The dynamic manager has therefore put forward the proposal to KSCA’s Executive Committee that all stadiums in Karnataka state be converted to solar power.

A metro system and a cricket stadium – two institutions with two different approaches to harnessing the power of solar energy for a low-carbon future. Once both systems have reached their full potential, India will avoid around 60,000 tonnes of CO2 emissions. This is equivalent to the annual emissions of around 30,000 cars. 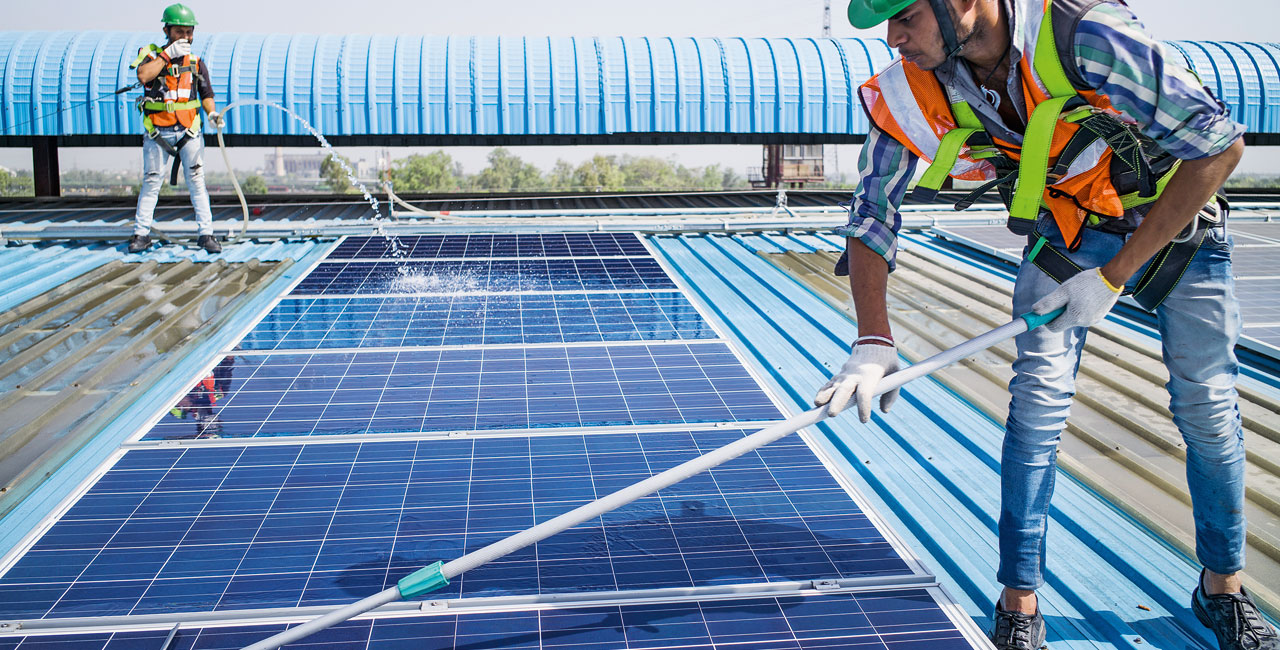 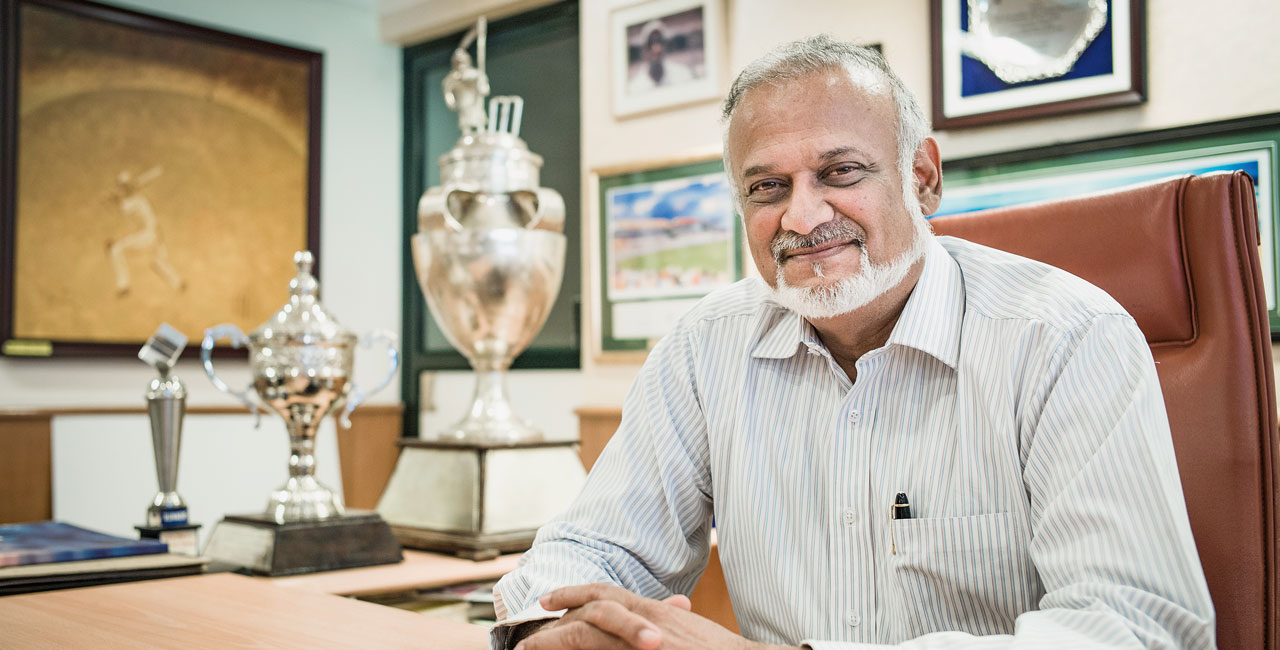 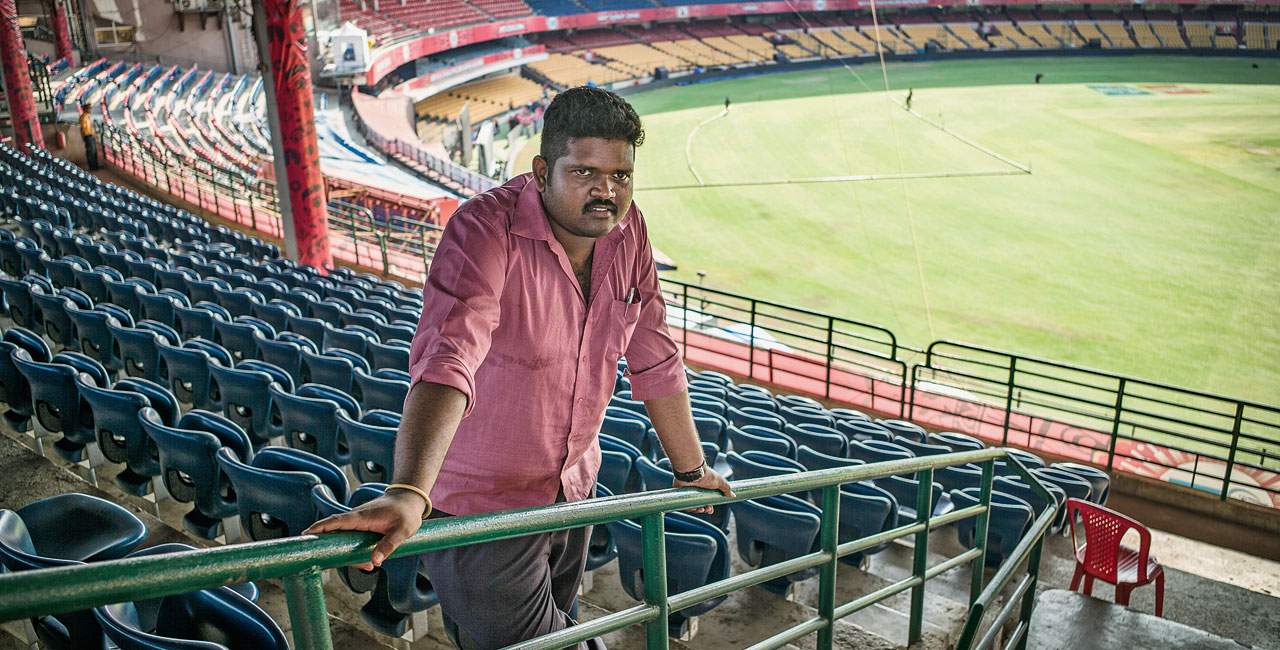 Picture gallery: Reliable and clean – the Delhi Metro transports 2.5 million people a day. Solar modules on the roofs of buildings generate more than 6 megawatts of electricity for the metro.

Looking at the two solar energy systems in Delhi and Bangalore, it is also clear why the metro and the stadium opted for different financing models. Technically, it is relatively easy to install and maintain solar modules on the edges of the oval stadium roof in India’s third largest city. But in the case of the metro, with its numerous stations, depots and high-voltage power lines, this poses a major challenge. Under no circumstances can metro operations be interrupted to install and maintain the solar energy systems. In some places, the modules can therefore only be checked, repaired and cleaned during a period of a few hours in the night when the electricity is switched off. In India, where air pollution is high, solar modules have to be cleaned much more often than they do in Germany, for example.

Under the financing model, however, this is the responsibility of the operator, not the transport company. Only 10 metro employees are involved in implementing the solar project, but according to one of them, a number of colleagues have already enquired about how they can install solar energy systems in their own villages.