They challenge stereotypes, win over men and are role models: female members of Jordan’s regional councils in action.

It takes no time at all to feel her infectious energy. Aida Al Khattab stands in the blazing sun at the entrance to the provincial chambers of the town of Ma’an in southern Jordan. When the visitors arrive from the capital city she rushes to greet them, nods to the men, and hugs and kisses the women. Aida Al Khattab is Vice-President of the council of Jordan’s largest governorate. She is the only woman in Jordan to hold this position. In August 2017, she was elected to the new council, which, like the councils in the country’s eleven other governorates, is part of the Kingdom’s decentralisation drive.

Aida Al Khattab has been actively engaged in social causes for as long as she can remember. First as a teacher of history, geography and political studies, then as a school principal, and on a voluntary basis for a number of different organisations. But it was not until 2017 that the 56-year-old took the leap into active politics. The area around Ma’an, a three-hour drive from the capital Amman, is considered extremely conservative. Nevertheless, local people called on her to stand for election – including the sheikh of the most important Bedouin clan in the area. When she meets him later near the bazaar in the centre of Ma’an, they discuss youth unemployment, one of the most pressing problems in the poorest part of the country, over a glass of tea. Her hands are never still as she talks: ‘We must find ways of bringing investment into the area. We must do something.’

Lively and energetic, Aida Al Khattab is now seeking solutions at political level. Training courses have enabled her to acquire the knowledge and the tools she needs. ‘LEAD has added a new dimension to my activism,’ she says. LEAD is a programme designed to strengthen women in leading positions in the administration and in civil society in the Middle East. It is implemented by the Deutsche Gesellschaft für Internationale Zusammenarbeit (GIZ) GmbH and is part of the German Federal Ministry for Economic Cooperation and Development’s Special Initiative on Stability and Development in the Middle East and North Africa. It aims to help countries such as Jordan drive forward democratic development. The Kingdom of Jordan, which enjoys comparative political stability, has taken in a huge number of refugees in proportion to its own population. Some 700,000 Syrians alone have sought refuge in this country, whose population has now risen to 9.5 million. The economic, social and political challenges now facing the country are enormous.

The Vice-President of Ma’an shares her new knowledge

Projects like LEAD set out to provide support for women in public life in the Middle East, so that the female half of the population is appropriately represented too. And so that their knowledge can be harnessed. These days women in Jordan are well educated, but only about 13 per cent of them work outside the home. On average, women account for 29 per cent of municipal and regional council members, while they constitute only 15 per cent of members of the Jordanian parliament.

In Ma’an, Aida Al Khattab has happily shared her newly acquired knowledge with her colleagues in the council and the administration, male and female alike. ‘Aida is such a witty person and is so committed – she passes on her knowledge in a very practical and accessible way,’ one of her staff says. He explains that when it came to drawing up priorities, she just said, ‘Imagine we’re going to the market, to the souk, and everyone has a shopping list. What we’re going to do is compare our lists, see what everybody has on their list, and that way we can identify our most important goals.’ More than 2,400 women from local councils, local authorities and women’s organisations across Jordan, Lebanon and the Palestinian territories have received the same training as Aida Al Khattab: in seminars on political education, mentor programmes for leadership and management, and public debates. They then pass on what they have learned.

A living example of gender equality

In 2017, a television and radio campaign reached an audience of four million. In the run-up to the council elections, well-known personalities explained why they were advocating for more women to be elected to town, municipal and governorate councils, and were thus advancing the cause of gender equality. When asked why he has always supported his wife, even in her political career, Aida Al Khattab’s husband Fawaz says simply, ‘I wanted her to make this dream come true. That’s what a husband and wife should do for one another, isn’t it?’ Their seven children – six daughters and a son – are now grown up. All of them have studied at university and have a job. The couple share their responsibilities, which include helping with their seven grandchildren. They are a living example of gender equality. And it seems to have rubbed off on the rest of the family. Their son pops by at lunchtime and serves up the bread to go with the mansaf, a traditional lamb and rice dish.

Families are very important in Jordanian society and conservative forces fear that women’s endeavours to achieve equality could jeopardise the unity of the family. There is no sign of that in the Al Khattab family. Aida Al Khattab sees working together as the way forward. ‘Women should fight for their own rights, but that doesn’t mean they should fight against men. They should develop together and become strong personalities.’ There is still a long way to go – not only in Jordan. ‘Change always takes time, but changes have taken place and women want to achieve even more,’ she tells us.

Jubilation as mother is elected

And that is a sentiment shared by 32-year-old Manar abu Rumman, who lives in the historic town of Salt, 250 kilometres further north. The university graduate and bank manager did well in the 2017 elections and now sits on the council of Al-Balqa governorate. She used to work for the Jordanian parliament, so politics was not entirely new to her. The training she received from LEAD strengthened her resolve to stand for election. ‘It gave me the self-confidence and the knowledge I needed for the campaign,’ she tells us. Even her daughter got swept up in her enthusiasm. On election day, the nine-year-old draped herself with a sash urging people to ‘Vote Manar!’. She was elated when her mother was elected.

2,400 women in Jordan, Lebanon and the Palestinian territories have received training.

180,000 citizens have benefited from the 26 small-scale projects implemented to date.

250 young people work for equality as part of a network. 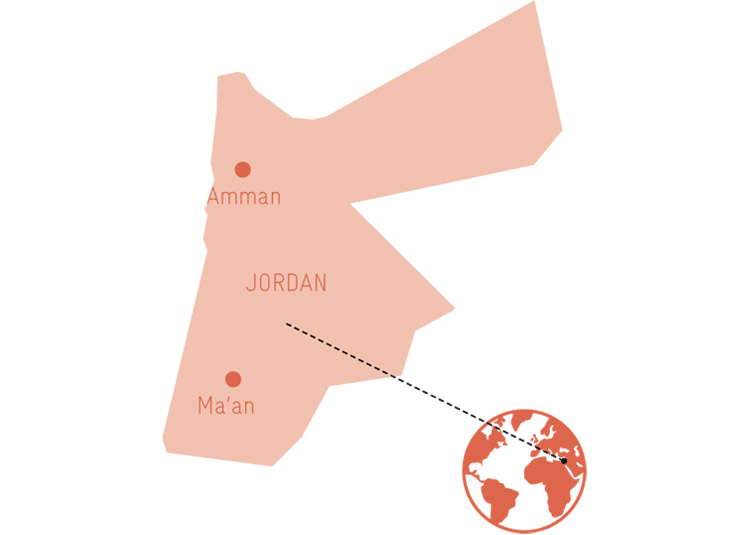 But Manar abu Rumman is fully aware that equal opportunity is far from being a given – even for the young generation. The lack of genuine prospects and the influence of extremist groups in the region have left their mark. While young women are demanding equality more frequently, a number of reports and studies point to conservative attitudes among young men. However, this is completely inconceivable for Khaldoun Shawabkeh, a 20-year-old who lives in a village south of Amman and belongs to a youth network working for women’s rights. ‘Yes,’ he tells us, ‘Women are more surprised than anybody, but stereotypes are changing.’ He relates how he met some fascinating people at a youth centre who got him interested in gender equality. He attended courses where he learned how social media can be used in campaigns. ‘I see myself as a feminist,’ he declares, ‘Because if women have equal opportunities and can contribute their knowledge and skills, we all stand to benefit – the whole of society.’

Khaldoun is in his last year of school. When he hears about Aida and Fawaz Al Khattab, who have been married for 31 years and help one another achieve their dreams, the young man beams. That’s what he would like to have in future – a strong personality at his side.

Strengthening women in decision-making in the Middle East - LEAD