No country produces more cocoa than Côte d’Ivoire. With certification and training, farmers can increase their income and cultivate their land more sustainably.

Gaston Kouassi Yao sits astride a tree stump, squinting in the morning sunshine. The 40-year-old farmer is content, and the reason for his good mood is all around him: neat rows of cocoa trees, ideally spaced two and a half to three metres apart, with a few taller trees shading the others from too much sun. He is also satisfied with his latest round of pruning, in which he removed all the branches and shoots that would not bear fruit. When a plantation is cared for and laid out according to a system in this way, it should bring the farmer a reasonable yield. 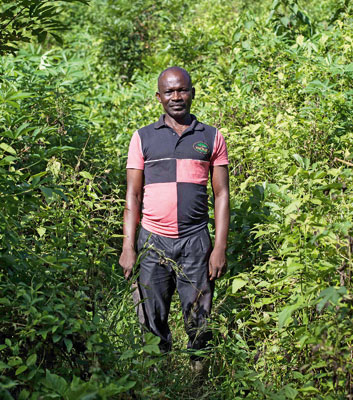 True to the family tradition – Gaston Kouassi Yao’s father was also a cocoa farmer. The son is proud to have increased the yields.

Here in Kongokro, a settlement near the departmental capital of Gagnoa, Yao owns six hectares of land inherited from his father. He runs his fingers over the trunk of one of his trees with something approaching reverence. ‘This one is over 40 years old – older than me.’ Yao is clearly proud of the cocoa farming tradition his family started here in 1954. He regrets just one thing – that his father never really had an opportunity to further his education. He never learned, for example, the importance of maintaining the plantation. ‘The soil became tired, so yields began to drop off.’ Now Yao has managed to modernise two hectares, introducing measures such as specialist techniques for pruning. He intends to do the same with the remaining four hectares as soon as possible. For this he will receive specific support.

Sharing new knowledge with other farmers

This support is provided free of charge to farmers through a project set up by GIZ on behalf of the retail group Lidl, which promotes sustainable cocoa production in Côte d’Ivoire. To achieve this, Lidl collaborated with GIZ to develop the agricultural school PROCACAO. The project also places a special focus on promoting women and strengthening biodiversity. Since 2012, the school, which is monitored by the National Agency for Rural Development (ANADER), has been teaching farmers of both genders how to handle young plants, for example, or about the benefits of a new cocoa variety named Mercedes. Along with providing seminar rooms, the school also has a large cocoa plantation where participants can put their newly acquired knowledge into practice.

Gaston Kouassi Yao has already taken part in two training courses on sustainable cocoa production organised by PROCACAO. He now passes on his newly acquired knowledge as a multiplier. Every week he teaches between 15 and 30 participants at the small field school set up for the purpose on his own cocoa plantation. Over 2,300 farmers have done the same as Yao and now share their knowledge with others. By the end of 2017 it is hoped that the project will have reached around 18,000 farmers in Côte d’Ivoire, the world’s largest cocoa-producing country.

The training courses also deal with the issue of employment. For decades, girls and boys have carried out heavy physical work in the fields instead of going to school, using machetes and fertilisers with no form of protection. In 2015, a study carried out by Tulane University of New Orleans found that cocoa plantations in Côte d’Ivoire and neighbouring Ghana employed around two million underage workers. Lidl rejects this practice and together with GIZ is committed to changing the situation. Customers are also beginning to demand cocoa grown in ways that pose no ethical issues. Lidl is now able to prove this with the aid of a label. ‘Certification means transparency,’ says Andrea Göddecke, the agricultural scientist in charge of the project.

Farmer Yao also wants to cultivate certified cocoa. He is working hard to meet the criteria for the quality label awarded by such organisations as Fairtrade and Rainforest Alliance. Another such organisation is UTZ, whose name derives from the Mayan language and means ‘good’. To gain the certification, farmers must also prove that they fulfil certain environmental standards. These include moderate use of fertilisers, which can only be spread by farmers with specialist training.

Entrepreneurial thinking, planning for the future

Yao is happy to spread the word about environmentally friendly techniques, especially when he can do so within his cooperative, which now includes over 1,600 small farmers. The cooperative system has existed in Côte d’Ivoire for decades but has been undergoing a renaissance in recent years, as it is through the cooperatives that farmers are able to obtain certification. And certification means higher incomes, since it enables a cocoa farmer to earn a premium of between USD 150 and USD 200 per tonne in addition to the price fixed by the state of around EUR 1.50 per kilo. The cooperatives – which currently number around 30 in total, with another 15 expected by the end of 2016 – also provide training courses.

In the department capital Gagnoa, Simone Pelagie Bouabre is lacing up her heavy boots. Her bag is packed, her moped stands at the ready. Today she will visit Toutoubré, a village where a little while ago she trained farmers. The 50-year-old works for ANADER, the National Agency for Rural Development. ANADER employees can also become multipliers. GIZ has already provided training for over 160 employees like Bouabre to teach farmers. And another 100 are on hand in the villages where they live to provide assistance with any issues farmers may have. Since the launch of the project in Côte d’Ivoire in April 2010, more than 66,000 small farmers have learned to adopt a more entrepreneurial mind-set and plan more for the future. The project was commissioned by the German Federal Ministry for Economic Cooperation and Development.

Toutoubré is only about half an hour from Gagnoa. Bouabre’s visits to the villages often involve a much longer and more arduous journey. In addition, many of the field schools have neither electricity nor showers. In such cases, Bouabre sleeps on a woven mat on the ground, just like everyone else. The agricultural engineer is relaxed about the prospect. ‘I’d much rather be doing this than sitting in an air-conditioned office all day.’

Bouabre never travels without her brown and dark green notebooks packed with tips and exercises, ranging from advice on reinvesting profits to healthy eating. The expert deals with around a dozen topics during each of the weeklong courses in the villages. Activities include practical arithmetical exercises, drawing up business plans and calculating if it makes sense to arrange a loan. Bouabre always explains to the farmers why something is important – for example, measuring their fields accurately: ‘In the past, many farmers didn’t even know the size of their plantations. Yet that knowledge is essential if you want to know how much fertiliser to use.’

One thing is of particular importance to the trainer – the need to encourage women to get involved in agriculture. ‘At some of the training courses they already outnumber the men. I always make them sit at the front and tell them to get involved and participate.’ Until now, cocoa farming in Côte d’Ivoire has been a male domain. And yet many women also own plantations, either as a result of an inheritance or because they sought an opportunity to invest their money in cocoa. Bouabre herself grows cocoa. ‘My parents were farmers and I had my own field when I was still at school.’ After the death of her father, she fought to ensure that the land was not simply divided up among her brothers. Her efforts paid off. ‘It is wonderful,’ she says, ‘to always be able to go back to your own land.’ 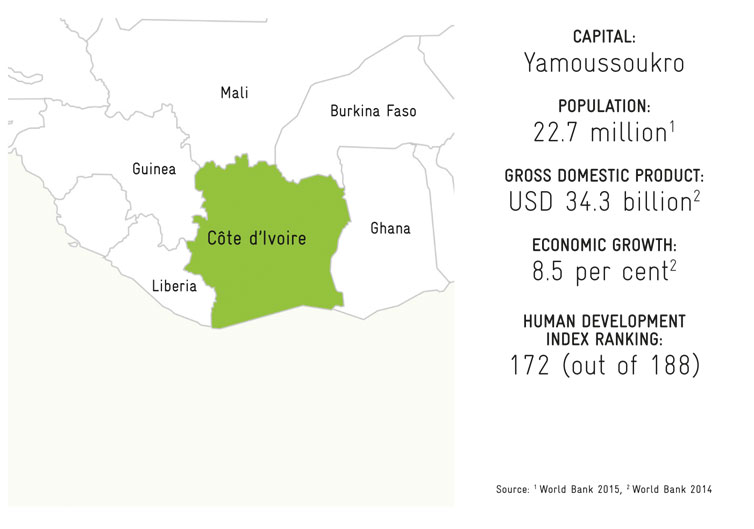 Côte d’Ivoire is the global market leader in cocoa production. Yet many cocoa farmers are unable to live from their income. GIZ is therefore committed to improving their circumstances. In addition to the PROCACAO agricultural school established on behalf of Lidl and the second project presented here, the country is currently implementing three other projects geared to sustainable cocoa production. One of these, commissioned by the German Federal Ministry for Economic Cooperation and Development, focuses on preserving biodiversity in the Taï and Comoé National Parks. The condition of the parks is crucial to successful agriculture. The project has already provided training for around 10,000 farmers. GIZ also works with the French company Touton to improve farmers’ knowledge. In collaboration with Biopartenaire, a subsidiary of chocolate manufacturer Barry Callebaut, and the French Development Agency AFD, GIZ is introducing health insurance for farmers and their families. Already 5,000 people are now insured. In addition, GIZ coordinates the Sustainable Cocoa Forum, an initiative that brings to the table the German Government, the German confectionary industry, trade and civil society.
Mehr auf giz.de: