Subject to persecution, displacement or murder, people with diverse gender identities and sexual orientations have arguably suffered more than almost any other group during the armed conflict in Colombia. GIZ is helping them to deal with their violent past and to become involved in the peace process. Four voices describe their difficult journey.

‘It was the first time I had told my story.’

‘I’ve been a trans woman since I was 28, and I love that identity. I like seeing my body differently, dressing up, colouring my hair, putting on make-up and a dress. I’ve been campaigning for the rights of diverse people like me for more than 20 years. For example, I established the Gay Pride march in Villavicencio, the regional capital of Meta. People here call me ‘Madre’ – Mother.

As a teenager, I experienced sexual violence at the hands of guerrilla fighters and then displacement and persecution. And the problems persist to this day. During the armed conflict, we knew where the threat was coming from. But now, we are often unsure who is who. The gender-diverse population still faces discrimination, stigmatisation and persecution, but we will not be intimidated. In fact, quite the opposite is true as we will fight even harder for our rights.

International cooperation is behind the improvements in Meta. The Government trusts foreign institutions. I told my story for the first time for the book ‘Construyendo Memorias’ (‘Making memories’), which is the result of workshops and training courses supported by GIZ. Years ago, I campaigned in vain for a work of this kind.

We have also produced a report for the Truth Commission and the Special Jurisdiction for Peace, so that it can open a case on the LGBT community. Cooperation with GIZ has brought us together and strengthened our organisations and contact with official agencies. Now we know our rights, and some in our community have also undergone training as managers in psychosocial support. And now we are passing on what we have learned to others.’

‘I want to change the way this country thinks.’

‘I came out when I was 16. I had peritonitis and nearly died. Before I went into surgery, I told my mother I was gay. She told me God punished homosexuals and that I couldn’t come back home. And when I left hospital, my uncle and my brother threatened me. The only glimmer of light was the small bursary that enabled me to finish vocational school. My fellow students gave me food, and when I confided in the school psychologist, she arranged a part-time job for me. That was also when I began to get involved in the gender-diverse community. Cooperation with GIZ has brought us all together: within the community – we have got to know and understand each other better. Some people are now less fearful and have found the confidence to speak publicly. We share our experiences and try to encourage others. That’s important, because the suicide rate among LGBT young people is shocking. Young people are taking their own lives because their families have rejected them and they don’t know which way to turn. Maybe I’ll become a politician one day: I want to change the way this country thinks.’

*Name has been changed

‘We’ve been inspired afresh and made new contacts.’

‘In our rural region, the gender-diverse community has always found things difficult – and it still does. There is discrimination in education and on the labour market. Many queer young people have stopped going to school because of bullying by fellow students or teachers. Families need psychosocial support so that they can learn to accept their children. And we want to train the staff of public health facilities to treat gender-diverse people with respect. These are just two of the aspects we cover in policy guidelines that we have drawn up to improve the lives of the gender-diverse community. We set up the first working group on inclusion of the LGBT community eight years ago. At the time, I was managing the Office of Social Affairs and Citizen Participation in Villavicencio. The mayor of the regional capital was an open-minded man. Back in 2010, he and his wife had joined the first Gay Pride march, setting an example in the process.

Since then, GIZ’s ProPaz programme has supported us in getting more people involved. ProPaz has strengthened LGBT organisations and informed members of their rights. It’s a great help to us as a regional government, as we don’t have the resources to do that. We’ve been inspired afresh and made new contacts right across society. It’s important to forge alliances and to get all agencies thinking about this important issue.’

‘People wept when they heard about the violence against us.’

‘I was born in an indigenous Tikuna community in Amazonas, where I was rejected because of my sexuality. In the municipality where I lived later, guerrilla fighters forced people to collaborate or join the militia. People had to do what the commanding officers said for fear of being punished, kidnapped or murdered. Later, the Army fought the guerrillas. Many people had to flee, leaving everything behind. The guerrilla fighters drove me and others away because of our sexual orientation. The state gave me no help at all – I had to get through it all alone. As part of the book project with GIZ, we were able to tell our stories for the first time and share our experiences of being indigenous LGBT victims of the armed conflict. It’s a huge step forward for us. Our families now know what we went through. People wept when they heard about the violence against us. It’s really hard recalling it all – but it’s also healing. And it has changed our lives.

I now work in indigenous communities in the region. I help them with social and health issues. I also advise people on their appearance, apply their make-up and cut their hair. And I try to help non-indigenous people, too. I am passionate about my work and put all my spiritual energy into it. Before I was elected as the LGBT representative by indigenous leaders, I visited indigenous communities. They were hostile to begin with, which is no doubt down to widespread sexism. But I think I can change that using my spiritual gifts and all my allies.’

Working for peace with all

GIZ is implementing the ProPaz II – Consolidation of Peace in Colombia project on behalf of BMZ to help people deal with the country’s violent past. It is also strengthening the rights of victims. In this context, GIZ supports individuals with diverse gender identities and sexual orientations – the ‘población diversa’ or gender-diverse population. With the support of ProPaz II, 30 reports were submitted to the Special Jurisdiction for Peace, more than ten of them with a gender emphasis and three with a focus on ethnic communities. Around 2,000 victims of violence participated directly in the drafting process and another 19,000 will benefit indirectly from the impacts.

‘They were a target for all the armed groups’ 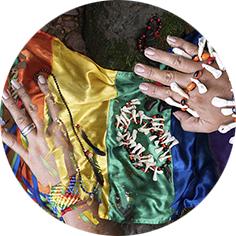 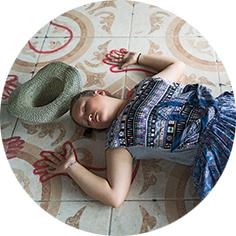 Colombia is beginning to come to terms with its violent past. Young people are seeking pathways to a better future. Germany is supporting the peace process.
More on giz.de