Living after the disaster

In April 2013, the Rana Plaza textile factory in Bangladesh collapsed, killing more than 1,100 people. Shilpi Rani Das survived but was badly injured. Rana Plaza was the worst disaster in the history of Bangladesh’s textile industry.

Shilpi Rani Das still weeps, years later. But she is determined to tell people about the dreadful day that changed her life for ever and killed 1,135 people. The 22-year-old seamstress survived the Rana Plaza disaster but was badly injured and traumatised. She was one of almost 2,500 textile workers injured in the disaster in April 2013. 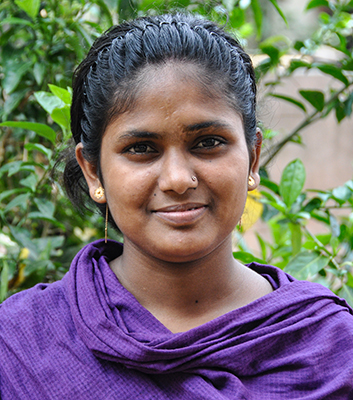 The TV pictures flashed around the world and profoundly shocked those who had given little thought to working conditions in Bangladesh when they bought a cheap T-shirt. The collapse of the building – which at that time housed five clothing factories – was a huge scandal because managers had forced employees to carry on working despite large cracks becoming visible in the building in the days leading up to the disaster. Rana Plaza became a symbol for everything that was wrong with the global textile industry: exploitation, starvation wages and opaque supply chains.

The building collapsed within just 90 seconds, and Shilpi was trapped beneath the wreckage. It took three days for rescuers to get her out. Her left arm had been crushed and one of her legs was badly broken. She spent the next two years in a series of clinics and hospitals in Bangladesh, and her left arm had to be amputated.

Six years later, the young woman is in Berlin, in a crowded room at the Federal Ministry for Economic Cooperation and Development (BMZ), where Minister Gerd Müller is welcoming her. The occasion is the official launch of the ‘Green button – we change fashion’ initiative. The event marks the introduction of the first government textile quality label, which is intended to help improve working conditions in the textile industry around the world.

Shilpi has made the long journey from her home country to recall what happened to her and the many other victims of the Rana Plaza disaster. As she speaks candidly about her terrible experiences, she makes a powerful impression. Her deep, warm voice captivates the 300-strong audience representing politics, the private sector, academia and civil society as she paints a vivid picture of what needs to be done in the textile industry to ensure that a disaster of this kind can never happen again. 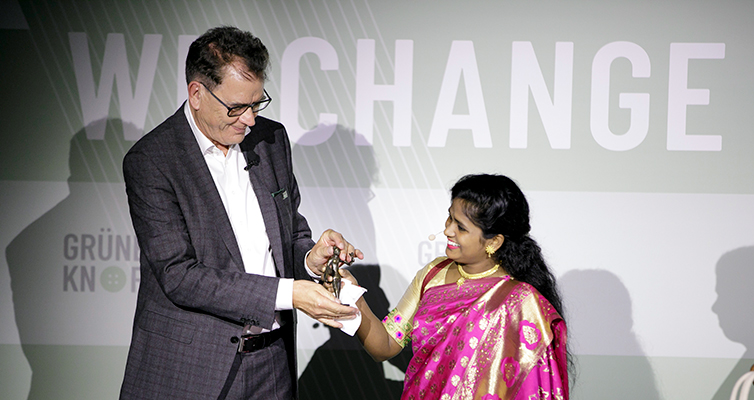 ‘This is the first time I’ve been to Europe,’ Shilpi confides later. She has never been out of Bangladesh, in fact, but she is not intimidated by her surroundings. This striking young woman dressed in bright pink radiates a natural self-confidence – she appears to be at peace with herself. A carefully draped white scarf hides the place where her left arm was.

Shilpi grew up as one of four children in a farming family. Her father was a seasonal labourer and did not earn enough to feed his family. Shilpi’s parents only had enough money to send her brother – the only boy in the family – to school. Shilpi and her sisters went to school for two years and then helped out in the household before starting work as seamstresses in local factories. Shilpi was just 12 years old when she started work, apparently putting an end to her dream of continuing her education.

She recalls, ‘Rana Plaza was the third place I had worked, and we were paid the equivalent of around EUR 35 a month.’ Shilpi was very proud of her job and of earning enough to enable her father to buy back the family’s small house from a relative: ‘That was a good time for our whole family,’ she says.

Then came the day when everything changed. Over the days before the disaster, workers could see cracks in the walls and ceilings of the building complex. ‘My mother was getting worried and didn’t want us to go to work,’ recalls Shilpi. ‘If I had listened to her, things would have been different.’ The day began like any other, ‘but then, suddenly, the building shook, as if there were an earthquake, and collapsed just a few seconds later. Everything went dark, and I had no idea if I would survive.’

Help took three days to arrive: ‘I was so scared that the entire world had collapsed, not just Rana Plaza.’

Throughout her terrible experiences, Shilpi never lost sight of her dream of a good education. The charity Meena, which was set up to help the victims of Rana Plaza and their families, supported her. In the first few years after the disaster, Meena provided financial support for surgery and treatment for badly injured workers. Now, its focus has shifted to providing initial and continuing training, creating long-term prospects. Meena provided Shilpi with a teacher, who came to conduct lessons while she was still in hospital. Farhana von Mitzlaff, who set up Meena, now works for GIZ in Dhaka. She met Shilpi soon after the disaster: ‘Learning has helped Shilpi to turn her enormous sadness into hope,’ she says.

Shilpi now lives with one of her sisters and her family. She works for Meena, earns an income and lives independently. Once she has completed 10 years of school in early 2020, she intends to go to college. Asked about her plans for the future, Shilpi says ‘I would like to become a judge and help achieve justice and fairness. I never could have imagined that one day, my dreams might come true after all.’