A model of success

High-quality training for young women can benefit an entire country. Ghana wants women to make up one third of graduates from its electronics professionals programmes in 2017.

When his phone suddenly started working again, Jaqueline Asiedu’s father was forced to abandon a long-held prejudice: that women and technology don’t mix. His 16-year-old daughter had fixed his phone. The repair would change her life. The following day, her proud father took her to an interview at the renowned Accra Girls’ Vocational Institute (AGIVOC) in Ghana’s capital. Today, she is one of more than 100 trainees on the Female Professionals in Electronics programme. 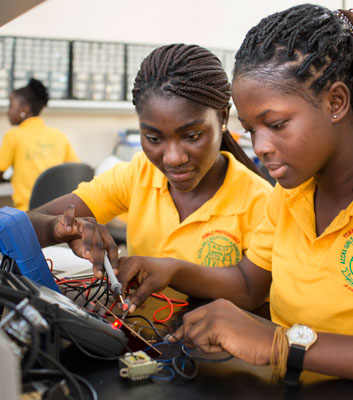 Jaqueline Asiedu and her classmate Hilda Sam carefully place the sensors of the voltmeter on the circuit. A little red lamp lights up and the needle instantly responds. The girls are thrilled: the read-out shows that they have built the circuit correctly, following the complicated diagram given to them in the workshop at their training school.

‘Some of the boys say that electronics is too dangerous for girls – they say we shouldn’t be doing it because we might get an electric shock and die,’ Jaqueline says. She and Hilda burst out laughing; they have had to listen to an awful lot of nonsense. But these self-confident young women aren’t deterred. ‘It’s quite simple: the boys are envious because later on, we will be able to get jobs they would like to have themselves,’ says Hilda. Electrical engineer with an international company, sales executive in a high-tech retail outlet, sole proprietor of a electrical shop, well-paid jobs with the police and the military – once the two young women have completed their training in just over two years’ time, they will have very good prospects in the Ghanaian labour market. 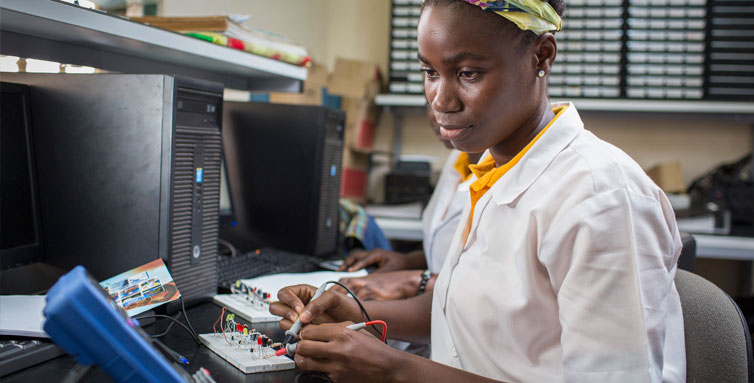 Picture gallery: Vocational training rather than working on the dangerous dump

Since oil and gas were discovered off the coast a few years ago, Ghana’s economy has been booming. Ghana is one of the few middle-income countries in Africa, and more and more people can now afford mobile phones, fridges, washing machines and air conditioning. The demand for skilled professionals for the electrical goods industry is correspondingly high – but the country’s training system is finding it hard to keep up. As a result, many international companies that are doing good business in Ghana bring in their staff from elsewhere.

In this West African country, young people wishing to enter the crafts and trades generally become apprentices to a self-styled master craftsperson (MCP). The apprentices pay training fees for as long as it takes to convince the MCP that they have learned everything they need to know. There is no curriculum and no formal exams. The theoretical aspects of the training also leave a lot to be desired. This was how Hilda Sam’s father, a car mechanic, learned his trade. He makes a reasonable living, most of the time, with his tiny car repair shop but he’ll never get a well-paid job at a branch of one of the major international automotive companies. ‘Without proper qualifications, these skilled workers who have undergone traditional training have very few prospects of finding permanent employment in the formal sector,’ says Tobias Mühler from GIZ. 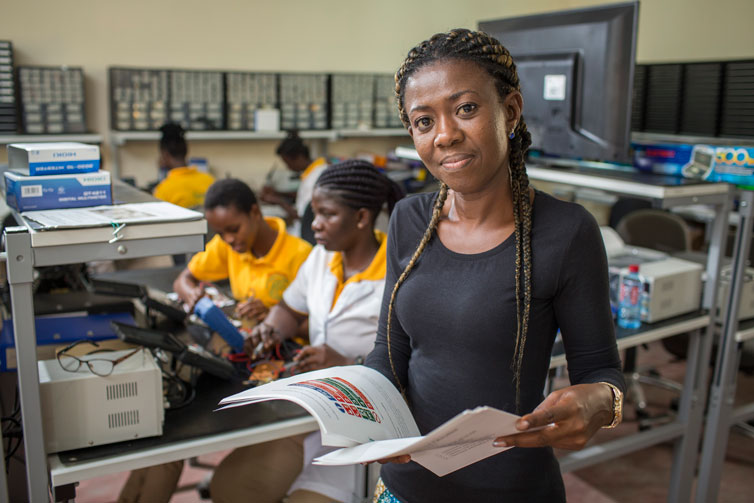 Promoting a better future for her students: Edna Boafo, head of the college in Accra.

In order to improve local people’s prospects in an increasingly demanding job market, GIZ has been coordinating a partnership between the German Federal Ministry for Economic Cooperation and Development (BMZ), technology company Samsung and the Korea International Cooperation Agency (KOICA) since 2014, working on behalf of the BMZ. With support from the partnership, the number of girls being trained at four vocational colleges has soared. The aim is to increase the percentage of female electronics graduates from around 2% in 2012 to 30% in 2017. 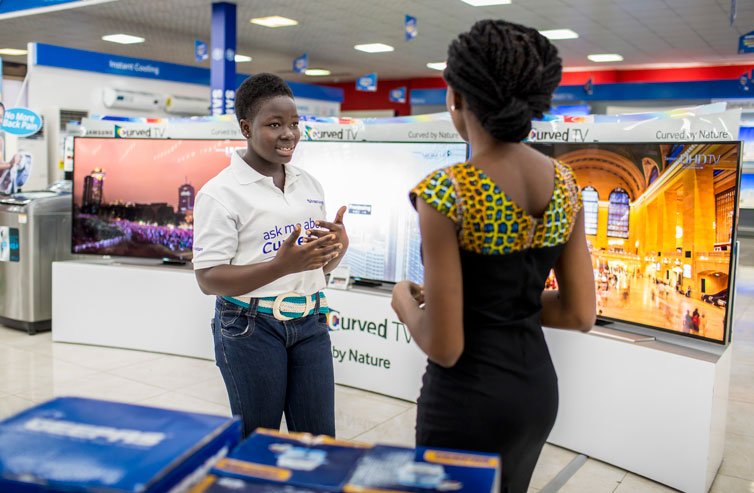 ‘Investing in girls pays off. After all, most of our students will be mothers themselves one day and they’ll ensure that their own children get a good education,’ says Edna Boafo, the Principal of AGIVOC. She herself studied in England and only returned to Accra a few years ago. ‘Our education and training system should be so good that Ghanaians who want to train for a challenging career should no longer feel compelled to leave the country,’ says Edna. And with the training that AGIVOC provides, she is keen to ensure that poorly educated girls don’t drift into prostitution or early marriage or become teenage mothers.

In the Palace Shopping Mall, one of the largest retail centres in Accra, 17-year-old Comfort Pokua stands by a massive Samsung TV – worth around 9,000 euros in the local currency – and explains its features to a customer. She is also an electrical engineering student at one of the other colleges. Her training programme includes an internship in a Samsung outlet. It is unusual to find competent customer service advisors in electrical retail in Ghana, so knowledgeable young sales assistants like Comfort are very popular with customers. ‘The girls are highly motivated and really know their stuff. So it’s a win-win-win situation for the trainees, the customers and for us,’ says Baffour Manu from Samsung’s West Africa management team.

Dangerous work at the dump

But not all the trainees will later find work in the shopping malls where Samsung tempts a growing and increasingly status-conscious middle class with the latest high-tech devices. In Old Fadama, notorious for its Agbogbloshie e-waste dump, there are countless shops selling second-hand mobile phones, computers and fridges. Many of the appliances found their way to Accra from Europe or the US and need to be repaired before they can be sold on. Anything that can’t be salvaged ends up at the dump, one of the most toxic places on Earth. 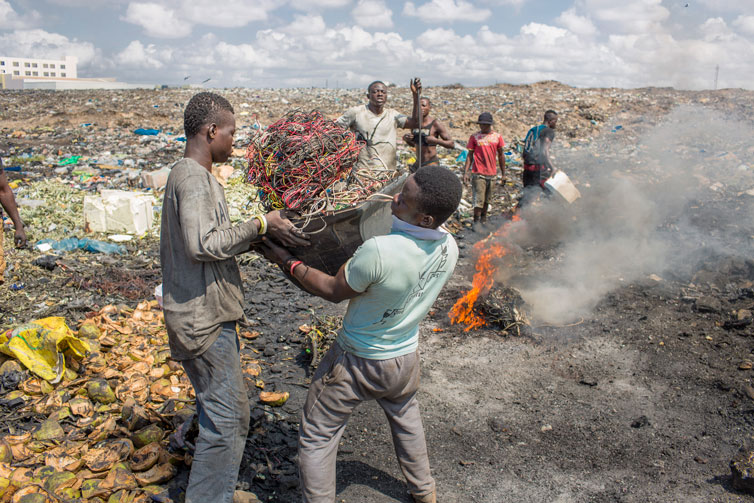 Here at the dump, young men – most of whom have very little schooling – spend their day burning cables to extract the precious metals from under the plastic casing. Most of them work without boots, gloves, protective clothing or face masks. A study conducted with GIZ’s support investigated the health status of more than 400 hundred people working at the dump or living nearby and found that many of them had very high levels of lead in their blood. What’s more, the job is so dangerous that many of the workers sustain injuries, mainly burns and cuts, on a daily basis.

When German Development Minister Gerd Müller and Health Minister Hermann Gröhe visited the dump in 2015, they were appalled – and were determined to help. On behalf of the BMZ and the state of North Rhine-Westphalia, GIZ plans to open a health centre near the dump before the end of this year. Workers will pay a small fee for a health check and treatment. In the longer term, however, the only option is to improve working conditions at the site, which are so harmful to health and the environment. ‘With the health centre, we are responding to an immediate need and laying the foundations for further cooperation in an atmosphere of trust. It is important that the people who work here understand that we don’t want to take away their jobs. We want to help them to find safe and secure employment in the environmentally friendly recycling industry,’ says Michael Funcke-Bartz from GIZ.

The electronics trainees know all about the hazards of working at the dump – and they have come up with their own solution to the problem. ‘Once we have completed our training, we will be able to repair almost anything. And that means less e-waste ending up at Agbogbloshie.’