Back on solid ground

The cracks in the walls were conspicuous, yet everyone was back working in the factory. The day before the disaster, the building had had to be cleared on account of problems, ostensibly with the electricity supply. Even then, many of those who worked at the textile factory in the Rana Plaza building began having doubts. Everything is OK, they were assured. But on the morning of 24 April 2013, the building in Sabhar, 25 kilometres northwest of the centre of Dhaka, collapsed in a heap of rubble. 1,127 people lost their lives, around 2,400 were injured. Many of the victims were extremely low-paid workers, some producing garments for German textile companies. The owner of Rana Plaza, who had illegally increased the building’s height, has since been sent to prison along with several of his managers.

GIZ actively promotes the interests of workers in Bangladesh’s textile industry. On behalf of the German Federal Ministry for Economic Cooperation and Development (BMZ) and the C&A Foundation, GIZ has been working since 2009 with ministries and authorities in Bangladesh and companies, trade unions and non-governmental organisations to guarantee fair wages for workers, and to establish codetermination opportunities and compliance with labour, safety and environmental regulations. 18.5 million euros are available for this purpose until 2017. The project receives financial support from the EU. 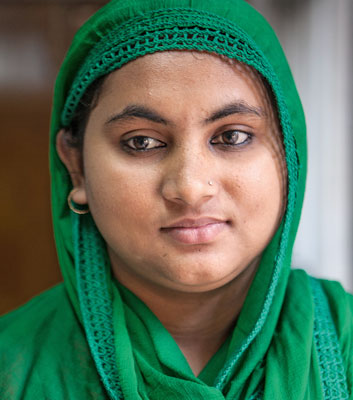 BMZ also contributed a further 2.5 million euros immediately after the disaster to help those affected. Assistance was also provided to those no longer able or willing to work in a textile factory and with an interest in becoming self-employed. Applications were received from over 520 men and women; these applicants subsequently took part in a variety of courses over several weeks. Here they learned how to run their own shop, use a computer or set up business as a tailor or dressmaker. Most of them now have successful small businesses, says Bettina Schmidt from GIZ, which range from keeping dairy cattle or owning grocery stores to running a mobile phone business or a tailor’s workshop.

One of these business start-ups is owned by Runa Akhter, who was sitting at her sewing machine on the seventh floor of the Rana Plaza building when the floor gave way beneath her. She found it difficult to come to terms with what happened: she spent six hours waiting to be rescued; buried with her in the rubble was a young girl, who died later. 25-year-old Akhter suffered a badly broken arm. But the long physical scar is not her only reminder. ‘Even now, I get panic attacks when I think about what happened.’

Retraining also made a difference financially

And yet just two years on, this woman with friendly eyes and a sparkling nose piercing can look to the future with optimism. After her time in hospital, she was sent to a rehabilitation centre in Dhaka, where in addition to receiving further medical and psychological treatment, she attended the course that enabled her to switch jobs. Now she owns a small store. She sells rice, sugar, cakes, cola, water and other everyday necessities. Her brother lends a hand. The shop is open seven days a week. But is it not all a lot of stress? Akhter shakes her head. ‘Sure, in the factory we worked regular hours from eight until five o’clock, sometimes until eight in the evening with overtime. But now I’m in charge. My brother and I take turns.’

And business is good: Akhter turns over up to 4,000 taka (around 45 euros) every day. She pays a monthly rent equivalent to around 20 euros and about 10 euros for electricity. Her profits at the end of the month amount to approximately 10,000 taka – about 115 euros. Her last pay packet at the textile factory was equivalent to 89 euros.

Following a fire-related disaster at the Tazreen Fashions factory in 2012 and the collapse of the Rana Plaza building in 2013, BMZ expanded the funding it provides to improve social and environmental standards in Bangladesh’s textile industry. Victims now additionally receive support in the form of medical, psychosocial and professional rehabilitation. The funding is also used to help reintegrate those forced to live with physical disabilities as a result of the disasters into the labour market.

On that fateful day, Munnaf Khan, who also worked for a textiles company in the Rana Plaza building, fell from the seventh to the first floor. Today, the father of three children can barely climb stairs and he has only limited use of his left hand. Like Akhter, he is sure of one thing: ‘I never want to work in a factory again.’

Today, Khan is a small businessman – in the textile industry. Under his previous employer he had worked his way up, becoming responsible for producing samples. So at the rehabilitation centre he consolidated his knowledge by taking a course in tailoring and learning how to become self-employed. Now located near the site of the former Rana Plaza building, his company is called Etcetera Tailoring. It was funded out of Khan’s state compensation, equivalent to 959 euros, and a payment of 450 euros from textiles chain Primark. The rehabilitation centre provided a sewing machine.

Khan now owns five sewing machines and has five employees. His customers ask him to create typical Bangladeshi clothing: brightly embroidered dresses for women, long white shirts for men. He pays a reasonable wage, Khan assures us. Allowing for rent and electricity costs, he takes home 15,000 taka at the end of the month, equivalent to almost 180 euros. ‘Even if I work harder than before, I have more freedom as an entrepreneur.’ His aim now is to expand his business, although he lacks the necessary capital at present. ‘I don’t want to take out a loan. I want to remain independent.’