New refrigerators help entrepreneurs and enable Mexico to achieve its climate targets. Germany is supporting Mexico with its climate policy.

Salvador Morales is proud of his sugary cream cakes decorated with a red, light blue or green glaze and candied fruit. The owner of the small grocery store in the Mexican town of Toluca goes to the head-high refrigerated display containing the colourful treats and carefully lifts down a red one. ‘These are very popular,’ he says.

Cream cakes must be kept well chilled. ‘Otherwise they quickly go bad,’ Morales explains. He knows his business: he once owned a bakery in this street, which he has now turned into a small supermarket selling a wide range of produce. But chilling his cakes requires a lot of electricity because he displays them in an open chilled cabinet that is already over ten years old. Morales knows that the cold air generated at great cost simply spills out of the open refrigerated units stacked one on top of the other. ‘It really isn’t very efficient.’ 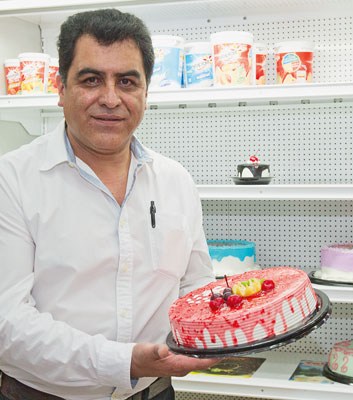 As in many shops in Mexico, Salvador Morales’ cakes were displayed in energywasting open refrigerated display cabinets until now.

Rather more efficient, on the other hand, are three new chilled display counters, the latest addition to the twelve units in his store. They form the focal point of his business: this is where customers wait to be served, where Morales and his staff sell chilled foods. Yoghurts and milkshakes are displayed behind a glass door – for improved insulation. Since Morales had his old refrigerated cabinets replaced a year ago, the electricity he uses in his store has been cut by one fifth.

Morales’ electricity bill accounts for over a quarter of all overheads – for the refrigeration, lighting and computers in his store, which employs around 35 staff. But the shopkeeper would never have been able to switch to cost-saving refrigerated units without some assistance. The investment involved was simply much too high. A chilled cabinet costs around 30,000 pesos, equivalent to around EUR 1,800 – an impossible sum to finance on such slender profit margins. Then one day a man came into Morales’ store and told him about a state programme that issued loans to small and medium-sized businesses to upgrade refrigerated appliances, air conditioning and lighting systems. ‘I found the idea interesting and agreed to try out three new units,’ Morales explains.

The new chilled cabinets are miracles of efficiency compared to his old units. Electricity consumption is so low that the savings accumulated over just four years are enough to refinance their acquisition. After that, the new refrigerators will belong to small entrepreneurs like Morales – who from that point on will be saving real cash. The programme behind all this was developed by GIZ on behalf of the German Federal Ministry for the Environment, Nature Conservation, Building and Nuclear Safety in collaboration with relevant Mexican ministries and several companies, including state energy providers.

Alexandra Garcia, one of Morales’ employees, is responsible for keeping the books. She produces the electricity bills she receives every two months. In 2012 the monthly bills came to 25,000 pesos. During the first year of the refrigerator replacement programme, payments fell to 24,800 pesos. ‘But 5,600 pesos of each bill counted towards repayment of the loan,’ Garcia explains. In three years those repayments will cease. ‘Then the fridges will be paid for and we will spend a lot less – and it’s also better for the environment.’ 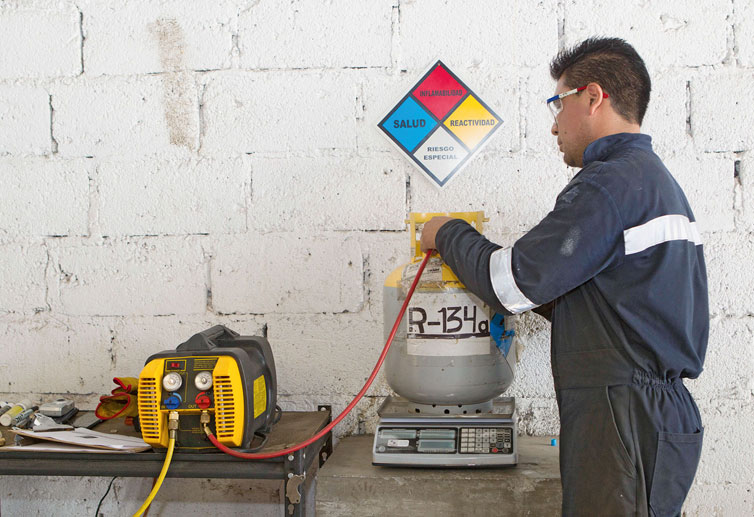 Ricardo Mendiz, who works in a disassembly workshop, recovers CFC gases from an old refrigerator.

Ernesto Feilbogen from Mexico City coordinates the programme for GIZ and knows of many small businesses that have benefited. For example, the barkeeper in Hidalgo who was probably saved from bankruptcy by the electricity savings. Feilbogen remembers how Armando Villalobos, the owner of ‘Las Palomas’ bar, told him: ‘Our energy costs were so high we were at risk of going under.’ Today, after replacing his refrigerators, Villalobos saves over one third on electricity bills, equivalent to around 816 euros each year.

Feilbogen can back up the success stories with hard figures. By the end of 2013, within the space of about a year, almost 6,000 appliances had been upgraded. A system set up by GIZ to measure the reduction in greenhouse gas emissions showed that this campaign had prevented around 9,000 tonnes of CO2 emissions. ‘The potential for savings is enormous,’ says Feilbogen. As an emerging economy, Mexico has 5.1 million micro, small and medium-sized enterprises which lack the capital for investment in modernisation. ‘The country is full of Salvadors and Armandos,’ says Feilbogen. 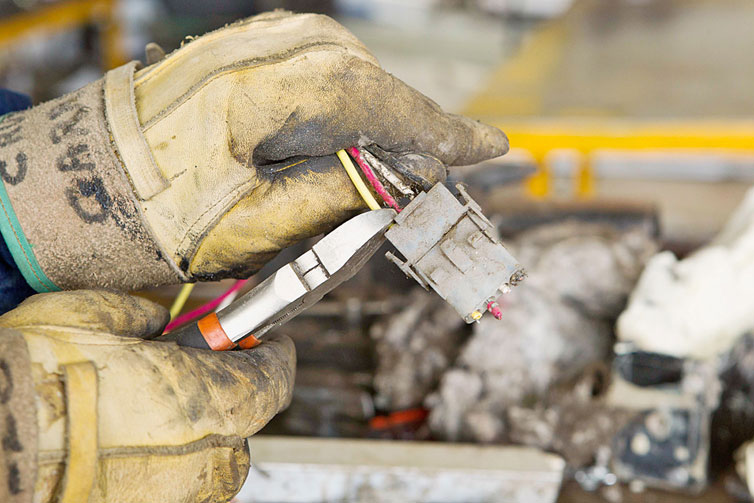 An end-of-life refrigerator is carefully disassembled into its individual parts.

Germany is supporting Mexico with its climate policy. In 2010, the German Federal Ministry for the Environment, Nature Conservation, Building and Nuclear Safety and its Mexican counterpart set up the Mexican-German Climate Change Alliance. Since then the country, which has a population of more than 122 million, has set out ambitious climate targets – the most ambitious of any of the world’s emerging economies. In 2012, for example, Mexico introduced legislation which aims to cut greenhouse gas emissions by 50 per cent by 2050, as measured against the base year 2000.

Efforts towards energy efficiency did not start from scratch

But if the country is actually to achieve these objectives, the instruments for steering, planning and monitoring climate change mitigation activities will need to be made more effective. The German Federal Environment Ministry is therefore supporting Mexico with developing voluntary climate protection measures, or NAMAs (Nationally Appropriate Mitigation Actions). The concept was established at the 2007 Climate Change Conference in Bali and targets countries like Mexico which are not subject to any CO2 reduction commitments as part of the UN Framework Convention on Climate Change. It also enables industrialised countries to finance these voluntary climate change mitigation actions or provide support by means of technology transfer.

Mexico’s efforts to improve energy efficiency did not start from scratch, however. Several years ago a programme was introduced offering private households the chance to exchange old refrigerators for new ones. Around two million appliances were replaced. Nevertheless, despite the impressive success in reducing CO2 emissions, getting individuals to upgrade appliances is not as easy as it might seem. The reason is that Mexico’s Government heavily subsidises electricity prices for private households. ‘That’s why businesses benefit more quickly from replacing energy-inefficient appliances, because they have to pay much higher electricity prices by comparison,’ explains Feilbogen.

The replacement programme attaches great importance to disposing of old refrigerators in an environmentally friendly way. Every effort is made to ensure that these energy-wasters are removed from the market and do not reappear for resale. Furthermore, all chemical refrigerants used in the appliances – including the climate-damaging chlorofluorocarbon R134a – are disposed of correctly and any metallic components recovered are sent for recycling.

The supplier of the new refrigerator only receives payment for his work after submitting an appropriate confirmation from a certified disassembly plant. The significance of this approach is highlighted by Ricardo Mendiz, who works at a disassembly plant in Toluca. ‘The old refrigerators are usually collected by scrap merchants,’ the young man explains. ‘And since they are only interested in scrap metal, they simply let the refrigerants escape.’ If that happens, the gases go straight into the atmosphere and become climate-killers. ‘That’s something we have to prevent at all costs,’ says Mendiz emphatically.

Business owner Morales is so impressed with the refrigerator programme that he is now planning to replace the rest of his old appliances. Even if that means his cream cakes will have to sit behind a glass display case, Morales is sure his customers will not be put off buying his brightly coloured sugary treats. 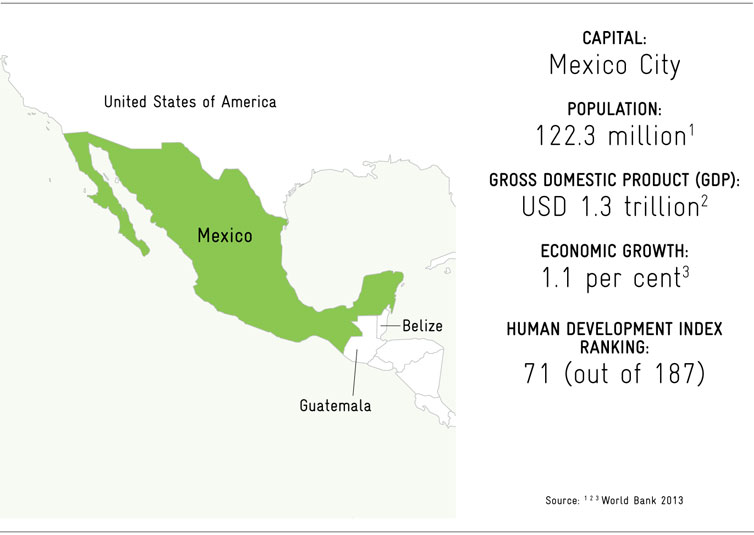 FOR ENTERPRISES AND ENVIRONMENT

Mexico’s many small roadside stores are filled with the familiar buzz of old refrigerators. The owners face high electricity bills. Now, thanks to a system developed jointly with GIZ, small entrepreneurs can save both energy and overheads – by seizing the opportunity to replace their old refrigerators, lighting systems and air conditioners with energy-efficient appliances. The special feature of the arrangement is that entrepreneurs are given a 10 per cent price reduction and then pay for new appliances with savings on electricity. After four years at most, the appliance becomes the property of the business. For entrepreneurs, the scheme involves a one-off investment that pays for itself. For nature and the environment it means fewer emissions.
Mehr auf giz.de: