Lawyer Nicholas Opiyo is a champion of democracy in Uganda. Despite some setbacks, he sees signs of change in the country.

Nicholas Opiyo is a beacon of hope for democratic development in Uganda, something he works untiringly to support. His dedication has brought him several accolades, including the German Africa Prize. Since 2005, the Ugandan human rights lawyer has been using legal means to fight for civil liberties in the African country. He founded Chapter Four Uganda; a not-for-profit organisation that takes its name from the fundamental rights and freedoms enshrined in chapter four of the Ugandan constitution. It is dedicated to protecting civil and political rights, civil society and promoting human rights in Uganda. Chapter Four represents people from especially marginalised groups, such as LGBTQI people, in courts of law and aims to challenge discriminatory laws and practices. In 2014, Opiyo joined other civil society organisations and leaders to bring a case before the Constitutional Court of Uganda that overturned the Anti-Homosexuality Act, which prescribed the death penalty in certain cases. In an interview, the 39-year-old talks about the autocratic conditions in his home country and why the rule of law is important for development. 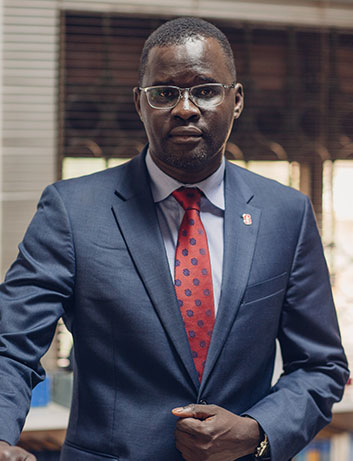 At present, Western media focus mostly on the intolerance towards gay men, lesbians and other sexual minorities in Uganda. Are other sections of society also subject to repression?
Right now, we’re seeing a continuing shrinking of civil space and an assault on civil society overall for the establishment in Uganda. The state is becoming increasingly intolerant of the political dissent/opposition, the press and civil society organisations. But the LGBTQI community is being hit harder than other groups. A non-governmental organisation will find itself facing repression by state forces in the worst case. Gay and transsexual people, on the other hand, suffer attacks from communities, families and those close to them or who live in their neighbourhood. In fact, they have to fear for their lives each and every day.

What is behind the latest wave of repression?
The elections in 2021 are already casting a long shadow. This time the majority of members of parliament are worried that they might not be re-elected because they abolished the upper age limit on candidates for the presidency. Now President Yoweri Museveni can remain in office for the rest of his life – against the popular will of most of the population. In order to deflect the resentment among the general public and to unite potential voters in hate, a great many politicians in the ruling party are now stirring up intolerance of LGBTQI people. They are, as always, looking for political scapegoats to deflect from their failures and retain public office.

Will this campaign come to an end after the elections?
Unlikely. Firstly, the homophobic rhetoric used by political and religious leaders will continue to have an effect – and it has been shown that such language generates more physical violence. Secondly, civil society’s room for manoeuvre has been shrinking not only in the run-up to the elections, but also over the long term. The longer Museveni remains in power, the more repressive the political system becomes.

Can you give an example?
New, repressive laws are being passed all the time. Last year, 16 new regulations for the Communications Act came into force, which further curtail the freedom of the press and freedom of expression. The state can now take over radio stations and punish authors of ‘offensive’ posts on social media.

An index maintained by the Bertelsmann Stiftung recently downgraded Uganda from a ‘defective democracy’ to a ‘moderate autocracy’…
A moderate autocracy? I don’t know what that means. I’ve sometimes wondered what all these democracy indexes actually measure. As far as I see it, in Uganda we’ve already been living in a genuine dictatorship for a long time.

Are you not overestimating the power of the state? And there is civil society participation.
We have observed that the army is occupying more and more areas in society. The army distributes seed to farmers, and the army controls immigration, the collection of taxes and the police. On my way to work I see heavily armed soldiers standing around everywhere. And as to participation, I think that if you belong to the opposition or you’re an LGBTQI person, things certainly don’t look that rosy.

Are there also positive developments?
Definitely. For example, we’ve ended the armed conflict in the country. We’re going to start producing oil soon. And tourism is booming thanks to the peace and stability in the country.

And what about your field of work? Has there really been no progress at all?
There certainly has been. It makes me happy to help even just one single person in my work as a lawyer. And we should also note that the LGBTQI community is getting stronger all the time. Ten years ago, no-one spoke in public about being gay. Now the debate has really taken off. The tone may be rough, but it’s great that the debate is taking place at all. This is the beginning of a change.