Medications at the touch of a button

A South African-German partnership is breaking new ground by giving people with chronic illnesses easy access to essential medicines: the pharmacy of the future operates almost like a cash machine.

‘Back in 10 minutes’ reads the cardboard sign that a food stand owner hangs on his stand in Johannesburg's Alexandra Township. He then dashes across the street to pick up his medicines from a nearby shopping centre. He had received a text message on his mobile phone to remind him that his vital medication was ready to collect. 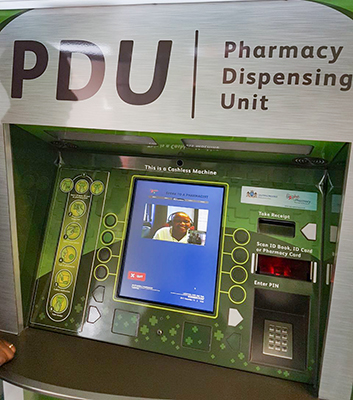 A pharmacist communicates with the customer via video link.

He used to have to drive to the hospital every month, wait in a queue for hours and was unable to work, costing him one day’s income. And he wasn’t even sure that the medicines he needed would be still be in stock when he got to the front of the queue. Extremely long waiting times are commonplace in South Africa’s clinics, as the country’s health care system is completely overstretched. With a population of around 56 million, the country does not have enough pharmacies, hospitals or doctors to serve its 20 million chronically ill patients.  These people are living with diabetes, asthma, cardiovascular diseases or HIV. More than 7 million people in South Africa - almost 13 per cent of the population - live with HIV. The South African Government provides a special combination of medicines free of charge to suppress the virus, so that patients can live a largely normal life. But they first need to be able to access this anti-viral medicine easily and take it on a regular basis.

Since 2017, new pharmacy dispensing units (PDUs) have made it quick and easy for people living with chronic illnesses in the Johannesburg metropolitan area to get their prescriptions.  This innovation is the result of a partnership between the German pharmacy automation solution provider MACH4 and Right e-Pharmacy, the commercial arm of the South African non-governmental organisation Right to Care.  The Deutsche Gesellschaft für Internationale Zusammenarbeit GmbH is coordinating this project as part of the develoPPP.de programme. The German Federal Ministry for Economic Cooperation and Development is promoting private sector involvement in areas where business opportunities and development policy initiatives overlap. 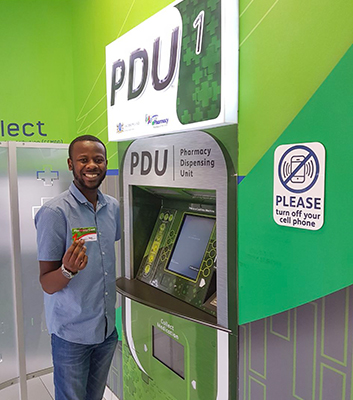 A pharmacist at the medicine dispensing unit.

Patients can now pick up their prescriptions from 16 PDUs installed in four shopping centres in three heavily populated Johannesburg townships. Around 25,000 people have already made use of this service. Their waiting time for picking up medications has decreased from several hours to less than five minutes. The number of patients now receiving expert advice has also risen by 79 per cent. Pharmacists at a central call centre are on hand to answer questions and resolve any problems - something that is not always possible at clinic dispensaries.

As simple as a cash dispenser

The new medication system is simple. Registered patients use a special chip card to log in on a compact machine located behind a privacy screen, just as they would with a cash machine. Remote pharmacists appear on the display via a video link to the advice centre and, after verifying data, they ask the patient about any health problems. If everything is okay, a robotic arm moves the required medication from a repository to a conveyor belt. A personalised label is then added to the medication. It is checked via a screen and then handed out using the dispensing tray. Customers are also issued a receipt showing the date for their next collection. They also receive a text message reminder. PDUs are regularly stocked with medicines. Their location in shopping centres and regular restocks help to protect machines against break-ins.

Back at the machine in Alexandra, the food stand operator reaches into the dispensing tray and takes out his pills, walks back across the street, takes down the cardboard sign and reopens his stand just a few minutes later. 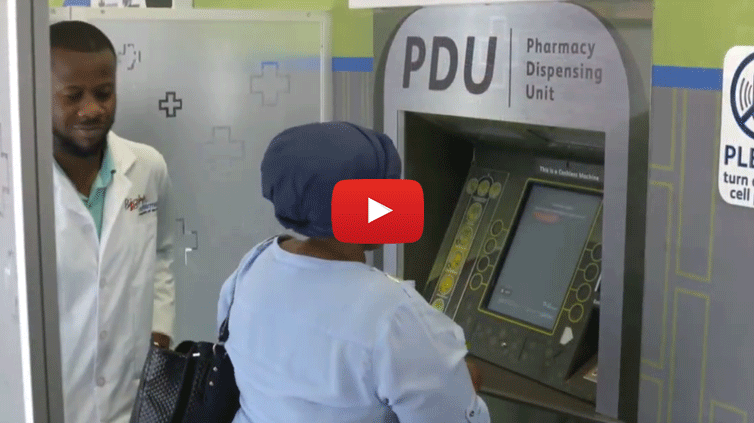